Daniel Teh was once a troubled teen. But coming to City Harvest Church transformed him into a social entrepreneur who employs the disabled to run his restaurant Pope Jai Thai. 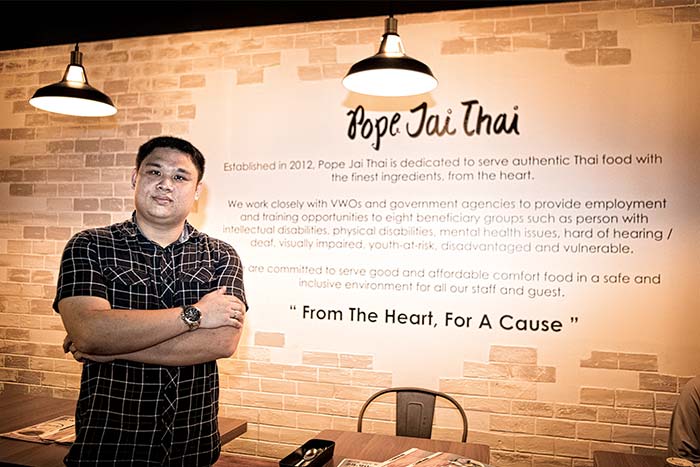 “I believe I made it because of Pastor Kong Hee’s teaching. When he preached that we must ‘find a hurt and heal it, find a need and meet it’, it went into my heart.”

Daniel Teh, 29, is unabashed about his faith and his church. “My roots are in City Harvest, these are my fruits,” he says of his work. “I’m not afraid of saying I am from CHC.” He acknowledges that, sometimes, the reactions to that fact are less than favorable.

Teh runs a Thai restaurant at Scape called Pope Jai Thai. The name means “comfort heart” in Thai, and the business’ tagline is “From the heart, for a cause”. That’s his interpretation of “find a need and meet it”. Pope Jai Thai currently has a staff strength of 30, 90 percent of which are people with disabilities.

Coming from a troubled background where he had to fend for himself from a young age, Teh experienced a transformation at CHC. “I always anticipated going to service—I never forgot to attend service at Jurong West,” he recalls. “It was at CHC that I was first mentored, by my cell group leader Marlin Xu. She believed in me.”

The former gang member first came to City Harvest Church in 2000, when he was 13, a Normal Technical student at Montfort Secondary School. He left school after his ‘N’ Levels—he had already been working at Kentucky Fried Chicken while studying, and was even made manager. 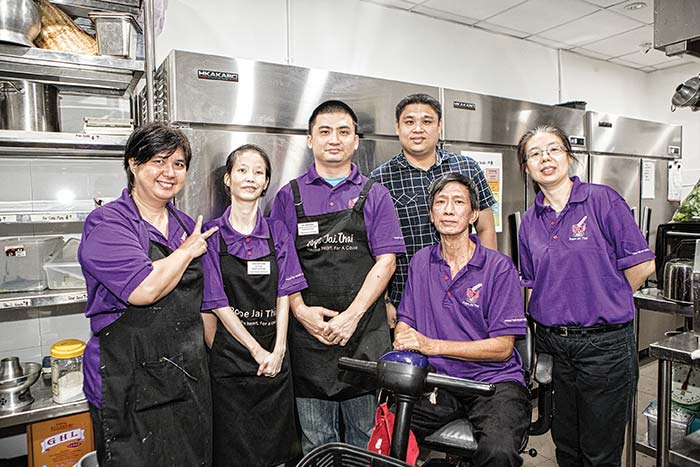 Teh with some of his kitchen crew.

“Someone told me to go and further my studies, that KFC was a stepping stone,” he says. He heeded that advice, and enrolled into SHATEC (Singpoare Hotel and Tourism Education Centre) after national service, where he enhanced his culinary and food business management skills. He then joined the St Regis Singapore as a commis chef, finetuning his expertise. Teh became a chef at Mandarin Orchard hotel for two years following that, before leaving the hotel industry to work for Thai Express as a customer manager. “I was promoted to area manager in less than a year,” he remembers. “I was 23 and making a reasonable income every month.”

While others might have been content to stay in that comfortable position, Teh wanted to do more. “I looked for Elim Chew when I was studying at SHATEC,” he recalls. “I wanted to find out more about running my own business. At the time, Elim was a board member of ACE (Action Community for Entrepreneurs) and she encouraged me to sign up for ACE.” That one meeting with Chew springboarded Teh into business ownership.

In 2010, with two partners, Teh set up his first restaurant a Thai restaurant in Kim Tian Road. The restaurant flourished, winning fans among food reviewers. But less than a year later, his partners decided to part ways with him as they disagreed with his idea of running a social entreprise instead of a profit-only business.

Undeterred, Teh started Pope Jai Thai by himself in 2012. His first location was at Pearl Centre—but high rentals drove him to look elsewhere. “I tried Jurong West, but that failed,” he says. “I didn’t study the market well.”

Finally, Teh was offered a location at Serangoon Avenue 3 in early 2014. “The rental was not cheap, though it was a dead town,” he says with a wry smile. His entrepreneurial spirit could not be quenched: Teh and his staff—he had begun hiring the intellectually-disabled and the deaf by then—built up the restaurant over the years, growing a loyal customer base by extending delivery services to nearby offices. The quality of the food at Pope Jai Thai was a definite factor in its success.

But as it panned out, Pope Jai Thai’s location at Serangoon had to be vacated this year due to a hike in rental. For the second time in his life, Teh called Elim Chew. Though the two had met just once before, Chew saw that Teh was an entrepreneur who made full use of the advice he received. With her help, Teh secured a space at Scape—right across from Chew’s family restaurant I M Kim Junior. 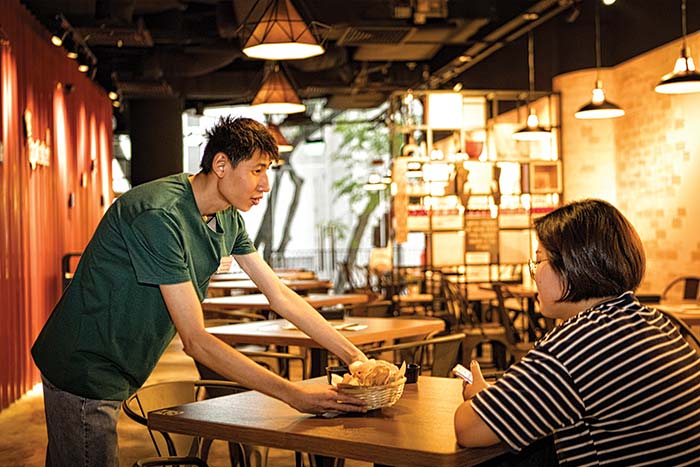 A Kitchen Fit For Them

Commercial kitchens have one common factor: they’re small and maximize use of space. In some, there is barely space to stand. Pope Jai Thai has the complete opposite: its kitchen is spacious, the walkways wide enough to accommodate a wheelchair. Stations are spaced out, each clearly labelled. The refrigerator is filled with clear boxes containing meats, seafood, vegetables, condiments, each one labelled. Printed instructions—in large print— with diagrams or photos are placed at eye level. The whole place is spotless.

Teh proudly shows off the extra-large, low sink with an extendable faucet on the left. It was custom-built for Uncle Poon, Pope Jai Thai’s left-handed dishwasher-cum-deliveryman who goes everywhere—even into MRT stations and to office buildings many kilometres away from Scape—on his mobility vehicle.

We meet Tay Ann Shun, who is intellectually disabled. Teh has customized kitchen tools for Tay, including a unique “chopping board” with nails set at equal intervals to enable Tay to cut long beans to equal lengths—a task he performs with relish.

The kitchen and the restaurant was fitted and furnished with the staff in mind. Teh also has a deaf server who doubles up as cashier. To facilitate customer-staff communication, placards are placed at the tables with diagrammatized instructions on how to order “chicken”, “pork” and other food items using simple sign language.

Pope Jai Thai succeeds in enabling these staffers and according them dignity. Interactions between Teh and his crew are filled with mutual care and concern.

Currently, Teh hires across eight groups of beneficiaries: those with intellectual disabilities, physical disabilities, mental health issues, the deaf, the visually-impaired, youth-at-risk, the disadvantaged and the vulnerable. Many are referred to Pope Jai Thai by Touch Community Services, Society for the Physically Disabled, Project Dignity and SG Enable, a government agency that enables people with disabilities to function independently. Pope Jai Thai is creating social impact by offering employment and training opportunities to those with special needs. “I am their boss, their trainer, their counselor,” smiles Teh.

He adds, “We work very closely with their families to do three things for them: one, equip them with life skills and build their confidence; two, teach them to be independent and self-sustaining; and three, we empower our beneficiaries. Our next phase will be community building—it’s through interaction that barriers are removed. We want to challenge society’s mindset by making sure the food is good, and it’s made by the disabled.” Teh is quick to say that he has not come to this point alone. One wall at Pope Jai Thai bears the logos of sponsors and partners who have supported Teh’s endeavors. He credits Chew for her business mentorship and Koh Seng Choon, the founder of Dignity Kitchen, for his setting the standard when it comes to enabling the disabled.

Running Pope Jai Thai has not been devoid of challenges, despite Teh’s effervescent countenance. The business is a 24/7 endeavor, so he has scarce free time for himself and his family. He has no partner in this business, and so he constantly has to be aware of maintaining a business mindset. He is also searching for skilled workers like managers and marketing staff so he doesn’t have to do everything himself. Yet, he has to watch his costs because he doesn’t have much financial support although his family has been helpful. And naturally, working with the disabled is difficult—they are prone to meltdowns. The week that the City News team met Teh, he had just lost one of his kitchen helpers to suicide. She suffered from a mental illness.

“The majority of the staff have multiple issues,” Teh admits. “We take in people other organizations won’t. I know we cannot get overly emotional when something like that [suicide] happens. We have to keep going. When I’m tired, I look at Ann Shun: he’s so joyful, he keeps me going.”

Teh shares a testimony from a group of at-risk youths he engaged. “There were three of them who came to work part time for me half a year ago. I had another kid from the same secondary school working for me, Zach (not his real name) who has intellectual disabilities, and he was always being bullied by them. One time, during peak hour, Zach came to help them clean the table. He said, ‘Come, I help you, you go and take a smoke break.’ When they saw that, they started to understand him better. Now they are good friends; they are so protective of him.”

Indeed, the fruits of his labor are many and varied, and they have not gone unnoticed: Pope Jai Thai has been nominated for the 2017 President’s Challenge Social Enterprise Awards.

Pope Jai Thai is located at #03-03, Scape, 2 Orchard Link. The team also conducts Simulation With Disabilities workshops to raise awareness and teach people how to be effectively inclusive. Workshops are priced at $45 (with lunch) and $38 (without lunch). Email admin@popejai.com or call +65 6634 1238 to book.