Find A Need And Meet It: Chun Seng Noodle House

CHC members Jerry Ng and Fiona Lim are the couple behind Chun Seng Noodle House, a bak chor mee stall that serves up delicious noodles and feeds the needy as well.

But the goodness doesn’t end there. Each bowl is generously packed with springy noodles (springy even after having been delivered), a heap of minced pork, slices of fish cake, fishballs, meatballs and topped with chunks of fried lard. This hearty meal, seasoned with a tangy, spicy vinegar and chilli sauce is a well-balanced symphony of flavors you would think was whipped up by a Rolex-toting grandmaster hawker. 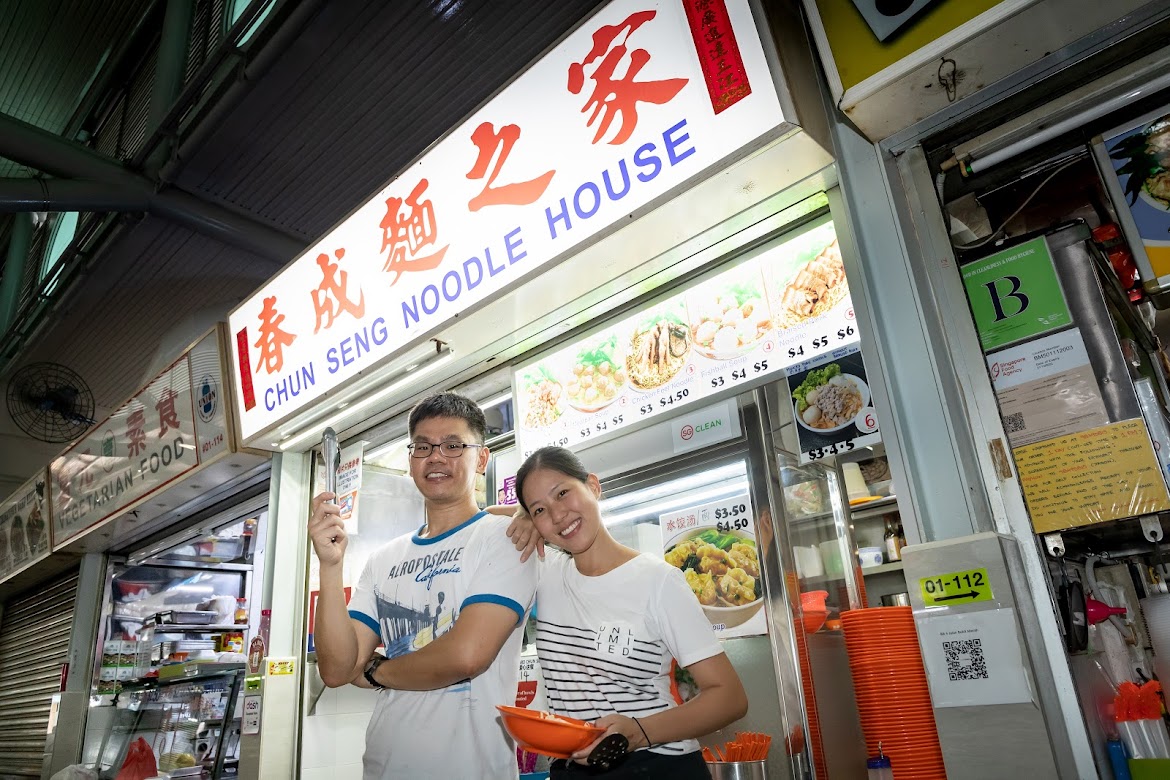 But the taste and texture are a culmination of months of research, arrived at after many, many hours spent slaving away at a boiling hot stove by the young couple.

HOW CHUN SENG NOODLE HOUSE CAME TO BE

“I stumbled upon NEA’s incubation stall program one day, and it felt like a sign from God,” recalls Fiona, adding that her husband was at a point where he was contemplating a career modification.

The couple’s extended families all run F&B businesses. In fact, Fiona’s mother runs her own hawker store at another center. The signature Chun Seng Noodle House lor bak was also based on an old family recipe passed down through the generations. The stall was named by Fiona’s mother: “Chun Seng”  is an amalgamation of her name chun (春) and seng (成) in Chinese.

This family background in F&B gave Jerry and Fiona, who have two children, the confidence and courage to join the incubation stall program.

In October 2019, Chun Seng Noodle House opened. The roles were established: Jerry was to run the store with help from his mother-in-law, the experienced hawker. Fiona would dedicate her time to the children and to the business-side of the stall.

“I love to cook too!” Fiona adds quickly with a laugh, “but Jerry’s really way more consistent when it comes to putting out really delicious food!”

It wasn’t easy at the start of their journey. Facing stiff competition from well-established hawker stalls at their chosen hawker center, ABC Brickworks, the couple were forced to find a way to stand out. They were also struggling to find the best suppliers, and working hard to perfect the balance of flavors in their offerings. 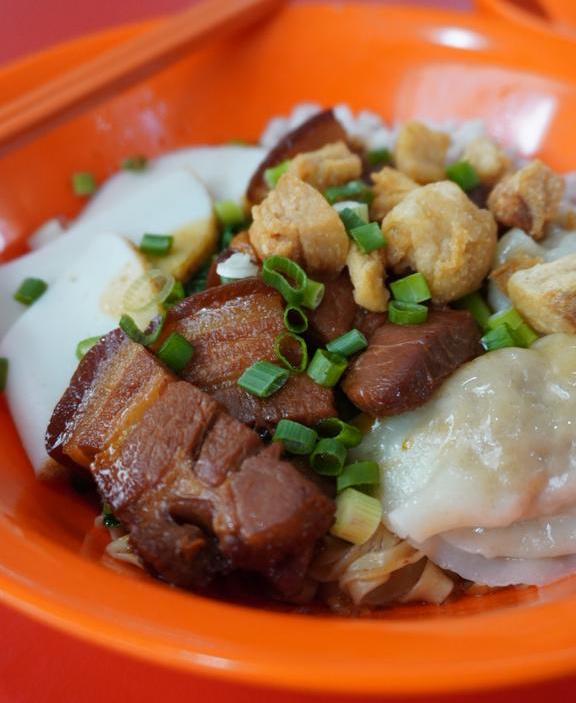 “Everything we cook is freshly made,” Jerry says proudly. We are speaking during a rare two-minute break before the lunch crowd arrives. “We don’t use anything frozen, which is how we can promise that you are getting the freshest quality from us.” With that, he runs off to attend to a growing line of customers.

Their attention to detail comes down even to the springiness of the noodles. After several changes, Jerry and Fiona finally found the supplier that could provide noodles with the right bite, the right taste and the lasting power to travel to the four corners of Singapore.

It was fortuitous, because this became exceptionally important just a few months after they had opened—the COVID pandemic saw Singapore enter its Circuit Breaker phase, making food delivery an essential service.

“We had no income for a few months!” Fiona exclaims, remembering those difficult days when no dining was allowed. “We were really worried, but thank God, the Circuit Breaker coincided with the renovation works ABC Brickworks had planned a while ago.” This meant they did not have to pay for rental during that period. “Really, it was God’s hand. There’s no other way to explain it.”

“When I was so stressed back those three months, I often read the Bible to find my strength. There are a few that I highlighted and bookmarked.” She lists ‘Therefore do not worry about tomorrow, for tomorrow will worry about its own things. Sufficient for the day is its own trouble.’ (Matthew 6:34). ‘The Lord is good, a refuge in times of trouble. He cares for those who trust in him’ (Nahum 1:7); and ‘That clinches it—help’s coming, an answer’s on the way, everything’s going to work out.’(Psalm 20:6, MSG).

The inevitability of slower income had arrived, but that also gave the couple time to start building an online following and to explore other avenues of income.

That was when Fiona came across an ongoing campaign started by hawkerpreneurs during the Circuit Breaker called Pay It Forward. She reached out to Member of Parliament Eric Chua to ask who she could link up with to work on this and he pointed her to Leng Kee CC, whose team designed and printed out the vouchers, which were distributed by volunteers.

How the campaign works is, it allows patrons to support local businesses such as Chun Seng Noodles and at the same time, provide meals for the needy. For example, if you order the signature minced meat noodles from Chun Seng, you can include an extra $3 (or more) to the Pay It Forward fund which will be converted into meal vouchers for the needy. Each meal voucher (worth $3) provides one needy person a dish of their choice from Chun Seng.

Generous patrons have donated 1,000 bowls, out of which 200 have been claimed since September. 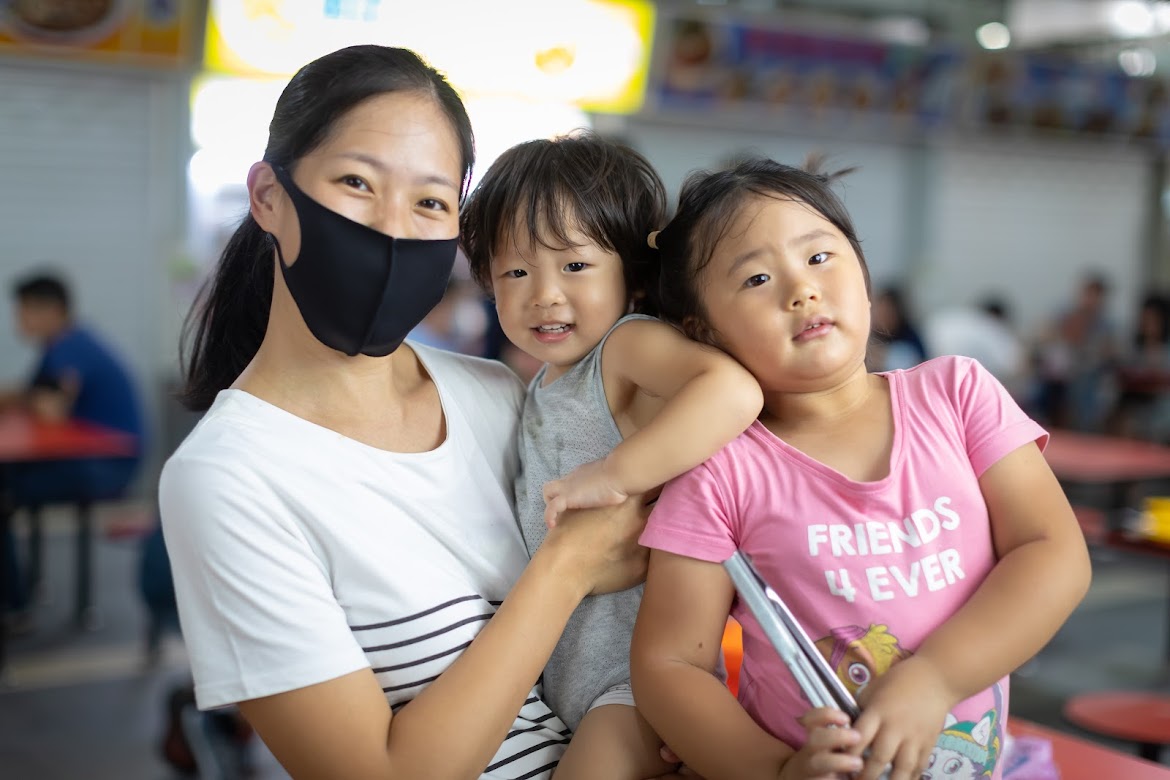 A volunteer with CHC’s drama ministry, Fiona is also a mother of two beautiful children

“I really have no idea how I came about the campaign, I really think God has just been providing us with opportunities and all I’ve had to do is to reach out to them,” says Fiona.

A little sheepishly, she admits that joining the Pay It Forward campaign was not entirely unselfish. It was also born out of the need for income during the difficult down-time just after Circuit Breaker.

“While we do benefit from patrons buying these Pay It Forward vouchers, we are thankful that it at least does good and feeds those in need as well.” Fiona proceeds to share an Instagram post of a friendly uncle who had come to redeem his voucher. “It really is a meaningful project.”

The laborious task of running a hawker stall is not easy, but Jerry and Fiona are pushing through. Out of the batch to come out of the NEA incubation stall programme, they are one of the more successful ones and have been picked for several television programmes. Fiona’s social media savviness has also attracted attention from popular foodies such as ieatishootipost, eatbook, danielfooddiary and more.

As their business continues to grow, they plan to continue supporting the Pay It Forward campaign.

Visit Chun Seng Noodle at ABC Brickworks Market and Food Centre; open 5:30am to 2pm, closed on Fridays. You can also get the noodles delivered to you through their Instagram page: @chunsengnoodle. Visit and support the Pay It Forward campaign today!

The Jesus Way Of Winning People