The Harvest Network 2019: A Time Of Sharing & Worship Entering into a time of worship at the THN Encounter Night

For the second year running, CHC held its annual gathering for The Harvest Network of affiliated churches and ministry leaders from the world over.

At its launch last year, Bobby Chaw, CHC’s missions director explained that THN aims do three things: one, to be an environment for communication and connection. Two, to be a channel to communicate key church policies and provide resources. And three, to be a platform to preserve God’s grace and mandate.

This year, the conference began on the Sunday after CHC’s anniversary service. A luncheon was held for delegates, where executive pastor Sun Ho, Pastor Kong  Hee and Pastor Bobby Chaw spoke, each sharing different messages to encourage and connect with the affiliate pastors and leaders.

TESTIMONIES OF GOD’S GOODNESS
Two affiliate church pastors took the stage. The first was Pastor Prashanth Babu from Super Vincimus Church in Chennai, India, who shared his story in a question and answer session led by Pastor Bobby. 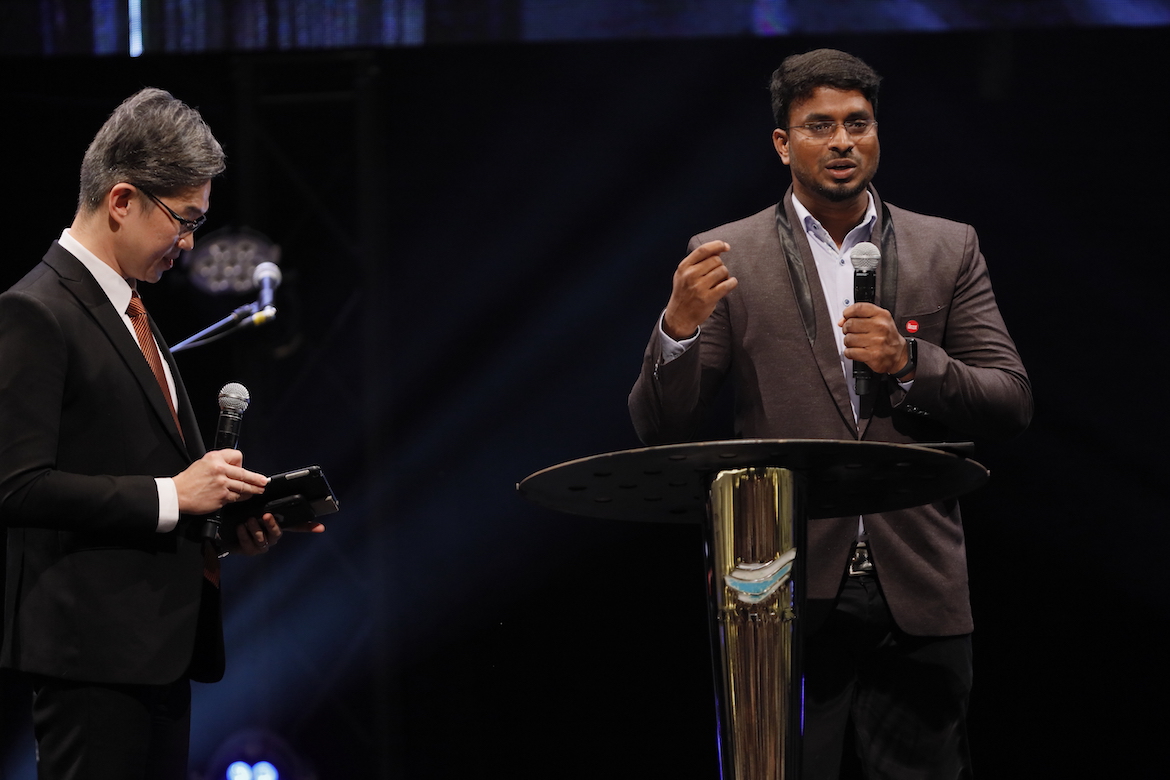 A 2014 graduate from CHC’s School of Theology, Pastor Prashanth told the gathering about how, after Bible School, he went home excited to grow  the youth congregation in his home church. However, he faced rejection and persecution when he applied what he learned at SOT, particularly about the Cultural Mandate. He was labelled insane and told to leave his church in 2016.

Though he was disheartened, Pastor Prashanth did not give up. He sought God for direction, and set up a new church with his older brother and three other members. They called their church Super Vincimus—a Latin term meaning “more than conquerors”, which he learned at SOT, during the study of the book of Romans.

Pastor Prashanth took CHC’s adage “Find a hurt and heal it, find a need and meet it” and included it in Super Vincimus’ mission statement. They decided to meet the needs of the young people in Chennai, providing classes in English language, personality development, music and other skills to empower this group of people. Through consistently sowing into their lives, Super Vincimus grew from five people to 80 in two years, and 70 percent are new converts.

MAKING A DIFFERENCE, ONE PERSON AT A TIME
Another powerful testimony came from Pastor Chabby Palmares from World Harvest Church in the Philippines. In 2015, Pastor Chabby was on the verge of quitting full time ministry when a pastor friend encouraged him to attend SOT with his wife Alma. SOT proved to be a life-changing experience for them—through the teachings, cell group meetings and services, they were spiritually revived. 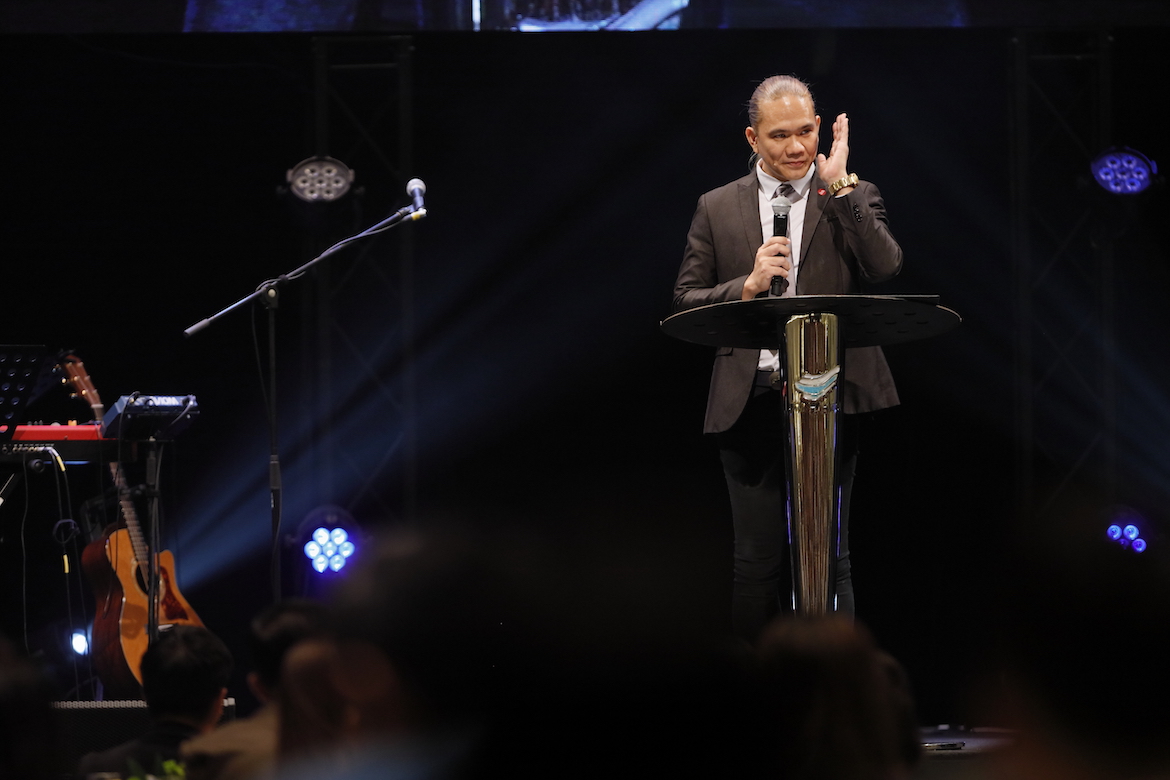 Pastor Chabby Palmeras of World Harvest Church sharing what God has done in the Philippines.

When they returned to their church in 2015, things were in a dismal state: attendance had dropped from 300 to 50, and many leaders were gone. Pastors Chabby and Alma began to rebuild their church with what they had learned in CHC: to build not just converts but disciples. They began a two-year Bible study program supported by CHC.

They also began applying the CHC paradigm: “The primary purpose of Christ is soul-winning”. They focused on reaching out to the people in the barangays—the village areas. Through reaching out to one person at at time, and making a difference to each one, they saw many come to Christ.

In one village community, a World Harvest Church staffer witnessed to a matriarch of a clan, and she received Christ. She was so fervent, she opened up her home to host cell group meetings and Bible study, despite the fact she was heavily criticised and persecuted. But she continued sharing the Gospel and eventually, all 68 people in that village were saved. This community church is now three years old and is reaching out to three other villages, reaching out and meeting needs one person at a time.

In 2017, they also adopted and started pastor Grace Harvest Church when its senior pastor resigned. Though there were just 25 people left, Pastor Chabby and Pastor Alma prayed and took a step of faith to move the church to a better location that could seat 120. After one year, the church grew to 120 people. They moved again, and in four months, the church grew from 120 to 250 people, by the grace of God!

Bible study classes have proved to be a powerful way to build up disciples for World Harvest Church. With CHC’s help, they have graduated several batches of Bible study class participants in Bacolod, Talisay and in Word Of Life Cadiz. Pastor Chabby and his team have ministered to nearly 40 churches and touched hundreds of lives—this growth has led to invitations to organize big events such as “Bacolod For Jesus” and “Bacolod Youth Celebrations”, which are city-wide events.

In the four short years after they graduated from SOT, Pastors Chabby and Alma have planted eight churches and are experiencing exponential growth. God has given them great success in the barangays, where they have started conducting community crusades, seeing many healed and hundreds coming to Christ.

Pastor Chabby shared that their vision for 2020 is to build strong churches with CHC’s DNA in all 82 provinces of Philippines and to impact the society.

The luncheon closed with a  with a special presentation of THN pins to each of the affiliate pastors. 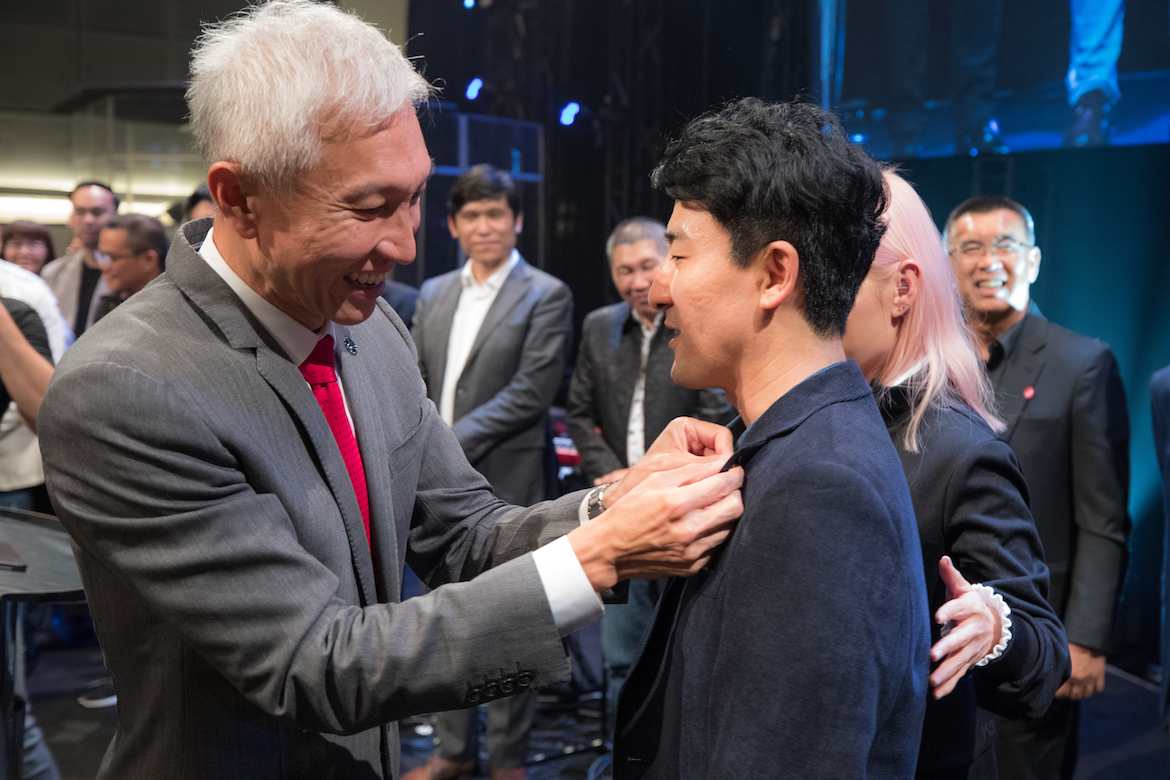 A TIME FOR WORSHIP
During the day on Monday, Oct 14, the delegates gathered in groups according to their regions for intimate roundtable discussions and prayer, sharing the challenges they faced in their ministries and receiving advice and encouragement from the CHC pastors.

That night, the delegates gathered for a powerful Encounter Night session. At the Encounter session, led by Sun and CityWorship, the affiliate pastors joined with the leaders of CHC in a time of deep worship, followed by prayer and the laying on of hands for the impartation of a fresh infilling of the Holy Spirit. Prophetic words were released over the affiliate pastors, and they were assured and reminded by Pastor Kong that they belong to the CHC family.

The conference ended with a time of fellowship as the delegates enjoyed a “last supper” with each other and the CHC pastors before they returned to their home countries.