Cell group E391 gets into the Christmas spirit of giving by volunteering at soup kitchen Willing Hearts.

As we ring in the Christmas season this year, City Harvest cell groups are not taking a back seat when it comes to doing good for the community.

E391, a cell group from JJ Zone is one in a series of CHC cell groups that decided to serve at Willing Hearts, a volunteer-run soup kitchen that prepares, cooks and distributes about 5,000 meals a day to beneficiaries such as the elderly, the disabled, low-income families and migrant workers every day of the year. City Harvest Community Services Association (CHCSA) has been organizing cell groups to serve at Willing Hearts this season. 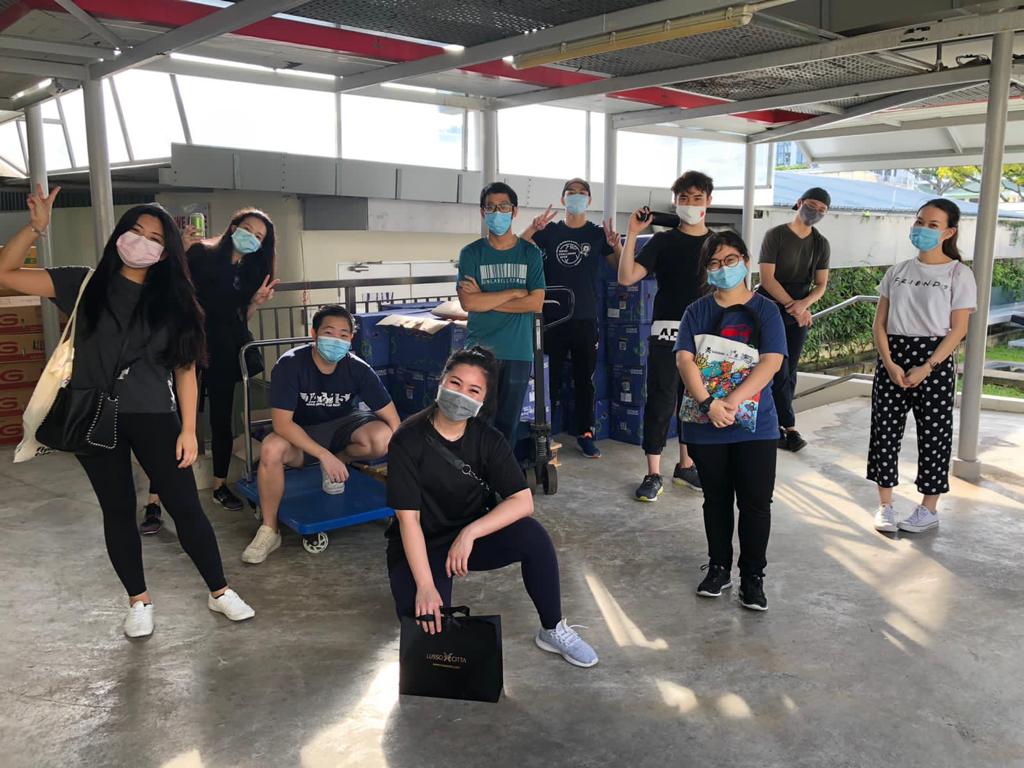 This writer decided to join E391 on December 5. It entailed waking up at 4 in the morning, to arrive at 5am at the meeting point in Kembangan, we met with the CHCSA representatives. I was excited to get in on the action.

Leader of E391, Arissa Wong, 28, explained why her cell group has committed to this effort. “I think every year, it’s good for members to come together and contribute to the community. Since we had this opportunity from CHCSA, why not give it a go? Our members were happy to give their time to do a meaningful thing for the community, to bring joy to people this Christmas season.” 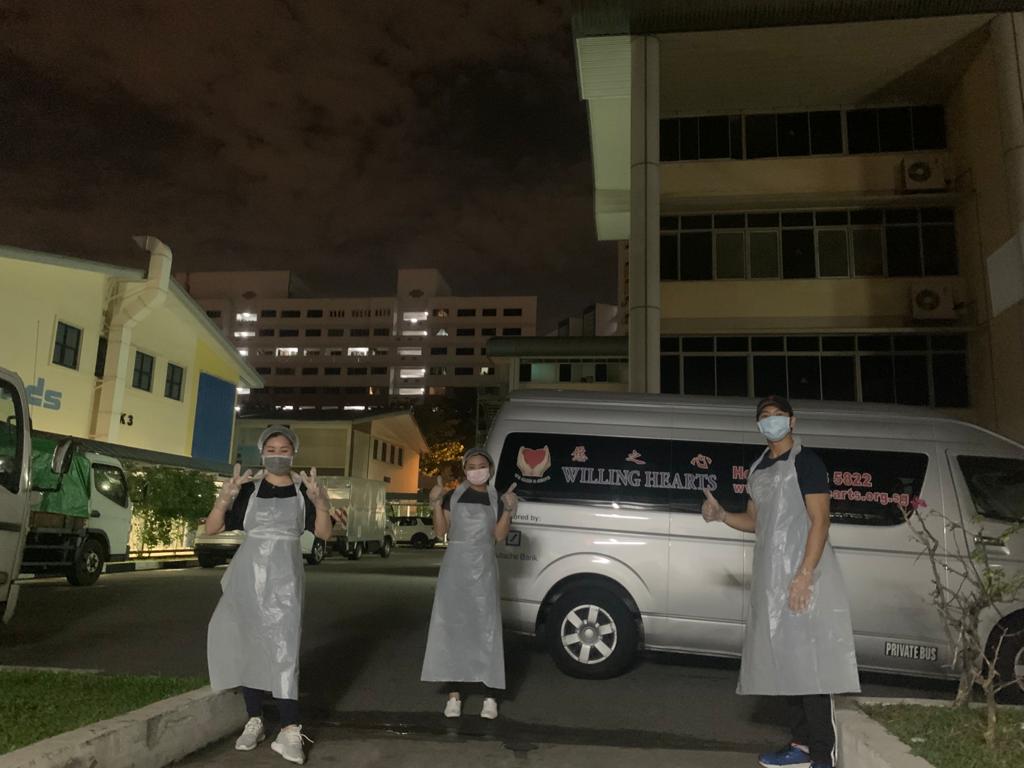 The moment you step into Willing Hearts’ industrial kitchen, what greets you is someone barking orders to you to take a disinfectant shower—totally necessary, especially because we are in a pandemic. Following that, you’re led to a table where you may put down your belongings, and then suit up in a disposable apron, hair net and gloves. Now you’re ready to get to work.

Willing Hearts is all about efficiency. Multiple tables are set up around the compound for volunteers to scoop and pack the food, and get the packs ready to be sent out to beneficiaries. Though it was 5am, the cell group was pretty cheerful and energetic. While some packed food, others were tasked with cutting vegetables or to the packing tables to ready the meal boxes. Arissa admits that “it was pretty tough for all of us to wake up at 4am. But I think we all felt quite energetic. It’s good that we get a hands-on experience of how Willing Hearts actually works. It’s not easy to clean, cook and cut the vegetables and to pack the food early enough to be distributed for the day. It’s an experience that I don’t think you can have in very many places.”

Similar to a factory’s production line, each volunteer plays a specific role: one scoops rice into Styrofoam box; the box is passed on to the next few volunteers who ladle in two different types of vegetables, and finally a meat item. The boxes are sealed, and then stacked into large red plastic bags, ready for delivery. 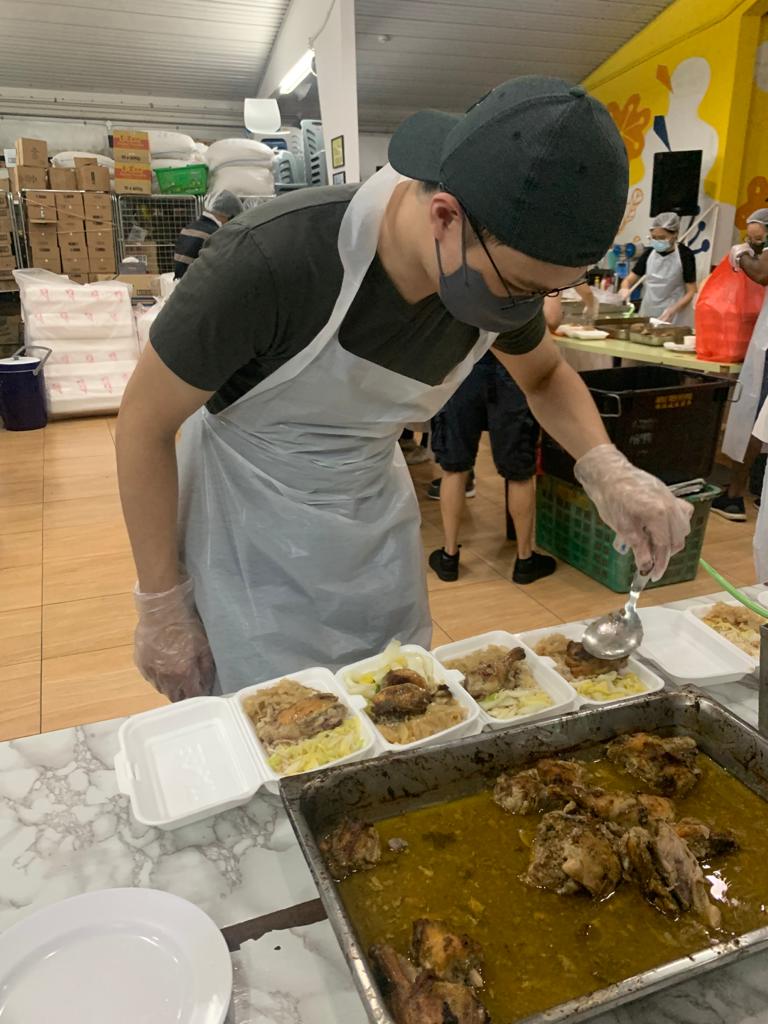 I would say that the staff at Willing Hearts are pretty sharp—they never failed to notice when a tray of food was getting empty, and would come back with a full tray of freshly cooked food. By the end of the three-and-a-half-hour experience, the cell group was pretty tired, but fulfilled by the work they had done.

A CELL GROUP OUTING WITH A DIFFERENCE

For E391 member Han Ting Clarice, 26, the whole experience reminded her of the phrase “every joint supplies” from Ephesians 4:16.

“Everybody plays an important role. When someone slows down, I would slow down and the next person has to slow down too. ‘Every joint supplies’ was etched into my mind, because we came with a heart that together, we were helping other people. Even though we were tired, we just pressed on.” 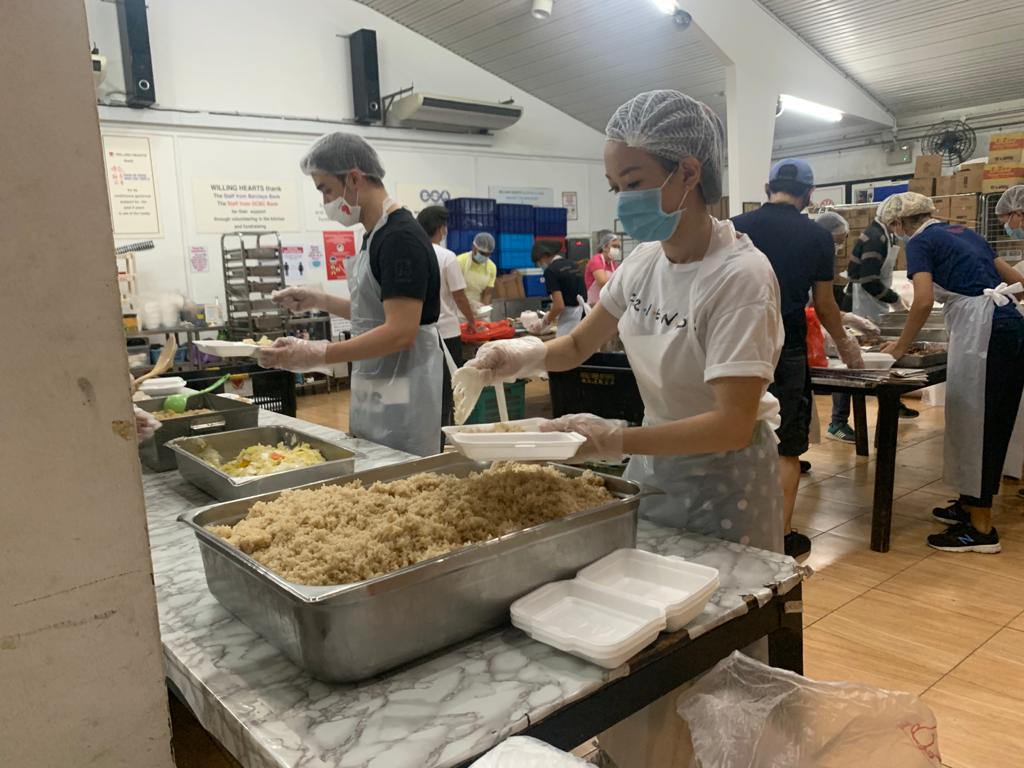 Serving the community at Willing Hearts also gave the cell group a chance to bond and fellowship together. With physical meetings of more than five not permitted due to COVID-19, this was one of the first few times the whole cell group could meet after the onset of the pandemic.

In a normal year, E391 would gather together at the end of the year to volunteer in various areas in CHC, such as Harvest Kidz or visiting the elderly from the Dialect Service. However, with all such activities suspended this year, the group was happy to be able to serve in a different way.

“In previous years, we would serve the people in church such as the newcomers. Here at Willing Hearts, it’s what Pastor Aries preached about—Gospel neighbouring—where we don’t just love other people because they have the same culture and beliefs as us, but we love all, whether they believe in Jesus or not,” explains Arissa.

“Who knows, through such volunteering, we may get to know new people and be able to spread a message to them about the season of love.”

CHCSA has many volunteering opportunities for cell groups and members of City Harvest Church. Check with your cell group leader for more details or email volunteer@chcsa.org.sg