In last weekend’s sermon, Pastor Aries Zulkarnain reminded the church to not lose sight of God’s purpose even as they are “stuck in the middle” of the ongoing COVID pandemic.

As the nation slowly tries to recover from the unprecedented impact of COVID-19 during Phase Two of the Circuit Breaker, many wonder how long this period of being “stuck in the middle”—neither in full lockdown nor entirely open—will last.

Over the weekend of Jul 18 and 19, City Harvest Church’s executive pastor, Aries Zulkarnain told the congregation that there is a purpose to being stuck in the middle, and there are things the church can do during this period. 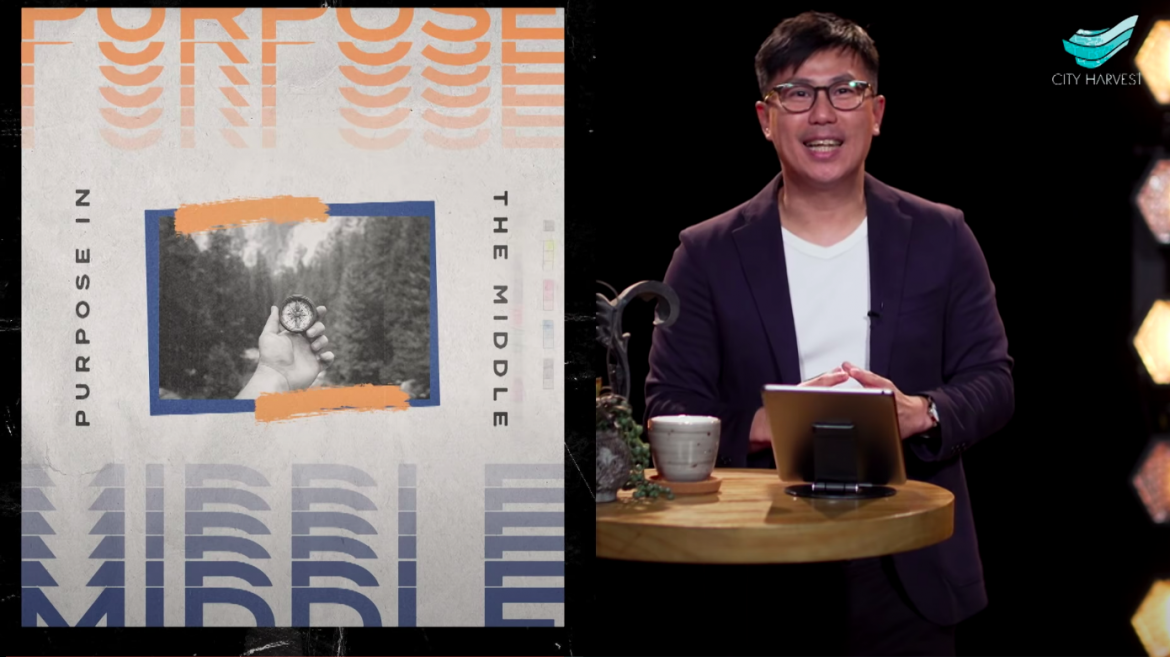 In his sermon, Pastor Aries drew a parallel between being in Phase Two and being stuck and feeling like one’s faith is hanging in mid-air. He proposed that this was what Mary and Martha could have felt when Lazarus was near death, and Jesus had not arrived.

The middle is a period when life does not make sense, when doubt rages loud, and Jesus goes quiet. It can be very frustrating. The pastor read out what Jesus told the disciples in John 11:14-15 (MSG): “Then Jesus became explicit: ‘Lazarus died. And I am glad for your sakes that I wasn’t there. You’re about to be given new grounds for believing. Now let’s go to him.‘” He commented, “If you feel that Jesus is not there with you right now, it is not that He has forsaken you, but it is actually for your sake. Because the delay is not to crush you; the delay is to build you up.”

Though being in the middle may be painful, Pastor Aries encouraged the church not to give up in this season because the middle ground is also fertile soil for faith to flourish and produce new life and new beginnings. John 12:24-25 reads, “Unless a grain of wheat is buried in the ground, dead to the world, it is never any more than a grain of wheat. But if it is buried, it sprouts and reproduces itself many times over.”

To help the individuals go through their “middle ground”, Pastor Aries unpacked two points in his sermon.

LOSS OF PROVISION VS LOSS OF PURPOSE The fear of losing one’s provision, or not having enough, can sometimes drive people to the point of stress, discouragement and confusion. Nevertheless, Christians need not worry; instead they should remember that “if you don’t lose sight of His purpose. His purpose will bring you out of the wilderness, not lacking in anything.”

Pastor Aries went on to say that God gives His believers a purpose behind their pain so that they will find hope, which will connect them to action. That action will eventually lead them into God’s promise.

He illustrated this point by bringing the church to Jeremiah 32 where the prophet bought a field during the time Jerusalem was in captivity in Babylon. Despite the economic depression, Jeremiah obeyed God’s word and bought a piece of land in Israel. This was a prophetic act: God wanted to remind Israel to not lose sight of His purpose. He wanted them to know that He had a purpose for them beyond their captivity; even when they were stuck in the middle, they did not have to be occupied with fear.

Buying the land was an investment for God’s next project for Israel, which was the salvation and the restoration of Israel, said Pastor Aries. God’s purpose led Jeremiah to hope, and that hope led him to a practical action of investing in a land that is the future of Israel.

“In the midst of waiting, don’t lose your purpose,” encouraged Pastor Aries.

What is foremost on many people’s minds at this time is self-preservation, but what Christians should not forget is to preserve God’s purpose. 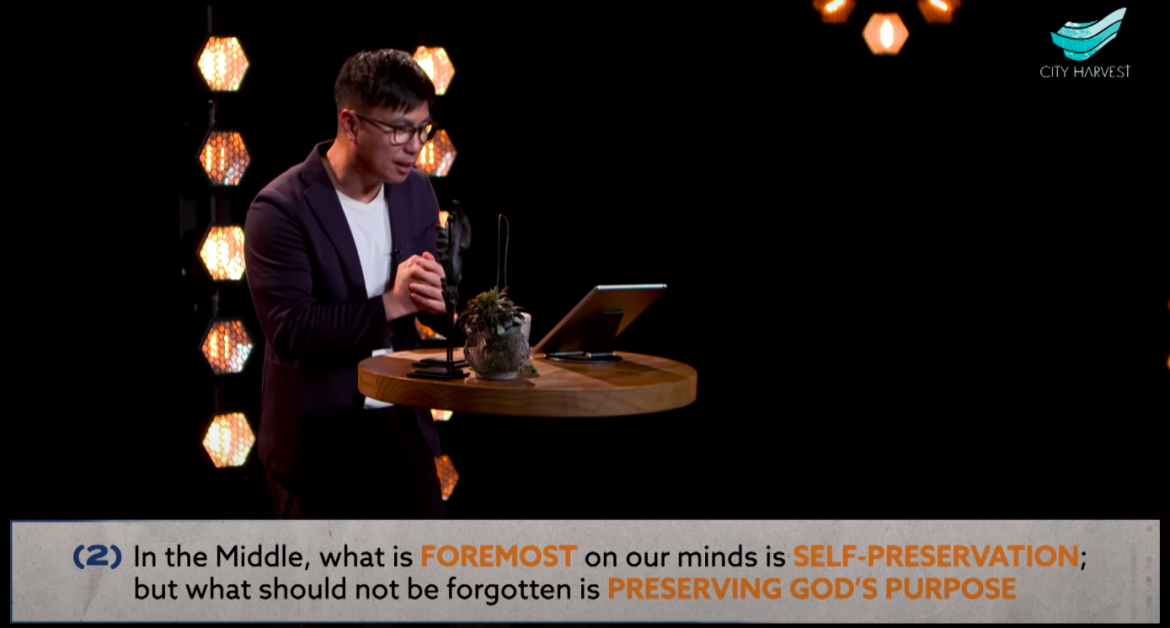 The prolonged effect of this pandemic can easily drive one to self-preservation mode and to having a siege mentality. However, the pastor reminded the church that “whatever you have lost, God can restore.”

The way God brings restoration was sometimes not through self-preservation but through helping a stranger in need. This was true in King David’s case. In Samuel 8:11-15, David was chasing the Amalekites, who had taken everything from him. During the chase, David helped an Egyptian, who was an abandoned slave of the Amalekites. In return, the slave led David to the Amalekites and the king got back what he lost.

Relating to what the church can learn from this story, Pastor Aries said, “While our physical gatherings have stopped, we cannot stop doing the purpose of God for our church, and that is to keep making a difference—finding a need to meet and finding a hurt to heal.”

He went on to cite examples of how the church and its members have practically rendered aid to the community during the pandemic. This was done through disbursing financial assistance from the Care Fund, and business owners in the church placing job listings on The CHC App to offer retrenched church members new jobs. Together with its community arm, City Harvest Community Service Association, CHC was able to help 149 unique individuals, giving out $135,000 to those impacted by COVID-19. Furthermore, church member Daniel Teh, who runs Thai restaurant Pope Jai Thai, donated 1,656 free meals to 56 households who applied for the Care Fund. Not only that, but other members have also taken this opportunity to reach out to the lost, to donate masks, care packs and hand sanitizers to the elderly community and healthcare workers. Phone cards were also donated to migrant workers who were isolated in their dormitories.

Pastor Aries also announced that CHCSA is opening a second branch of its eldercare center House of JOY in Tampines. This means that more elderly residents would be served.

“In the midst of us being stuck in the middle, we need to keep spreading the love of God, to our friends and our family members,” Pastor Aries encouraged. “Because the middle ground is the season where you can sow your seeds into their life, to produce new life, to produce salvation.”

Pastor Aries ended his message by encouraging the church to sow seeds of salvation in this season of middle ground. As they keep doing God’s purpose, God will lead them into His promise and restoration. Low Chee Meng, 30, an administrative assistant commented his greatest takeaway was when Pastor Aries preached about how purpose gives believers hope and leads them into action and brings them to God’s promises. “Because in every circumstance that we go through, there is always an opportunity for growth. Put God first and center in every decision and our progression is in our decision. God has already planned out everything for us and all we need to do is to follow His plan. It’s not going to be easy, but it will be good.”

Echoing Low’s sentiments, Shizuka Matsuda, 27, a School of Theology student, said that she was also reminded about not losing hope, citing that God’s purpose will bring His people out of the wilderness, not lacking in anything. “He will come and restore the areas in our lives.”