Every Joint Supplies: Churches Share Resources During The COVID-19 Season

“To have all things in common” is how Pastor Norman Ng of 3:16 Church described City Harvest Church’s offer to provide technical support and a venue for churches who needed to record their online sermons. City News spoke to the pastors of three churches who came to CHC on April 3.

On March 20, Singapore’s multi-ministry governmental taskforce dealing with the COVID-19 situation announced that all meetings of 250 persons and more had to be suspended. This put some churches in a spot—they could not hold in-person meetings, and they did not have the resources to record their weekend sermons at such short notice. City Harvest Church’s video department, CityTV, decided to make their services available to churches that needed to record sermons, and CHC opened up its Chinese service theatre in Hall 606, Suntec, for this purpose.

Since, then, however, new measures have superceded the earlier, and CHC is no longer able to offer this service to the churches. The final recording for three churches took place on April 3 before the Circuit Breaker came into action on April 7. City News spoke to the pastors of 3:16 Church, Bethany Christian Centre and Cornerstone Bahasa Service.

3:16 CHURCH
“Even before (the gathering of more than) 250 was not allowed, the Lord led us to decentralize into smaller groups,” said Pastor Norman Ng, deputy senior pastor of 3:16 Church, which has a congregation of 170 people. 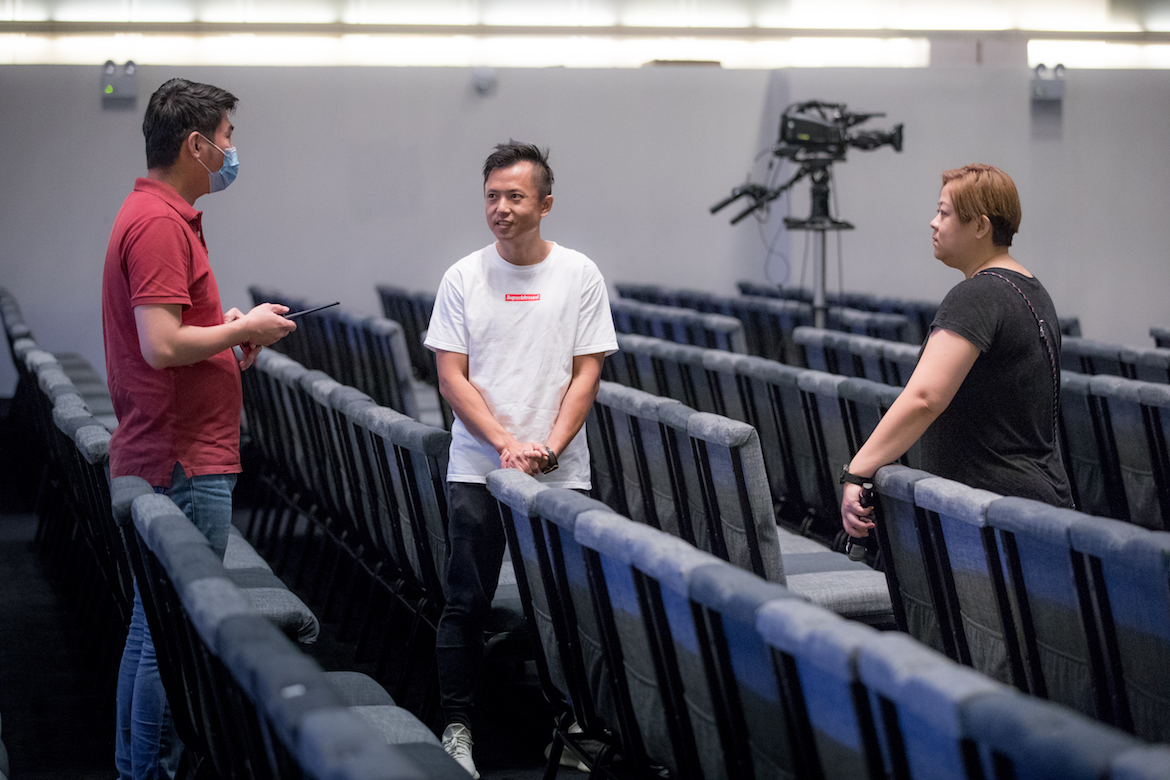 Pastor Norman Ng of 3:16 Church (center) with the CityTV team

“It’s not a reactionary thing to the measures that are implemented; it is a word from the Lord,” he explained. “It is for us to return to the expression of the Acts church to start together in smaller groups where everyone plays a part within the church. 3:16 made the call to decentralize into 12 different locations; each group having about 10 to 12.”

3:16 Church was one of the churches that responded to CHC’s offer for a place and technology to record their weekend sermons. “We are very appreciative of how you guys have allowed us to do so (record the sermon) by providing the recording facilities. And not only that, I think what’s very important to say is that you guys are modeling to the nation what it means to share all things in common. I was just reading Acts 2 and Acts 4, and those were the words used to describe the disciples in the early church: ‘to have all things in common’.” 3:16 doesn’t have recording facilities, but Pastor Norman points out that they have a good film crew.

3:16’s decentralized locations were not actual physical locations. It was a “Zoom location”, meaning each group would gather on Zoom, a video-conferencing platform. Each group has its host and worship leaders. Preparations to go into Zoom groups were made weeks ago and most of the members had signed up for the Zoom groups in time for their first decentralized service on Mar 29. On Tuesday just before their first decentralized meeting, the government announced that all gatherings of more than 250 had to be suspended. Since Tuesday, April 7, Singapore has gone into Circuit Breaker mode: “non-essential” services, including physical services in religious institutions, are temporarily discontinued. 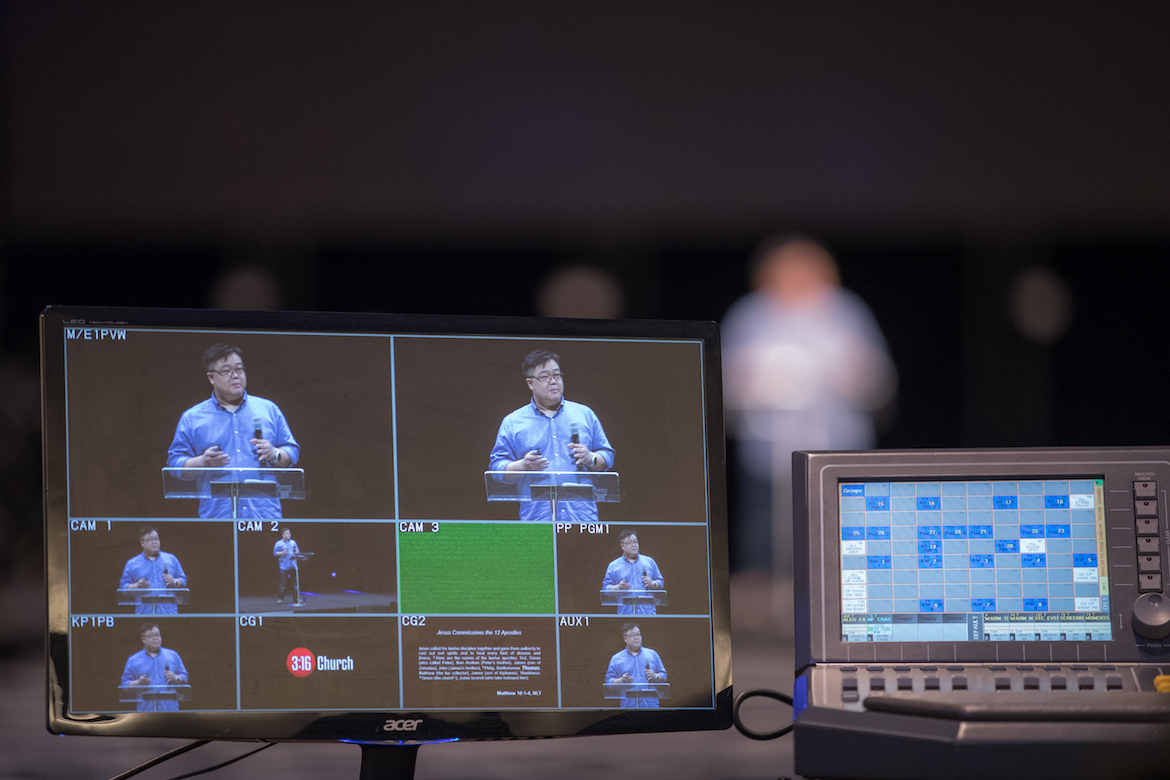 On their first online weekend (28-29 March),  the members of 3:16 logged on to their allocated Zoom groups and worshipped together. “We wanted worship to be facilitated live, so every Zoom location would have one worship leader and they would sing or play the piano while leading worship,” explained Pastor Norman. “The rest would be muted, but they would be singing in their homes. We didn’t know how this would play out but that first the first Sunday when we did so it was very moving.”

After the worship session, the satellite location leaders played Pastor Norman’s message filmed by the CHC CityTV crew. “That’s how people receive the word, and it is still a Sunday service because it’s important to receive the word together as a community.”

Pastor Norman explained that CHC inspired 3:16 to make their materials available to the church at large in Singapore.

3:16 had filmed a story on Chan See Ting, who had breast cancer at the age of 26. “[At first] we wanted to make it available to our churches, but CHC showed us what was possible. So we released a trailer to [all pastors in Singapore].”

3:16 offered to make all their trailers, footage and online discussion guides available so that the churches can use it for an evangelistic meeting on the Easter weekend.

BETHANY CHRISTIAN CENTRE
Ruth Chng, the senior pastor of Bethany Christian Centre said that even though she knew the day would come when Christians would not be able to gather in churches anymore, she did not expect it to be so soon. 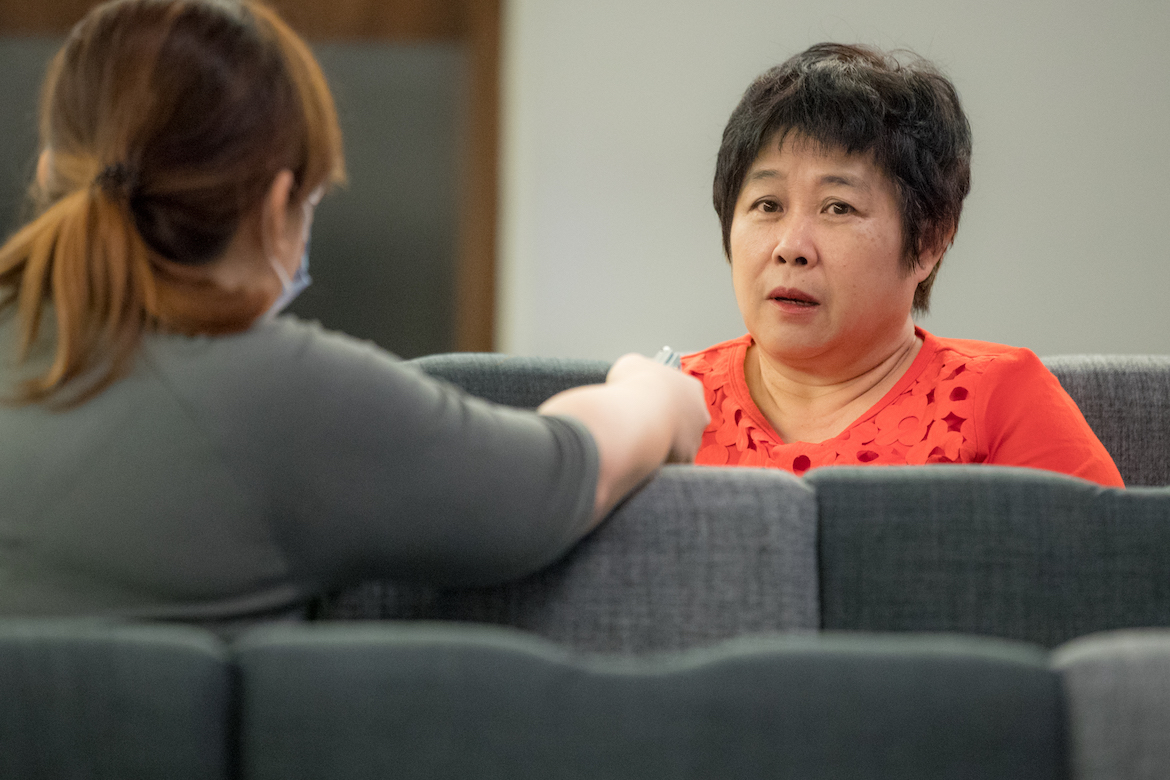 “I approached somebody (in my staff) and said, ‘We may have to consider doing some recording because it may happen.’ But they were not ready because we don’t have the equipment,” she shared.

“When I found out that CHC was offering help to do video production, I connected with your team straight away.”

The sermons recorded at CHC were uploaded onto Bethany Christian Centre’s private Facebook group, and Pastor Ruth encouraged her members to log on at 10am every Sunday. For those who did not have a Facebook account, the videos were sent to them via WhatsApp.

“There was good attendance,” she said. “We want them to watch at home with a family as a group. We call it church at home.”

Pastor Ruth also encouraged her members to partake of holy communion, either with their family or individually. At the time of this interview, she had plans to get her team to record a short worship segment using their mobile phones and link it to the pre-recorded sermon video. Eventually, she hopes to train the cell group leaders to connect with their members on Zoom.

“Some of them are close to 70, so it’s very challenging for them to use all this technology,” she explained. “We have to coach them on how to do it so that we can have some kind of connection with the people.”

The coronavirus has changed the way churches operate this season, but it’s important to adapt, said Pastor Ruth. “We don’t know how long this will go on. In a sense, church life is not the same anymore, but I think we all take it in our stride and try to move forward. Bethany Christian Centre’s theme this year is ‘Forge Forward’, so in this challenging time, we find a new way of doing things.” 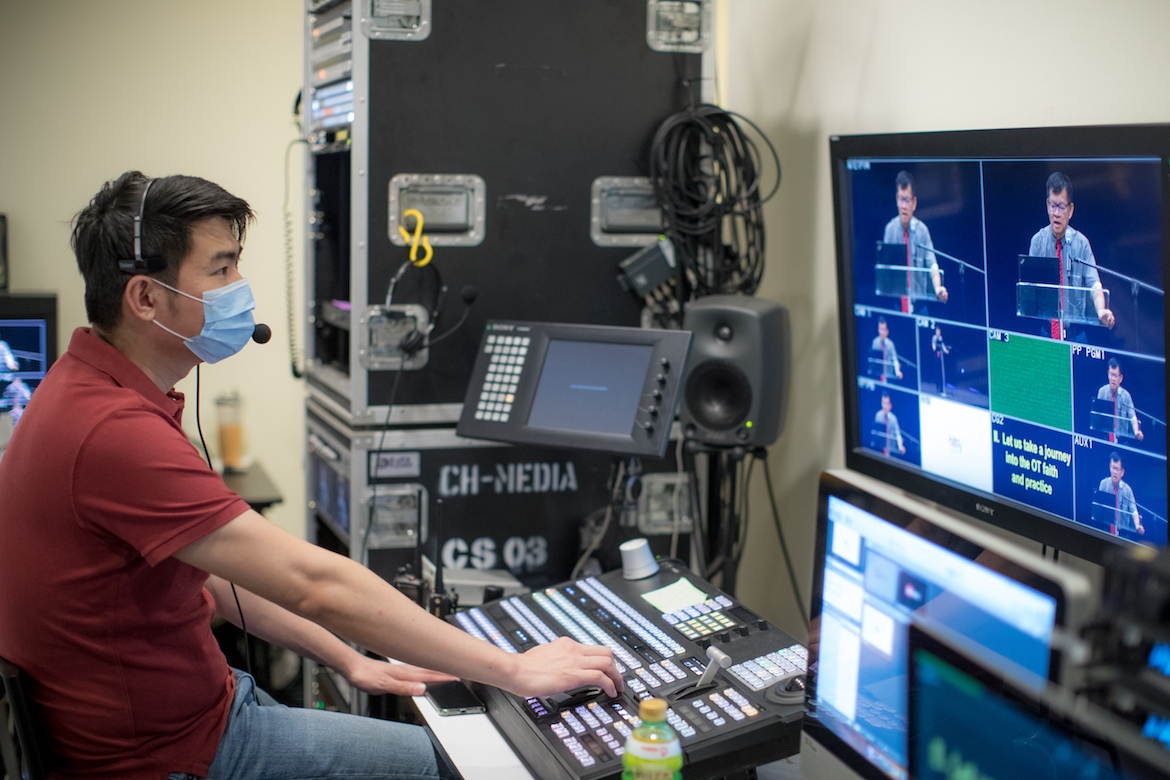 Pastor Ruth also expressed her gratitude to CityTV. “I am very impressed with the kindness of your team. The hospitality, the generosity, authenticity and the genuine help that your team has extended to us. It touched our hearts to the core.”

CORNERSTONE BAHASA FELLOWSHIP
Cornerstone Bahasa Fellowship’s senior lay pastor Peter Sam found himself in a difficult situation when the safe distancing measures began. “Most of our members are domestic helpers,” he explained. “So they have to submit to their employers.” The Ministry of Manpower had sent out messages to employers and domestic helpers discouraging weekend off-days outside the home. 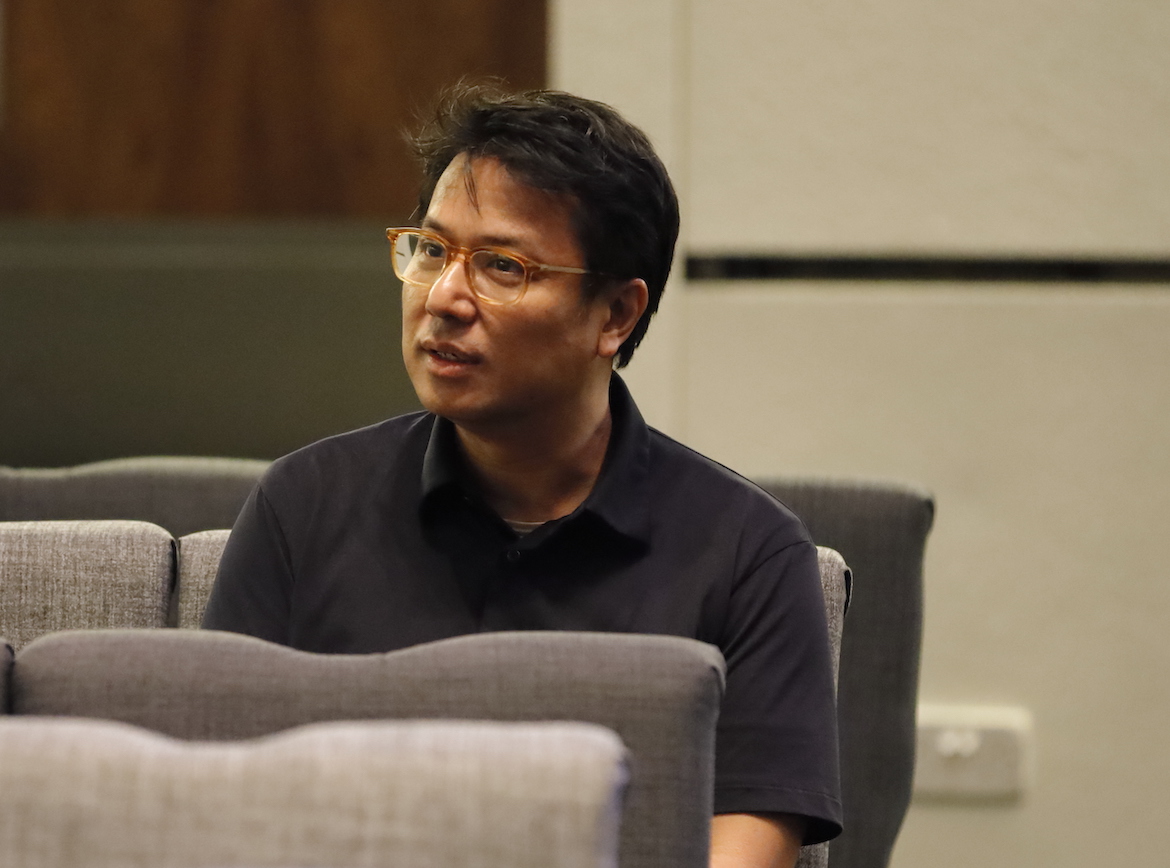 When Pastor Sam brought his team to record the sermon at CHC, he was moved by the help rendered. “It was fantastic,” he said. “When I first came into this room, there’s a spirit of humility here. I was so touched. I was just tearing up the first few minutes. It’s amazing, this place.”

The sermon video was sent out to his members via chat. Pastor Sam also keeps his flock connected by engaging them on social media and praying with them on the phone. “The only thing is that they finish work at 10.30 pm. It’s late at night, but the fire is there, so I’m very happy to see that.”

Due to the Circuit Breaker measures, CHC can no longer offer on-site recording services. CityTV’s producer Danielle Ho tells City News that she has given these pastors some guidelines on how to use simple equipment to shoot their own sermon video using a mobile phone. She hopes that this will help them record their own sermons in this season.