It was inconvenient, it was frustrating. But when the couples were forced to only have the bare necessities in a wedding, they realized what the most important things were.

Before 2020, tell anyone you are having a birthday celebration over video conference or dinner over Zoom and people are likely to give you questioning looks. Yet many couples had no choice but to hold their weddings over Facebook Live or Zoom in 2020.

The COVID-19 pandemic has changed so much of what we know, yet it has not taken away what we have. Weddings may be stripped down to the bare necessities, but they remain as joyous and as heartwarming as ever.

City News asked three couples who were married at different stages of the pandemic to share their experiences.

GERALD & GWENDOLYN: TWO IS BETTER THAN ONE

Gerald Wong and Gwendolyn Tan had an unforgettable wedding and honeymoon–mostly because of the problems COVID-19 caused for them. 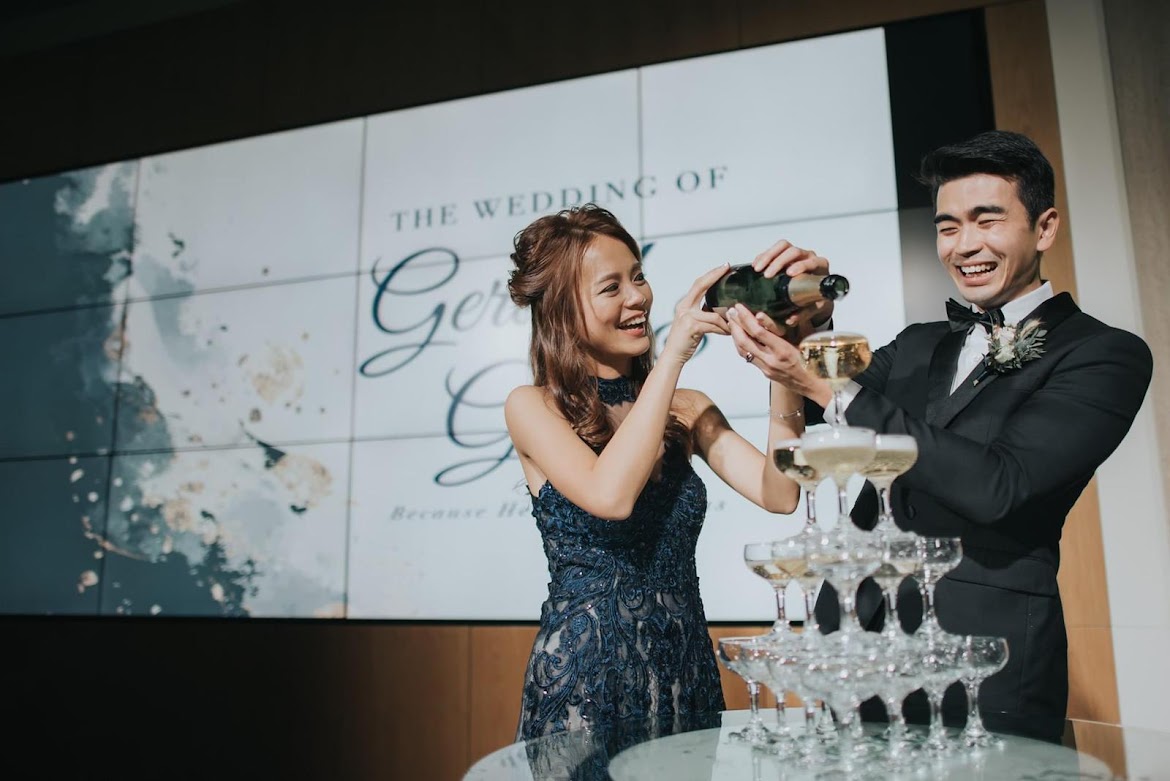 “The church that we intended to use for matrimony on Feb 29, 2020, was Grace Assembly of God (Tanglin). It became one of the largest Covid-19 clusters in Singapore,” Gerald told City News. Even though that happened two weeks before the wedding and the church compound would technically be virus-free, the couple decided against using it.

Their next step was to find another venue that could sit more than 300 guests, which was not an easy feat as the wedding was to be held in less than 10 days. Not only did it cause their budget to go up, the couple also had to scramble to make changes to their initial plans.

“We’re immensely thankful that we had wonderful friends who selflessly volunteered to stand in the gap,” Gerald said. “We realised that it truly takes a village to plan a wedding!”

“Through this entire process, Gwen and I had to grapple with the reality of not being able to experience our initial wedding plans and possibly having to turn some of our guests away,” he recalled. “What was beautiful throughout this process was how Gwen and I found ourselves  not overly panicked about any of these–we believe that it was God’s grace that really helped us to stay calm through it all so we can manage the situation.”

Little did they know, more adventures await on their honeymoon. Gerald and Gwendolyn left for Spain right after their wedding.

Things started going wrong from the start of the trip. “Just two days before our flight to Barcelona, we received a text message from the airline notifying us that our flight was cancelled because it has a scheduled stopover in Milan, which was Italy’s epicentre of the pandemic at that time. We were told however that there was another flight for Spain available to us, which would depart in two hours. It was crazy but we spontaneously decided to take up the offer .”

Eight days into their trip, Spain was called into a state of alert. “We were in Madrid then and all shops were closed while we were touring the city. When we were on the train to Granada, the government announced that Spain would go into a nation-wide lockdown within two days. We only had one day to  leave Spain or we would be stuck in the country potentially for an indefinite period.”

Granada was a small city and had limited accessibility. The newly-weds spent the whole night trying to find a way out of Spain. They finally decided to take a bus that would leave the country for Portugal the next day’s afternoon. “At that point, all the restaurants in Granada had closed and the hotel didn’t have room service. We were starving and had to survive on a few pieces of bread we found from the hotel’s tea-time pantry.”

The next morning, the couple woke up to a text message informing them that their bus was cancelled! Thankfully, they managed to find another one with an earlier departure that morning. With a window time of two hours,  the couple rushed to check out from the hotel and reached the bus interchange in time to board the 10-hour bus ride. “Thank God we were able to cross into Portugal three hours before Spain’s borders were closed.” 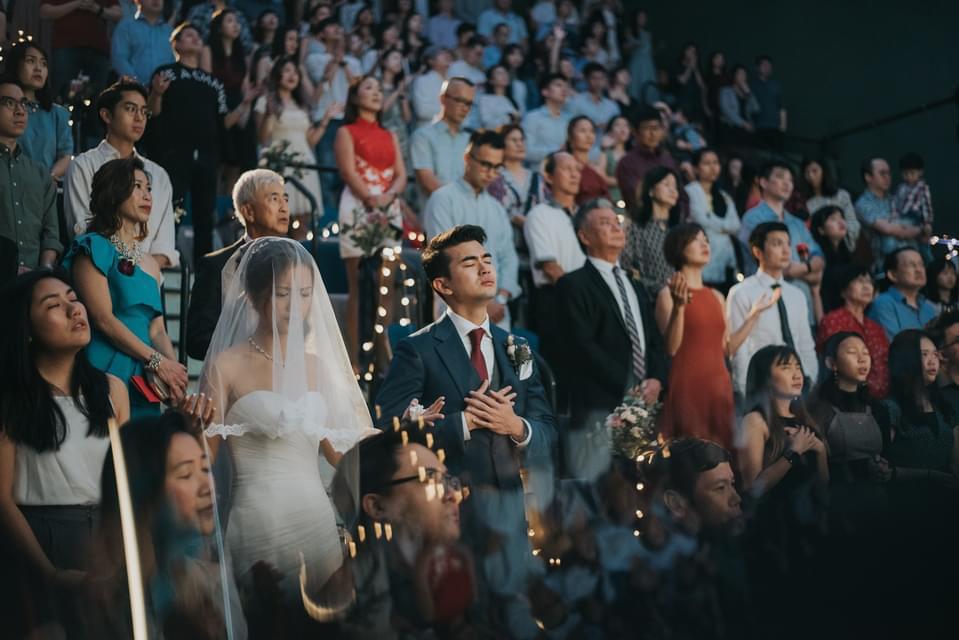 Gerald and Gwendolyn held their matrimony on Feb 29, before Singapore started the safe-distancing measures.

Looking back, Gerald was still thankful in spite of the whole ordeal. “We came together like a team to find the next best solution. It really made us understand that two is indeed better than one! Despite the stressful circumstances, Gwen and I really felt the peace of God with us and are so thankful that everything worked together to help us get home safely.”

GARY & JOELYNN: IF GOD IS PRESENT, IT’S MORE THAN ENOUGH

After dating for 14 years, Gary Loo and Joelynn Tan were finally ready to tie the knot on July 11, 2020. But when Singapore went into lockdown in April, they knew that their plans had to change.

“We didn’t want to postpone our wedding because the future is unknown,” Gary shared. “It’s quite stressful to keep changing our plans.” 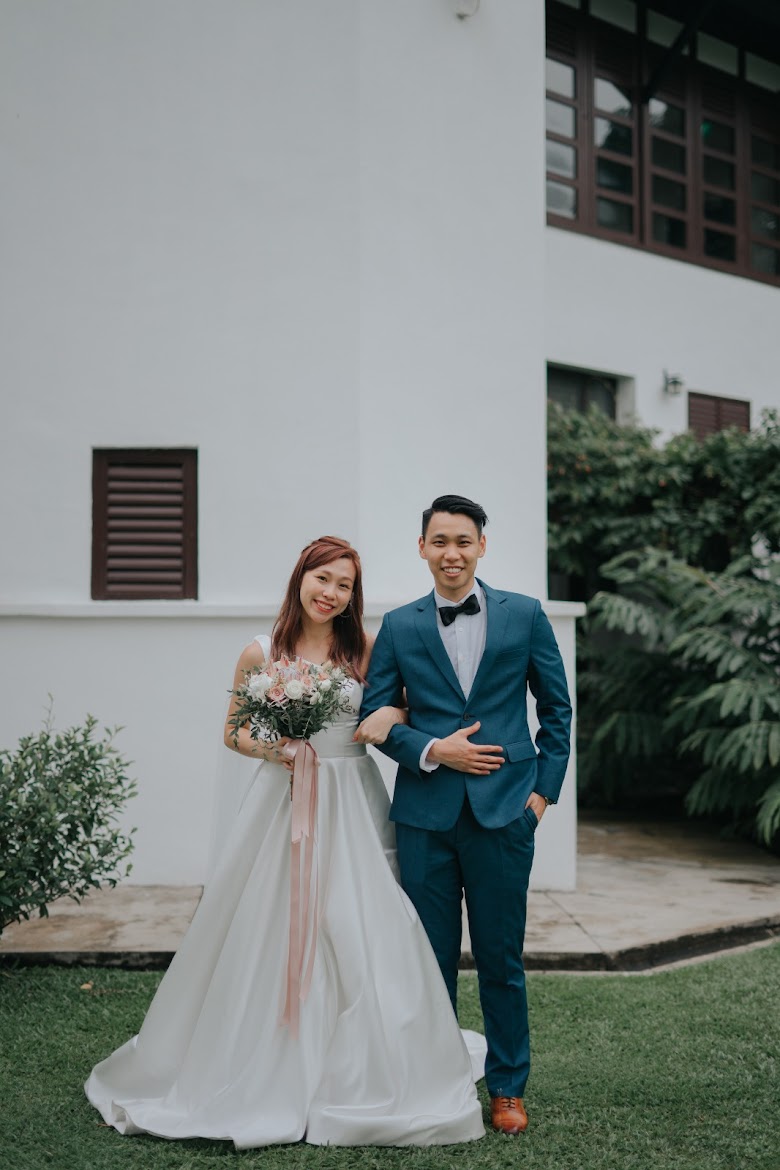 By then, they had already put down the deposit for a venue for their wedding banquet, paid for a wedding package and informed all their guests of their wedding date. Deciding to go ahead with a simpler wedding meant that they had to cancel their dinner banquet. Thankfully, Marina Bay Sands was gracious enough to refund their deposit in full.

When they tried to get a refund for their wedding package, however, things got a little trickier. “There were many services in our bridal package that I wouldn’t be using because we had to scale down the wedding–I only used one gown for the Holy Matrimony in the end,” Joelynn shared. Gary, who is an accountant, calculated the value of the unused services and asked the bridal studio for a refund. The studio, however, was not willing to refund in full.

Gary then decided to get intervention help from the government and file a notification for relief. “Eventually, we got back a few hundred dollars more than what the bridal company was willing to return us,” she added. “We really thank God  that we are not lacking in our finances.”

The decision of having a small wedding led the couple to ponder the real meaning of marriage. “We discussed with Kelvin Tan (their pastoral supervisor) and Joel Tan (Joelynn’s older brother), and they both told us that while the wedding is just for a day, marriage is a lifelong journey. What is important is how we live our married life,” Gary shared.

That led the couple to ask God the same question. “It is really between the two of us, having a covenant with God, so if God is there (at the wedding), it is actually more than enough. We are thankful to God for the good counsel and for reminding us that the most important thing is  our lifelong journey and that He’s glorified in our marriage.”

TIMOTHY & BEVERLY: DISTANCE CANNOT SEPARATE US
Timothy Kwok and Beverly Ng had plans to tie the knot on Dec 12, 2020. “The date had a nice ring to it,” Beverly explained, “ and it would also be easy to remember.” However, when Singapore announced the Circuit Breaker measures in April, Beverly and Timothy made the decision to postpone their wedding by six weeks to the end of January 2021. “Back then, we were hoping to buy enough time for things to return to normal.”

The couples had been planning for their wedding in a systematic way by paying their deposits early and booking their vendors in advance. “With announcements that our attendance list had to be scaled down, we made the decision to cancel our hotel banquet reservation and go with a simpler wedding lunch,” Beverly said.

When the couple finally tied the knot on Jan 30, they had to scale down their guest list from the initial 175 to 100, with a smaller number of six to eight guests per table. The guests also had to put on their masks during the wedding, when they were not eating or drinking. 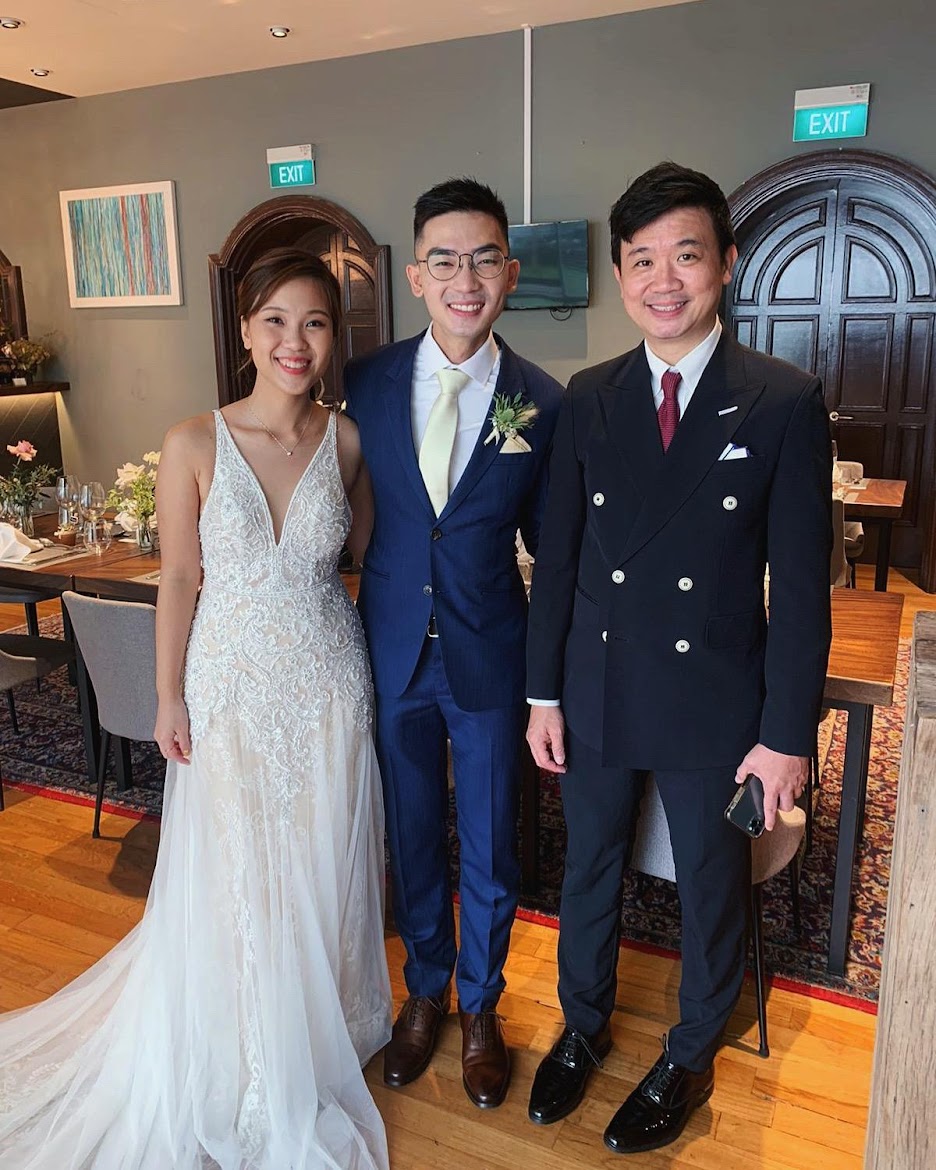 Nevertheless, the couple and their guests had a great celebration. “Everyone was still jubilant, still in celebratory mood,” Beverly said. “In the end,  we still had the people we hoped to share our moments with, and the celebration we wanted to have. This pandemic also had unintentionally helped us to save money by getting only what we need–it challenged us in a unique way.”

During the lockdown, the couple could only see each other virtually and all their planning had to be done via phone and video calls. “We had to be patient with one another. Planning a wedding in a pandemic also reinforced to us that our wedding is only for a day, while our marriage is for life. When we made the decision to forgo the ‘extras’, we felt more at ease. We also now know that distance really cannot separate us!”

They are particularly thankful to their cell group leaders, their bridal crew and Leila Tan, their pastoral supervisor. “They were our support emotionally and our helping hands throughout the wedding,” shared the happy bride.

The COVID-19 pandemic had indeed disrupted plans and posed some challenges to “life as we know it”, but it seemed to have resulted in the unintentional consequences of gaining clarity on things that really matter in life, and to learn to let go and trust God more–worthwhile and valuable lessons for us to keep in mind and live out, for perhaps as long after the pandemic has blown over us.

Birthing Pains: The New Mom’s Journey In The...