Indonesian Churches In The Harvest Network Fight Against COVID-19

Despite their government’s efforts to bring in vaccines and implement lockdowns to curb the COVID-19 virus, many in Indonesia are left to fight on their own due to the sheer volume of cases. Pastors from CHC’s affiliate body, The Harvest Network, share their own journey recovering from COVID-19, and how they have experienced the grace of God in this crisis. “I contracted COVID-19 because I helped a church member,” says Michael Litha, a pastor in GPdI Bukit Hermon. “He had no one to help him because his whole family tested positive for COVID-19.”

When Pastor Michael heard that the church member’s oxygen level had dropped below 80 per cent, and that he didn’t have an oxygen tank, he went out to buy and deliver a tank to his member. According to the World Health Organisation, oxygen levels below 90 per cent are considered a clinical emergency and require immediate medical attention.

“When I reached his home, he was unconscious and blood was coming out of his nose,” Pastor Michael recounted, adding that he had no choice but to enter the house and help his member. “We called the ambulance, and we called the hospital, but no one could help. No hospital could take him—they were all full.”

Pastor Michael called a friend who worked in a hospital who agreed to help the sick member. The only other people in the house were the church member’s wife and their teenage daughter, so Pastor Michael had no choice but to carry his sick member to the car with the help of the wife. “The hospital was in Bandung, and I drove very fast to bring him to this emergency room.”

Unfortunately, the church member passed away, just minutes away from the hospital.

Pastor Michael was certain that the exposure meant he had caught the COVID-19 virus by then. After conducting the member’s burial, instead of heading home to his family, he went to stay in an isolated room in his church, quarantining himself for two weeks.

While his symptoms were not serious, the experience was uncomfortable because the room had no air-conditioning and was right next to the expressway. Moreover, the church building was near a hospital and Pastor Michael could hear the ambulance racing by every 10 minutes. 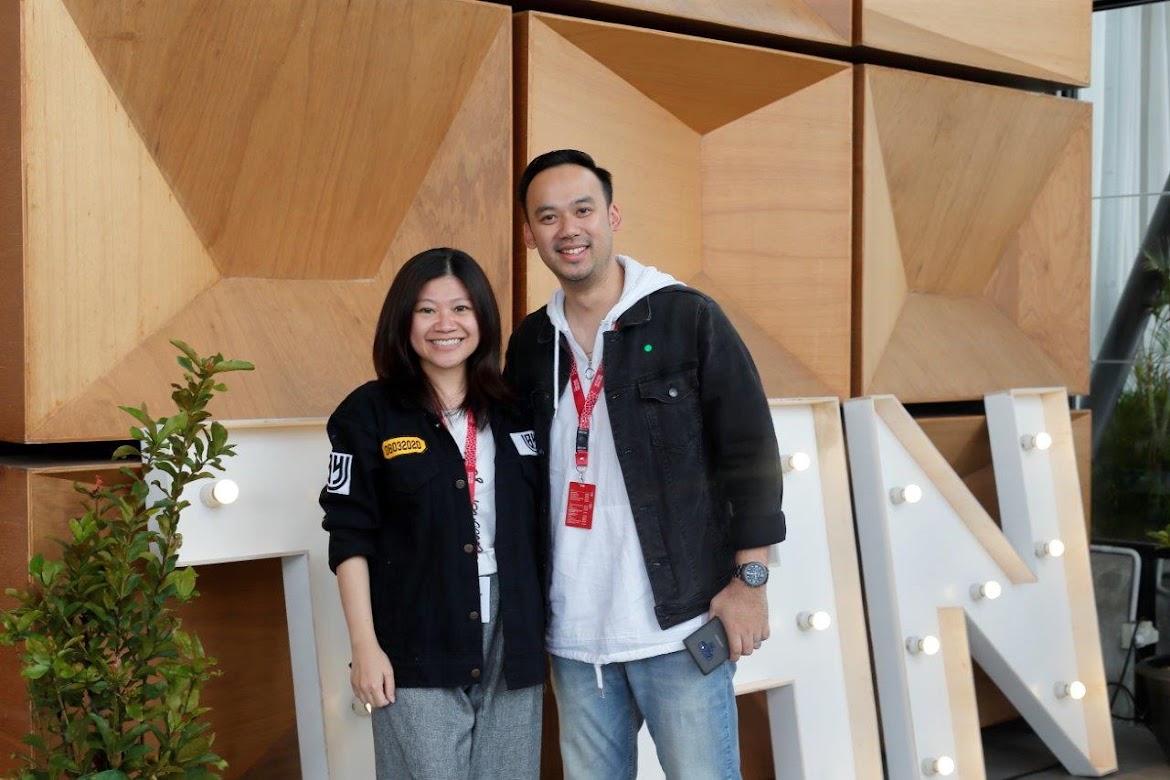 He is thankful that he had a good support system made up of friends, family, and mentors throughout this ordeal. “They would send me voice messages to encourage me,” he recalls. “Also, this incident happened a few weeks after Pastor Kong (Hee, CHC’s senior pastor) conducted the Bible study on Silence and Solitude with the THN (The Harvest Network) pastors.” Pastor Michael spent those two weeks in that small room seeking God in solitude and God gave him revelations on how to reach his leaders and members.

“I called up the leaders and church members one by one to encourage them,” he shares. “When I encouraged others, I found I was automatically encouraged myself.”

CARING FOR THEIR MEMBERS IN THE MIDST OF COVID-19

GPdI Bukit Hermon—located in Cimahi, a city just outside of Bandung, Indonesia—is a church in City Harvest Church’s body of affiliate churches, THN. Like many cities in Indonesia, Cimahi was hit hard by the pandemic since March last year and the surge in the Delta variant this June worsened the situation.

As the city went into lockdown, many people lost their jobs. Because churches could not gather, many eventually lost their congregation—Pastor Michael heard of churches that had to shut down, though, thankfully, GPdI Bukit Hermon did not lose many members. To help his members stay in the faith, Pastor Michael came up with creative methods to help them.

“The majority of our congregation are from middle or low-income families, so we need to provide mobile data for them to go online to watch service,” he explains. “We spent about 15 million IDR (SGD 1,400) per month doing that.”

For the older members who did not know how to go online, the church bought MP3 players. “We would record the audio sermon—the same one that we upload on YouTube—and send it to the cell group leaders who would add it to the MP3 players. They would then go to their member’s houses to pass the MP3 players to them on Thursdays so that they can listen to it on Sundays,” Pastor Michael elaborates.

“We cannot go to their house to spend time with them or fellowship with them. They cannot go to church, so this is the only way they can hear the sermon,” he adds.

CALLING UPON THE HOLY SPIRIT, THE  PARAKLĒTOS

Another THN pastor who contacted COVID-19 was Raymond Fernando Arijanto, founder and senior pastor of GPdI Pillars in Christ in Jakarta. Although the infection started as a mild flu, his oxygen level dropped to 90 per cent within a week and he was admitted to hospital. “I remember because it was on Valentine’s Day, 14 February, when I went to the hospital. Praise God the COVID cases were still low then and there were many rooms available in the hospital,” he shares. Although he and his wife, Cindy, tested positive for COVID-19, only Pastor Raymond needed to be warded. “I only had a fever for two days, no flu and I only coughed at night. I didn’t know that the normal oxygen level should be above 95 per cent and not 90 per cent. Mine was already at 93 per cent.”

He was admitted to the hospital on a Sunday and by Wednesday, Pastor Raymond’s symptoms were so serious that the doctors moved him to the ICU. “I stayed in ICU for two weeks till I could breathe regularly again. They found that the sugar level in my blood is too high and that was the cause,” he recounted.

The two weeks turned out to be a blessing for Pastor Raymond. He took the time to rest. Several times a day, he would worship God alone in his bed. “After I left the hospital, I said to my wife, ‘I think it is a blessing to have personally experienced God,’” he says.

“I’m 49 years old, and have never been hospitalised before this. I think for me as a pastor who has preached that God is Jehovah Rapha, God the Healer—now I experience it for myself,” he adds.

Things were very different for Cindy, his wife. Pastor Raymond could sense that she was worried when she said goodbye to him in the hospital. “We heard many stories of people going into the hospital with light symptoms then passing away. They didn’t have the chance to see their family members again,” Pastor Raynond explains.

“When I was in the hospital, Pastor Kong, Pastor Bobby (Chaw, executive pastor of CHC), Pastor Aries (Zulkarnain, executive pastor of CHC), called and prayed for me. Pastor Bobby’s prayer was to let the Holy Spirit, the paraklētos (translated to mean “called to one’s aid”), help her. Not just for healing but to ask the Holy Spirit to help,” he recounts. “For Cindy, it was really powerful because she tried to help me, but she felt that she had failed to take care of me. When Pastor Bob prayed that prayer, Cindy said, ‘Okay, God, I believe in You, I feel the peace.’ After that, she felt better.

Pastor Raymond has now fully recovered from COVID-19 and his recent medical reports showed that there are no scars in his lungs. That is a miracle that he thanks God for.

In GPdI Pillars in Christ, most of the members work in the entertainment industry or are business owners. Some businesses were affected because of the lockdown, but God gave them other opportunities. “Some (members) are affected but overall, it is not so bad. It is really the grace of God for our church.”

The church also found a new—and better—location. “Our previous location was in a shopping mall and before the pandemic started, the management wanted to raise the rental,” Pastor Raymond says. “We then found a new location, but when the pandemic came last year, we thought that the timing was wrong.” Yet, God’s timing is never wrong. During pandemic, the shopping malls shortened their opening hours and only operated from 1 pm to 8 pm.

“Our church service is 10 am. If we had stayed in the shopping mall, there would be no electricity and air-conditioning,” the pastor explains. The new location is an office space, and the church has 24-hour access.

“We don’t have to worry about the crowd in the shopping mall. There’s nobody around because all the offices are closed, and everyone is working from home, so it is safer for our team to do the online service,” he shares. “God knows (the future) better than us.”

CREATING WAYS TO ENGAGE THEIR MEMBERS

One of the challenges for the church during the pandemic is the lack of Internet connection. “Our members in Bukit Doa are not really digitally savvy,” Pastor Tina shares. “Some of them don’t even have smartphones, so it’s hard for them to join in the online service.” For those who have access to the Internet, IHC started a daily morning devotion. “Every day, we would have video devotions sent to the members’ chat group on WhatsApp. This month, our theme is faith. Two months ago, the theme was prayer. We try to teach our members as much as we can.”

Even though many of her members had lost their jobs, Pastor Tina also received several praise reports.

Since she was working from home, she took the opportunity to start selling homemade cakes and desserts. “The business is good and (the proceeds) really helped the family. Now that she is back in the office two to three days a week, but she continues this business.”

The lockdown turned out to be a blessing in disguise to some. Most of the members are usually so busy with work that they forget to spend time with their family. “Now that they work from home, they have time to try activities at home. Some of them send me photos of them cooking together, or having badminton competitions,” she shares.

Pastor Tina has faith that in the aftermath of this pandemic, there will be a big revival. “We see it in the Bible. God is always doing something because He really loves us. Even during Noah’s time when He was very upset with the people, He’s always trying to show more love than His anger. So we believe, that after this pandemic, we are going to have revival,” she encourages.

“In this big pandemic, we must try to see the love of God. God will never let us down. He has already saved us; He will not withhold other things.”

WHAT TO PRAY FOR INDONESIA

Indonesia celebrated its 76th Independence Day on Aug 17. One thing that we can do for our Indonesian brothers and sisters is to pray for their nation. Here are their prayer requests: