British Hainan @ Kallang Way offers the best of classic British dishes with a Hainanese flavour. It also offers ex-offenders a chance at building a career.

When you first walk into British Hainan @ Kallang Way, you are greeted by its warm and nostalgic decor complete with wood-panelled walls and wooden floorboards that remind you of a country cottage. A piano sits in the centre of the space and vintage posters hang on the walls, creating a cosy enclave wherein great food is served and enjoyed. British Hainan is named for the British cuisine it offers, which is prepared with a Hainanese sensibility. The restaurant’s signature dish is the Braised Oxtail Stew, where tender beef meets carrots, potatoes and celery in a hearty sauce that’s simply irresistible. It’s served with either bread or rice, a nice pairing for its strong umami flavours.

You won’t want to miss out on the Hainanese Pork Chop either, a battered pork loin slathered in sweet and sour sauce, served with peas and potatoes, today a classic Singapore classic dish that combines the best flavours of West and East. The British Hainan menu also comes with some classic British staples such as Fish and Chips, Rosemary Lamb Shank (so tender the meat falls off the bone) and Baby Back Ribs.

British Hainan first started out as a family business by Hainanese businessman Frederick Puah. The recipes we enjoy at British Hainan were passed down to him by his grandfather who worked on a British ship. Back in the colonial era, the Hainanese immigrants in Singapore worked primarily as chefs on British ships or British households. As Western ingredients were not easily found in Singapore, Frederick’s grandfather would create dishes using Asian ingredients and finished with a Western twist. And that’s how British Hainan was born. Hainanese Pork Chops are a must-try

A GOD-GIVEN VISION BROUGHT TO LIFE

Run by Pastor Don Wong of The New Charis Mission and his son, Daryl, who are members of City Harvest Church, they aim to bring dignity to ex-offenders by giving them job opportunities and a chance at a career. Ministry of Sozo run another restaurant D Place at Clifford Centre, which serves Western fare.

“Frederick already had outlets in Joo Chiat and Purvis Street and wanted to turn his branch at Kallang Way into something more than just a business,” explains Daryl. “At that time, God had given my family and I a vision to help ex-offenders and the marginalised to find jobs and restore their dignity.” It was a confluence of God-appointed circumstances that led to this collaboration with British Hainan.

This is one in a series of such opportunities for ex-offenders that Pastor Don has created. “My dad, being an ex-offender himself, felt the burden and vision to help others who have a similar past,” Daryl elaborates. “Having grown up in this ministry and being around ex-offenders from a young age, I believe that no one is beyond a second chance. Starting this company was truly putting that belief into action.”

The idea of taking on a restaurant during this season was something that never occurred to them. “But we prayed about it and asked God to direct our steps,” Daryl shares. “He opened doors for us, that we, by our own strength or might could not have done. From the very start, we saw His hand in this, guiding us through licenses, bringing us funds and even staff. We believe that if God started this, even though things may look horrible, if we are faithful, He will complete it and bring it to pass.”

He adds that ex-offenders are given jobs at British Hainan according to their skills sets and interests. Daryl (centre) with the staff of British Hainan @ Kallang Way

BUILDING A CAREER FOR EX-OFFENDERS

“There’s a certain taboo attached to working with ex-offenders,” admits Daryl. “Many people are scared of what they might bring to the job, such as their old bad habits or their past. But none of them are defined by their past. We believe that they all have something unique to bring to the table.”

He emphasises that ex-offenders are not so different from everyone else. “We’re all on this journey in life where we’re constantly learning how to be a better version of ourselves,” he points out. “They have come a long way to be where they are now and I think even more so, we should respect their decision to make an honest living for themselves.”

“Working with them has helped me to understand that it doesn’t matter what capabilities you possess or what you’ve done in the past,” he continues. “As long as you come with a willing heart, a humble heart, anyone can learn how to operate a restaurant, to do a job just like anyone else.”

Isaiah 61:1-3 says “to bring good news to the poor; he has sent me to bind up the brokenhearted, to proclaim liberty to the captives, and the opening of the prison to those who are bound… to give them a beautiful headdress instead of ashes, the oil of gladness instead of mourning, the garment of praise instead of a faint spirit; that they may be called oaks of righteousness.”

It is this verse that has compelled Daryl and his father to bring change to these ex-offenders lives, hoping that their testimonies will be the fifth gospel preached to the lost.

Says Daryl, “We want for them to be Oaks of Righteousness that will show off His splendour and glorify God. This company is just another avenue to express this vision and purpose in our lives.”

GROWING INTO THEIR JOBS

As co-owner, 22-year-old Daryl oversees the day-to-day operations of British Hainan @ Kallang Way, while in his second year of studies at the Singapore Management University. Although young, he has trained employees almost 40 years his senior and has seen them grow through their milestones in their time working with him.

“I see them taking up new responsibilities,” he notes. “They wouldn’t dare do that if they were still dabbling in their old habits. Many of our ex-offenders have no formal education or any experience in doing F&B. But when they come in, they are willing to learn, adapt and take the feedback that people give them. All to become a better cook, chef, waiter or server. They also learn a lot of people skills, like how to deal with difficult customers, how to facilitate and adapt to every good and bad thing that can happen while running a restaurant.” 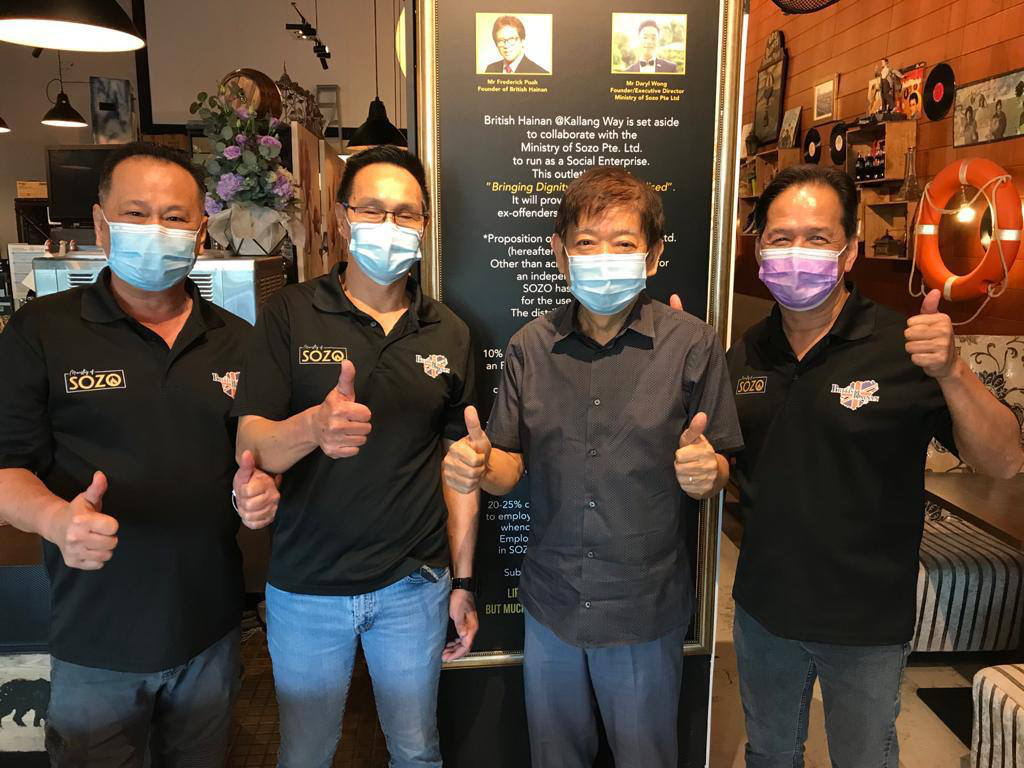 Age is no barrier to learning, says Daryl. “Three of our servers are all above 60. They started off not knowing how to use technology, but they were willing to take up the task of learning. At first they found it daunting and made mistakes, but they persisted and learned how to manage the cashiering and ordering system which are all electronic. Now, they are very proficient in it and they don’t need us to guide them at all.”

Taking on such a huge responsibility at such a young age is an unusual arrangement, but Daryl takes it in his stride. “Aside from giving me a learning experience, my father has also allowed me to grow by running the restaurant and the Ministry of Sozo. I know I’m young and I don’t have much experience, but he’s provided me with an outlet to take a fall, so I can pick myself up. For my sister, who is also learning the inner workings of the business, this was something of a birthday gift to her—we made her one of the directors of the company.”

Pastor Don is building a legacy not just with the ex-offenders he works with but his own children.

“My dad strongly believes that God is a God of legacy and generations,” explains Daryl. “It’s a chance for him to leave a legacy to us and for us to learn how to take responsibility in the real world. More than that, it’s about having and passing on the heart to help others. Because this company was started to help others—ex-offenders, the marginalised, and those who don’t have a chance in life. My whole family believes strongly in that vision—this company wasn’t started for profit or to make ourselves feel good, but it was founded with a purpose to help the lost.”

Besides providing ex-offenders with job opportunities, Daryl is also looking into rewarding those who have displayed good character and service with shares of the company.

“When we say ‘dignity’ we have this vision that these men will be able to tell their children or family members that they’ve turned over a new leaf, and that they are now co-owners or shareholders of a company. When their family sees that their lives have completely changed, it cements the fact that their sons, brother, fathers are on the right path.”

British Hainan @ Kallang Way is open daily from 11am-3pm and 6pm-10pm, and closed on Tuesdays.

Daniel Teh At TEDxNTU: Honoring Those With Special...