Who’s Too Old To Do CrossFit? Not These Seniors!

CrossFit for senior citizens? Yes, you heard right. It’s happening every week at House of JOY.

A row of fitness enthusiasts stand in a row in front of workout mats at Innervate Fitness. At the command of their instructor, they simultaneously sink into the deepest squat they can muster. 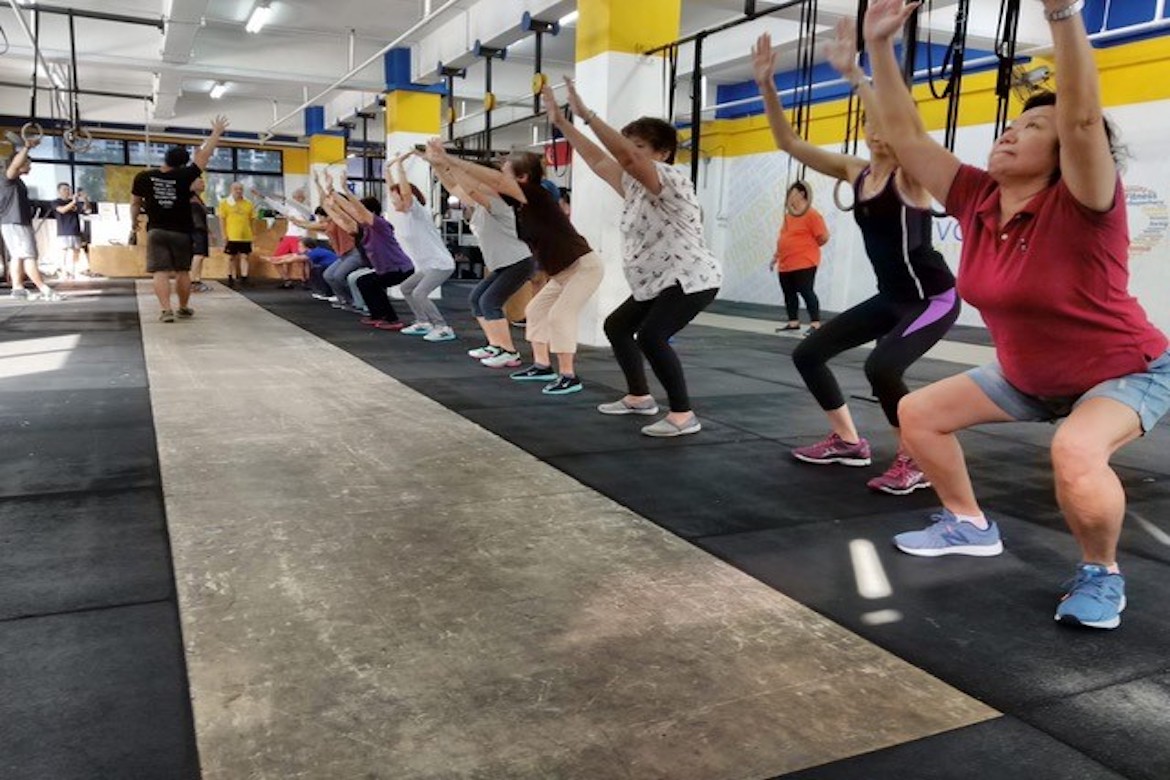 CrossFit is not for the faint-hearted: it is a workout that combines a variety of functional exercises in high-intensity interval training including countless burpees, squats, lifts, pushups and much more. It brings on rivers of sweat and yes, sometimes, tears. The word “CrossFit” used in conjunction with “elderly” seems like an oxymoron. Except it’s not. Not for the elderly at HOJ.

The session at Innervate was a special outing that marked the end of the first season of Silver CrossFit. Now in its second run, Silver CrossFit happens very week on Tuesday: 16  seniors turn up at House of JOY, a senior activity center run by City Harvest Community Service Association for a half hour workout. The Silver CrossFit program was started in June this year and is run by the team from Innervate Fitness.

“At HOJ, we aim to promote active aging,” explains Tammy Lim, who oversees volunteers at CHCSA. “We want to go beyond the usual active aging program and let the seniors try something they would never normally dare to try. We did a survey and found that there was potential for our elderly residents to do more intense exercises to strengthen their muscles.”

After the age of 30, a person starts losing muscle mass and decline is rapid after the age of 60. That, coupled with the lack of physical activity, will cause an elderly person to become frail. So it’s key for seniors to strengthen their muscles in order to lead an active lifestyle as they age. To ensure that the elderly residents receive enough nutrition, HOJ also serves bowls of traditional soup after each workout session.

The Silver CrossFit program is now in its second run and by now, most of the elderly participants have mastered their squats. They have come a long way.

BUILDING UP FROM TINY STEPS

“The first lesson was an eye-opener for me,” says Victor Wong, HOJ’s program executive. “One of the elderly ladies was quite resistant to the exercises until their trainer, Lionel Choong, taught them to the right position to assume by rotating around and pivoting on their knee. There is actually a correct posture to get up from the ground.”

It is no surprise that at the beginning, the seniors found the exercises intimidating. Most of them refused to sit on the floor, afraid that they couldn’t stand up again. But Lionel helped them overcome these small barriers: once they learned the correct method to get up from the floor, they became more confident of doing exercises to strengthen their lower body, which contains the group of muscles they depend on most. 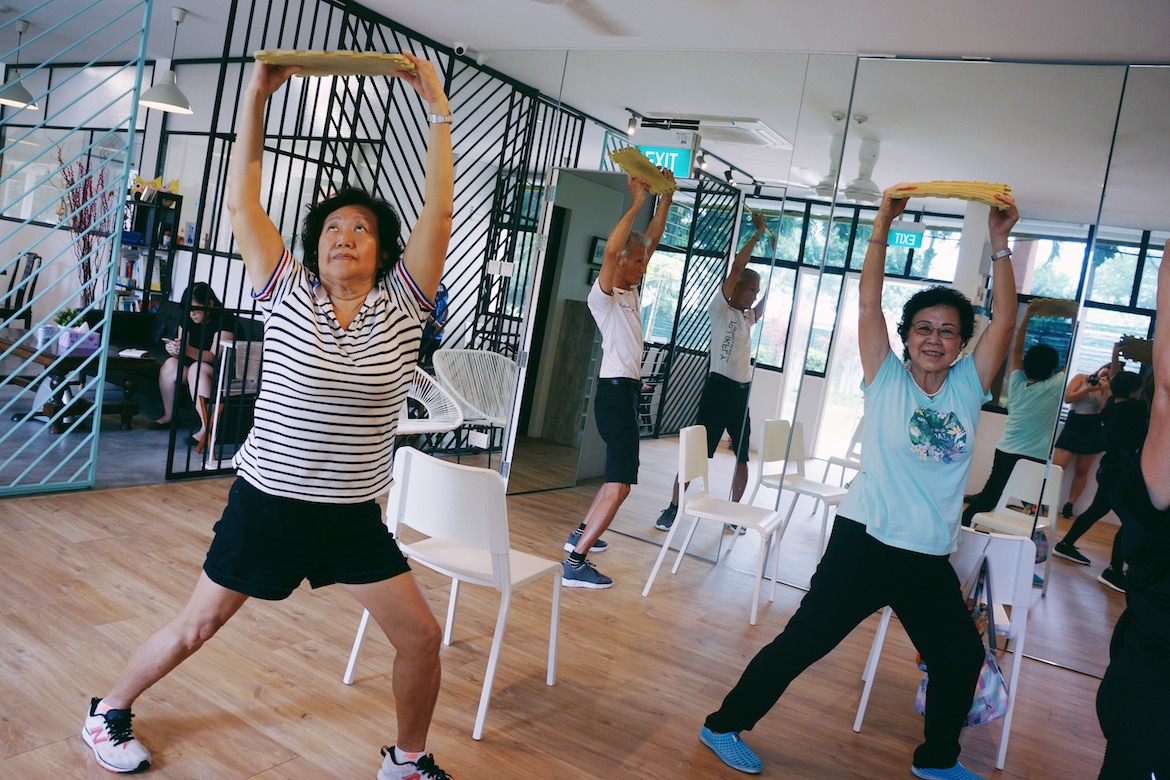 “It has been a very long journey,” says Lionel who is their regular trainer.  “When I first came, we started by simply trying to get off a chair without assistance. After that, I got them to do a squat without holding on to anything. Eventually, they mastered that, and we slowly built from there.

“It’s always a step at a time, what they can achieve and what they can do next. But not all the participants progress at the same rate, so we keep the movements scalable. This means that they can continue using the chair if they think they can’t do without. That’s perfectly okay because everyone progresses at their own time.”

Lionel is the co-founder of Innervate Fitness, a social enterprise that aims to use fitness to do social good. The fitness center also runs its own successful program introducing CrossFit to seniors.

At the last lesson of the first run, Lionel brought his class to Innervate Fitness to show them what they could achieve. The participants got to work with sophisticated gym equipment like lifting bars and a three kg medicine ball.

EVERYONE CAN BENEFIT FROM CROSSFIT, ESPECIALLY THE ELDERLY 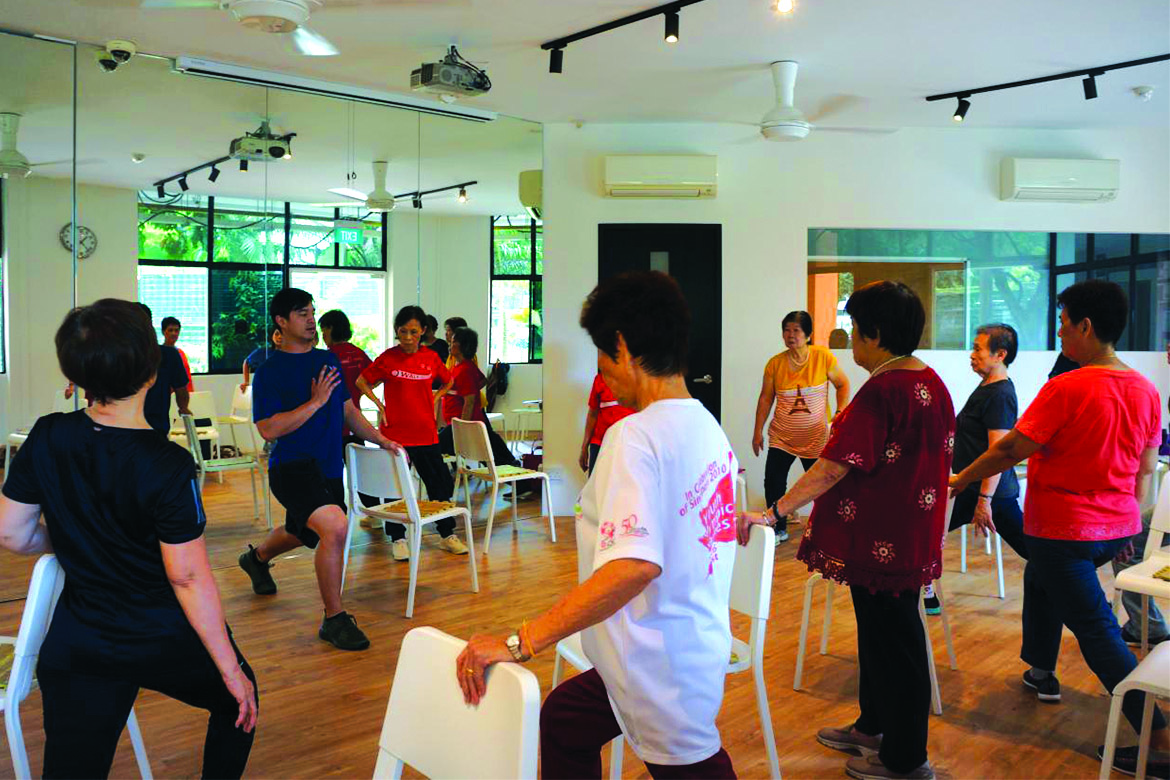 “I think a big misconception of CrossFit is that it is very intense and very fierce. But its essence is basically teaching people how to move properly and how to function,” says Lionel. “The focus of the workout on the movement. Their glutes, leg and hip muscles become a lot stronger and more flexible. That’s because they don’t typically move through that range of motion. How often do you see an elderly person get up from the floor? The fact that they are doing that means they are training that range of motion.”

Lionel reveals that he did not modify the movements used in CrossFit, but simply reduce the range to make it easier for his HOJ clients. 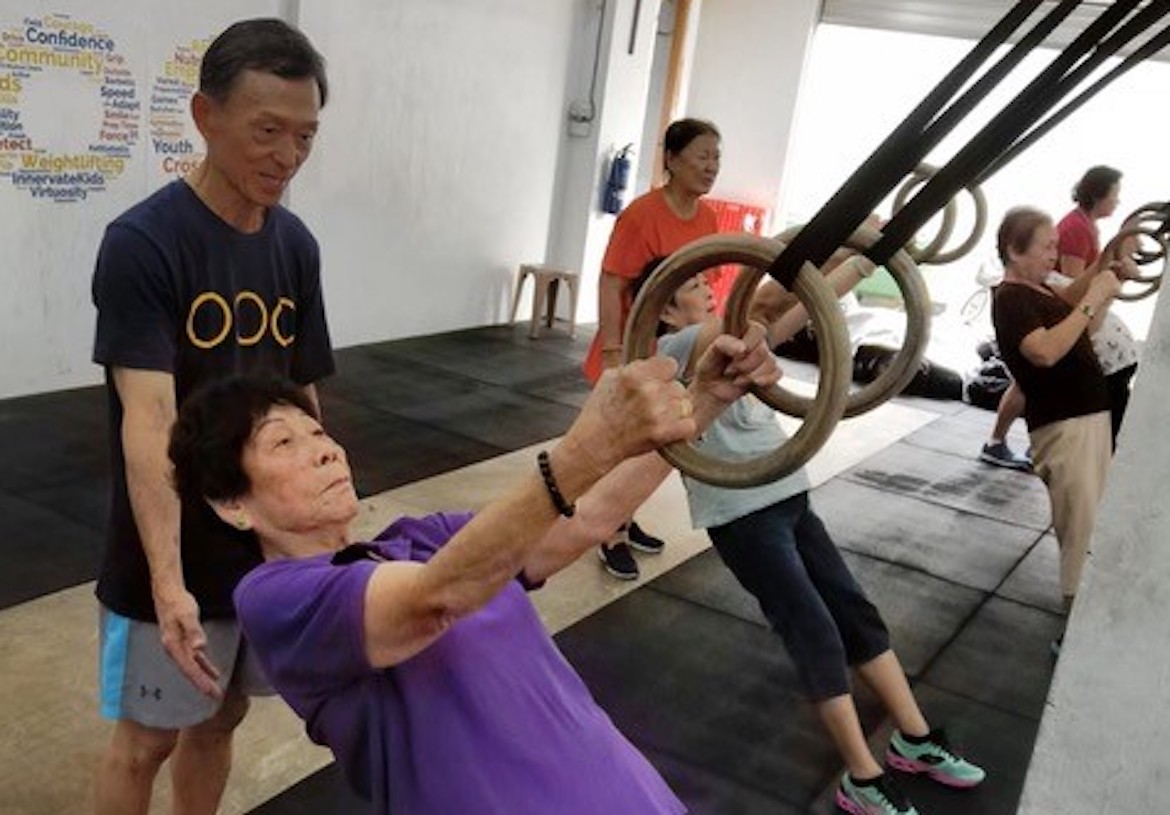 Now, after almost 20 lessons since June, the elderly participants are in better shape than ever. “They are definitely fitter,” Lionel says. “All the moving and sweating is definitely beneficial to them. Think of a person who can’t get up from the floor versus the person who can—the one who can is able to live a more fruitful life.

“The most important thing to me is they build their confidence. Because they are now able to live a bit more without restrictions.”

The elderly folks have seen the benefits too. “I used to have problems with my shoulder, but after doing CrossFit, I feel the muscles loosen,” says 71-year-old Bok Ching Hai, in Mandarin.

“The instructor taught us many movements that we don’t usually do at home. For example, he taught us the proper way to squat: to first stick out our buttocks and then spread out the knees. It comes in useful when we need to bend down and lift things up. That way, we don’t hurt ourselves.”

“My body used to be very tense, but after working out, my body become stronger,” says Mok Chuen Fong, 69. “I think as long as we move, it is beneficial for us.”

Victor says that the program started with five participants. After experiencing the benefits of CrossFit training, the early adopted spread the word and more people signed up.

Besides CrossFit, HOJ also provides other fitness classes like dance, cycling and chair yoga. There are also English lessons and singing lessons for those who are less interested in programs other than fitness.