Kong Caijuan: “The Love Of Jesus Has Transformed My Father’s Life Completely “

Kong Caijuan is a pastoral supervisor in CHC’s Chinese service. She shares how God restored her relationship with her father and healed him physically and emotionally.

During this COVID-19 season, I have spent more time in solitude, reflection and prayer in God’s presence. As I spent time with Him, I felt the Holy Spirit leading me to reach out to my family.

Growing up, I knew my father to be a responsible man who provided for the family. However, he was also a very strict disciplinarian, and I had always been fearful of him. Because of that, we’ve never had a close or loving relationship as father and daughter.

In the last few months, my father’s work was badly affected by COVID-19, and he began to suffer from terrible anxiety. He started to have breathing difficulty and insomnia, and he became constantly frustrated. The worst thing was he would vent his anger at us, causing the relationships in our family to grow even more strained.

This string of unhappy events affected me greatly. Though I’ve been praying for my father’s salvation for nearly 15 years, I felt completely helpless. The situation had not changed and I could only turn to God and seek Him.

While I was waiting on the Holy Spirit one day, I felt Him asking me, “Caijuan, don’t you like to cook for others? Why don’t you cook for your father too?”

My immediate reply was, “My father won’t eat it and I’m too scared to cook for him!”

The Holy Spirit was undeterred. He went on saying, “Don’t you always accompany your cell group members when they need to go for checkups at the hospital? You can bring your father to the doctor too, to find the cause of his breathing difficulty.”

The Holy Spirit kept reminding me and encouraging me to take the next step: to care for my dad in practical ways. I plucked up the courage to reach out to him and brought him to see different doctors for his condition. I would also initiate conversations with him.

Each time we visited the doctor, I would cook a meal for him. He would refuse to eat my home-cooked meals in the beginning, but he began to look forward to them after a while and even gave me tips on how to cook better! The initial awkwardness soon dissipated and we grew comfortable with each other.

After a while, I felt the Holy Spirit leading me to take a big step of faith to invite him to stay at my place so that I could take care of him. Up till then, my father has never stayed anywhere else other than his own home. He has never even visited my house. I was very surprised that he said yes.

In those 10 days, we ate, watched TV and bought groceries from the market together. We had the chance to have conversations about the past, his growing up years. We even had heart-to-heart talks.

We cried and laughed together. This had never happened before.

One day, as we were talking, he shared that he wasn’t a good son because he wasn’t filial to his parents. He became so emotional that he broke down in tears. I took the opportunity to share the gospel with him, telling him that God is love. I also told him that since both my grandparents were Christians, he will meet them in heaven one day.

Amazingly, he was so touched that he wanted to accept Christ and turn away from idol worship! That night, my cousin and I led my father in the Sinner’s Prayer and he accepted Jesus as his Lord and Savior.

For the first time in my life, I laid hands to pray for my father. I prayed for the Holy Spirit to fill and heal him, and to grant him peace. After praying, we both wept. I told him this was a day I will never forget. We were no longer strangers to one another.

The reconciliation with my father brought healing and peace to my heart. I know that my father could also feel my love for him. Since he was saved, my father has changed in so many ways. He is always smiling now, and we can converse naturally. He has a Bible that used to belong to my grandmother, and he reads it every day.

He tells me that he prays for the family every day. He also texted his elder brother to reconcile with him, putting aside years of hurt and resentment. Not only did God worked a miracle in his heart, but He also dealt with his health as well. My father no longer struggles with insomnia and breathing difficulty; he can now sleep with ease through the night. 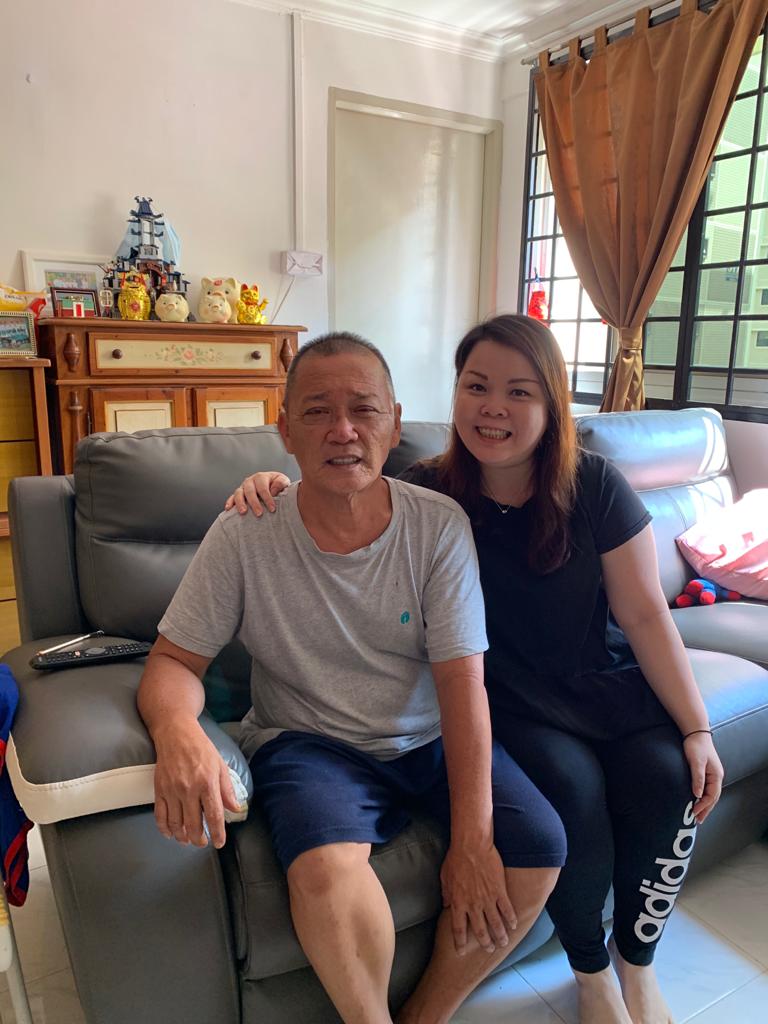 One day, I saw my dad in his room, kneeling with his mother’s Bible, praying, and listening to a worship song. I was so touched. That image will forever be etched in my heart because it shows how the love of Jesus has transformed my father’s life completely and restored my relationship with him.

My heart is filled with thanksgiving. I know this is all the work of the Holy Spirit, His grace upon my family. As I continue to believe, I can see my other family members becoming more open to Jesus in their lives. I know that God will keep moving in my family, and one day soon, my entire family will worship Him in church together!

This testimony is a transcript of a video first broadcast during CHC’s service of Dec 19-20, 2020