In the final instalment of the 2020 In Review series, City News looks at how three families experienced salvation during the pandemic.

In the future, when we look back at 2020, we will probably remember it as the year we were all stuck at home, thanks to COVID-19.

For Singaporeans, many of whom live in small housing development flats, being cooped up with the whole family for a long period of time can get very uncomfortable. For the two months of the Circuit Breaker, this was the reality. However, for some, this enforced time alone with their family presented a golden opportunity for them to reach out to their family members and share Jesus with them. By the grace of God, 2020 saw many elderly parents of City Harvest Church members come to accept Jesus as their Lord and Saviour.

For Amos Ang and his wife, Lee Seow Ting, the Circuit Breaker was a significant time in their lives. Amos is a worship leader in City Harvest’s worship team City Worship, while Seow Ting serves as a cell group leader and songwriter. For many years, Seow Ting and her sister, Seow Shi, also a member of CHC, have been praying for the salvation of their parents. Save for one occasion—when Seow Shi graduated from the School of Theology—their parents had always rejected their invitations to church. 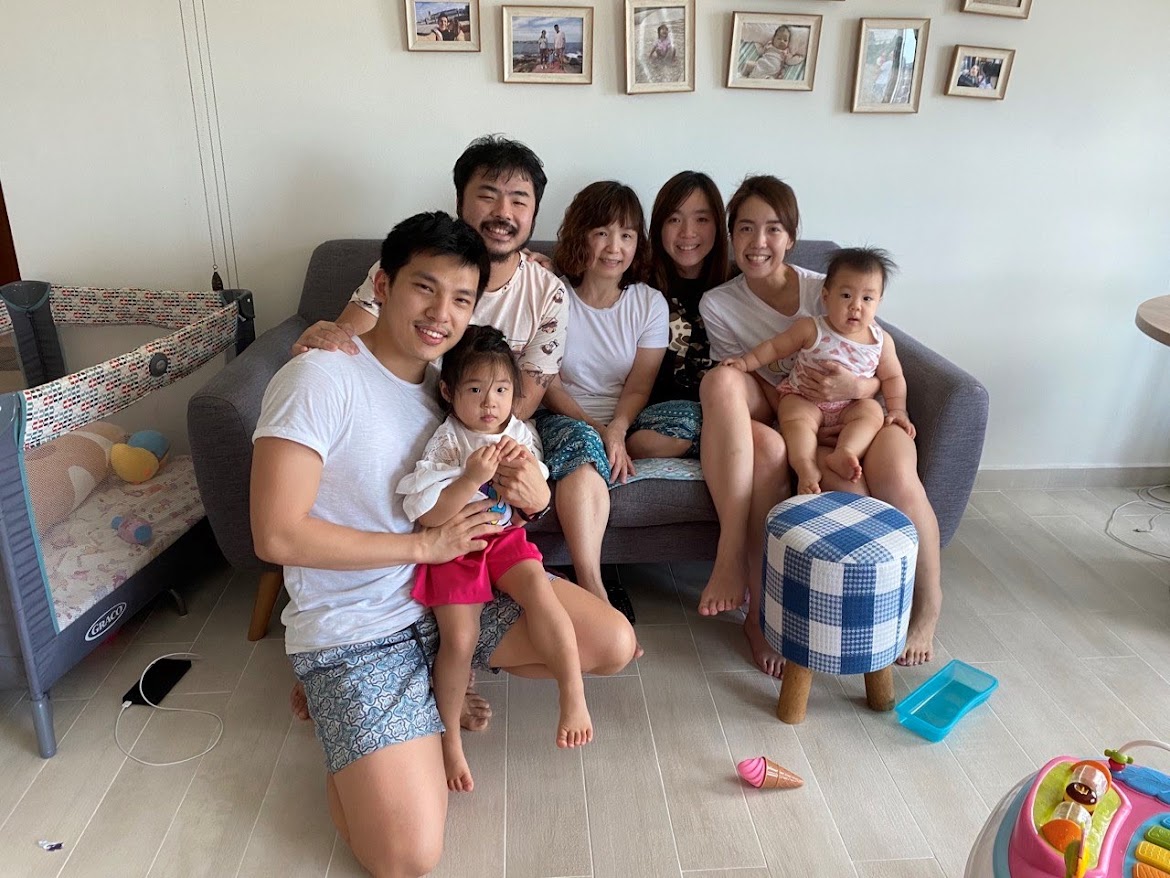 However, something wonderful happened to Seow Ting’s mother, Neo Chui Ngoh, in the most ordinary of circumstances.

In the midst of the Circuit Breaker, Mdm Neo moved to Seow Shi’s house to help her daughter to mind her young children. According to Seow Ting, Mdm Neo was constantly exposed to CHC’s worship sessions there.

“My sister would always play our worship music on YouTube in her home,” Seow Ting recalls. “So my mother would see Amos leading and hear songs such as ‘Pure As Gold’.”

“Pure As Gold” was written by Seow Ting some years ago. “So one day when Amos and I were visiting—it was a very ordinary afternoon—‘Pure As Gold’ came on. Amos told my mom that this is a song that I wrote and she said that it was very nice.”

When Amos found the Mandarin version, Mdm Neo was surprised that her own daughter’s songs were being translated and sung outside of Singapore.

“I wanted to make her very proud of Seow Ting,” Amos said. What happened next took them all by surprise.

“My mom said to me, ‘Your songs will bring about a healing touch. People will get goosebumps hearing it,” Seow Ting relates.

Sensing that her heart was open, the family took the chance to explain to Mdm Neo that the goosebumps she was feeling were the presence of God. They went on to share the gospel with her and led her in the Sinner’s Prayer.

From that moment on, Mdm Neo’s life experienced a major change.

“At the start, she still had a lot of questions and didn’t want to commit to joining a cell group,” Seow Shi says. “After a while, she began attending one of the online cell groups in the Chinese Service, and her cell group leader soon started to visit and give her Bible study.”

It was during these Bible study sessions that Mdm Neo found the answers to her questions and reaffirmed her salvation and said the Sinner’s Prayer again.

Speaking to City News in Mandarin, Mdm Neo shares about life after making Jesus her Lord and Saviour.

“Ever since coming to church, I have become a lot more positive. After getting to know my friends (in the cell group), I feel a lot of joy,” she says happily. “I’ve been reading the Bible a lot on my own. And the more I read, the more I want to know God!”

She adds, “I hope to be able to physically attend the worship services very soon!”

EXPERIENCING A CHANGE OF HEART

“My wife, Annie and her sister Angel received Christ when they were 19,” says Jeremy Choy, a pastor in CHC. “Their father, who was against Christianity, objected violently. He once gave them an ultimatum: if they didn’t renounce their faith and surrender their Bibles, he would disown them and throw them out of the house.”

Annie was undeterred. She had faith in the Lord and told Angel to keep praying for a miracle. Pastor Jeremy and Annie with their family

“They would always hear him shouting and banging things in the house,” shares Pastor Jeremy. “Annie plucked up courage to ask her father to allow them to stay as Christians. She told him that becoming Christians made them love him more.”

When their father heard that, he flew into a rage. The girls knew that they had no choice but to leave the house. As they were leaving, the Holy Spirit impressed upon Annie that when one is saved, the whole household is saved.

Annie’s father also blamed their mother for giving them the chance to become Christians. Their relationship became so strained that she too, eventually left her husband.

Annie, Angel, and her mother moved to a relative’s house. For the next 26 years, there was no contact with their father at all.

“Her father didn’t even attend our wedding,” recalls Pastor Jeremy. “But this year (in 2020), we received a text message from Annie’s aunt saying that she had met my father-in-law at the market and had a long chat with him. She said that he was a changed man and was now very receptive to Christ. He was also very sorry for what he had done to the girls and wanted to apologise to them.”

Annie found it hard to believe this at first because this came from the aunt that her father did not like. Pastor Jeremy adds, “But later on, the aunt sent us a video of her and her pastor talking to Annie’s father. The pastor asked my father-in-law to receive Jesus and he was willing. When we saw the video, we were blown away because we would never have believed such a thing could happen.”

Her aunt also told them that Annie’s father was not well physically and mentally. Pastor Jeremy and Annie’s brother decided then to visit him.

“We brought him to receive treatment and he was very receptive to us. We got Pastor Maria (Tok, the pastor who oversees CHC’s Dialect ministry) to minister to my father-in-law.” Annie’s father was water baptised together with two other members of the Dialect Service in December 2020.

When Annie and Angel went to visit their father, they were very surprised that he had mellowed a lot. He said that he was sorry for what he had done to their mother and them. “In that moment, we recognised that this was a miracle, the salvation of my father-in-law, that only God could have orchestrated. The promise that God gave Annie 26 years ago had finally come to pass.”

GOD CAME TO TAKE AWAY HIS WORRIES

CHC’s graphic executive, Phoebe Sung came to church at the age of 14. Her parents worshiped their ancestors and the gods their parents worshipped, and so they were uncomfortable with her becoming a Christian. 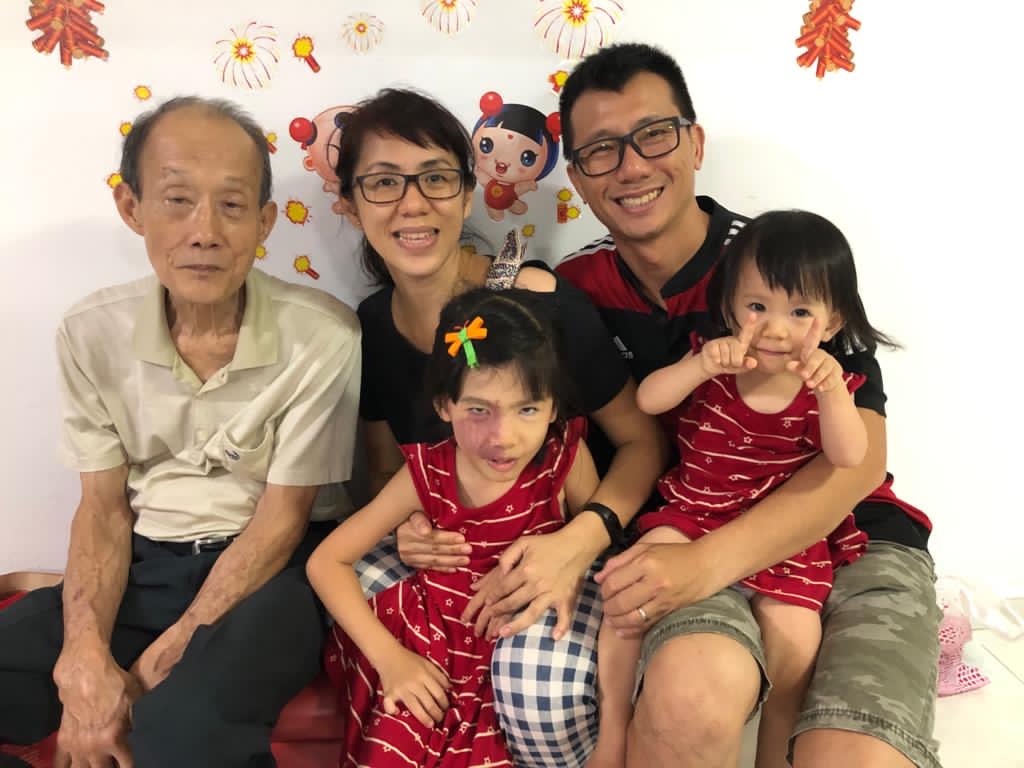 Phoebe with her family and her father

As she grew as a Christian, she wanted her parents to experience God like she had and invited them to church.

“They did come a few times, but didn’t commit themselves to God,” Phoebe remembers. “My dad would always say that every religion is the same and it doesn’t matter which God you believe in.”

In the middle of 2020, Phoebe’s father started to experience numbness in his feet. Being an active person, he was concerned for his health. The doctor found his heart was not functioning well and could not pump blood to his feet, thereby causing the numbness.

Even though his condition is not critical, Phoebe’s father was still worried. When Phoebe’s husband, Tan Kok Siang met with Glordia Goh, a pastor in CHC, he told her about his father-in-law’s situation. Pastor Glordia, in turn, called up Pastor Maria, who arranged to meet them at the hospital when Phoebe’s father went for a follow-up.

“Pastor Maria is really very good with the elderly. She came and talked to my dad and prayed for his healing. She shared with him about Jesus and asked if he wanted to receive Jesus. He agreed and she led him in the Sinner’s Prayer,” Phoebe recalls.

Phoebe’s father is currently on medication and recovering well. His life has returned to normal and his worry has faded away.

“He hasn’t joined Dialect Service’s Zoom meetings yet, but we will continue praying for him.”

Love Your Neighbor As Yourself: Aries Zulkarnain