Communing with God first thing in the morning sets each day right. Pastors Kong Hee and Sun Ho have been meeting more than 1,000 of City Harvest church members on Zoom to pray every morning at 6 am this past week, and it has proven transformative. “Now in the morning, having risen a long while before daylight, He went out and departed to a solitary place; and there He prayed,” reads Mark 1:35. This past week, more than 1,000 City Harvest Church members did just that: they were up predawn at 6am to pray.

Over two weeks, from Monday to Friday, CHC’s senior pastor, Kong Hee and his wife, Sun, lead the Early Morning Prayer Meeting with members through the CHC App. The Zoom chat room holds 1,000 participants on video, while another 400 members on average join in the meeting through the live audio feed.

On Wednesday, the prayer meeting was simultaneously interpreted to Mandarin so that the Chinese congregation could pray along. Bobby Chaw, the pastor overseeing the Chinese Service also led prayers in Mandarin.

WOULD YOU PRAY AN HOUR WITH ME?

Every morning, Pastor Kong and Sun begin with a time of worship, with Pastor strumming on his guitar. The setup is simple, but the presence is powerful. As the members linger in His presence, it is clear that the Lord shows up for many in their own rooms.

“I think worshipping early in the morning is peaceful; it’s very different from when we worship during service or any other times,” says Jerry Lee, a civil servant who logs in with his wife Viryana to pray each morning. “It’s literally the first thing we do in the morning and it helps put into action seeking God first in all things.”

Fellow member Erlean Joseph shares, “The highlight for the Early Morning Prayer Meeting is the simple worship led by Pastor Kong and Sun. The presence of God is so tangible. In fact, I can feel the kabod glory of God, a heaviness which glues me to my seat.” 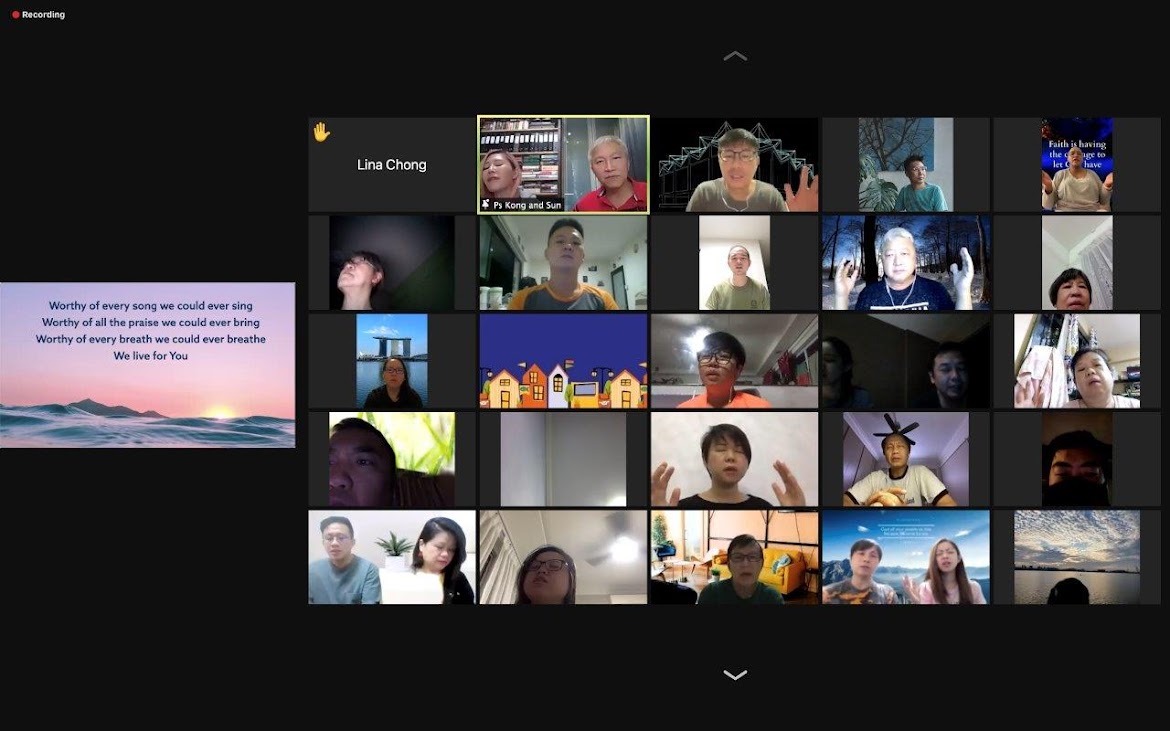 After worship, Pastor Kong and Sun would conduct a short devotion, sharing their personal encounters with God. Sun told of how CHC’s revival happened because of prayer. In the early days of the church, all the members were encouraged to pray for an hour every day but many of them couldn’t pray at home because they faced parental objection. The church then reserved a room in the church’s office—known as the Powerhouse—for the members to come and pray.

In the late ’80s, Christianity was not widespread in Singapore, but Sun and the pioneers of CHC had experienced God’s goodness and wanted their family and friends to experience the same thing. She prayed for her parent’s salvation for 14 years before they came to Christ. Now, all the family members of Pastor Kong and Sun are believers.

Quoting the familiar verse in James 5:16, “the effective, fervent prayer of a righteous man avails much, Pastor Kong encouraged the members to keep praying and trusting in God. “If things do not happen the way we want them to, we know that the grace of God is sufficient for us,” he said.

Sun acknowledged that she experiences disappointment at times when she does not receive the results she prayed for. “But I’d rather pray and be disappointed than stop believing. When I stop believing, I stop living,” she added.

THE BENEFITS OF PRAYING IN THE MORNING

The prayer meetings are accompanied by a set of Daily Devotions written by Pastor Kong. In it, he listed the benefits of praying early in the morning.

“Firstly, compared to other times of the day, it is often easiest to encounter God early in the morning,” he wrote. “Secondly, waking up early in the morning to pray and seek God’s face, is a tangible expression of our love for God and of our eagerness to meet with Him. We are telling Jesus that He is our number one priority, and God will always honour this kind of fervency, spiritual hunger and thirst (Mt 5:6; 6:33; Jas 5:16). I have found that early morning prayers realign my mind, heart and spirit like nothing else will. It gives me the supernatural grace, strength and energy to do my work for the rest of the day. Thirdly, it seems that God likes to reveal Himself in the morning. After all, Jesus is called ‘the Bright and Morning Star’ (Rev 22:16). The love and mercies of God are new every morning (Lam 3:22-23). Zephaniah 3:5 says, ‘Every morning He brings His justice to light; He never fails …’” 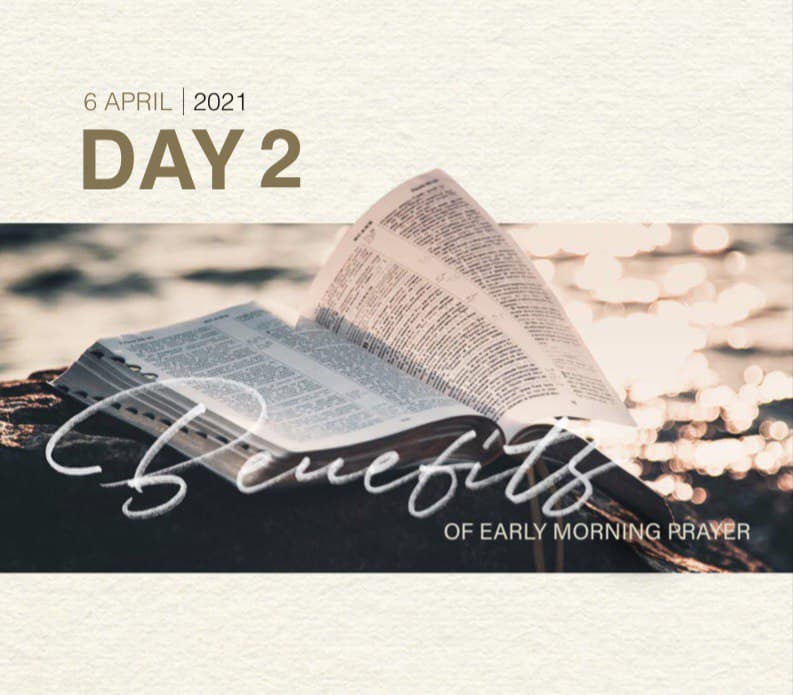 Jerry agrees. “We think it’s nice to put in that small effort to wake up early in the morning to join in the prayer meeting. It is also refreshing to connect with Pastor and Sun and pray together for our members. Even though it is through Zoom, we believe prayer connects everyone. Also to pray through the breaking of dawn, seeing the sunrise helps reminds us that God is always the same—He will always cause to the sun to rise on all of us.”

For Erlean, mornings in her household are hectic as she has to prepare food for her children to bring to school. “For the most part of Pastor’s sharing, I’ll only be listening to it while I prepare food in the kitchen. But once they start to pray, I’d drop everything and join my daughter and husband in the living room to allow God’s presence to minister to me. It’s very precious to feel His Love, hear His voice of comfort and encouragement at the start of the day,” she shares, adding, “It is also such a blessing to be able to intercede for the members as a church.”

Prayer is powerful and Olivia May Tay experienced it in a very real way.

“My husband and I, together with our friends in the cell group, have been praying for my son for a while now. I’ve invited him to church a few times but it doesn’t seem to touch his heart,” Olivia shares. “I know that God has His timing and we just have to keep on trusting Him. Last year, I felt the Lord told me that my son’s salvation is near, but I didn’t know exactly when it will happen.”

On Wednesday morning, when Pastor Kong started praying for family salvation, particularly for parents whose children are not believers, Olivia’s faith received a boost. “When Pastor Kong started praying, I just felt in the Spirit that my son would receive his salvation soon. That same day, he treated us to a meal because he had received his first salary. He had been going through a rough patch recently and was feeling a little down that day. We began to share with him about Jesus and shared some testimonies of how He helped us when we needed Him.”

There and then, Olivia felt that her son’s heart was open and asked him if he wanted to receive Jesus as His Lord and Saviour. “He said yes! I was so touched. My husband immediately led him to say the salvation prayer to receive Jesus into his heart!”

While they were praying, Olivia’s son felt a presence covering him from behind. “We were all very touched and I’m so happy for him,” she said.

To join in the Early Morning Prayer Meeting next week (12-16 April) from Monday to Friday, log on to https://www.chc.org.sg/morning/.