God took on full human nature in the person of Jesus Christ so that He could become our merciful and faithful high priest, taught Pastor Bobby Chaw in his message last weekend. He encouraged the church to be like Jesus and intercede for one another.

On Easter weekend, the senior pastor of City Harvest Church, Kong Hee reminded the church of the power of the cross. This past weekend (Apr 18 and 19) executive pastor Bobby Chaw built on that message, studying Jesus’ role as the perfect sacrifice as well as the merciful and faithful High Priest.

Pastor Bobby opened by explaining that an essential feature of the Christian faith is the belief in God as the Giver of life and the Creator of heaven and earth. The heroes of the Bible built their faith on that truth. Abraham knew that his body was as good as dead at 100 years old, and Sarah’s womb was also dead; yet Abraham believed that God, the Creator would give them a son (Romans 4:17-19). Prophets across the Old Testament, like Jeremiah, also declared that there is nothing too hard for God (Jeremiah 32:17).

When reciting the Apostles’ Creed, Christians declare that God is the “Father Almighty, Creator of heaven and earth”.

“With God, all things are possible,” declared Pastor Bobby. “Yet, in the Easter story, we see our Lord Jesus despised and rejected by man, a Man of sorrows, and acquainted with grief.”

Why would the all-powerful God leave the realm of the unlimited and eternal, and take on human flesh and blood to become one of us?

The answer is in Hebrews 2:17-18, said the pastor. The scriptures reveal that Jesus was fully human in every way so that He might become a merciful and faithful High Priest in service to God, and make atonement for the sins of humankind.

Reading John 11:15, Pastor Bobby said, “Only Jesus, the perfect sacrifice, can suffer the penalty and punishment for our sins, satisfying the demands of justice, so that God can justly forgive us.”

The pastor went on to elaborate on Jesus Christ as the merciful and faithful High Priest, who is able to represent the people fully before God.

JESUS IS MERCIFUL
Hebrews 2:18 (NIV) reads, “Because He Himself suffered when He was tempted, he is able to help those who are being tempted.”

In this verse, the word “help” is boētheō in Greek, which means “to run on hearing a cry, and to assist”. It describes a father running to a child to help him. “This is how Jesus will respond to our cry,” said Pastor Bobby.

The same word boētheō appeared in Mark 9:22, where Jesus met a desperate father whose son was tormented by an evil spirit. He asked Jesus if He can have compassion on them and come quickly to help him. Jesus responded, “If you can believe, all things are possible to him who believes.”

“Jesus will have compassion, Jesus will come quickly. Only believe,” exhorted Pastor Bobby. “Because Jesus is our merciful High Priest, He is not so far away that He cannot be touched by our infirmities. He is able and He will help us.”

Pastor Bobby shared his own experience with the merciful High Priest. Growing up in his uncle’s house with his grandmother, he often felt rejected when his uncle told others that Pastor Bobby was not his son.

Having spent his early years apart from them, Pastor Bobby gave his parents a very hard time when they wanted to bring him home at the age of six.

“My mother thought she had lost a son,” revealed Pastor Bobby. “The rejections and insecurities during those formative years affected me a lot. I struggled with low self-esteem and became socially awkward. Until I came to church and the Lord healed and delivered me from all my fears.”

At a prayer meeting, a church member prayed for him, Pastor Bobby recalled. “All she said was, ‘The Lord was there’ and I began to cry and cry.” In that moment, he was transported back in time to a childhood trauma he suffered.  He was in kindergarten and his aunt forgot to pick him up from school one day. All his classmates had left and the school was closing up. Standing all by himself outside his class, Pastor Bobby was in panic and fear, crying out for his aunt, but no one came.

As the church member prayed for him, he saw in his mind his young self crying. Suddenly, there came a big pair of hands from behind, reaching out and hugging him tightly.  Pastor Bobby heard the Lord say, “I was there! I was there!”

“When I did not know Him, then He already knew me,” said Pastor Bobby. When someone is going through a terrible storm, he tends to question if God understands his pain and plight, and if He can help.

“The answer is yes,” Pastor Bobby said encouragingly. “Jesus always runs to people when they cry for help, and all things are possible to those who believe.”

Pastor Bobby also pointed out that Jesus has compassion on those who are ignorant and going astray because He was also subjected to weakness (Heb 5:2).

“Compassion can only be learned in the school of suffering,” he said. “If you want to be merciful like Jesus, then you will need to be subjected to weakness and temptation. In hardship, don’t become bitter or resentful. Rather, cry out to Jesus, our very present help in trouble, and experience His mercy. So that we can show the same mercy to others around us.”

JESUS IS FAITHFUL
In Luke 22, Jesus was nearing the end of His earthly ministry. At the last supper, He told the disciples that His body would be broken, and His heart would be torn by betrayal. He also warned the disciples of the severe trials and temptations that were coming.

Verse 31 reads, “And the Lord said, ‘Simon, Simon! Indeed, Satan has asked for you, that may sift you as wheat.’” According to the New International Version, Jesus was not just referring to Simon Peter, but all the disciples. It was the darkest hour of their lives.

In the next verse, Jesus continued to say, “I have prayed for you, that your faith should not fail; and when you have returned to Me, strengthen your brethren.” “Jesus is our dependable high priest. He is dependable even in the darkest hour of our lives.”

Since then, Jesus had never stopped praying for His people. He is a faithful high priest who always lives to make intercession for those who come to God through Him (Heb 7:25).

Intercession is powerful. The Bible says that all believers are a royal priesthood. “So we must pray like Jesus, our High Priest,” said Pastor Bobby. “Never despise the prayers you make, no matter how small they may be.”

Aaron, who was more than a hundred years old, “ran into the midst of the assembly; and already the plague had begun among the people. So he put in the incense and made atonement for the people. And he stood between the dead and the living; so the plague was stopped.” (Num 16:47-48). This was an image of boētheō.

Pastor Bobby told the church to pray and intercede in this season of COVID-19 when people’s health and livelihoods are threatened, cities are paralyzed, and the future is uncertain.

THE POWER OF INTERCESSION
The pastor then shared a healing testimony of the brother of Zhou Lianyou, a student in this year’s cohort at School of Theology.

Last December, Lianyou’s brother suddenly fell ill and was later found in an unconscious state. On an ambulance to the city hospital, the paramedics found that he had stopped breathing. However, 10 minutes after he was pronounced dead, his heart started beating again.

At the hospital, the family was told to prepare for the worst. Lianyou informed his church members to start praying for the brother. His sister, who was in another city, also cried out to the Lord and declared that if Jesus could raise Lazarus from the dead, He can also bring her brother back to life. 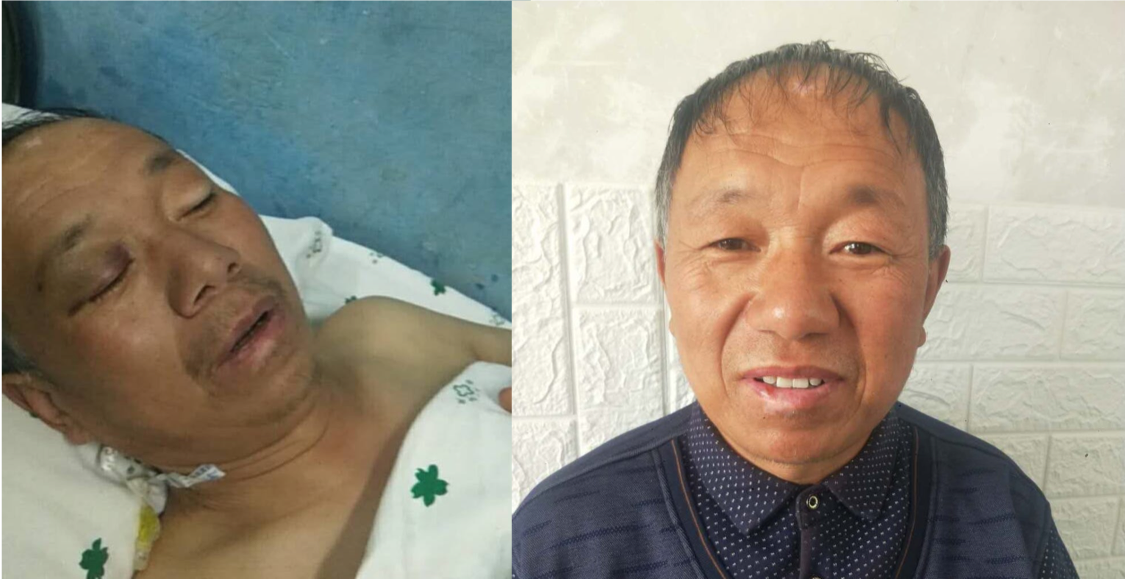 Lianyou’s brother was in critical condition, but miraculously recovered in 48 hours

IWithin 48 hours, the brother recovered fully. The MRI scans which followed showed that there was nothing wrong with him. This came as a surprise to the ambulance driver, who asked Lianyou, “What kind of God do you pray to?”

“No matter how dark the situation may be, intercession is powerful,” preached Pastor Bobby. “Jesus always prays for us, name by name.” Isaiah 49:15-16 says that God will not forget His people, for He has inscribed them on the palms of His hands.

“Let us imitate Jesus. Let us be a faithful, merciful, praying priest before the Lord,” said Pastor Bobby. “God took on human nature, full human nature in the person of Jesus Christ so that He could become our merciful and faithful High Priest.”

At the end of the sermon, Pastor Bobby prayed for those who are going through a difficult period of their lives. He reminded them that when they cry out to Jesus, He will come running to them and be with them.