In The Wilderness, Hold On To Faith, Hope And Love: Bobby Chaw

The wilderness experience is a painful yet necessary encounter. It is the place where one can reflect on himself and experience the nearness of God. In last weekend’s sermon, Pastor Bobby Chaw taught the church to lean on Jesus in the wilderness.

On the weekend of 10 and 11 Sep, executive pastor of City Harvest Church, Bobby Chaw taught the church how to navigate through troubling times with the Holy Spirit by holding on to faith, hope and love. 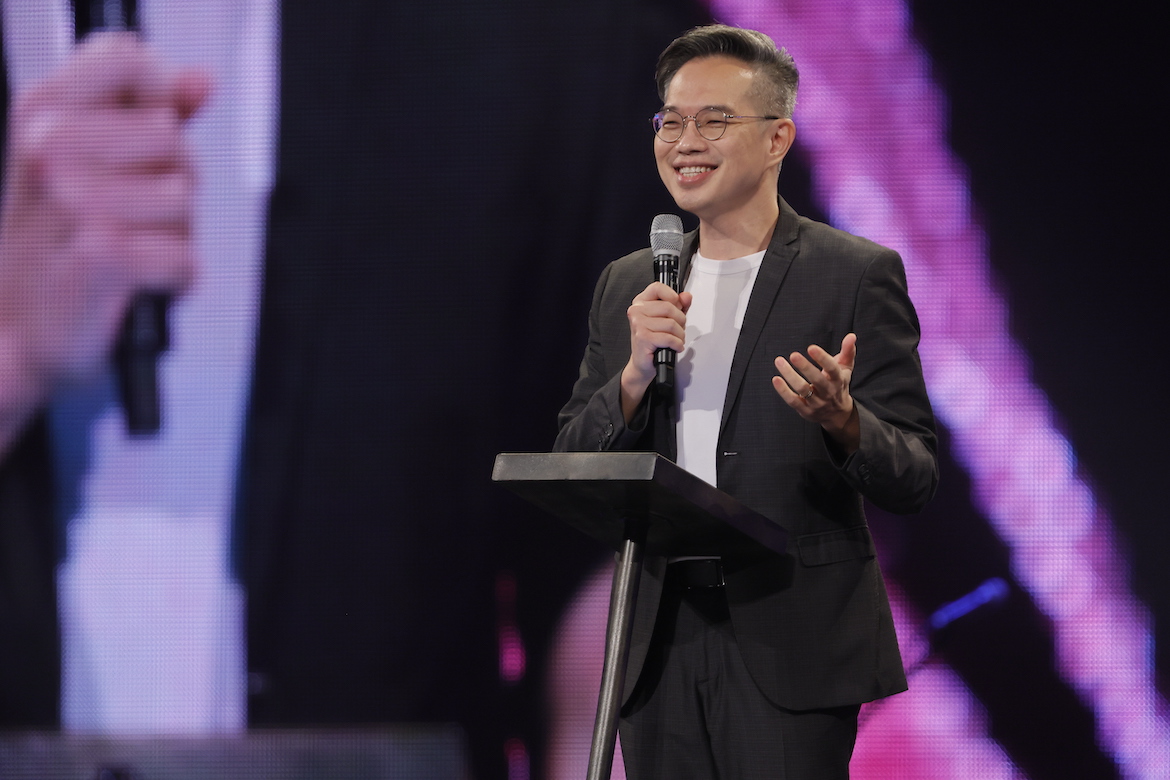 In today’s turbulent times, life is often filled with conflicts, diseases, depression and other crises. “Yet, the Bible tells us that in every situation, we can walk in the peace of God. Why? Because the Lord is here,” Pastor Bobby taught. The secret to inner peace in a hostile world is the presence of the Holy Spirit.

Reading Romans 8:37, Pastor Bobby encouraged the church members that they too can rise from the wilderness and overcome life’s challenges, as long as they lean on Jesus.

WHY BELIEVERS GO THROUGH SUFFERING AND TRIALS

Pastor Bobby proposed two reasons God allows believers to go through suffering and trials for two reasons. Firstly, it is to evoke their sense of self-awareness. Reading Deuteronomy 8:2, Pastor Bobby shared trials are meant to “test you in order to know what was in your hearts”. Since God already knows all things, the trials are there to show the believer what is in his own hearts.

It is not unusual for Christians to believe something about themselves, only to come face to face with the hard truth during a crisis. In Matthew 26:35, Peter and the other disciples proclaimed that they would love Jesus even if they had to die for Him. Yet, just hours later, when the Roman soldiers came to take Jesus away, these same disciples fled. What’s more, Peter openly denied Jesus three times.

“The disciples thought they were brave and committed to Jesus. But the trials revealed the fear and unbelief in their hearts,” the pastor noted. “Without a test, we may be living in an illusion and not realise it.” Pastor Bobby emphasised that the Holy Spirit wants to unveil the contents of the believer’s heart because otherwise, change and repentance would be impossible.

“The important question is ‘What is God showing me in this crisis?’” the pastor continued. He encouraged the church not to complain or blame others for the situation they are in, but to be brave to own up to their weaknesses and repent.

Secondly, the wilderness experience evokes the awareness of God. Pastor Bobby noted that the darkest moments of life can also be the most treasured moments because it is when one experiences the nearness of God.

In Numbers 1:1 and 1:19, the Bible recorded that the Lord spoke to Moses in the wilderness on multiple occasions. Pastor Bobby shared that in the most difficult seasons of a believer’s life, God draws them away from the busyness of life to reveal to them the conditions of their hearts and to remove every sin and distraction that hinders them from hearing His voice.

To receive the Word of God, one must open their heart and listen to Him actively. The pastor cautioned the church to not become jaded and cynical about God’s promises, or they will never hear the voice of God. Instead, they need to see the wilderness as a golden opportunity to experience God and allow Him to turn their test into a testimony.

Pastor Bobby then shared a crisis his family went through. When his sister was in her second trimester, tests showed that the baby in her womb had a high chance of being born with severe deformities. Hence, her doctor advised her to terminate the pregnancy. When Pastor Bobby and his wife Cindy, heard this news, they encouraged his sister to carry the baby to term, with the promise that should the child be born with any disability, they would help her to care for him or her. They chose to stand firm in their faith and prayed fervently for his sister day and night.

Today, his niece is a perfectly healthy 18-year-old teenager. With this testimony, Pastor Bobby encouraged the church to hold on to faith when navigating through difficulties, because God will always speak into their situation. The church must learn to lean on God in order to experience His nearness.

“To lean onto Jesus, our Beloved, there are three things you must hold on to: faith, hope and love,” the pastor declared.

2 Corinthians 5 reads, “We live by faith, not by sight.” Pastor Bobby shared the story of the daughters of Zelophehad. Their father had died with no sons and five daughters. According to their custom, having no male descendants would mean that the family would not possess any land.

But the five daughters held on to the promise of God that they would enter into the Promised Land and have a part in it. They went to Moses to plead their case and asked for an inheritance. Moses brought the case to God and God agreed that they should be given property as their inheritance. Pastor Bobby noted that this went against the Jewish custom: “Nobody had done this before. The daughters of Zelophehad had a different spirit; they were not limited by their circumstances.”

At that point in time, the Israelites had not even entered the Promised Land, but the daughters of Zelophehad were focused on securing the promises of God in their lives—because they were led by faith and not by sight. “If you are in the wilderness today, you must be led by faith. This must be your story!” the pastor urged the church. Equally important is hope. “Hope is an earnest expectation,” Pastor Bobby defined. It is having one’s head raised and eyes lifted, anticipating that God will do what He promised. It is like a child whose father promised to bring him to the amusement park the next day—the child would be all excited the night before, waiting for his treat with irrepressible joy.

When the Israelites were in the wilderness, a tragic event happened. Korah and a company of 250 leaders rebelled against Moses and Aaron. As a result, the ground split apart and swallowed them up. This brought shame and infamy to their families. However, the sons of Korah did not allow their father’s sins to determine their future. They held on and eagerly waited for God’s grace. They wrote in Psalms 42, “As the deer pants for streams of water, so my soul pants for you, my God. My soul thirsts for the living God.”  Pastor Bobby urged the church to have hope, trusting that something good is going to happen.

He gave the example of Uncle Peh, an 81-year-old member of CHC’s Chinese Service. Although he is diabetic and cannot stand for long periods, he would faithfully turn up in church early to serve God as a greeter. “He is full of hope and joy, anticipating that God will show up in the service every week,” the pastor described. “This is what hope looks like. Even in the midst of sickness and pain, suffering and trauma, you anticipate with an expectation that something good is going to happen, because the Lord is here.”

In another example, Pastor Bobby shared that his own mother has a permanent appointment with God every morning—she would stick to a specific time to spend time with Him. To her, nothing and no one else is more important and she is steadfast about keeping to that appointment. Pastor Bobby proudly proclaimed that this is a stellar example of what hope looks like.

Pastor Bobby reminded the church not to lose hope regardless of their situation. “Let the Holy Spirit come and fill you with hope again,” he encouraged as he read Romans 15:13.

On his final point on love, Pastor Bobby shared that when Moses was leading the Israelites into the wilderness, his own siblings, Aaron, and Miriam criticised him and challenged his authority. But Moses did not answer a single accusation or handled their opposition with wrath. Not long after that, his sister Miriam became leprous, and Aaron asked Moses to pray for her healing. Moses did not hesitate to ask God for his sister’s complete healing—instead of being angry, he remained patient and kind.

Miriam was healed outwardly, but Moses was healed inwardly—his wounded heart was restored and healed. “If you are offended, the only way to find healing for your heart is to pray for your enemies,” Pastor Bobby noted. Luke 6:27, God reminded believers to “do good to those who hate you. Bless those who hurt you. Pray for those who mistreat you.”  In doing so, they abide in love just as Moses chose to abide in God’s love.

In conclusion, Pastor Bobby reminded the church that when they are going through the wilderness, they need to hold on to faith, hope and love. He prayed for the church to not be defeated by the hardships caused by the pandemic and for God to perform His mighty miracles. Chloe Lee is a young aspiring writer who enjoys reading since her memory kicked in. Besides reading, she is also an avid volleyball player and occasionally binge watch Netflix and anime series. She hopes to write for the church to draw herself and others closer to God.