Miracles In Leftovers And Fruitfulness Before Deliverance: Paul Scanlon

Preacher and friend of City Harvest Church Paul Scanlon returned with two powerful messages reminding the church to look beyond themselves and their circumstances. He hadn’t been back for four years, but Paul Scanlon, leadership trainer and founder of Life Church UK, gave two tough but relevant messages on the Father’s Day weekend, June 16 and 17.

LEFTOVERS: THE MIRACLE OF THE DISCARDED

On Saturday, Scanlon opened his message the feeding of the five thousand in John 6:5-13. Bringing the congregation’s attention to the mention in Scripture of  “leftovers”, Scanlon opened on his topic for the service.

“[Jesus] tests them,” said Scanlon, “because you always know more than you think you know, and God knows that you know more than you know.” Jesus was testing the disciples when He asked them to come up with a solution for feeding the 5,000. He wanted them to develop ideas of their own and not just fall in line and follow others’ ideas.

It was Andrew who came up with the idea of using the little boy’s five loaves and two fishes. After everyone had eaten, Jesus asked the disciples to collect the leftovers. Scanlon pointed out that Jesus was a miracle worker: He had not concern about keeping the leftovers for the next time. With this, the preacher gave the church a new perspective: Jesus was mindful of the people who were not there. 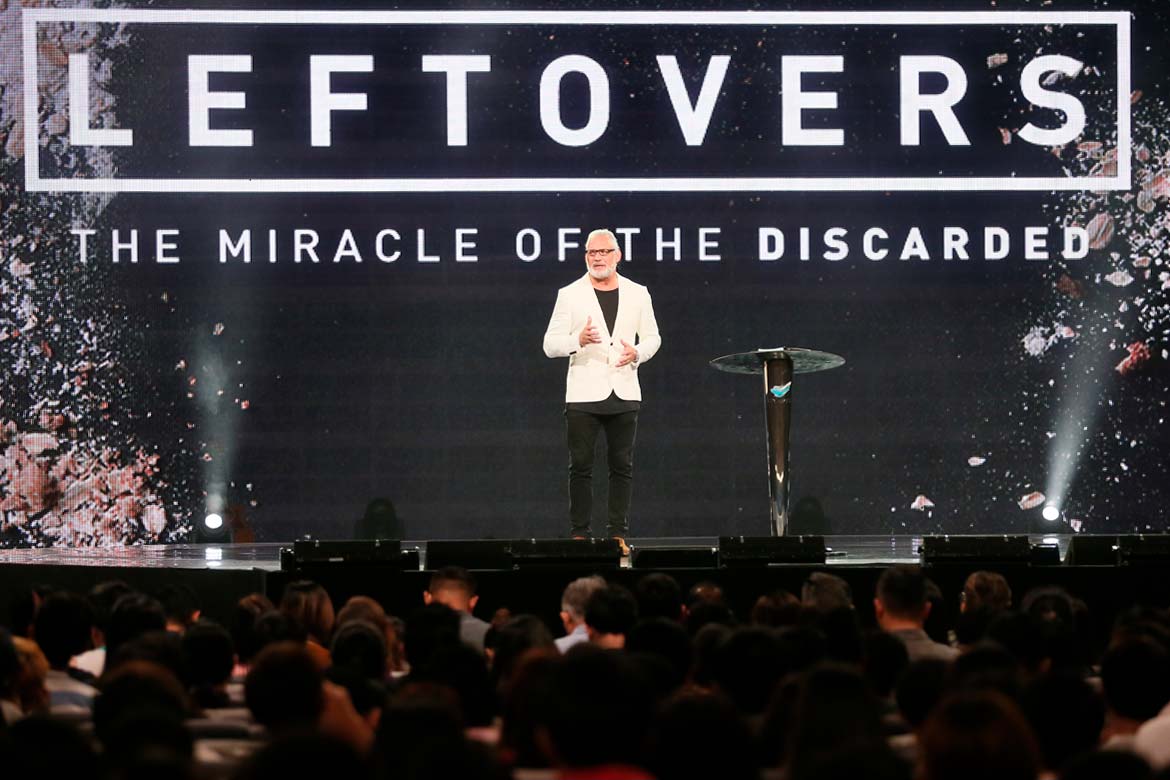 When one is saved and fed weekly on deep, spiritual messages, one can forget that once upon a time, one was hungry for even one such message. Scanlon pointed out that sometimes a church grows into a situation where the people have received so much, they forget to share it with people who truly need that word.

Not one to mince words, Scanlon said to the church: “Don’t be high- maintenance. Sometimes you need to let others know that you are okay and they should turn their attention to someone else who really needs it.”

The pastor reminded the church of what its original mission is: to reach the people whom no one else wants to reach. He reminded City Harvest Church of its call to be a “church without walls”, where members go into the “highways and hedges, and compel them to come in, that my house may be filled” (Luke 14:23). Scanlon’s Sunday morning message was based on a story in Genesis 48:8-20. Joseph had brought his two sons before his father Jacob so that he may pray for them. Instead of placing his right hand on Joseph’s firstborn son, Manasseh, Jacob placed it on Ephraim, his younger son. Joseph then tried to move his father’s hand, but Jacob told Joseph he knew what he was doing: Ephraim was to become greater than his brother.

Scanlon referenced the 2011 Matt Damon movie The Adjustment Bureau, in which the hero of the story comes against angels from the Adjustment Bureau that interfere in his life to ensure that his destiny is met. The preacher shared that Heaven has its own “adjustment bureau”. He gave the church a rundown of Joseph’s life: his brothers hated him because he told them of his dream that he would one day rule over them.

Scanlon reminded the congregation that, like us, the people in the Bible did not know the end of their stories when they were going through them. “Destiny cannot be understood unless you’re looking back on it,” he explained. “You only understand why things happen when you look back on your life.”

Joseph’s suffering led to the moment when he stood before Pharaoh and had to interpret his dream. Going beyond just interpreting, Joseph presented Pharaoh with a plan to save the nation: store up grain in the seven years of abundance and sell the grain to other nations when the seven years of famine hit. That moment changed Joseph’s life. Pharaoh made him his second-in-command, and in a matter of minutes, Joseph had climbed to a place of power and riches, wed to the Pharaoh’s daughter, dressed in Pharaoh’s clothes and being driven around by Pharaoh’s own horses.

Joseph’s solution for Egypt eventually led him to meet with his brothers. During the famine, Jacob sent his sons to Egypt, the only nation with grain. When Joseph revealed himself to his brothers, they thought he would take his revenge. But Joseph said to them, “What you had meant for evil, God had meant for good.”

Scanlon reflected: “This is the first time we see Joseph sharing how he viewed his own life.”

As was the custom at that time, Joseph named his two sons according to the seasons he was going through in his life. Manasseh meant “God has delivered me” and Ephraim meant “fruitfulness.”

Circling back to the moment where Joseph had his two sons seated with Jacob, Scanlon explained why Jacob crossed his hands when he blessed the two children.

“Heaven was making adjustments on how Joseph saw his life,” explained the preacher. “Joseph had named his eldest son after he was delivered from all his suffering and the second son when he thought he was fruitful. Joseph’s perspective was that God first ‘delivered’ him, then he became ‘fruitful’. But Jacob’s act was God’s way of saying that Joseph had it all wrong.

“As far as God is concerned, deliverance does not precede fruitfulness,” Scanlon declared. Fruitifulness is not dependent on one’s situation in life. Joseph had been fruitful before he was thrown into prison. He was leading a fruitful life even in prison. Genesis 40:5-23 recorded Joseph interpreting the chief baker and chief butler’s dreams. That interpretation eventually brought him before Pharaoh.

Scanlon reminded the church that circumstances do not limit one’s mission to become fruitful. Deliverance is not a pre-requisite for fruitfulness. He related the story of Steve, a homeless man in his church who had participated in a church program to offer free showers, shaves, haircuts and suits for the homeless. When Steve had had his makeover, Scanlon said to him, “You look like you’re going for a job interview.” Steve replied, “I just might.” And he did. In time, he got a regular job, his own home, his own car—being fruitful delivered him out of homelessness.

“Your fruitfulness will be the key to your deliverance,” he concluded. “It always has and always will be.”

The Crowning Sessions: Birthing A New Year In...