Carrying The Essence Of Christ To The COVID Frontline

As the fight against COVID-19 intensifies, how is Singapore adapting to the evolving battlefield? City News speaks to an operations officer at the Community Isolation Facility (CIF) at the Singapore Expo.

Singapore has seen a rise in its daily reported cases since early April. In a concerted effort to stop the spread, the government introduced the Circuit Breaker measure on April 3. This measure includes mandatory Work-From-Home (WFH) arrangements and strict limitations on leaving the house except for essential errands, work, and exercise.

Besides putting into place the Circuit Breaker in the community, the authorities have stepped up efforts on the frontline to reduce the strain on hospitals. A consortium of organisations came together to convert Singapore Expo and Changi Exhibition Centre into community isolation facilities (CIFs). D’Resort @Downtown East was the first CIF; together these three locations can house over 5,000 patients. WHAT IT’S LIKE AT SINGAPORE EXPO
Vincent Teo is a City Harvest Church member involved in the operations at Singapore Expo. He was initially deployed to set up the operations center at D’Resort, and later joined the operations command center of the Woodlands Health group to help run the Expo CIF.

“I just joined Woodlands Health Campus in March,” he says. “My original role was as an executive in building Resilient Community Neighbourhoods. When I joined the campus, that was when the COVID-19 situation started escalating.”

Vincent recalls, “On my 10th day on the job, my boss asked me if I would be comfortable to be deployed to a CIF. I replied that I would, as I felt that I could contribute in some way.”

Singapore Expo received its first batch of patients on April 9, four days after Health Minister Mr Gan Kim Yong first confirmed the facility preparations at Expo. Photos featured in TODAY at that time showed the halls in its initial stages of being set up.

THE HEAT OF BATTLE
“It was pretty intense during the initial days there because operations had just started and patients were coming in very fast,” Vincent recalls.

“I received a five-minute brief, was handed a walkie talkie and a duty phone, and I was out there running,” he says. “It was only when I was driving home that night, that it hit me what I had gone through that day. It was really shocking.”

Vincent’s team ensures that all logistics and needs are met, and replenished. The team members have to coordinate, with various parties, accurate and measurable responses for each situation that develops.

One such situation was when there were patients who had to be sent back to the hospital when they felt worse after settling down at Singapore Expo.

When the CIF at Expo was first open, it took up two halls housing 950 patients. Today, more halls are being converted to meet the growing number of cases. “From constructing the patient areas to the administrative and operations centers, everyone plays a part, and everyone contributes,” says Vincent of the singleminded efforts of the frontliners.

CHRIST IN CULTURE
The frontliners who sacrifice the most, Vincent feels, are the medical workers. He says, “Nurses and doctors—I’ve seen many with cuts on the bridge of their noses and around their ears, caused by wearing the N95 masks and goggles all day.  Most of them come out drenched in sweat after wearing the full PPE (Personal Protective Equipment) for hours and hours.”

Vincent adds, “The best I could do, while running each ops mission—settling the logistical matters—is to turn around and ask them how they are: ‘Have you eaten?’,  ‘Do you need anything?’, ‘Are you feeling okay?’” 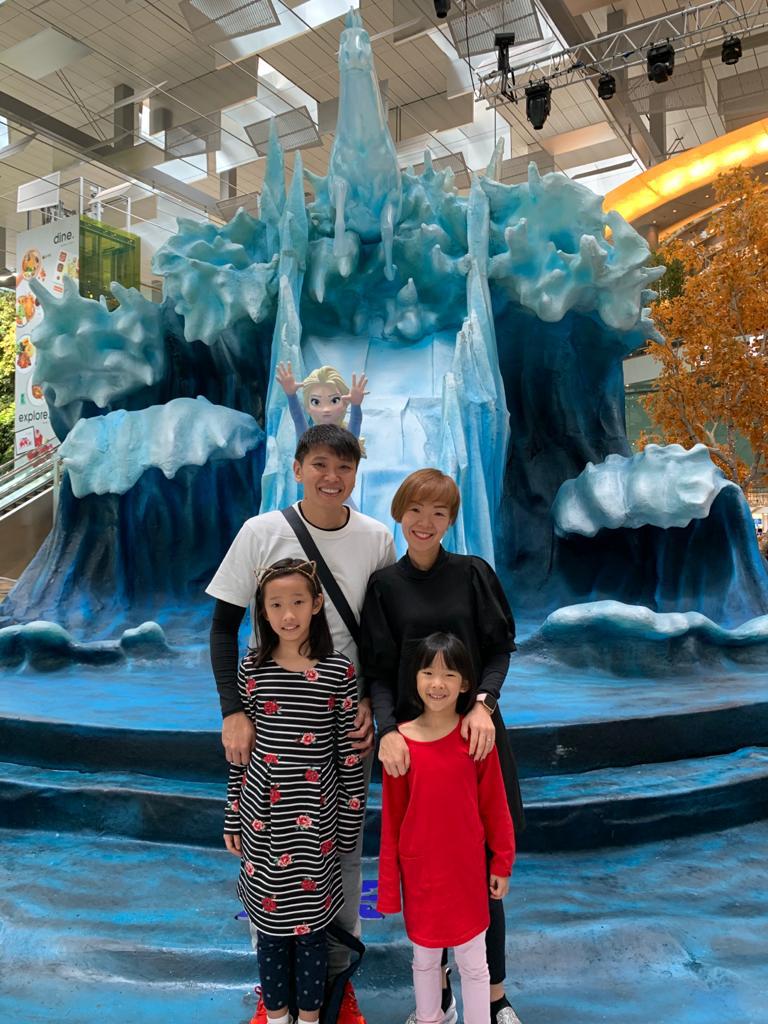 Vincent with his family in 2019

Being a Christian in the thick of the COVID-19 situation, Vincent is reminded of a CHC phrase: Kristos Kai Kosmos, or Christ in culture.

“We don’t have to tell everyone we are Christians, but it is important to be nice to everyone because that we carry the very essence of Christ, that is, to love one another,” he says. “I am not a doctor, or a nurse, and I don’t wear PPE or run in and out of the hall. But what I believe I can do, is to bring that touch of Christ into the place I am in and to make it the best place possible.”

Vincent feels that every bit of support helps during this period. A large facility at Tanjong Pagar Terminal is being constructed that can house up to 15,000 people to meet future needs. As needs grow, the workforce involved in this battle will be further stretched.

“Currently, many agencies are participating in this life-saving mission,” says Vincent. “So if I may say so, we need encouragement and support for everyone involved: the healthcare workers, frontline workers, support workers as well as the patients and the foreign workers who are affected.”