How To Stay In The Process Of God’s Promise: Lin Junxian

Some promises of God come to pass immediately. Others require one to go through a process before they are fulfilled. In last weekend’s sermon, Pastor Lin Junxian encouraged the church to do three things while remaining in this process.

On the weekend of 22 and 23 July, Pastor Lin Junxian preached a resonant sermon that gave the church much to chew on. He began simply enough with a story about three builders of Salisbury Cathedral in 1225. A curious traveller approached a group of workers and asked what they were doing. Without even looking up, the first man grumpily replied, “Can’t you see? I am cutting stone.” The second man replied that he came from the north to Salisbury, and all he wanted to do was to earn his 10 pounds and return home.

The traveller wished him well and approached the third man, who stopped what he was doing and stood up with a big smile, saying, “Sir, haven’t you heard? We’ve all gathered here together to build this magnificent cathedral in Salisbury. In time to come, I know that many people will come to find solace and solitude with God. Many ones will come and be blessed as they worship Jesus.”

Pastor Junxian noted, “All three builders were doing the same thing but only one builder had a different perspective of what he was doing and how that would affect the future.”

The Salisbury Cathedral was completed in 1258 and went on to survive two World Wars. Until today, it still holds multiple services every day for all to worship Jesus. In the midst of the pandemic, it was used as a vaccination centre.

“Maybe you’re like one of the workers in the story,” Pastor Junxian suggested. “The truth is sometimes we can get so used to the routine of life that we forget the significance of what God wants to do through our lives.”

Reading Proverbs 29:18, he reminded the church not to lose sight of God and His promises. He then asked the congregation to think about what they have been focusing on. “Everything that God does always begins in our heart. If we only look for God in the outward, we will miss what God is doing on the inward,” the pastor preached.

THE PROCESS IN THE PROMISE

Pastor Junxian then brought the church’s attention to the book of Isaiah. The name Isaiah means “Jehovah saves”. This meant that everywhere the prophet Isaiah went, people calling out to him are being reminded of God’s promise to save them when they turned to Him, regardless of the circumstances they were in. He read Isaiah 61:1-2, which ends with “to proclaim the acceptable year of the Lord”. This was the same Scripture that Jesus read in his first sermon (Lk 4:18). When Jesus had finished reading, He proclaimed that He had come to fulfil the Scriptures.

Some may argue that the last few years were not acceptable at all, given the pandemic that brought many challenges and difficulties. Pastor Junxian explained that the acceptable year of the Lord is not a calendar year. The word “acceptable” in Hebrew is “raw-tsone”, which means goodwill, favour, acceptance and will. “In other words, God is still at work. His kingdom is still coming, His will is still being done,” the pastor taught.

He reminded the people of the testimonies that came out of the church’s Emerge youth camps that happened in June. Many of them encountered God in an intimate and tangible way—broken hearts were mended, and those in bondage were set free. “We are still living in the acceptable year of the Lord. The outpouring of the Holy Spirit is still at work in our midst,” he shared.

Putting things into context, Pastor Junxian noted that it took 700 years from the time Isaiah gave the prophecy in Isaiah 61:1-2, to the time Jesus read the same passages. “I’m not saying that every prophecy takes 700 years to be fulfilled,” the pastor said. “But when we go through a challenging waiting process, the devil only has one aim and that is to break our relationship and our fellowship with God.”

How then should believers remain in the process of God’s promises? Pastor Junxian highlighted three ways to hold on to God in such times.

1. Release our past to God

Going back to Isaiah 61, Pastor Junxian explained it was a time when the people of Israel lived in shame, enduring the Babylonian exile for 70 years. In verse 3, God promised “To give them beauty for ashes, the oil of joy for mourning, the garment of praise for the spirit of heaviness”

During that humbling period for the people of God, they would cover their faces with ashes that symbolised grief, loss and humiliation. The word “beauty” in verse 3 means a crown, symbolising victory. God promised that there would be an exchange when the children of Israel released their past to Him. He would be the Counsellor who would come and comfort them, the Advocate who would defend and fight for them, and the Intercessor who prayed for them. 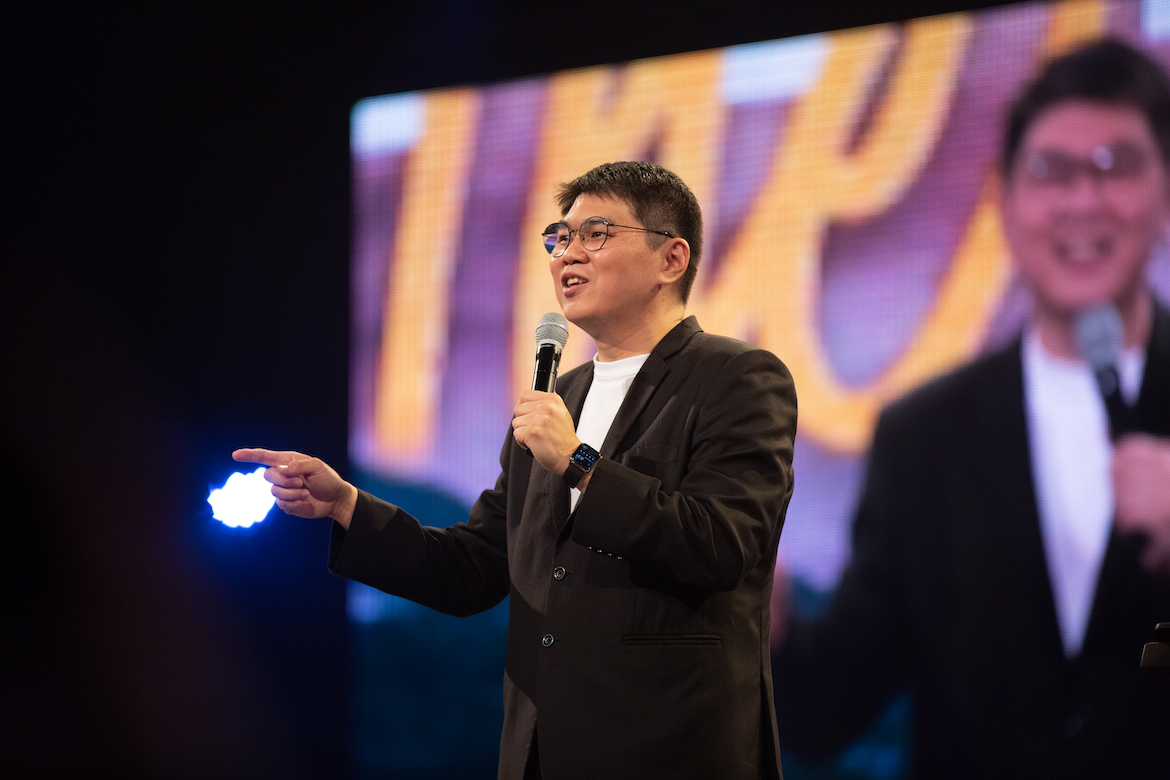 Pastor Junxian illustrated this role of the Holy Spirit with a story. A 6-year-old boy had lost a tiny Lego sword during Sunday school, and was so distraught he begged his mother to buy him a new one. The single mother was overwhelmed by her own struggles, and told her son to ask the Holy Spirit where the sword was.

The boy took his mother’s instructions seriously and went and prayed. He came back and told her that the Holy Spirit said that he would find the sword at church the following Sunday. When Sunday came, he searched the room in church, but found nothing. Disappointed, the boy and his mother were about to leave when a teacher called out to the boy and returned him the Lego sword she had found.

2. Rebuild our present in God

Reading Isaiah 61:3, Pastor Junxian noted that Isaiah’s focus was not on building the city, but rather, on rebuilding the people of the city, so that they would return to their way of life in God.

“Isaiah was once again telling and repeating to the people of God that this is the way,” the pastor said, making a reference to the Mandalorian TV series. “Return to worship, return to calling His name, return to the Word of God, return to the House of God.”

Pastor Junxian urged the church to return back to spiritual normalcy, and not to allow the pandemic years to destroy their way of life in God. Referencing the sermon from Bobby Chaw, CHC’s executive pastor, on Koinonia, the fellowship of the Spirit, Pastor Junxian encouraged the congregation to return to fellowship with one another.

“Come back to the house of God, because this is the way,” he urged before reading Isaiah 61:6. “Isaiah reminds the people again, we are a priest unto one another.” He added that in 1 Peter 4:10-11, the apostle wrote to the church that “As each one has received a gift, minister it to one another, as good stewards of the manifold grace of God… If anyone ministers, let him do it as with the ability which God supplies, that in all things God may be glorified.”

“When you and I serve God with the ability that God gives us, at the end of the day God gets the glory. So don’t keep your God gifts to yourself,” Pastor Junxian urged, as he encouraged the church to start serving in ministry again.

3. Rejoice in the timing of God

Isaiah 61:7 reads, “Instead of your shame you shall have double honour, and instead of confusion they shall rejoice in their portion.”

The word confusion here is better translated as humiliation. Pastor Junxian acknowledged that it seems almost unthinkable to rejoice in a time of humiliation. Not only is it difficult, but it is almost cruel to ask one in shame to shout for joy. Yet God wants to turn that humiliation into honour and joy for the future.

Reading Hebrews 13:15, Pastor Junxian pointed out that sacrifice and praise are really opposite because praise is often a response to an action or gift. “But if we praise God only when something good happens, then our praise is transactional,” the pastor noted.

However, if one chooses to praise God in times of difficulties, it is a sacrifice. “We thank God for the spiritual breakthroughs, but don’t just look for them in the here and now. Sometimes in waiting for that breakthrough, there is an engagement process that God has with us. And He begins to deal with us in the different areas of our lives,” he taught. Pastor Junxian related the story of his members Lee Hee Wei and his wife Eve who received a word 14 years ago to open a cafe. But things went south a few years after they launched their business: their partner left them in debt, and Eve suffered a miscarriage. But they chose to remain in God’s process: when the church started its Barista Ministry, husband and wife immediately signed up because they wanted to serve God with their talent. They continued to surrender to God and trusted in His faithfulness.

Soon, a breakthrough came, and God opened a door for them to start a small café. Today, God has blessed the couple: not only did they recover financially, they also expanded their café and are planning a second outlet. Just last month, after five tries, Hee Wei won the Singapore Barista Championship competition and will be representing Singapore competing in the World Barista Championship in Melbourne, Australia.

Reading 1 Peter 4:12-13 (MSG), Pastor Junxian urged the church not to “jump to conclusion that God isn’t on the job. In fact, glory is just around the corner.” Instead, he encouraged the congregation to trust in the process that God sets and know that God is fully committed to His people.

In closing, Pastor Junxian exhorted the church to not look at their immediate circumstance, but to notice and focus on what God has intended for them. “God always reveals His plan in parts, but He always reveals His heart in full,” he said.

Christians, Assemble For The Glory Of God: Lin...

Lee Hee Wei: A Champion Made In God’s...