The week leading up to Christmas was extra special for the 315 CHC members who were water baptised. Some of them even got their family members involved, making it a family affair. In water baptism, Christians declare that they are a new creation in Christ, and they belong in the kingdom of heaven. It is therefore one of the most significant events in a Christian’s life. Jesus himself was baptised by John the Baptist before He began His ministry.

Over the weekend of Dec 17 to 19, 315 City Harvest Church members made this important decision. Each was water baptised at Suntec Singapore, in one of 10 sessions conducted by their senior pastor, Kong Hee. The youngest member to be baptised was just 5, while the oldest was 80.

“As you go down into the water later, imagine in your mind that you’re laying behind all your sins, your struggles, greed, anger, lust and unforgiveness,” said Kelvin Tan, a pastoral supervisor as he encouraged the water baptism candidates. “And as you come up, be free to clap or shout, be victorious because you are a new creation.”

Daryl Lim, 14, had received salvation not long ago and immediately signed up for water baptism. “I feel very blessed to be able to be baptised today, and I am very proud of myself for doing this,” he shares.

Christabel Tiang, 15, shared candidly, “To be honest, as I stepped into the water, I was a little scared. But as I emerged out of the water, I felt like a new person, refreshed and born again. It is indeed an experience that I will remember forever.” During one baptism session, CHC pastor Lin Junxian assisted in the baptism of his younger daughter. “My wife Dawn and I are so happy that Debbie made the personal decision to be water baptised this year! This spiritual milestone signifies the inner work that God has done in her life and an outward declaration of her faith and love for Jesus!  It was a proud-dad moment for me to baptise her together with Pastor Kong!” he said.

Alison Yap, CityWorship’s vocal supervisor, and William Ng, CHC’s director of audio and lighting also saw two of their four children getting water baptised. “We are so happy when Elliot (7) and Edelle (8) told us they wanted to be baptised this year. We have always prayed and hoped that our children will experience God themselves and have their own encounters. We believe this is the beginning of their exciting adventure with Jesus!” said Alison.

For some, water baptism was a family affair. Ryan Hoa, 20, has been a member of CHC since he was a child. His parents Mike and Julie are both hearing-impaired, and they would bring him and his brother Ray to the children’s church, but not attend the church’s main service. The Hoa family chose to get baptised together this year

This year, Ryan decided to get baptised. “When I first received Christ, I wasn’t really aware of why it was so important to get baptised,” he says. Over the years, watching his cell group members getting water baptised one by one helped him understand its significance. “I felt that I should also take that step to draw closer to God by getting baptised.”

When he told his mother about his decision, her immediate response was to have the whole family do it together. “She wanted it to be a family thing—to proclaim our faith together as a family. My father and brother agreed to be baptised too after I explained to them why I wanted to do it. After the water baptism class, they also understood the meaning of baptism and the importance of it.”

The Lim siblings Lenny, 17, Linus 12, Lara, 10 and Luther, 7 decided to get water baptised together. Their grandparent who had told their parents not to force the children to become Christians was present to witness the important moment. It was a significant event for the family.

“I feel ready to do it this year. I did not want to do it earlier just because other people were getting baptised,” said Lenny. “To me, water baptism is a step of faith and a sign that I am ready to dedicate my life wholeheartedly to God and to do His will in my life.” 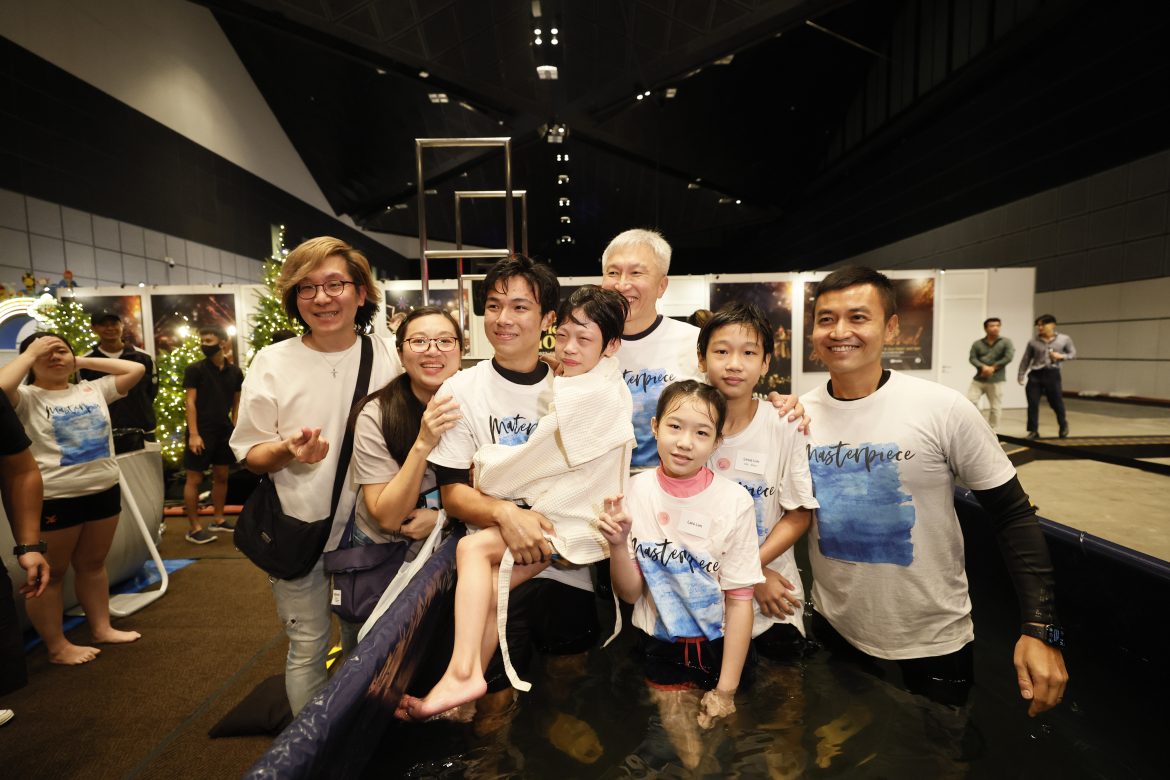 Their parents, Frankie and Swee Pei explained that they had been waiting for Lenny to tell them that he wanted to get baptised. Since they felt that all four of their children are ready, based on their understanding of their faith, they decided to have them do it together.

“Luther is a child with special needs. Ever since he joined the family, we have had no choice but to look out for him because, in the eyes of the world, he is our weakest link. But the truth is that he paved the way for us to see life with a different lens in a positive way,” the parents shared.

“People may frown at the ‘sacrifices’ we made our other children do for Luther’s sake, but we don’t believe they see it that way. Since Luther is a child with special needs and the youngest, we wanted him to get water baptised with his siblings in case he became anxious about dipping in the water, which he did.”

Lenny echoed the words of his parents, “I find it meaningful to do it together with my siblings. To me, it signifies a sense of unity in the family.”