Christians, Assemble For The Glory Of God: Lin Junxian

In last weekend’s message, Pastor Lin Junxian taught the church the importance of assembling as the people of God, to worship His glory. Matthew 16:18 reads, “And I also say to you that you are Peter, and on this rock, I will build My church, and the gates of Hades shall not prevail against it.” The word “church” in Greek is ekklesia, which means “called-out ones coming together”.

City Harvest Church started out as a gathering known as Ekklesia Ministry. “Ekklesia is God’s people, called out from the world, to form an assembly or a congregation,” explained Pastor Lin Junxian as he began his sermon on the weekend of 22 and 23 Oct.

As the world enters the endemic phase of Covid, and life returns to normalcy, CHC has also entered into a season of rebuilding. In the past year, the church has held early and late-night prayer meetings where members gathered online to seek God. Previously put on hold during the pandemic, now Emerge services, Church Without Walls initiatives and the Marketplace dinner are back in full swing. In addition, CHC held its inaugural CFAM conference and Young Adult service this year. Next year, the School of Theology, which went on a two-year hiatus has begun enrolment for SOT 2023, ready to welcome students from all around the world to Singapore.

When Jesus predicted his death in Matthew 16, He told His disciples that He would continue to build His church. Pastor Junxian noted, “And 2,000 years later, Jesus is still building His church.”

“As we end 2022, I believe God is calling out to us once again, to assemble together as a church for His glory,” the pastor said, likening it to the way the heroes in Avengers: Endgame responded when Captain America commanded, “Avengers, assemble!”

Psalm 122:1 is a well-known verse that reads, “I was glad when they said to me, ‘Let us go into the house of the Lord.’” Pastor Junxian pointed out that the verse starts with an individual speaking, referring to “they” who call the individual to go to the Lord’s house.

In Exodus, God called Moses to lead the Israelites out of Egypt. God was not satisfied with simply assembling His people to deliver them out of slavery and giving them the Ten Commandments—He wanted to be near them.

He spoke to Moses to build the tabernacle. In Greek, the word “tabernacle” is mishkan, which means the dwelling place of God. It is also known by other names like sanctuary (Exo 25:8), a place of worship. It is also called The Tent of Testimony (Num 9:15), where the Ark of Covenant containing the Ten Commandments resided. It is also the Tent of Meeting (Ex 40:34-35) where the Israelites congregated to fellowship. Lastly, it’s known as the House of the Lord (Exo 34:26), where people came to meet with God. “We think of our own house as a place of refuge, a roof over our head, where there is protection and family. A tabernacle is a place of refuge and communion with God,” Pastor Junxian elaborated.

There are three times the Bible related the glory of God with the people of God.

1. The tabernacle in the time of the wilderness

When the Israelites were in the wilderness, the tabernacle was positioned right in the centre of the camp. The 12 tribes arranged themselves around it, forming the shape of a cross. Their lives centred around the tabernacle and the worship of God.

They were led by a pillar of cloud by day and a pillar of fire by night, signifying that God dwelt among them. Each time the glory of God moved, the children of Israel would pack up the tabernacle and the tents and follow the cloud.  Once the glory of God settled on a new place, they pitched their tents again.

“What started as a personal encounter for Moses led to a corporate encounter for the children of Israel,” Pastor Junxian noted. “From this, we know that God loves to gather among His people, to show His glory.”

2. The temple in Jerusalem

After the Israelites came out of Egypt, they continued to gather around the tabernacle for the next 400 years. King David eventually decided to build God a permanent house and his son King Solomon built the temple in Jerusalem.

In 1 King 6:11-14, God expressed that He would live among the Israelites. “Once again we see God’s desire to be in the midst of His people,” Pastor Junxian said. When the people came together for the first time, God’s glory filled the temple (2 Chron 5:12). He loves to gather His people to show His glory.

3. Jesus in the New Testament

In the 400 years between the end of the Old and the start of the New Testament marked a time where the people had backslidden and had no experience of the glory of God. However, it came to Israel in a way it did not expect.

In John 1:1, 14, John wrote that “the Word became flesh and dwelt among us”. The word “dwell” in Greek is “skenoo” which means tabernacle. “Jesus came to ‘tabernacle’ with His people,” the pastor taught. “To dwell with them, so that His glory could be near them.”

The people were able to encounter the full glory of God—His presence, His power and His moral goodness—when they encountered Jesus. Jesus told His people that He would send them the Holy Spirit, who is the Spirit of Glory, and that He would abide in God’s people forever (Jn 14:16).

THE LIVING STONES OF GOD

However, the pastor emphasised that having God dwell in them does not give Christians a reason to not go to church. Jesus, who was full of the Holy Spirit, went to the House of God as a spiritual discipline (Lk 4:16-17). “If it’s important for Jesus, it is important for us!” Pastor Junxian declared. In Eph 2:19-22, Paul reminded the Ephesian Christians that they fit together corporately to become the holy temple of God. 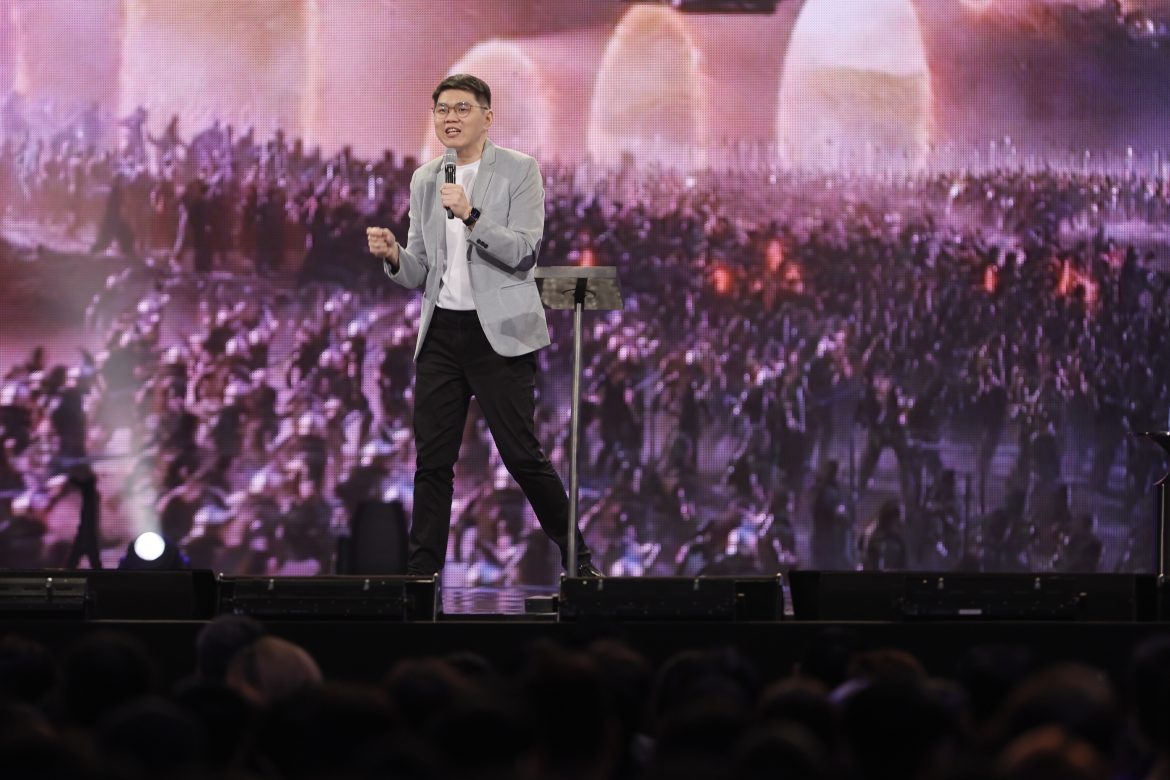 The pastor offered this analogy: when his daughters were young, they loved to play with Lego. “They would not ask for one brick—they would ask to buy the largest set with the largest number of bricks!” he said. Every brick is made to sit with others to form a structure. “Only when fitted together will it fulfil the purpose of what it is designed to be. Likewise, as believers, when we gather together, we become God’s Lego bricks, the living stones, fitted together to become the holy temple unto the Lord.”

In Acts 2:1-14, the Holy Spirit filled the whole house when the disciples gathered, and they were transformed. Their faith and boldness to preach the gospel birthed forth the New Testament church. The church then gathered daily for the Word and for fellowship—they lived their lives around the glory of God. They experienced healings, signs and wonders and the church grew exponentially.

In April 1906, the Azusa Street revival happened. Back then there was no widespread move of the Holy Spirit, but when William Seymour gathered a few believers to wait upon God, the glory of God came. The Holy Spirit filled them, and they began to speak in new tongues.

Soon, word began to spread, and thousands of people came to worship God and witness His glory. People walking down the street would be convicted and repent of their sins. Those with sicknesses came and were healed.

In the 70s, a woman in her 90s, Mattie Cummings gave testimony of the things she saw and experienced during the Azusa Street Revival, including how God healed her deafness. “One encounter with God changed her entire life,” the pastor said.

Today, there are more than 600 hundred million Pentecostal Christians all around the world, thanks to the revival that began on Azusa Street.

Pastor Junxian listed three things a Christian must do to experience more of the glory of God. Firstly, he must desire God’s glory. Secondly, he must hunger for His glory and lastly, he must seek His glory.

He recalled how he came to CHC in 1992 and encountered the glory of God, and his life was changed. Captivated by the glory of God, Pastor Junxian told God that he wanted be like the Israelites and centre his life around his worship of God.

“A few months ago, I met with a troubled youth who came up to hall 605,” Pastor Junxian shared. The youth had been facing many struggles in his life and was looking for a pastor to pray for him. Pastor Junxian was just leaving the church when a member directed this youth to him. After ministering and praying for him for an hour, Pastor Junxian and the youth parted ways. During a recent weekend, the same youth came up to the pastor, and this time, his countenance had completely changed—he told Pastor Junxian how God had been turning his life around.

Pastor Junxian encouraged the church members to keep coming back to the house of God. By gathering every weekend at CHC, they filled the place with the glory of God, turning into a place of faith and hope for those who need an encounter with Jesus.

He ended the service by encouraging the church to assemble once again in person, to worship God in His glory.