A “Monster” Hit: How God Opened Doors For A New Filmmaker

What would you do if your son was bullied in school? Filmmaker Eric Wong decided to make a short film to start a conversation. Monster won the Best Drama Short Film Award at the Chandler International Film Festival in Arizona this past January. 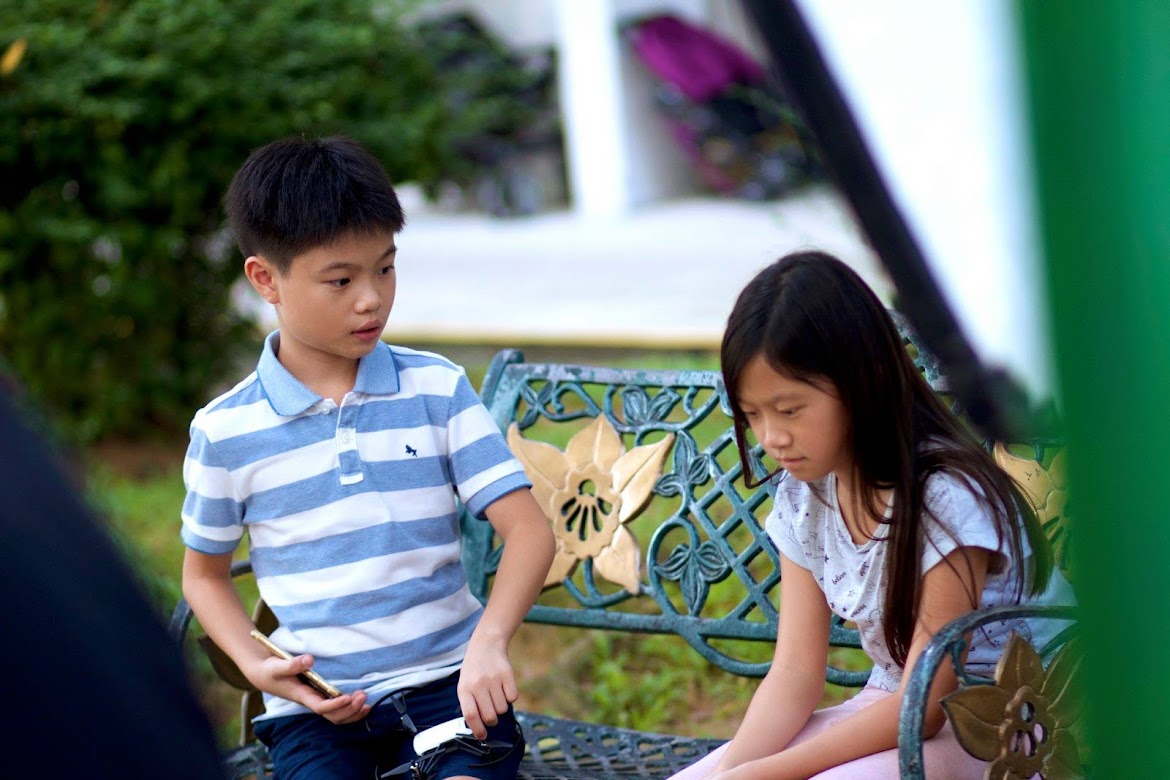 A scene from the award-winning film, Monster

“It didn’t start off as a big idea. My main reason for making Monster was to tell the story of how kids like my son and his cousin were bullied in school,” explains Eric Wong, founder of United Records Productions, which produces films, music albums, and soundtracks.

When his son was in primary four, Eric noticed a change in his demeanor. After some coaxing, he told his father what happened. Eric also spoke to his son’s cousin who had also been the victim of bullying.

“Primary school kids find it hard to talk about being bullied, but when they watch something like this film, it starts a conversation,” he explains. “Kids may not obey what their parents or teachers tell them, but if they watch a film that comes from a third party, it may make sense to them and inspire them to take action. This is an avenue for them to think.”

Working on a lean budget, the film was mostly done in house. It was shot partly in a local primary school and Eric even scored the film music himself. “When we were looking to cast the mother, we thought [actress] Amy Cheng would be perfect. We decided to ask her; she agreed immediately because the topic resonated strongly with her,” he revealed. The cast and crew of Monster

“One reason I wanted to do this film was so that we could play it in schools and teach kids how to recognize bullying,” says Eric. “It’s to make them consider, ‘What would you do if you were the victim? What if you were first bullied and then turned into a bully yourself?’

“I’m not there to make judgment of what’s what,” he adds. “This film lets you draw your own conclusions.” Monster is the first in a trilogy of short films with social themes; the next two are about teen suicide and domestic violence.

MONSTER WINS
While it has played to just a few audiences in a private screening in Singapore, Monster wowed judges at the Chandler Film Festival in Arizona in January 2020, walking away with top honors in the Best Drama Short Film category.

Eric had entered Monster into a handful of film festival competitions. “When we received news we were shortlisted, we took a calculated risk and made the decision to go to the US,” he says, adding that it was his wife Careen’s first time to America. “There were nine films competing in that category, so we sat and watched the other eight films. Most of the films were from the US, some from Portugal and the UK. Monster was the only Asian entry. Some of the production values were really high, so we didn’t think we would win. If nominated, tao chio (consider yourself lucky) already!”

Eric relates how unprepared he and Careen were for the moment. “We were very tired that night of the awards. That morning, we did touristy things and walked a lot. During the awards ceremony, I had my phone camera out getting ready to capture the screen if they flashed Monster in the nomination list, but that Powerpoint slide never came on. That was when we heard ‘And the winner is… Monster!’” 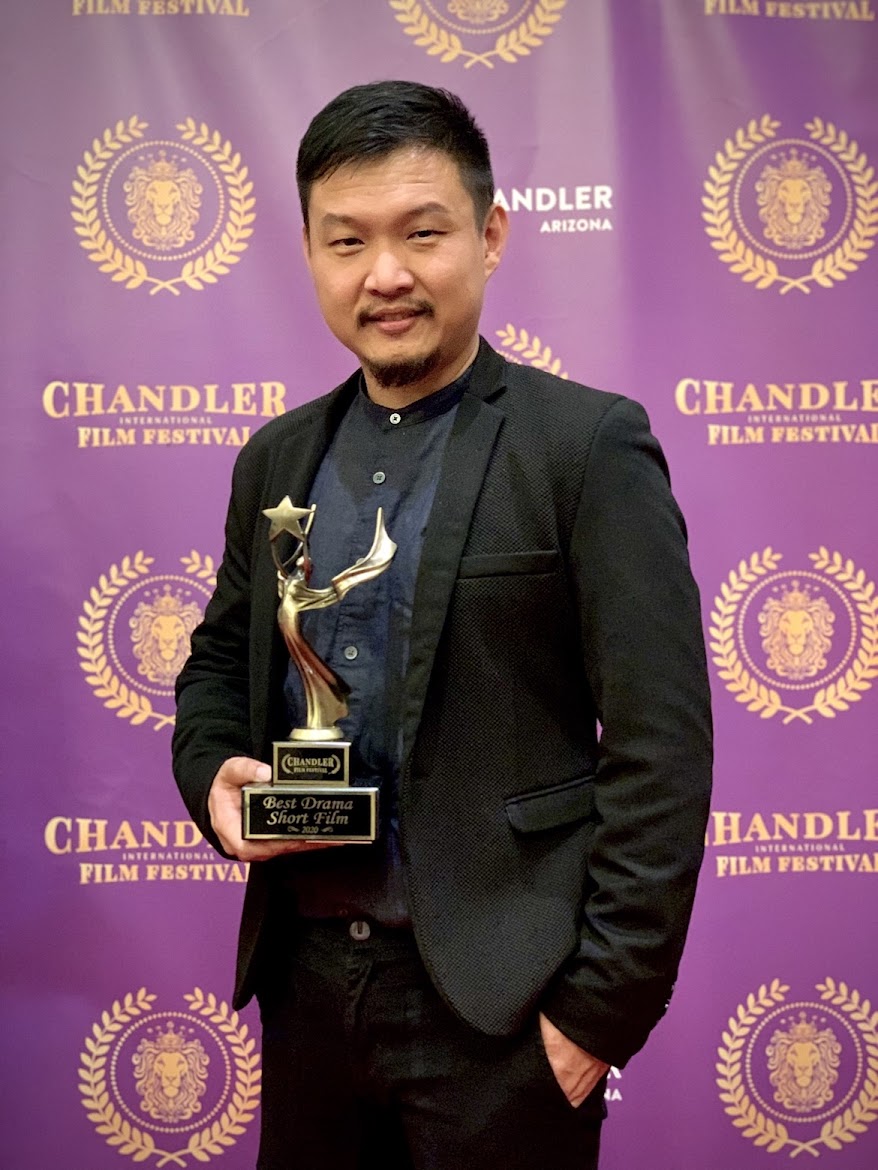 Eric says the rest is a blur—he can’t remember much of his acceptance speech, apart from thanking the city of Chandler. “It’s a lesser known city in Arizona, but we really liked it for its serenity and it’s ranked number four in the US in terms of safety.”

FROM CHURCH WORKER TO FILMMAKER
Eric came to City Harvest Church in 1998, when he was a national serviceman. He enrolled in CHC’s School of Theology in 2000, and joined the church staff as a pastoral worker for five years. In 2009, he ventured out into the marketplace, joining a property company, Villa Investments.

A musician all his life—and a school band instructor for many years—Eric decided to take the plunge with Careen and start his own company: United Music, which provided music education. At the same time, they started a second company, United Records, which produced music by new talents like Scarlet Avenue, and handled music production of film soundtracks, among other types of work.

“In 2014, we started making music videos, because of our artists,” Eric explains. Cost was a factor, so Eric and Careen decided to do it themselves. “We’re a small company, so we learned how to do it ourselves. Learning is a very important culture in our company.”

Careen today is a sought after film editor and colorist. “It happened because she couldn’t stand my editing,” Eric laughs. “She’s a bit of a computer geek, so she went for courses and learned how to do it: editing, color grading. She’s a great testimony for the effectiveness of the SkillsFuture concept!” Careen and Eric in Arizona, January 2020

As they progressed, more doors opened. “It helped that we have many producer and director friends in film,” says Eric. “Because of that we did a lot of audio for films.”

Things took a turn for the busier when one Father’s Day at CHC, Singaporean filmmaker Jack Neo watched a music video that Eric and Careen had produced. Jack, a member of the Chinese service, had wanted to start a video production ministry in the church. He quickly roped Eric into his movie productions, and of course, the video production ministry, which recently produced “八点钟的约定”, an evangelistic movie that drew a full crowd at the Chinese service last November.

“Jack is a great storyteller, and he is one of the most hardworking people in the industry,” Eric says. “From him, I learned to work hard. Jack Neo days are 15-hour days: he can finish a full day of acting and directing and go and oversee the editing after that. He’s so passionate about his work.”

Jack invited Eric onto the set of Ah Boys To Men 4, and halfway through, told Eric, “You take over, I need to go for a meeting.” Faced with literally a battalion of actors, tanks and other military equipment, Eric had no choice but to dive right in and direct scenes to the best of his ability. “When Jack came back and reviewed the footage, they basically had to reshoot half of the shots,” he smiles wrily. But such an experience is what forms teachable moments, and Eric is a fast learner. He has since assisted Jack on more film projects, and gathered enough expertise and courage to begin full-length feature films.

Eric is working on several such projects this year. The first is a movie based on Pastor Johnny Seragih’s outreach, Bukit Doa Drug Re-Habilitation Center. Pastor Johnny is the senior pastor of Indonesia Harvest Church, an affiliate of CHC. Eric connected with him 10 years ago when he went to preach at Pastor Johnny’s church.

The plot, based on a true story, chronicles how a group of boys from the village of Karo travel to the city of Medan to study, and how their lives and brotherhood are forever changed by drugs.

“We were in Indonesia last December to recce film locations, including Mount Sinabong, which is a live volcano,” describes Eric. “So many serendipitous things happened while we were there, for example, the Regent of Karoland that Pastor Johnny had been waiting to meet suddenly was available out of his busy schedule, and we all went to meet with him.” 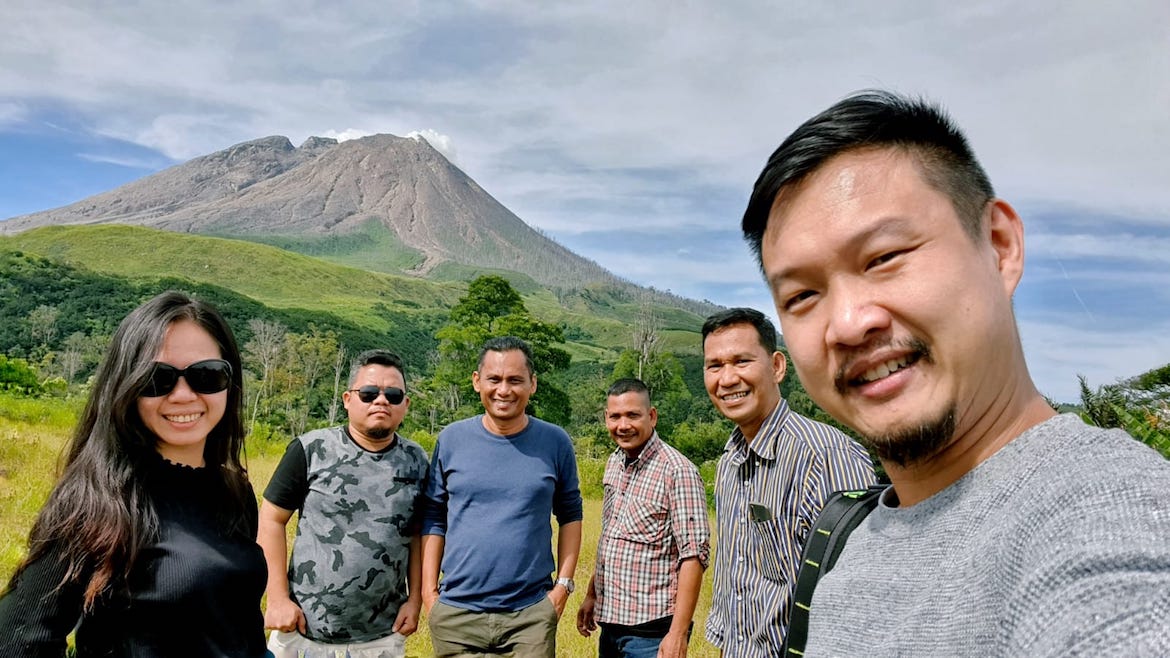 The Wongs with Pastor Johnny Seragih (in blue) and his team

Another project is a Filipino film with Singaporean director Kelvin Sng, which has the working title The Last Confession. “It is a psychological suspense thriller,” says Eric, who assumes the producer role, “and we will be working with some well-known actors in the Philippines.” The introduction to these actors came by way of Pastor Chabby Palmares of World Harvest Church, also a CHC affiliate church.

THE IMPACT OF THE CULTURAL MANDATE
“Retrospectively, I can now understand every door that God opened in our lives,” says Eric. “I’ve learned that, as we walk through life, we have to keep our heart open for God’s direction.”

He points out that for those who were teenagers or young adults when CHC entered its Cultural Mandate years (2001-2009), the mandate has become a way of life.

“Pastor Kong taught it, Dr [AR] Bernard taught it, how we ought to be relevant to society. That takes a lot of guts, to want to stand up and do something that you know will face opposition,” he points out.

Eric considers that he has been “actively doing the Cultural Mandate” since 2011 when United Records began, but it hasn’t been an easy journey. “When we brought artists like Scarlet Avenue out for performances, we felt the pressure the world has,” he says candidly. “Some artists behave in a certain way to look cool. We tell our artists that we remain straight and narrow, we do things in an honest way. Sometimes, you suffer losses—God will always make it up to you, because you honor Him.”

“On this journey, we’ve seen so many miracles, so many doors that have opened—it can only be God,” Eric says, naming the Chandler win as just one of many such miracles. 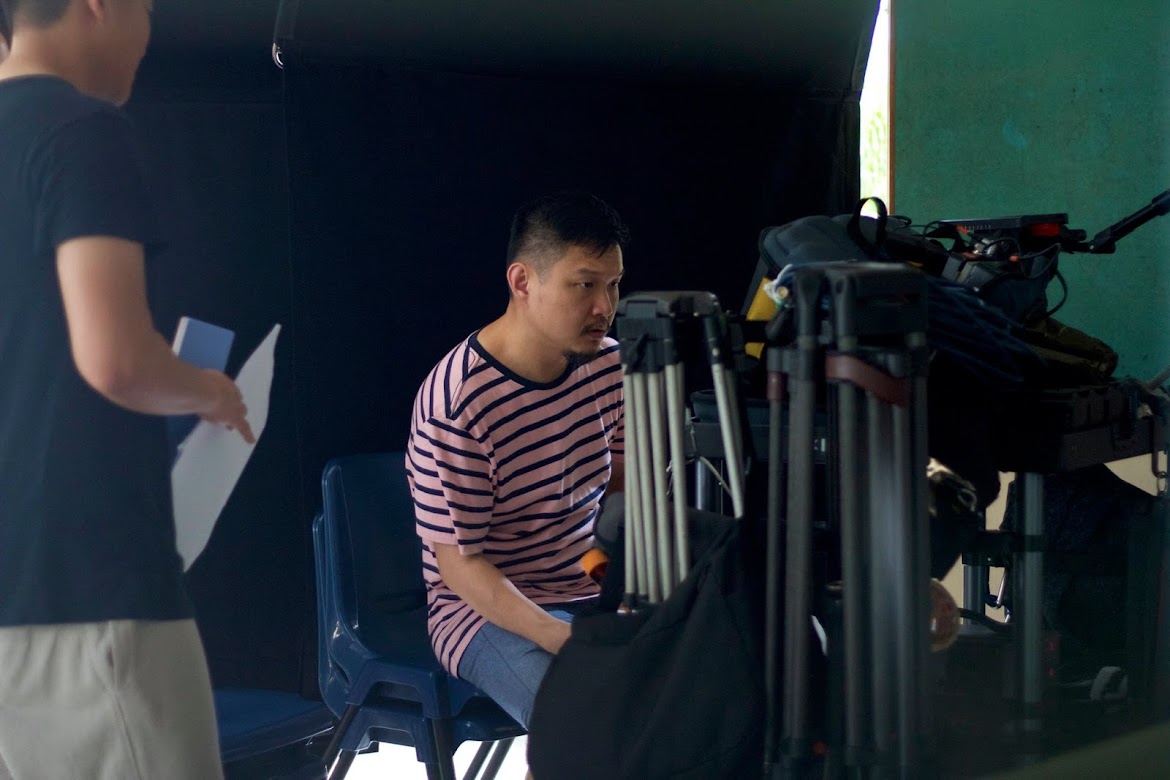 Eric in director mode during the filming of Monster

“We feel very blessed to be on this journey,” he continues. “The fact that we are so new in the industry, yet God has propelled us to movie level projects, something that can take decades. His miracles always happen for us through open doors, not through our own smarts or strategies. If He didn’t open the door, we wouldn’t have done all that we have done. And this happens all the time.”

It is also a blessing that Eric and Careen work together, because “when an opportunity presents itself, we would pray and check back with each other. Alone, I could be blind, but when we have a prayer partner there is safety. We ask ourselves, ‘Is this what God wants us to do?’ We pray, ‘God, we believe this is of You. If You disagree, please say so!’ If it’s not of God, it will fizzle away.”

One prayer Eric and Careen always pray is that everywhere their feet tread, God will give it to them. “That’s why we physically flew to America,” he explains. “Something happens when you walk the ground. Your heart will feel connected. I pray our influence can grow for the glory of God.

“If God has given you a dream, don’t just let it be a dream—step into that arena.”

Jack Of All Trades For An Audience Of...

What It Means To Be Made In The...

“God Wants Me To Be His Mouthpiece”: Belinda...