What It Means To Be Made In The Image Of God: Dr AR Bernard

A person’s values affect their worldview; what then should be the values that shape a Christian’s worldview? Man is created in the image of God, but what does that actually mean? Dr AR Bernard unpacked all these in two powerful messages last weekend. 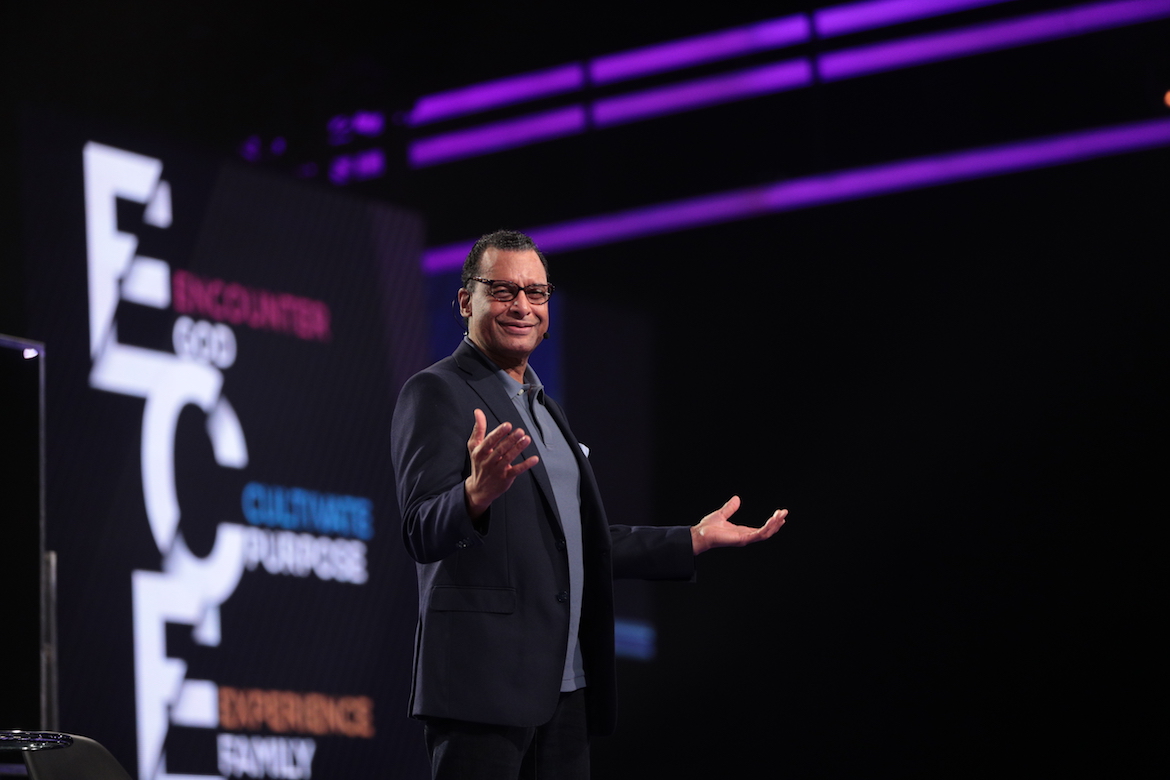 Over the weekend of May 11 and 12, City Harvest Church welcomed back Dr AR Bernard, senior pastor of Christian Cultural Center in Brooklyn, New York. 2019 marks 20 years of friendship between Dr Bernard and CHC.

Dr Bernard preached a series of powerful messages—starting with two marketplace meetings on Friday—that centred on social ethics: how Christians are to live in and engage society. On the weekend, he delved into the values that should shape the worldview of Christians, and what it means to be made in the image of God.

WHAT INFORMS YOUR WORLDVIEW?
At the Saturday service, Dr Bernard began his message, titled “Where Are You?” by explaining how a person’s core values guide his thinking and determines his worldview. He taught that values are the set of principles that determine how people navigate through life. Values are important because they influence an individual’s thinking, and the quality of a person’s thinking will affect his quality of life.

Genesis 3 records the fall of Adam and the human race. In verse 9, God asked Adam, “Where are you?” This was not a geographical question, the pastor explained, adding, “God was asking Adam, ‘What is your new worldview?’”

In Genesis 3:11, God asked Adam, “Who told you that you were naked?” God was pointing out that the devil had said something to Adam that changed his perspective of himself, God and the world. The devil’s words had informed Adam’s thoughts and actions, and as a result, made him feel ashamed of his nakedness.

Following this example, Dr Bernard posed a thought-provoking question to the congregation: “What is informing our self-esteem, self-worth and vision of life, the world and the future?” He went on to explain that whatever informs us is going to shape who we are as individuals, our beliefs and how we see ourselves.

The pastor also raised four important questions that people need to ask themselves continuously throughout life: “Where are you in life?” “Where do you want to be in life?” “Why do you want to be there?” “What do you have to do to get there?” He explained that people need to ask these questions constantly—once a year at least—so that they can ensure that they are moving in the right direction in life, and if not, they can make corrections.

“God has called us to a life of clarity, purpose, intentionality and realism,” Dr Bernard declared, elaborating on the four principles that should influence an individual’s thinking.

Clarity: Dr Bernard defined clarity as “a life that is free from ambiguity”. In other words, clarity means having clearly defined needs, wants, desires, goals and objectives.

“It is easier for people to cooperate with you when you give specific instructions,” Dr Bernard said. “In the same way, it is difficult for life to be co-operative if you’re not specific.”

Purpose: Purpose, the reason for existence, is dynamic in nature. An individual’s overall purpose will remain consistent throughout their lives but how that purpose is being applied will change continuously.

Dr Bernard taught that to identify his purpose, one has to first identify their talent. “Purpose is not something you decide, it’s something you discover,” he pointed out. “God has already decided your purpose and He has given you gifts and talents to fulfil that purpose.”

The pastor also stressed that a person’s purpose is not just for their own fulfillment; it is also for the benefit of others.

Intentionality: Dr Bernard explained intentionality as “designing our lives around our purpose”. It means being serious and committed in our relationships, finances, work, time and experiences.

Realism: This is “accepting the facts of life”. Dr Bernard preached to the congregation that Christians must accept as part of their theology the reality of suffering, disappointment, conflict and tension. Pointing out what Jesus said in John 16:33, he explained that problems exist in life so that an individual’s faith can be exercised.

“If there were no problems, there would be no need for faith,” he said. “Faith gives substance to God’s power in response to our problems.”

In closing, Dr Bernard asserted, “God loves us, He created us for a purpose and He believes in us…that must be the thing that informs our worldview.”

CREATED IN THE IMAGE OF GOD

On Sunday, Dr Bernard’s message “The Image Of God” revolved around the relationship between human dignity and the image of God. Dignity is the intrinsic value of an individual, and it is a foundational principle of the Christian ethic because it determines the way Christians interact with others in society. 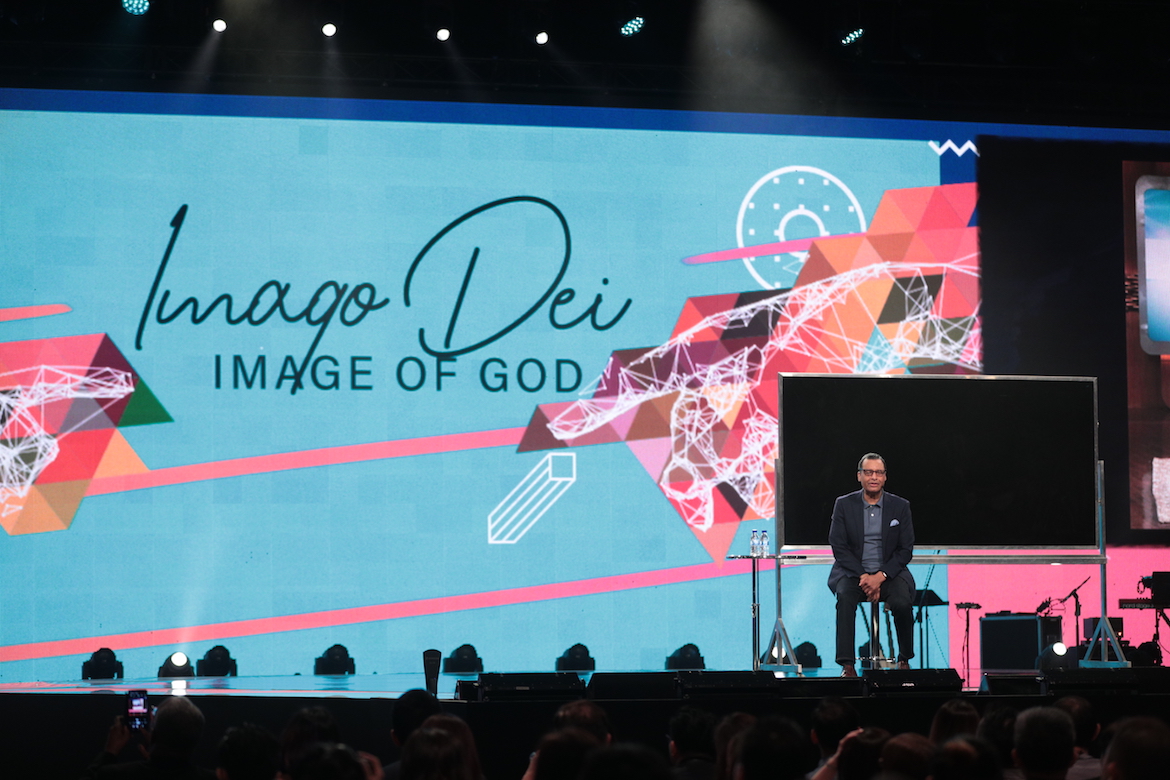 In Christian theology, every human being is valuable and worthy of respect because everyone has been created in God’s image. Jeremiah 1:5 shows how valuable God perceives man, his creation, to be: “Before I formed you in the womb I knew you, before you were born I set you apart; I appointed you as a prophet to the nations.”

He went on to explain that being created in the image of God also means more than bearing certain attributes that God has. He listed some of these attributes, which include reason, creativity, speech, self-awareness, self-determination, self-transcendence, self-reflection, morality and affections.

Rather, the image of God can be summed up in one word: status. “The image of God is a specific status or rank given by God to every human being at the moment of conception,” Dr Bernard said. “It is what sets us apart from other living creatures on Earth”.

This status is independent of an individual’s background, and it is the basis of the dignity that every human being is entitled to. As such, everyone has the responsibility of respecting the value of other individuals—value that is created because of our God-given status.

Acknowledging that in the world now, there are societies that debate the value of human life, Dr Bernard noted that if a person, such as a slave, is not considered human, that gives people the latitude to treat that person inhumanely.

Jesus addressed the idea of being made in the image of God in Matthew 22:21—the Pharisees had tried to trick him with tax money, and Jesus had asked them whose image appeared on the denarius. When they replied “Caesar’s”, Jesus told them, “Render therefore to Caesar the things that are Caesar’s, and to God the things that are God’s.” Caesar’s image was stamped on the denarius; God’s image is stamped on every human being.

“Our dignity and worth begins with the image of God,” Dr Bernard emphasized. “The principle of human dignity must influence our laws, our policies, our society and structure and how we interact with others. How we build on this image depends on ourselves. It should be influenced by the status given to every human being.”

You can watch or listen to Dr AR Bernard’s sermons from 10-12 May 2019 via The CHC App (available on iTunes and Google Play).