Married? Here’s How Having Marriage Mentors Can Help You

There are schools for everything from physics to baking. But when it comes to the art and science of marriage, there’s hardly any help. That’s why in City Harvest Church, CityFamiles is training Marriage Mentors to journey with married couples. Photo by Dwi from Pexels

Imagine this: you finally meet the person of your dreams and you both soak in blissfulness for a year or two. Next thing you know, you are applying for a BTO and planning a wedding. Things get a little uncomfortable when parents on both ends start to intervene in the wedding planning. As the stress of getting married grows, the arguments begin. You tell yourself, “It’s okay, it will get better after the wedding.”

Only, it doesn’t. Once the honeymoon phase of the marriage is over, you start to wonder, “What have I got myself into?!” “To have and to hold, till death do us part” begins to sound daunting instead of romantic.

How does a couple navigate their way to “happily ever after”? How can a marriage thrive instead of simply survive?

These are questions weighing on the minds of many married couples—even those in healthy ones. Thus, the topic of marriage is a chief focus of CityFamilies, CHC’s ministry to supports family life in the church. For many years, CF Marriage has been supporting marriages through its pre-wedding workshop, Happily Ever After, as well as marriage counselling. “There’s a gap right in the middle because we also want to help marriages that are not exactly in distress,” explains Jeremy Choy, the pastor who oversees CF. “We want to bring life and renewal to marriages that are three to five years old, and things might have become a little bit mundane because of children and all kind of stuff the couple’s been busy with.”

He adds, “One big part of this marriage initiative is to bring the spark back to the marriage.”

WHAT ARE MARRIAGE MENTORS?

To do so, CF Marriage started training Marriage Mentors. “Basically, the Marriage Mentors are a married couple who will walk with the young couple through the various stages of their marriage, whether they’re doing well, or in distress,” the pastor describes. To determine which stage a couple is in, the marriage mentors use the Prepare/Enrich assessment.

Pastor Jeremy explains that this is done through a questionnaire. “Using this we can pick up a lot of things: what they are doing well, what they can improve on, which areas they are struggling in. So, the tool gives us a good starting point of conversation, an opener to start mentoring the couple.”

Once the couple completes the questionnaire, the mentors receive a detailed analysis of the couple’s response. The test results will reveal things about the couple’s level of communication, intimacy and other things that give the mentors a starting point on how to help the couple.

Since last year, the ministry has been sending Marriage Mentors for training with Bridging Hearts, an organisation dedicated to empowering marriages. These mentors are couples who have been married for a number of years and who are leaders in the church. As a part of the training, Marriage Mentors had first to go through the Marriage Mentor experience themselves which means that they were assigned to their own mentors from Bridging Hearts. They answered more than 200 questions on the Prepare/Enrich assessment and sat with their mentors to go through their reports.

Pastor Jeremy and his wife Annie, together with a few other pastoral staffers, were the first to participate in the training. “Once we are married, it comes to a point where things and issues happen daily, and over time you learn to keep things to yourself in order not to blow up matters,” Annie says. “When I was doing the assessment with my mentors, I feel like I could actually voice my grievances in a safe manner.”

She adds, “One of the things that we learned is that men and women think differently. We know this but when we are faced with an issue, we won’t think that ‘Oh, I’m a woman, you’re a man and you may think differently.’ Instead, we just focus on the issues and many times, we misunderstand one another’s intention and actions. One of the things all of us learned at the training was that we need to learn how to question and paraphrase in order to gain the right understanding.”

The assessment also gave the couple a chance to discuss topics that are difficult to broach. “Like questions about sex, which is a couple’s private business, but it is also a major issue in marriage and so definitely something that couples need to talk about,” Annie shares.

“From the assessment, we learned which areas to work on in our lives and what our personal needs are,” says Veronica Tang, a pastor in the CF committee. She and her husband Aaron are also mentors who went through the Marriage Mentor training. Pastor Veronica Tang with her husband Aaron and their daughters

Even though they have been married for almost 16 years, Aaron and Pastor Veronica gained a lot from the Prepare/Enrich assessment. “During the training, we talked about money, and even family history because how a person grew up shapes the person and determines what he or she brings into the marriage. We also talked about our visions and how is God a part of our relationship,” Pastor Veronica details.

THINGS WE LEARNED ABOUT OUR MARRIAGE

“It’s an eye-opener for me,” says Angelina Lim, who attended the Marriage Mentor training with her husband Ben. “All these years, I’ve always wondered what the state of our marriage was, because we never have a platform to talk about things, such as how we communicate.”

Once the report is created, the Marriage Mentors go through with the couple their personality types, where their marriage is at the moment, the areas they are good at and the areas they need to improve on.

“The training also brought out some issues that we had never really spoke about in the past, things we had swept under the carpet, and we were able to talk about them in a safe space with our mentors,” continues Angelina. “Our mentors were very accepting, and they made it perfectly fine to bring up anything. They were also sharp in raising issues in a safe manner. There was no condemnation, and that very accepting environment made it easy for us to talk about whatever it was that we need to talk about.”

One thing Angelina learnt from the mentoring experience was how to communicate more effectively with Ben. “Because sometimes we have the tendency to think about something and we don’t say it, but we expect our partner to know. So, that is a very big no,” she shares. 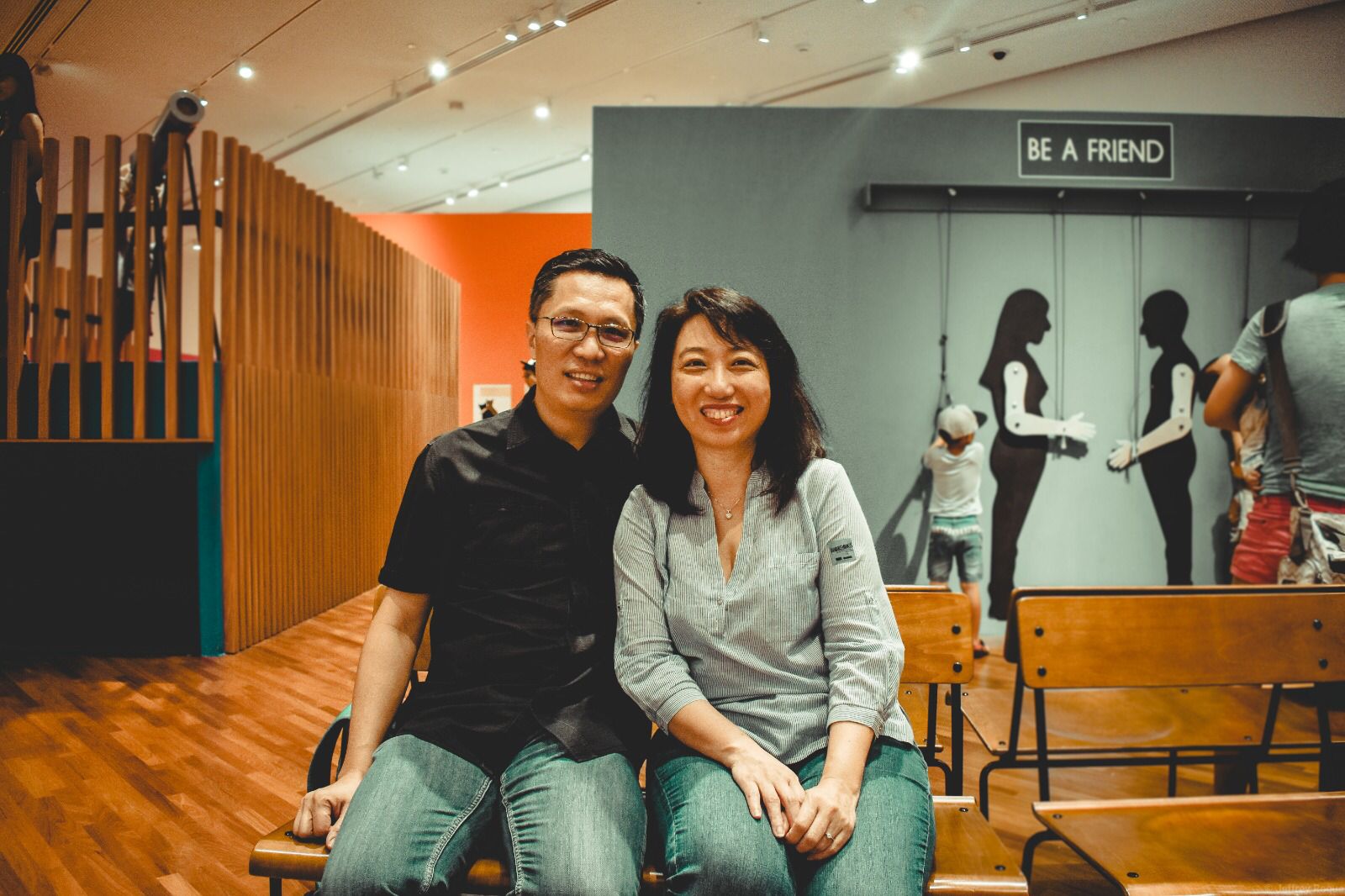 Angelina Lim and her husband Ben

While it may seem daunting to open that can of worms, she feels that it is a necessary step for the marriage to move forward. “I think the main premise behind this marriage mentoring is that you need to want to come together. You must be prepared,” she warns. “There will be things that you don’t like. It’s scary, but the unique part of this is that it reminds you of why you said yes to each other.”

Pastor Veronica agrees that the key to having a successful mentoring experience is to be open. “We went in with our hearts open and we really just want to learn from them, so that we can help others. We are co-leading a family cell group, and all of our members are married couples. To us, our own marriage must first be thriving, instead of just surviving, before we can help others,” the pastor explains.

HOW MENTORS CAN HELP A MARRIAGE

“The initial idea of having a marriage mentor may seem negative, like it’s a sign your marriage is in distress or you’re facing problems, that’s why you need a marriage mentor. It can be a negative feeling at first,” Isaiah Kuan openly admits. “But once we entered into the session and met our mentors, who were in their 60s with children much older than ours, it suddenly dawned upon me that this is so good. Even though we have been married for 18 years, it is still good to have a marriage mentor.”

Isaiah Kuan and his wife Klessis are another couple who went through the Marriage Mentor training. He explains, “To have an older couple to just be there to encourage us and tell us, good job, you’re on the right track, you’re doing well, just continue doing what you have been doing—that grace us a lot of assurance. It gave us a boost in our marriage.”

After four sessions of going through the assessment, the Marriage Mentors progress to the next part of the training which equips them with skills and strategies to help couples at different stages of their lives.

Isaiah shares, “In one session, the trainer taught us about validating the feelings of the other person. Personally, I learnt a lot from that. Not only for me to mentor other couples in future, to validate whatever things they are going through, but also in my own marriage with Klessis. Many times, it’s about me trying to find her a solution or trying to make her feel that I understand her, but sometimes it’s just as simple as validating her emotions, validating what she’s going through. That would have probably solved a lot of problems.” Isaiah Kuan and his wife Klessis

Marriages go through different stages and what a mentor does is to help a couple prepare for the next stage. “There’s before marriage, early marriage, middle marriage and older marriage. When we mentor a couple, we also prepare them for the next stage,” says Pastor Veronica.

She gave the example of a couple in the early stage of their marriage. One problem they face could be adjusting to one another. “But at that stage, we would also prepare them for the future, in middle marriage when children come along and become a big part of it, their love for each other may start wearing off. We then teach them some of the things they must do, and some biblical principles they must live by,” she elaborated.

She adds, “I think the Marriage Mentor programme is very useful. Many times, in counselling, we tackle the issue only after it happens. But in mentoring, we prepare them so that they can avoid the issue, or even if they encounter the issue, they are prepared. We want them to be able to see the problems coming and be equipped to work on them.”

To date, CF has trained 44 pairs of Marriage Mentors who will serve married couples in the church.