Emerge Roundup 2019: What Can You Do For Your Leader?

Being a leader is tough, so as members, our support for our leaders is key. At the final Emerge Service of this year, Pastor Wu Yuzhuang delivered an impactful sermon on how the youths of this generation can support their leaders.

The last Emerge Service of the year at City Harvest Church, held on Nov 15, kicked off with the vibrant praise and worship that is its trademark, but this year, with a special twist: colorful flags and streamers being waved and twirled as a prophetic movement by dancers and flaggers. 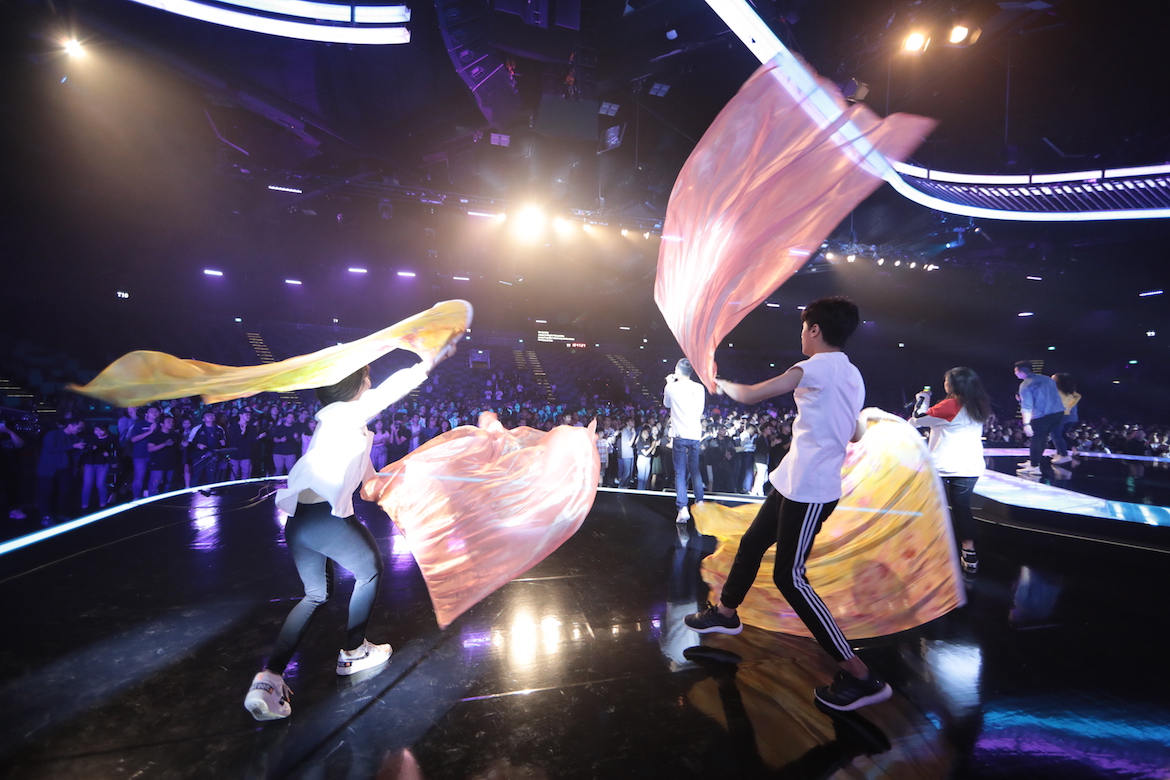 The youth were also treated to a witty drama about the qualities of being a cell group leader, titled “The Call”. It was specially prepared by the Emerge Drama team. The narrative follows what happens when one day during a cell group meeting, a member gets a phone call and suddenly becomes with her CGL. As she tries to navigate being a CGL, she realizes that it’s harder than she thinks. When she switches back into her own body as a cell group member, she then understood what it meant to be a CGL and took the time to appreciate her CGL more. 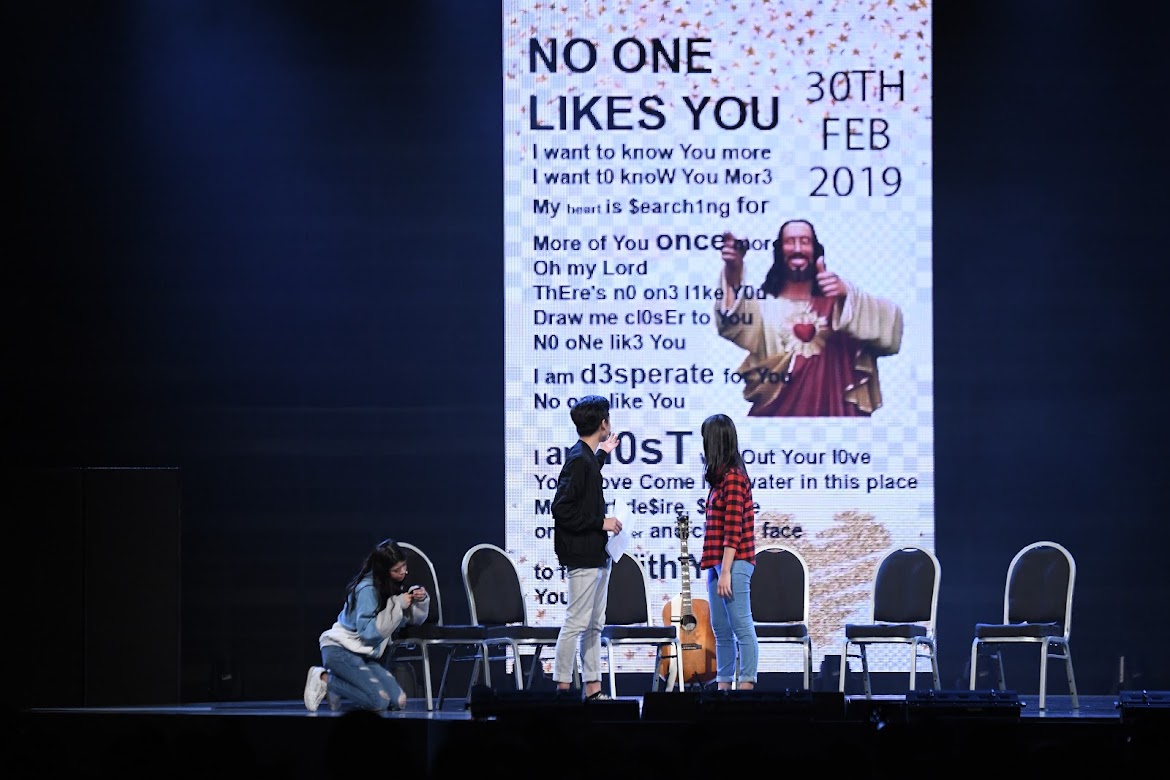 Starting from Numbers 12:6-8, Pastor Zhuang showed the congregation how Moses was raised up by God as the great deliverer of the Children of Israel and their leader. However, before he came into these important roles, Moses was first a shepherd (Exodus 3:1-2a).

FOUR THINGS ABOUT MOSES
As a shepherd, Moses was an appointed leader, and his hand was an extension of God’s leadership on the children of Israel. “Human leadership of God’s people is really God leading His own people through an anointed servant,” Pastor Zhuang explained. He encouraged the youth to allow their leaders to lead them, and to help their leaders and make their job easier. 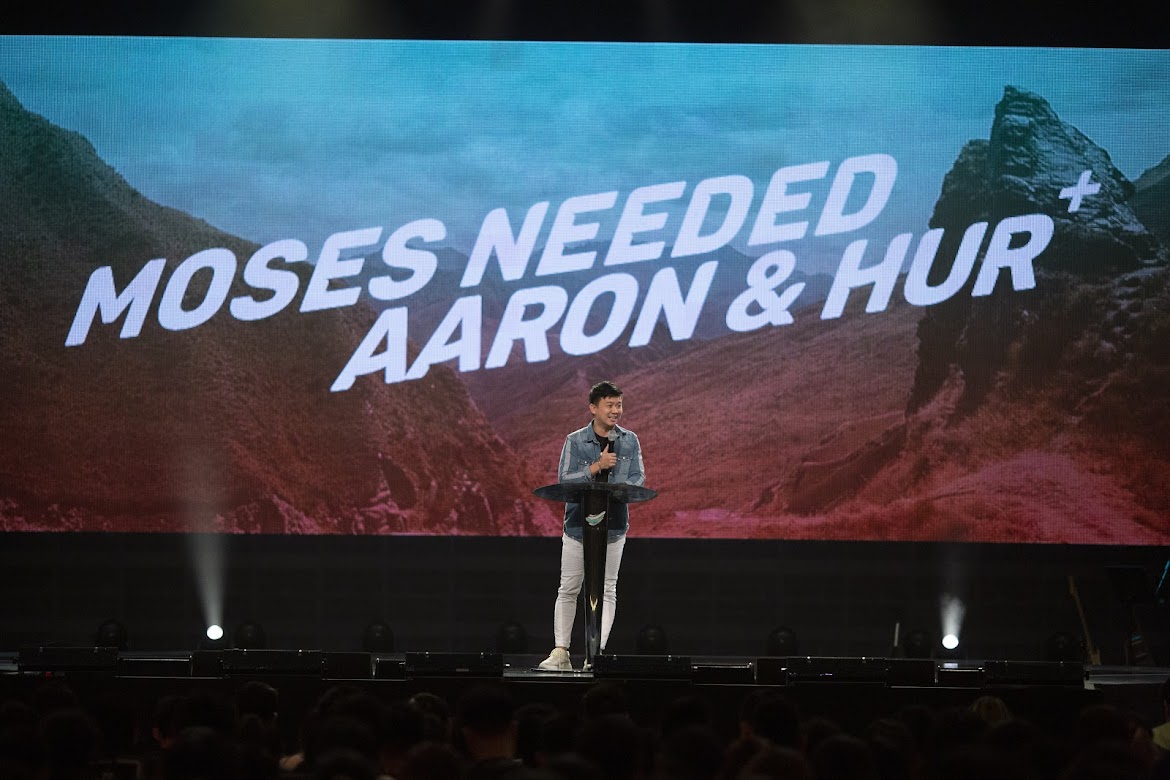 Moses was also a prophet. Exodus 33:11 reads, “The Lord used to speak to Moses face to faces just as a man speaks to his friend.” As a lover of God, the leader spends time in the presence of God and seeks the voice of God. Moses was the voice of God to the people, waiting on Him and listening in on how to lead His people.

As a priest, Moses was the voice of the people to God, interceding on their behalf. In Exodus 34:9, Moses identified himself with the people, functioning as a priest. Speaking directly to the CGL, Pastor Zhuang said, “Cell group leaders, as you spend time with your people, understand their needs as you start to intercede and pray for your members.”

Lastly, as a leader, Moses loved his people, maybe even more than he loved his life. Moses pleaded with God to forgive their sins, if not, “please blot me out from Your book which You have written!” (Exodus 32:21) Moses was willing to sacrifice himself, but he carried the burden for his people.

“Our ultimate leader, Jesus, not only carried our burdens, but He carried the Cross for us,” Pastor Zhuang pointed out.

The pastor then came to the crux of his message, preaching from Exodus 17:8-13, of how Aaron and Hur were with Moses while interceding for Joshua, and they supported him when his hands became heavy, where they eventually won the battle. The battle was not against the natural, but the spiritual, and it was won by leaning of God for His strength. “Not by might nor by power but by My Spirit.” (Zechariah 4:6)

As he interceded for Joshua in battle, Moses’ hands were heavy (Exodus 17:11-12). Pastor Zhuang related this to the CGLs, saying, “No matter how powerful or perfect you think your CGL is, I’ve got to burst your bubble – he’s still human, made of dirt and dust. There will be times he grows tired, and he will need help.”

THE CALL ON AARON AND HUR
When Moses needed help, Aaron and Hur stood by him, holding up his hands. When his strength began to fail, Aaron and Hur provided a rock for him to rest on. 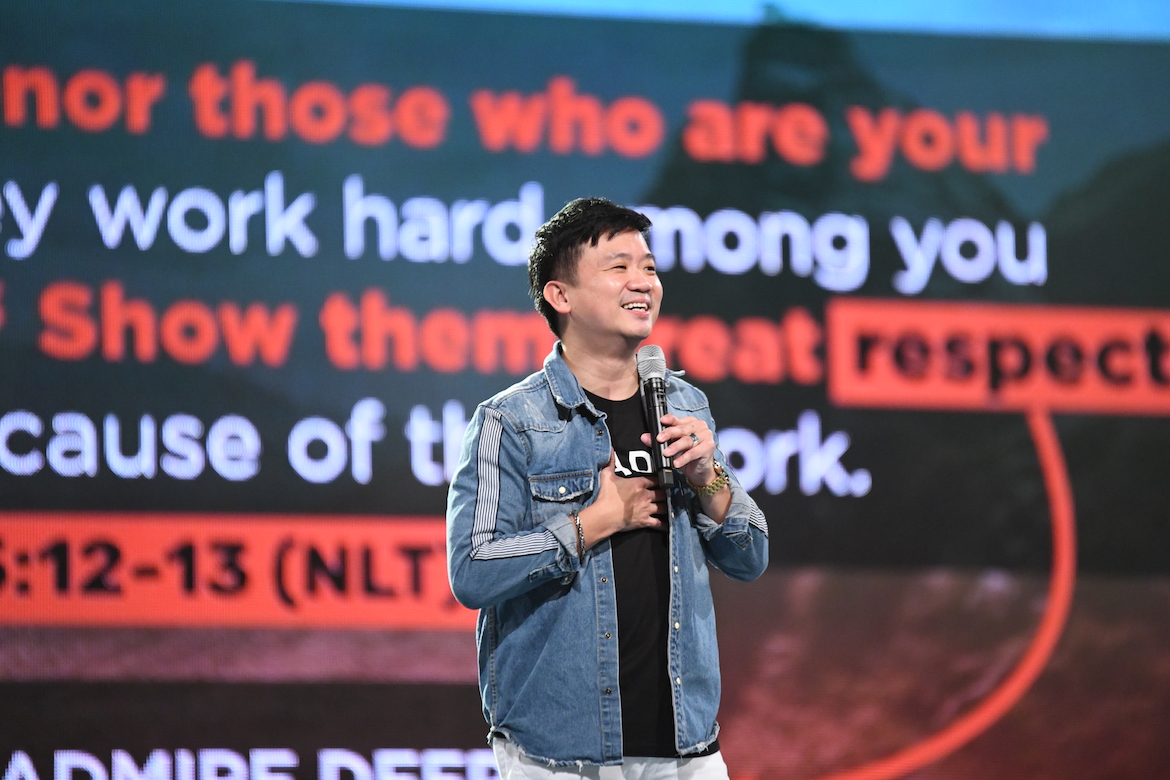 Reminding the congregation of this year’s Emerge theme, Grow, Pastor Zhuang used the word as an acronym for his four points on what members can do to become Aaron and Hur to the “Moseses” of their lives, referring to their leaders.

God-seeking. When Aaron and Hur stood by Moses, they did not just watch him pray, but they became involved in intercession as well. “When you love the presence of God and become a seeker of His presence, you bring a lot of encouragement to your leader. The same way Aaron and Hur supported Moses, support your leader in prayer,” said the pastor.

Respect. Aaron and Hur were with Moses from the beginning, when he went up to the mountain to pray. Leaders need for their members to stay with them, which sends the message that they are not alone in this race. Respect also means honoring your leaders (1 Thess 5:12-13a). Pastor Zhuang playfully chided the youth for not greeting him, while seriously telling them not to be over-familiar with their leaders.

Ownership. Aaron and Hur immediately provided the necessary help Moses needed without being asked. They were quick to react, to bring the rock to him. Members are to be armor-bearers for their leaders, helping to ease their burdens, running together with them, and taking ownership of the cell group’s vision.

Winsome. As spiritual soldiers, we are to use spiritual weapons to fight spiritual warfare against Satan and his demons. “We must have the boldness and holy determination to complete our Mission; to plunder hell and populate heaven!” Pastor Zhuang declared. “Don’t let your CGL be the only one concerned about souls and the growth of the cell group.” 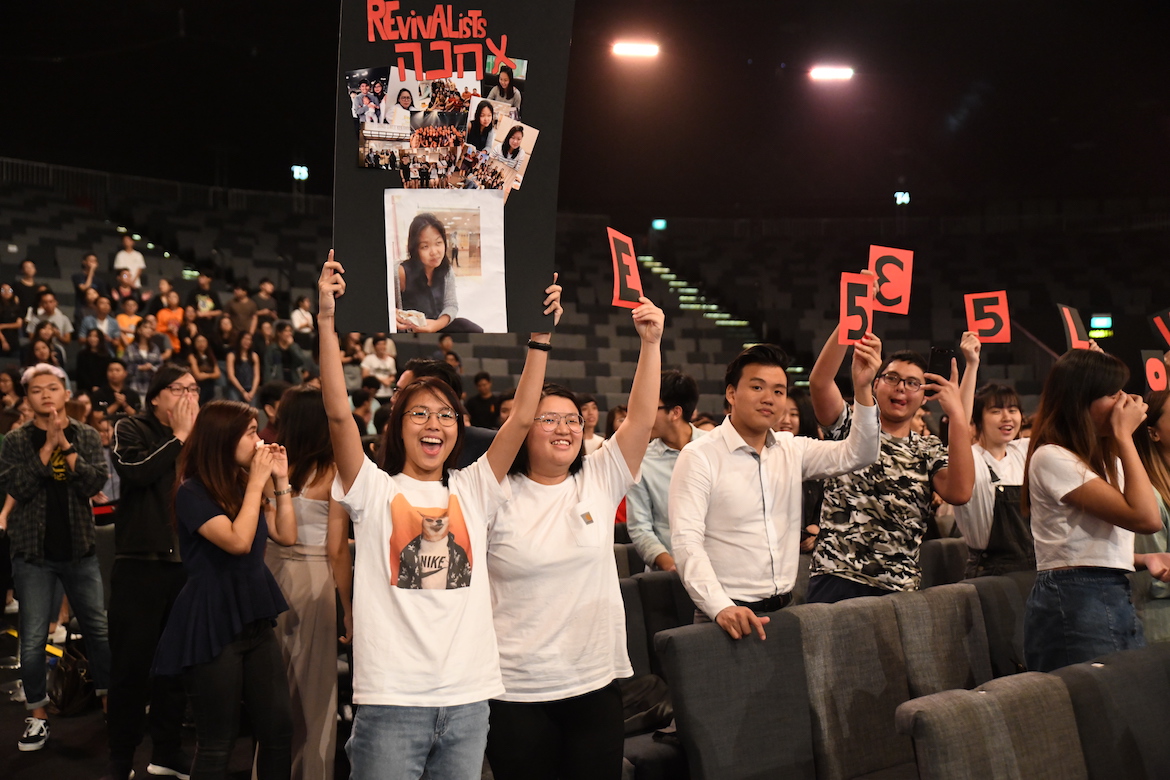 Ending off his message, Pastor Zhuang shared a touching testimony of a girl named Fishy and how her leader, Rhonda stayed by her side through thick and thin, showing that being present was the best present to her.

At the end of the service, a group sang “Thank You For Giving To The Lord” to the youth cell group leaders in the meeting, to appreciate all of them for their service. The leaders were also given a shirt with the word “LEADER” on it. For those who had been serving in the youth ministry for more than 10 years, they also received a special Emerge-edition NIV Study Bible. 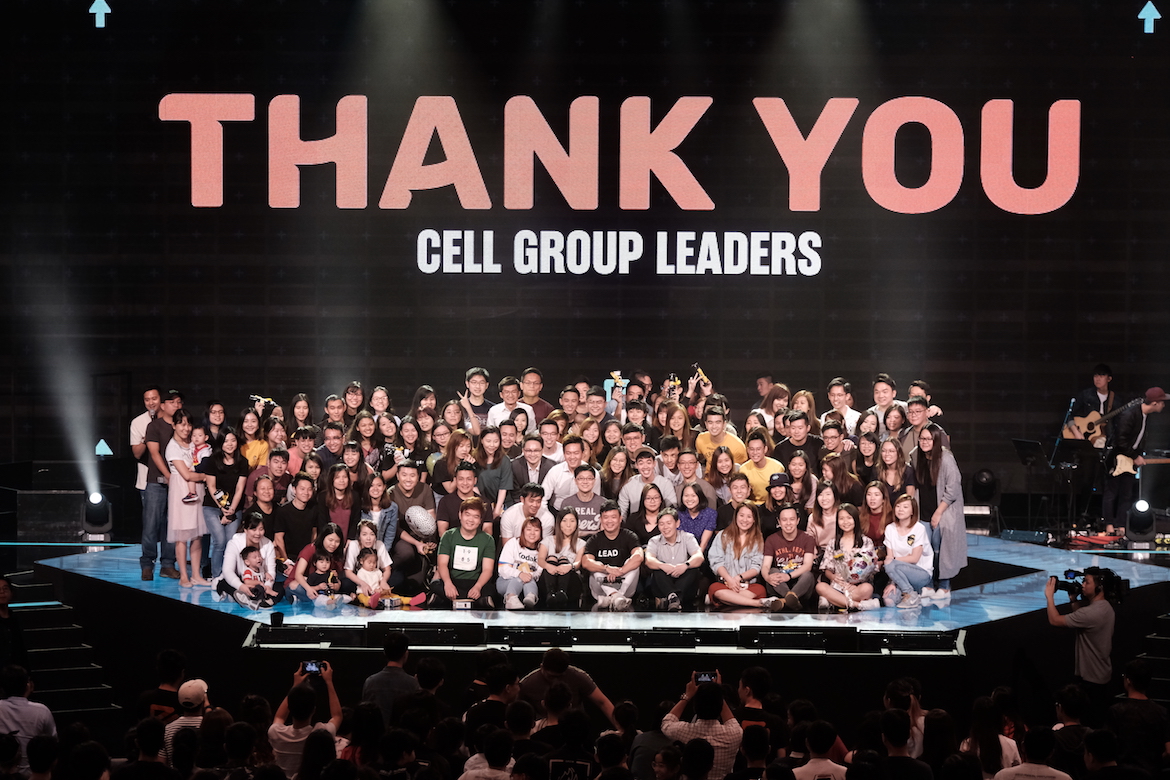