Prayer meetings are just not the same if they are not done corporately. City Harvest Church youths experienced this first-hand at the long-awaited on-site Emerge prayer meeting.

“Hello, hello Emerge! Are you guys excited for service?” These are words sorely missed by the youth congregation of City Harvest Church.

Oct 24 marks the day Emerge held its first on-site meeting this year. The youths were eager to immerse in the vibrant atmosphere at the Emerge Prayer Meeting once again after several months of meeting online. Indeed, nothing beats encountering God in His sanctuary. Rows of seats neatly arranged in pairs greeted the youths as they streamed into the main auditorium at CHC’s Jurong West campus. In line with safe-distancing measures, the youths could only sit in their allocated pairs, and inter-mingling between different seating sections was strictly prohibited.

Despite all the restrictions, the excitement of the young people was not dampened. A strong sense of anticipation filled the air before the prayer meeting even started.

The session kicked off with an exuberant time of praise coupled with an atmospheric session of worship—something that everyone was looking forward to. Although the youths could not sing out loud, they could still clap and lift their hands to express their love for the Lord.

Worship was a time where many young people got a glimpse of heaven on earth. The young congregation lingered in the presence of the Lord, and many heard His voice once again. This worshipful atmosphere set the tone for the rest of the prayer meeting that evening. The next segment was a time of games. Despite the safe-distancing measures, the planning committee did brilliantly to improvise and come up with engaging games—the youths were in for a treat! The sound of hearty laughter and cheers from the crowd reminded everyone about what it meant to be joyful in the house of the Lord. What the youths did not expect was the generous reward that awaited the top three winners. They walked away with amazing prizes which ranged from a set of AirPods Pro, to $200 worth of Foot Locker vouchers, and even a Secret Lab Titan chair! The winners were truly blessed and everyone was pleased for them.

The most enriching part of the service had to be the sharing of the Word—first by Audrey Ng, a CHC pastor. She introduced a new acronym to the youths— “WHD”—which stands for “Whole-Hearted Devotion”.

She defined the word “devotion” as conveying one’s selfless affection and dedication to a person or a principle. She pulled out the comparison between David and Saul as an example, pointing out how although David was flawed, his heart was after God’s own heart. On the other hand, Saul looked good on the outside, but his heart was not for the Lord. Building on that, she encouraged the young congregation to be wholeheartedly devoted to Jesus.

THE FIRE OF PRAYER

The highlight of the service was coming together in corporate prayer. As the youth worship leader and band led worship, CHC’s senior pastor, Kong Hee, got the youths to activate their powerful prayer language to pray in tongues. It was evident that the congregation had caught the fire of prayer—the entire hall was filled with the rumble of prayer.

Pastor Kong also encouraged the congregation to use clapping as a spiritual weapon of warfare to express their love for Jesus. Pastor Kong gave the youths a chance to pray and intercede for the person next to them. This made the prayer meeting “more personal and organic” as described by Joseph Koh, a 13-year-old student. 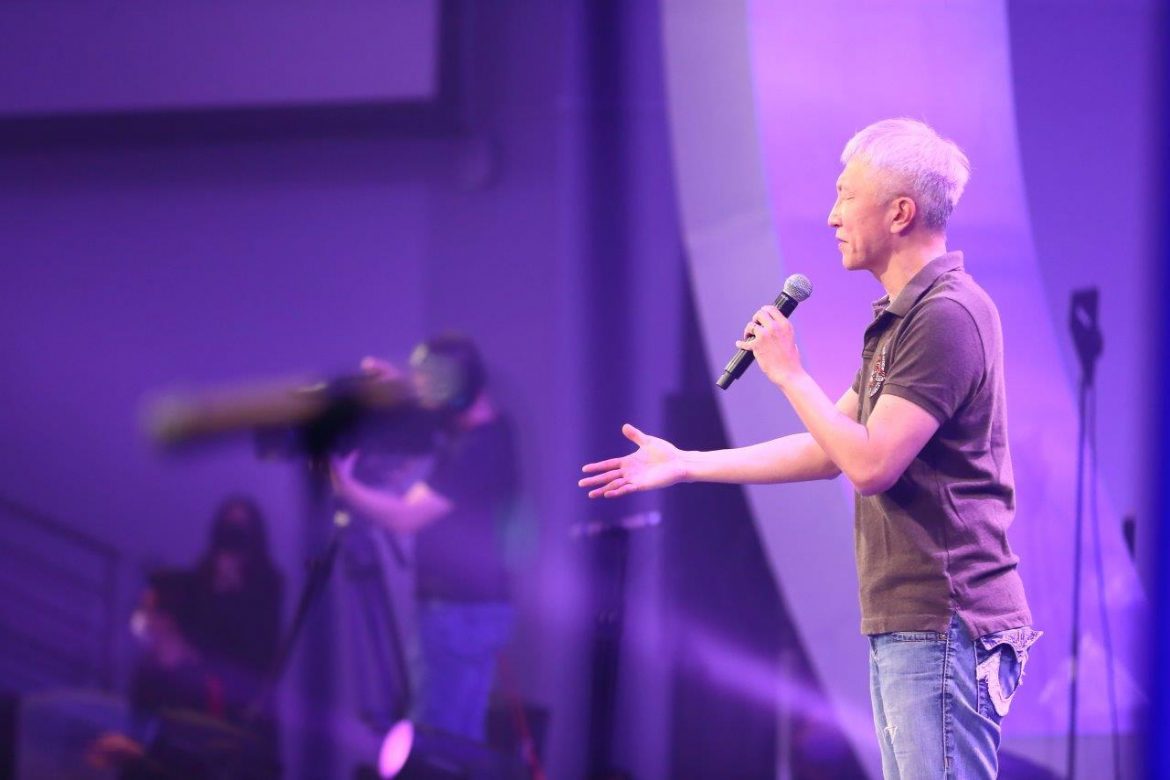 The two-and-a-half-hour prayer meeting ended too quickly for many. They had arrived hungry for God after not being able to pray corporately for a long time, and they left spiritually nourished and blessed by His presence.

“The presence of God was so strong and tangible; it felt like a revival meeting!” exclaimed Jordan Ong, a cell group leader in CHC. “I’m going to encourage all my cell group members to come for the next Emerge meeting!”

Many young people who had lost their fire for God because of the isolation during the pandemic, were stirred in their spirit again. Some of them are eager to restart campus prayer meetings in their schools.

Avner Lim, a 17-year-old student shared these sentiments. “After my N-levels, I felt like I had lost my passion for God. However, tonight He has shown me a new pathway and to come back to Him to be part of the seventh wave of revival! “

What an inspiring service it was for all the Emerge youths!