CHC has seen six revivals throughout its 32-year history, and as Pastor Kong Hee and Pastor Sun Ho told the youth leaders at a recent meeting, they are believing for a seventh. 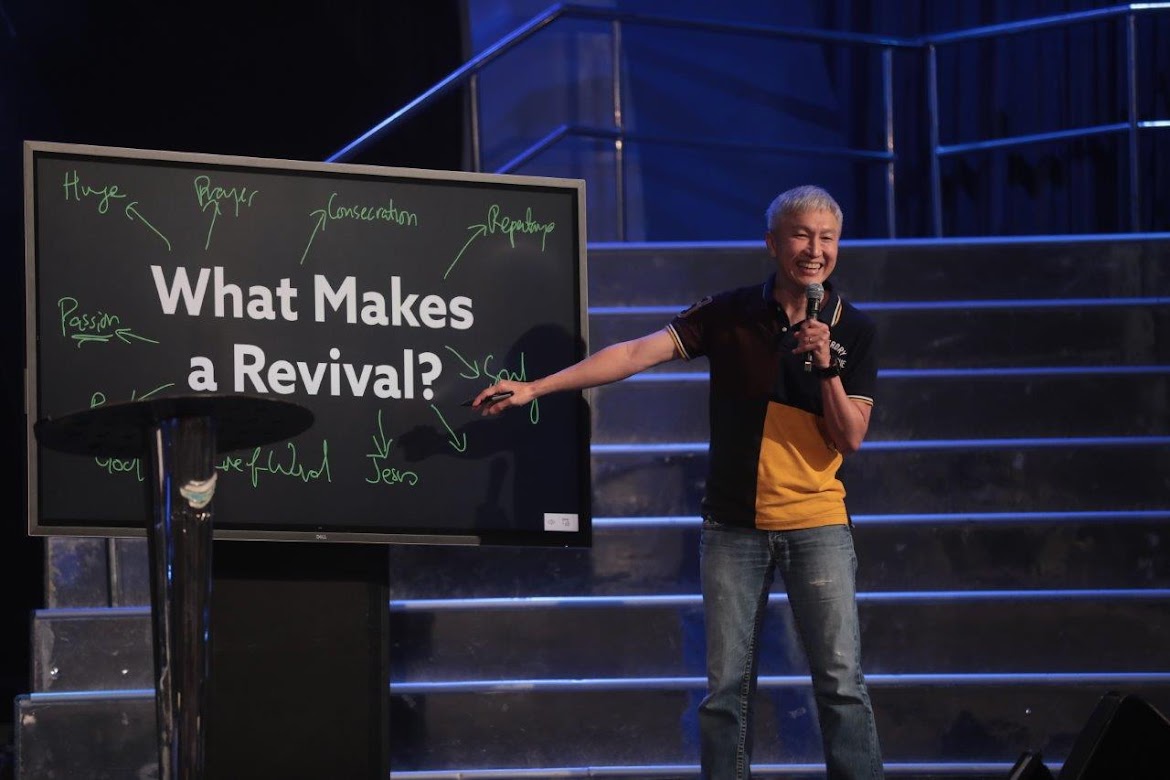 On April 27, City Harvest Church’s senior pastor Kong Hee and his wife Sun, addressed the youth leaders at an Emerge Leaders meeting speaking on the topic of revivals.

Right from the get-go, Pastor Kong encouraged the leaders to go on a pursuit for revival. He shared with the leaders six waves of revival that he had experienced.

THE SIX WAVES OF REVIVAL
The first wave happened in 1986 when Pastor Kong—then “Brother Kong”—and his cell group of three saw a growth to 60 members in a year. The group subsequently grew to 180, and then 500 members.

The second wave was in 1989 when he started City Harvest Church with 20 members. The church soon grew to about 800 members. That was also the year CHC’s Bible School, School of Theology was started.

The third revival happened when the church launched its Church Without Walls initiative in 1996. The church started reaching out to the community beyond the walls of the church and one year later, City Harvest Community Service Association was established.

2002 marked the start of the fourth wave when the Crossover Project spearheaded by Sun began. In those few years, the church saw massive growth to about 32,000 members, and services were held at the Singapore Expo to accommodate the congregation.

The fifth wave was in 2003 when the church launched Emerge, an annual conference for young people aged between 13 to 25. By 2007, over 6,000 youths were a part of Emerge, and Emerge spread throughout Asia.

The sixth wave started in 2002 in Taiwan and other parts of Asia and is still going on today. As a result of the Crossover Project, Taiwan saw about half a million people coming to Christ. The Christian population went from 3 percent to about 11 percent in that period of time.

GOD IS STILL LOOKING FOR SOMEONE TO STAND IN THE GAP
“Revival is not automatic,” Pastor Kong shared. The Azusa Street revival is one of the largest revivals known in history. It started in April 1906 and lasted till 1915. The next revival only happened 60 years later and was known as the Charismatic Renewal. In those 60 years in between, there was no major move of God.

Ezekiel 22:30 reads, “So I sought for a man among them who would make a wall, and stand in the gap before Me on behalf of the land, that I should not destroy it; but I found no one.”

The pastor told the congregation that God is constantly looking for people who were willing and hungry for revival to happen.

Pastor Kong also told the leaders that revival never needs to stop. “But you must pray, you’ve got to keep your hearts pure. You’ve got to come before God and allow the Holy Spirit to sanctify you,” he said, quoting his mentor Rev Dr Yonggi Cho, founder of Yoido Full Gospel Church at a meeting in Brownsville which had just seen a revival.

10 THINGS WE NEED FOR REVIVAL
Pastor Kong went on to share 10 things he noticed in the last six revivals. He stated that these keys things also appear in Acts 2 to 5. 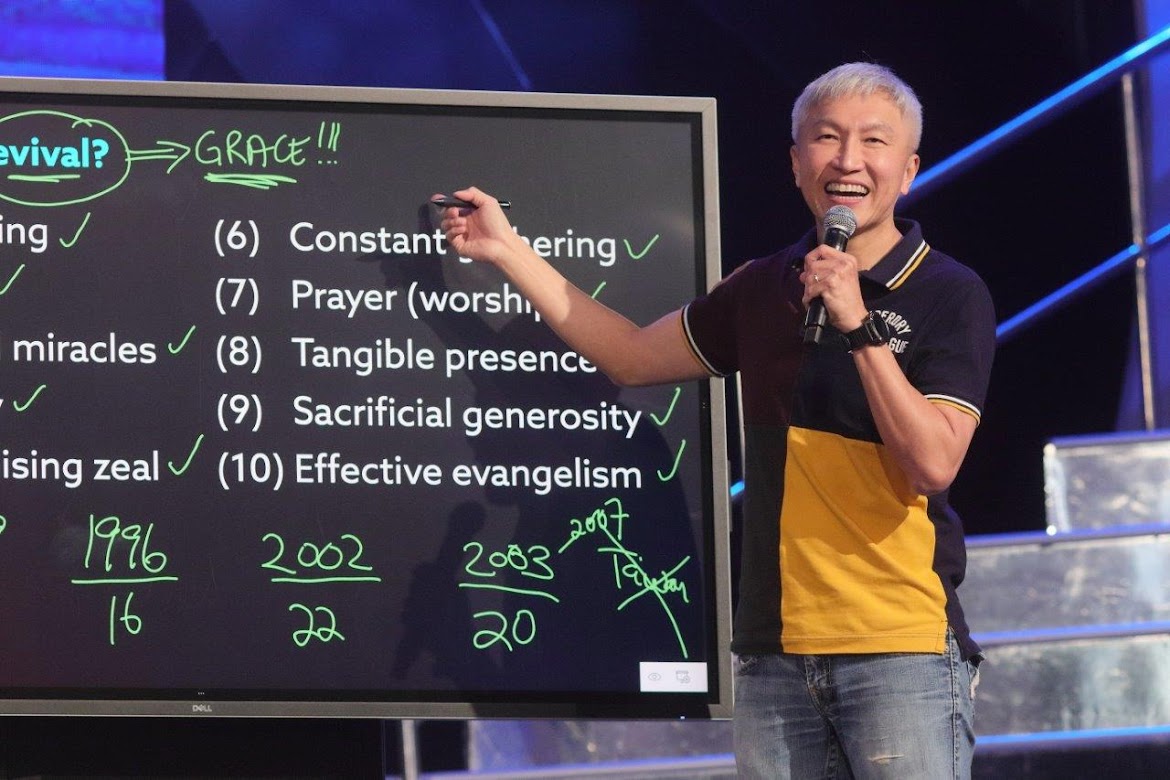 The first thing was sound teaching. Acts 2:42 records the church following in the apostle’s doctrine. The words used are “they continued steadfastly” in it, meaning that they did not just hear the teachings once, but they continued meditating on the word of God consistently.

Next, he talked about having moral purity, supernatural miracles, church unity and uncompromising zeal as important elements of a revival. Pastor Kong also talked about constant gathering among the church members. He remembered how, in the midst of revival, the church was always gathering in cell groups and meeting up with one another.

The other key element was of course prayer and worship. The tangible presence of God was in every single prayer meeting the church had in those days.

Pastor Kong also shared about sacrificial generosity. Turning back to the book of Acts, he noted that even though the people in the early church were selling and giving away their possession, they faced no lack.

When it comes to a revival, effective evangelism was definitely a key element. Pastor Kong then added that revival cannot be manufactured. “It is a work of God. It is 100 percent by grace,” the pastor elaborated.

Having said that, Pastor Kong emphasised that these 10 things were just the evidence of revival—when a revival comes, one would see these elements in it.

Sun empathised with the youth leaders, saying that with each generation faces different challenges. She recounted the challenges in her youth and her generation, which mostly involved parental objection to them becoming Christians. As most of the early members came from non-Christian households, it was tough following Jesus. Sun shared how she was unable to have a proper quiet time with God as she did not have a private space to pray at home. Pastor Kong also shared how Pastor Choong Tsih-Ming, one of the pioneers in CHC, arrived in church one day with a black eye, as a result of asking his father for permission to be water baptised. 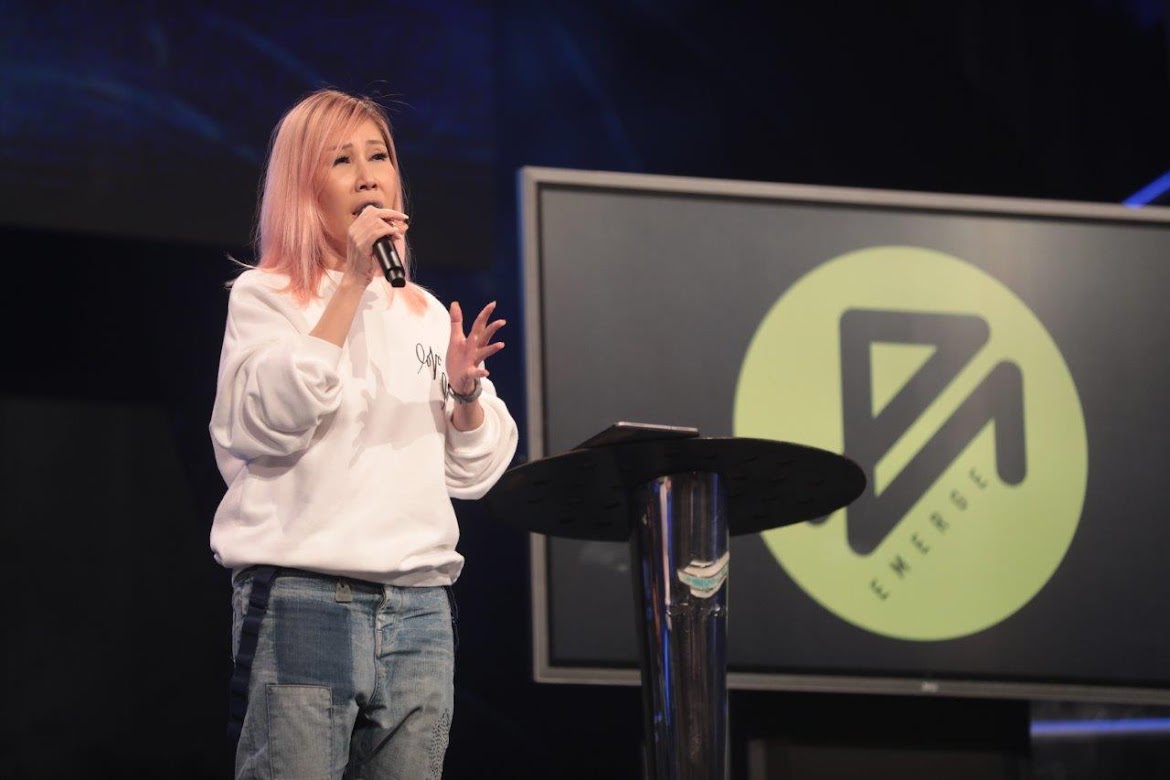 Pastor Kong encouraged the youth leaders by sharing from Acts 13:36, “Now when David had served God’s purpose in his own generation, he fell asleep; he was buried with his ancestors and his body decayed.” The pastor challenged the youth leaders to be like David: to rise up and fulfil God’s purpose in their own generation. “Different generation, different challenges, but same God,” he said.

Pastor Kong and Sun also debunked claims of the “numbers game”—a competition to see who can bring more people to church.

“Every soul is a number and every number is a soul,” Sun reminded the leaders. She taught that evangelism is not about gathering numbers to build an empire but to reach out to as many souls as possible because Jesus loves every single person.

THE NEXT STEP FOR THE YOUTHS
At that point, the pastors began to share their vision for the Emerge youths in the coming months. In the first quarter of 2022, CHC will launch dedicated youth services that are mainly led by youth. There will also be ministries led by youth. The idea is to create an environment for the youth of CHC to take ownership in their own generation.

He encouraged the young people to be hungry for spiritual encounters and to have the faith for mighty exploits. When they have that, they will see a great revival come in their generation.

He also taught them to be Godly—to be a righteous example in conduct, in love and spirit. They must also love the church and be serious about God’s Word, just as Jesus was found in the temple as a child, listening to and discussing scripture with the scribes and Pharisees.

The next thing the Emerge youth must have is favour with God and men. That is the ability to communicate and to be attractive to others. “In order to win souls, you’ve got to first win them to yourself,” Pastor Kong explained.

To support young adults serving as youth leaders, there will be seminars, workshops and interest groups to meet their needs and to equip them in the areas of ministry, relationships and career.

LAYING THEMSELVES ON THE ALTAR
As Pastor Kong and Sun closed the meeting with a time of worship, the presence of God was palpable in the auditorium. Pastor Kong imparted faith and boldness to the Emerge leaders, declaring Jeremiah 1:5-7 over them: “Before I formed you in the womb I knew you; Before you were born I sanctified you; I ordained you a prophet to the nations.” Then said I: “Ah, Lord GOD! Behold, I cannot speak, for I am a youth.” But the LORD said to me: “Do not say, ‘I am a youth,’ For you shall go to all to whom I send you, And whatever I command you, you shall speak.”

The auditorium became a giant altar—the Emerge leaders went on their knees in surrender to the Lord, singing with their hearts the classic worship song, “If You Can Use Anything Lord”, joining Pastor Kong and Sun in believing God for a seventh wave of revival in CHC.