Rise Up To The Calling Of God: Heidi Baker At Kingdom Invasion

Evangelist Heidi Baker brought to Kingdom Invasion 2019, the power and anointing of the Holy Spirit, inviting the congregation to answer to the calling of God. 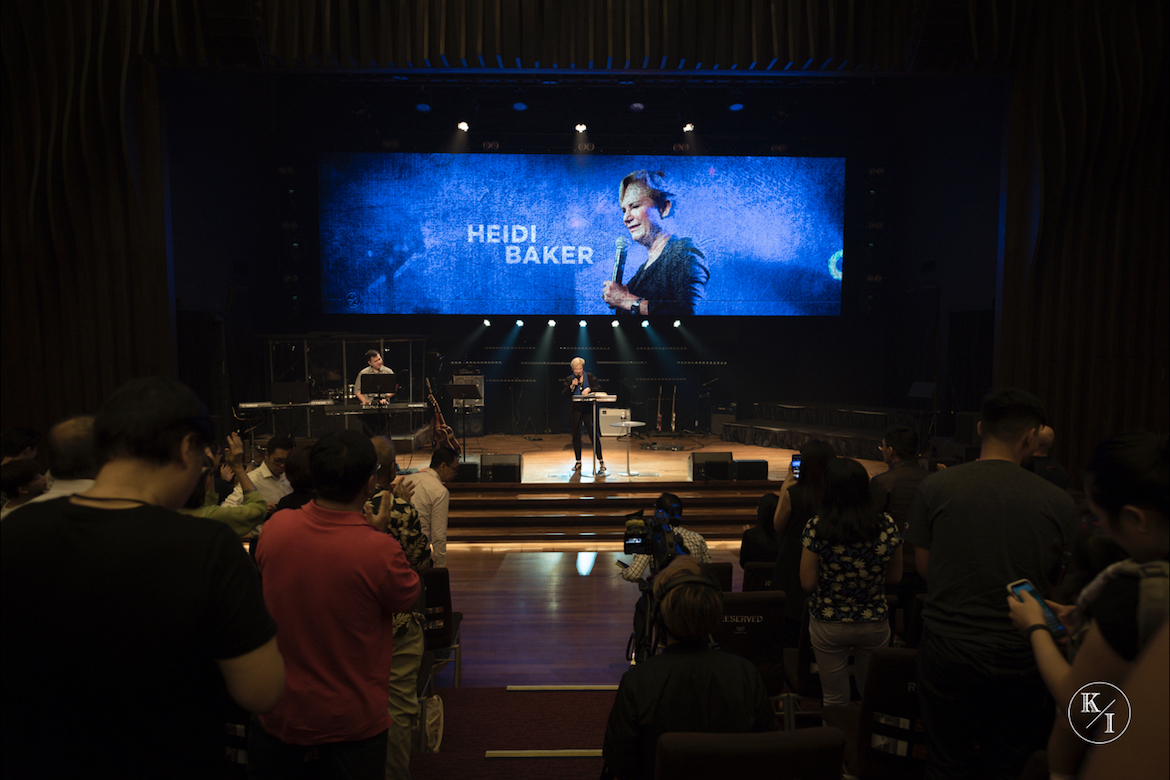 It was evident that Heidi Baker is used to giving the Holy Spirit full reign over her sessions. Right at the beginning of the first session of Kingdom Invasion on March 8, she led the attendees in a time of praying and soaking in the powerful presence of the Holy Spirit.

Pastor Heidi—called “Mama Heidi” by those in her care—is the CEO of Iris Global, a Christian humanitarian organization based in Mozambique. She is also a globally sought after speaker and preacher of the Gospel who ministers through the encountering and receiving of the Holy Spirit. She was preaching at the first installment of Kingdom Invasion Trilogy, an annual Christian conference anchored by Cornerstone Community Church.

She spent the rest of the morning session sharing about serving as a world missionary. That was a time when she spent 25 years serving the Lord without a break. During that season, she and her husband lived in the slums without clean water and, sometimes, without electricity. Their perspective of “being a good missionary” did not allow them to have breaks and vacations—they believed that was only for “wimpy Christians”. It resulted in them feeling burnout at the end of the day.

The Bakers thought they were going all out for God but it was really “running and running like hamsters on a wheel”. All this changed when they truly understood who Daddy God really was and how much He loved them. With that understanding, Heidi received a revelation of how God is fine with His servants needing a break.

Mutsumi Kobayashi, 34, an insurance claims handler, was deeply impacted by Pastor Heidi’s sharing. “She shared a story of how her little granddaughter’s only concern was to see her face on FaceTime after the family’s kitchen was burned down in a fire. That spoke to me of having peace in the storm. When we are so secure in the love of our Heavenly Father and know who we really are, nothing in this world can cause us to waver. Instead, even in the midst of the storm, the only thing we care about is to see His face.”

RISING AS AN EAGLE CHURCH
After a short break, Pastor Heidi went on to preach a strong message on building “an eagle church”. “The church is not meant to be eaten by the enemy,” she declared. “It is not meant to be a weak bird with weak wings. God called us to live in a place where we stretch out our wings and know Who we belong to!”

Using the illustration of a chicken that runs around without its head, she said that the church is not called to be a “chicken” church, wimpy and weak. A church is called to have the mind of Christ.

In a prophetic act of declaration, Pastor Heidi leads the congregation to declare: “I have eagle eyes!” Eagles, unlike chickens, can see with extraordinary vision and can fly above the storm. Pastor Heidi explains that this does not mean that a person cannot see evil, but that he lives in a different dimension of the Kingdom–the level of the King. “We have to be engaged in our identity and start soaring. This is not just for the special Christians but it is for every Christian in the Kingdom,” she said. “Get empowered with the supernatural power of God and soar above the storm. Wherever it is that God has called you to soar, get out of the cage and start being a voice in the darkness. We are all called to shine as many sons and daughters on earth; we are all called to do the things of the Kingdom.”

Sustainability engagement officer Alister Ong, 25, said, “I am reminded that we are called to be eagles to rise above the storms and soar; the wind that is under our wings is the Holy Spirit. He is lifting us up and sustaining us. We are not called to be chickens—short-sighted and keeping our eyes on the ground—but to look beyond the horizon on God’s eternal plan and purpose of our lives.”

During the altar call, Pastor Heidi shared a powerful vision she had: she saw a time when everything that could be shaken was shaken. Those who had resources one day were poor the next day. In this vision, she saw the church rising up despite the shaky world around them; the churches in Asia rose up and took their positions as eagles, and the churches in Singapore rose as the Antioch.

In the midst of this, there were some who were cowering in fear. She declared, “The Lord says, ‘Tell the church they are not called to be chickens but to live like eagles! Tell them not to be afraid of the darkness or of the shaking. This is their time to soar! As they soar above the storm, I will tell them where to go and when to swoop down.’”

The pastor reminded the congregation that Jesus is their Supreme Commander, sending them not just to the nations but also to their workplaces across the street. He is sending them to be a voice, to carry His supernatural power into their world.

She also said that God has called Singapore to rise as the eagle church to take the mantle of the Antioch nation. As long as the church keeps its eyes on Jesus and allows the wind of the Holy Spirit to bring it higher, it will emerge victorious in Jesus’ name.

“HERE I AM, SEND ME!”
The evening session of Kingdom Invasion was not a typical preacher’s three-point sermon. It was more like Pastor Heidi having a conversation with the Holy Spirit with the congregation listening in.

Right after worship, Pastor Heidi walked up to the stage and started praying. She sank to the floor, sensing the Holy Spirit wanted to do a work in the congregation. The pastor began by praising Jesus for all He is doing. She cried out, “Let’s not even wait!” and said to the people, “I know you are being sent, but I don’t know where you are going. Are you willing to go?” A few from the audience responded “Yes!” loudly.

Pastor Heidi went on to ask the Lord for the sound of His children rising up. The audience begins to bubble up in tongues and cries of desperation towards the Lord. It was a raw moment between the Lord and His children.

She was still prostrated on the stage floor when she cried out from her spirit, “Wake up your sleeping beauty bride, God! Where is the voice of a lover who is not afraid to show that he or she is willing to give all that is within them?” she said.

Through her Holy Spirit-inspired exclamation, Pastor Heidi gave an invitation to the audience to become a sound of those who were one in God’s love and to break the chains of sin. The congregation responded to her invitation in loud cries of devotion and love towards God.

“How will they know, unless we go? Is there a ‘yes’ cry?” she asked. “There are some here who are willing to go for the One who is worthy, no matter what it costs them to go!”

She reminded the congregation of the great invitation to walk in the Lord’s calling as she did in her years as a missionary. She exclaimed, “He will inconvenience you! Will you by grace say, ‘God, if it is possible—my brain does not understand but I say yes with my heart before I understand with my mind. Here I am, send me!’”

The pastor then began to pray for the congregation. “Lord, put courage within them! Put a John 17 kind of courage within them that they can light up with the light of Jesus that will not be quenched by fear or silenced by hatred.” It was an intercessory cry for the church in Singapore to be bold and fearless for Jesus. Many responded to that invitation by coming forth to the altar area, prostrating before the Lord.

There was no music, only the sound of Pastor Heidi praying earnestly. 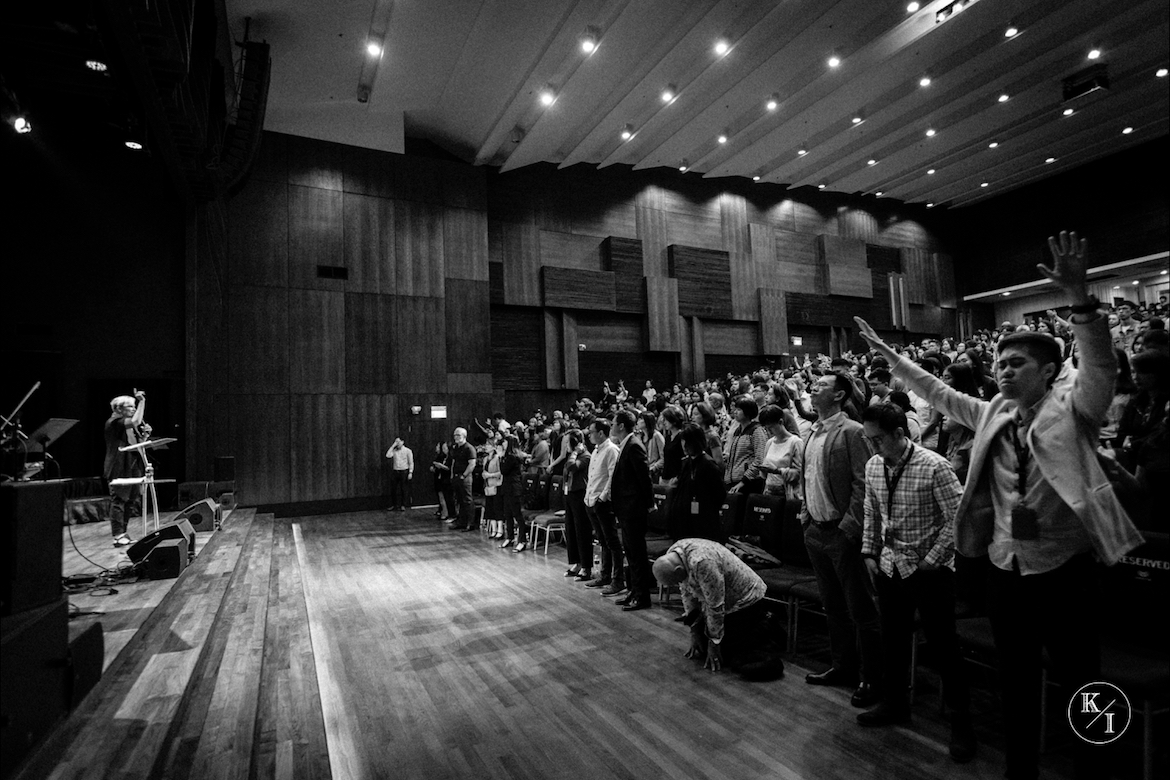 Hannah Chai, 27, a teacher,  responded to the altar call. She said, “Through Pastor Heidi’s prayer and exchange with the Holy Spirit, my heart committed further to the ‘yes’ I had given Him. I pray that God will help me not to take His call lightly, even if it will cause me inconvenience and to give me a strong heart to serve and love souls. “As I left the night session, I knew I left my life at the altar to Him. Jesus is enough for me.”

“This was the best sermon anyone could receive because it was a direct message from God Himself, bidding us to come face to face with Him,” said Elaine Chen, 31, a Bible school student. “I had been struggling with self-doubt but today I felt that God wanted me to affirm my ‘yes’ to Him again like the renewing of a wedding vow. Heidi Baker taught me that ministry is to have a singular focus on Jesus our Bridegroom. I am so thankful to God for leading me here.”

The session closed with Pastor Heidi ran off the stage to join the congregation on the floor in the pure worship of the Lord.

Cherie Anne Lian is a pursuer of the presence of God and enjoys soaking in His love & presence. She treasures hearing the voice of God at every opportunity and endeavours to stay close to the Holy Spirit whether be it in the boardroom or at home. On a normal day, you can find her reading a book or journaling. As an individual, she is a Daughter, Sister, Friend and a banking professional.

Worship Took My Breath Away…Then It Gave His...