The Blessing SG: Singing A Prayer Over The Nation

Join The Blessing SG this Sunday, May 31, 8pm, to sing the blessing in Numbers 6:22-27 over the nation–an initiative that CityWorship is a part of.

This Sunday at 8pm, the Singapore Church comes together to release a blessing over the land. Join us. SUNDAY, 31ST MAY, 8pm on this Instagram acc. Available on FB & YouTube too, link in Bio. #theblessingsg

WHAT & WHY
“We are declaring a blessing over Singapore.”

The Blessing SG is an inter-church initiative in Singapore that gathers all churches to proclaim a blessing over our nation in song.

On its website and social media platform, The Blessing SG explains that this initiative is “about the Church in Singapore coming together as one, to bless our community beyond the good works that we have undertaken to serve them.

“The powerful priestly blessing in Numbers 6:22-27 has been spoken over generations of lives all across the world. Songs have been written with these words–most recently by Kari Jobe, Cody Carnes, and Steven Furtick of Elevation Church.

“As we sing this prophetic song over our nation, our hope and prayer are that God will move in a fresh and powerful way through the church here.”

WHEN & WHERE
The Blessing SG is inviting all Christians in Singapore to join the launch of the video this Sunday, May 31—Pentecost Sunday—at 8pm, Singapore time.

The song “The Blessing”, written by Kari Jobe, Cody Carnes, and Elevation Church has been a blessing to many during the COVID-19 pandemic. Bethel Music included it in their May 2020 album Peace. Actor-singer Selena Gomez shared her version, shot at home, on Instagram. “The Blessing” has become the prophetic anthem for those fighting the virus in hospitals, for those who can’t see a future beyond the lockdown, for those who are struggling to overcome the loneliness and worry in isolation, and the ones in this world who need a reminder that God is still with them through it all.

Churches from different nations have embraced and adopted the song wholeheartedly. Churches across the UK got together virtually to sing The Blessing, to be followed by churches in Malaysia putting together their video The Blessing in different languages.

The Blessing SG has gathered singers and choirs from churches around Singapore, and an open invitation to Christians to record themselves singing “The Blessing”in English, Mandarin, Bahasa, Tamil, and Sign Language. The various renditions will be pieced together into one song, to be debuted tomorrow night.

PARTAKING OF THE BLESSING
City Harvest Church’s worship team, CityWorship has the privilege to be a part of SG Blessing Project.

“There was a public call to be part of The Blessing project as the Body of Christ in Singapore. Pastor (Lin) Junxian, who has pastoral oversight of CityWorship, approached Pastor Andrew Yeo from Cornerstone Community Church and asked how CHC could be involved, to stand together in faith with the churches in Singapore during this season. That’s how CityWorship became part of the project,” explains vocal supervisor Alison Yap. CityWorship formed a choir of 24 to contribute to this project. 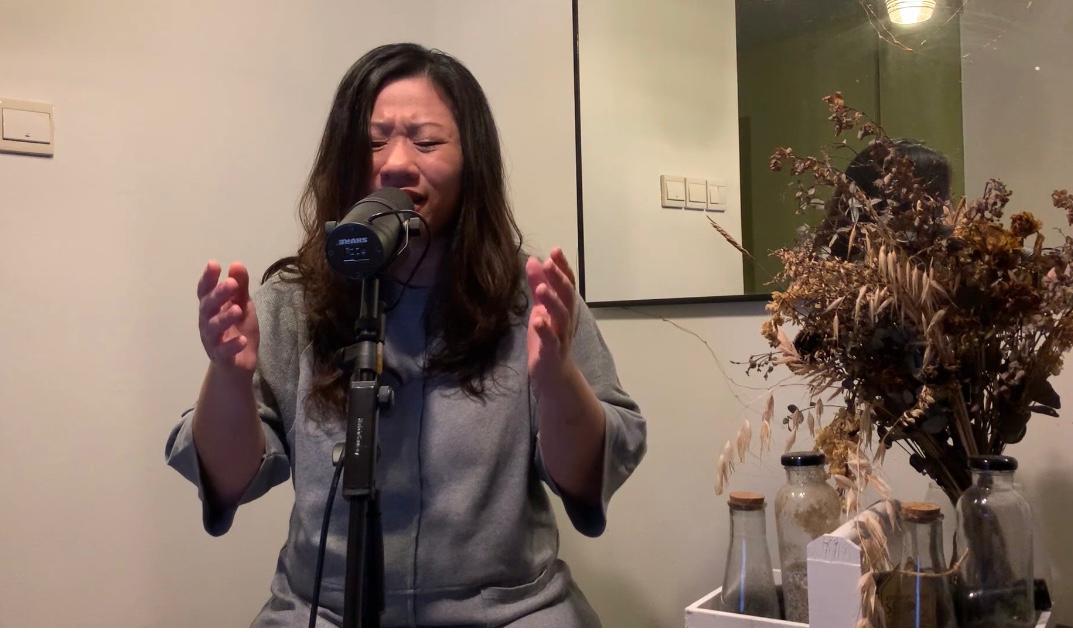 Alison Yap recording her vocals for The Blessing SG

Following the instructions on the website set up by The Blessing SG, the choir members recorded their parts at home. Not everyone has a microphone at home, so some had to rely on their trusty cellphone microphones. The key singers audio-recorded their voices individually while the rest of the choir recorded in groups according to how they harmonize. Once they were done, they submitted their audio recordings well as their video recordings of each one singing.

“It was quite an urgent project,” Alison adds. “It was decided on a few weeks back and everything came together within a short few days. After a briefing given via Zoom, we had about six days to submit our vocal and visual recordings.”

Having to record from home instead of the studio posed several hurdles.

“Finding a conducive environment to record both vocal and visual was the biggest challenge,” Alison shares. “It couldn’t be noisy, and the visual background needed to be presentable. I have four kids so my house is not exactly quiet at any time of the day.”

Alison adds that she had problems coordinating and uploading all the recordings because she is not tech-savvy. “I’m thankful for my husband (William Ng, CHC’s audio engineer). He basically did everything for me. He was my audio engineer and videographer, and he helped me manage and upload all the files.”

The mother of a baby and three young children had to squeeze in small windows of time to record while the baby napped and the children were entertained by the laptop.

“In the midst of recording some days, I had to cook porridge,” she recalls, laughing. “But all in all, I’m very grateful to be involved in this project. I hope this is will be a blessing to the whole of Singapore.”

Another CityWorship singer Alec Ngo says, “The experience of working together with so many singers from the comfort of my home was certainly fun. While it was refreshing, it was not without challenges and some frustration. The noise was one major challenge for parents with kids at home. I remembered discarding multiple copies of a recording because I could hear my boys shouting even though I had tried to isolate myself in a room with makeshift soundproofing. I ended up doing the recording in the night after putting my boys to bed, keeping my fingers crossed that I would not wake them up with my singing.”

But Alec gained a revelation from his imperfect circumstances. “One thing I was reminded was God’s omnipotence. Despite all the flaws and imperfections in our recordings from home, when I listened to the draft copies of the combined recording, I could feel God working. Indeed when two or three gather in His Name, He shall be in our midst.”

Choir member Jace Ang, a mother of two young children, also had to make sure that her children were sleeping before she could do the recording, which meant that she could only do it late in the night. But still, she found the experience meaningful.

“This project is a declaration that as Levites serving the Lord, we can sing the Benediction prayer from Number 6:24-26 over Singapore, and the rest of the world. It is a prophetic song for this season,” she says.

“As much as we are doing this for others, we were also blessed to the core of our spirit when we kept singing the lyrics during the recordings. We pray that the COVID-19 season will be over really soon and that the Lord’s covering protection be upon everyone!” 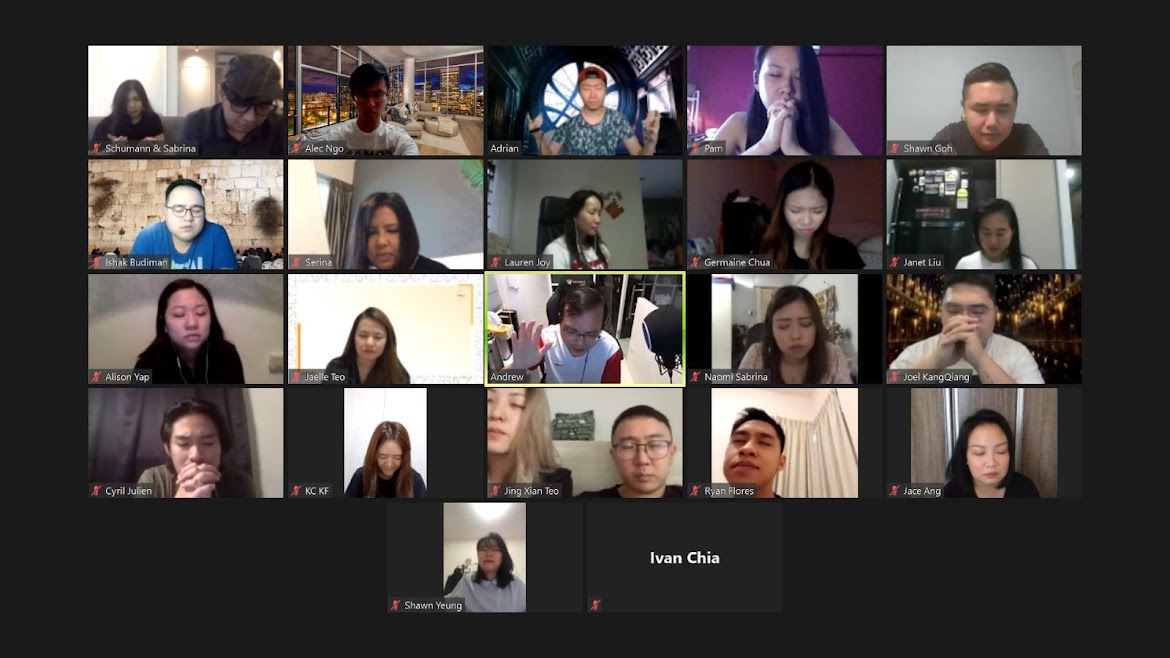 Another challenge that the singers faced was to get the parts and lyrics right. “For me, it took about 10 recordings to get everything right,” Jace admits.

CityWorship singer Laelle Loong also found this challenging. “I’m not that good at harmonizing,” she says, “so it took me nearly two days to record my vocal parts.”

While it was hard to record alone, Laelle found support from the group. “It was really fun though because once I shared on our group chat about my struggles, the rest of the singers was so encouraging. They cheered me on and shared their struggles as well. It was funny to hear their side of the story. It’s great that I got to embark on a meaningful project with them during this period of time. I’m thankful for such a community to complete this together.”

Indeed, the struggles only made the project more special. “The experience was both heartwarming and challenging at the same time,” says choir member Sabrina Fonseca. “It was heartwarming that through this project we were able to come together and serve with each other again as a ministry to declare the blessings of God upon our nation during this difficult season we’re in. But there were also many technical challenges, for example, after one of the recordings, I realized that the microphone was too sensitive and had picked up the sound of the draft from my air-conditioner. I had to try a few devices before deciding to re-record everything again on the best sounding one.”

This has taught the singers to appreciate the sound engineers who take the many recordings and transform them into one powerful performance.

Beyond all the individual experiences and revelations, The Blessing SG is a powerful exercise—hopefully not the last—in uniting the church in Singapore as one to call upon the Lord and to bless the whole nation.

Do tune in at 8pm tomorrow to experience The Blessing SG!