We stand between two generations of praise and worship—how can one make room for the other? A worship leader and pioneer of City Harvest Church explores this duality. Today’s praise and worship songs are typically characterised by syncopated rhythms, catchy hooks, melodic riffs and lyrical poetry. They undoubtedly carry the presence of God and the anointing to lead worshippers into encounters with the Holy Spirit.

They represent the sound of today’s generation of digital natives who are unreservedly expressive and often inspired by music, social media and a desire to connect. Unapologetic about their feelings, they have no qualms about speaking their mind. Hence, they sing unabashedly about the reckless love of God, and how life is a burst of living colour. They sing of seeing lightning and hearing thunder, about laying back against God and feeling His heartbeat, crying out for first love’s fire, and being drenched in His love. 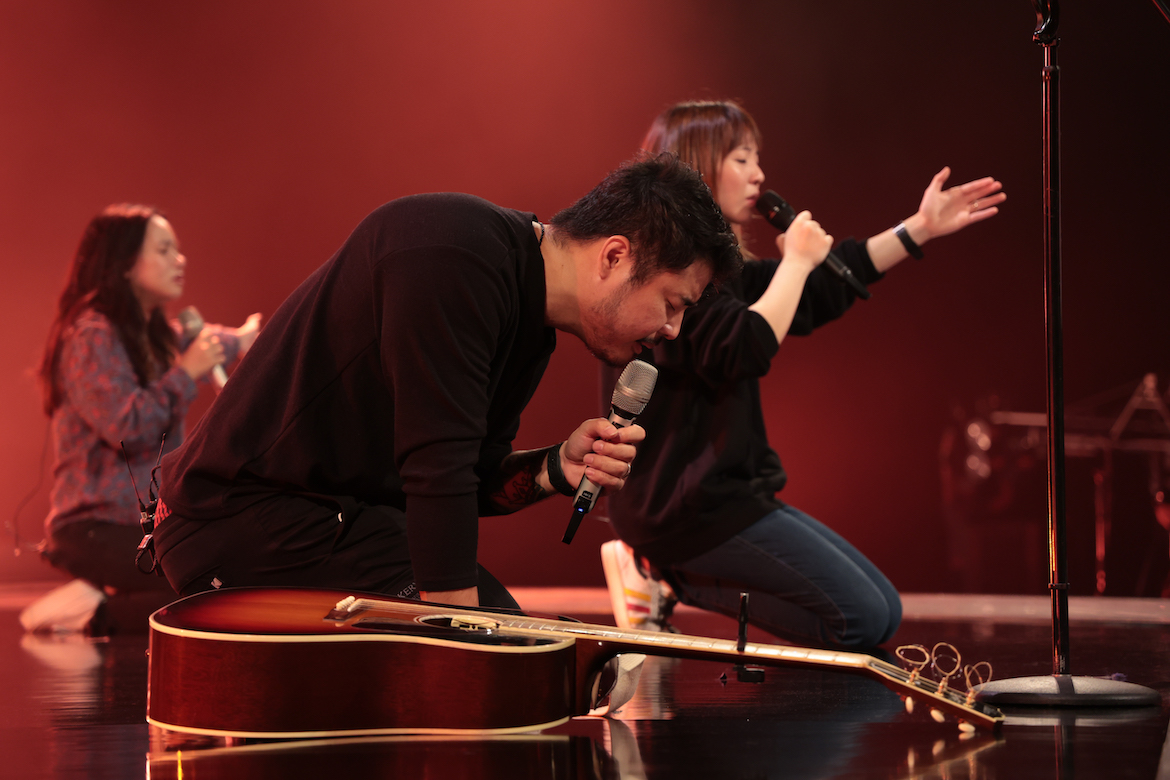 Amos Ang, Lee Seow Ting and Zann Foo are part of a new generation of worship leaders in CHC

The truth is, worship stems from the heart, no matter which era we come from. But what makes some churchgoers keep longing for the praise and worship of yesteryear?

There’s no denying that’s it’s human nature to look back on the good old days. Those of us who have been in church for a few decades feel an affinity for older and simpler worship songs and the nostalgia that comes with it.

The pioneers of the City Harvest Church grew up in the ’80s and ’90s. This is the generation that has witnessed major evolution and advancement in society—from the rotary dial telephone to the mobile phone, from letter-writing to emails, from vinyl records to cassette tapes, then CDs to music streaming apps. When it comes to adapting to change, the pioneers are mostly champions. But why does “old” worship occupy such a unique place in our hearts?

In the early days of Ekklesia Ministry (before we were registered as CHC), most of us were in secondary school. During the weekdays, we’d make a beeline for 41-A Amber Road straight after school, just to hang out, pray, worship God and have Bible study. Someone would pick up the guitar, and for the next hour or two, we’d be worshipping God and praying for one another. Other times, someone would suggest, “Let’s do street witnessing!” And off we’d trot to Parkway Parade to share the gospel in pairs. All we wanted to do was linger in the presence of God and do life together. Saturday was the highlight of the week where we would have our cell group meetings—five cell group meetings conducted back to back in a room roughly 400 square feet in size. Chairs would be stacked to one side to create an open space for around 40 sweaty and grubby youth to kneel down before the Lord. The air would be full of excitement and endless chatter, mixed with the pungent yet comfortingly familiar aroma of air freshener mixed with perspiration and smelly feet. There, we worshipped the Lord and experienced encounters with the Holy Spirit that would last a lifetime.

We sang songs from Integrity’s Hosanna! Music, which was at the forefront of Christian Contemporary Music back then. Songs by artists such as Don Moen, Kent Henry, Marty Nystrom, Ron Kenoly, Lenny LeBlanc, Bob Fitts, Bobby Michaels, Sandy Patti and more,  were ministering and beautifully simple—a verse and a chorus—and sung over and over again. The lyrics usually contained Bible verses, which proved helpful when it came to memorising Scripture.

When these songs were sung, many of the CHC pioneers were in the initial stage of loving and knowing Jesus. We were full of passion and excitement for the Lord. We lived by what we sang—meaning every word—to lyrics like “holiness unto the Lord”, “we will abandon it all, for the sake of the call”, “I have a destiny I know I must fulfil”, “I was born for such a time as this”, “Christ in you, the hope of glory”, “a heart that follows after You.”

Till today, songs like “Holy Spirit Thou Art Welcome”, “The Holy Spirit Has Come” and “A Pure Heart” still evoke an affection for the Lord as it did in the early days, allowing us to enter the presence of God instantly. That’s why you often find the pastors of CHC on their knees in tears, or singing aloud with gusto when such “old songs” are sung in service.

For many of us “old-timers”, it’s not about wanting to hold on to the past or being unable to let go. The connection we have to songs of our era brings us back to our first love with the Lord. Worship stems from the heart, no matter which era one comes from

MAKE WAY FOR THE NEW THING

There is a passage in Ezra 3:12-13 that always intrigues me. It says, “But many of the priests and Levites and heads of the fathers’ houses, old men who had seen the first temple, wept with a loud voice when the foundation of this temple was laid before their eyes. Yet many shouted aloud for joy …”

I wonder, were they weeping because they missed the former glory of the first temple? Or were they weeping for joy because their hearts were grateful that the presence of God was once again with them? Maybe it’s both. This verse describes the paradoxical situation we are in: on the one hand, we wished things were simpler; and on the other hand, our hearts are full when we see the younger generation coming in to their own experiences and encounters with the Holy Spirit.

We are living in a time when a new wave of worship is swelling up and looking like it is about to engulf us. But one defining characteristic of waves is that they overlap, one with another and two can co-exist for a time. This is the balance of the old and new, and it’s time for us to ride the new wave of revival. Isaiah 43:18-19, says “Do not remember the former things, Nor consider the things of old. Behold, I will do a new thing, Now it shall spring forth; Shall you not know it? I will even make a road in the wilderness And rivers in the desert.” Praising and worshiping with flags at weekend services

Don’t we know it! In the same way we seamlessly handled the evolution from one era to another, we can make room for new experiences in worship. Whether it is repeating the same line over and over again until you become one with the words, or singing lyrics that resonate deeply in your heart because the words are just so beautifully descriptive, your worship to God is not defined in the method or the style. It stems from your heart.

The future belongs to today’s generation. While we can talk about the former glory all day, let’s eagerly move forward and wholeheartedly embrace all that God is going to do through the next generation of CHC. It’s their time and they are the anointed ones to reach their generation and beyond. As a worship leader, the author comfortably straddles both worship favourites of the “old-timers” and the worship songs of today

These were some of the songs we used to sing in the late ’80s and early ’90s. Have a listen or worship God using these songs in your quiet time.

Don Moen
“Ah, Lord God”
“I Am The God That Healeth Thee”
“I Want To Be Where You Are”
“Let The Redeemed”

Marty Nystrom
“I Sing Praises”
“Times Of Refreshing”
“As The Deer”

“My Life Is In You, Lord” by Joseph Garlington

“What A Mighty God” by Pete Sanchez

“Nothing But The Blood” by LaMar Boschman

Serina is often described as one who speaks her mind and wears her heart on her sleeve. This mother of two serves as a worship leader in church. One of her dreams is to sing in a bar and another is to write a blog. Why hasn’t she started a blog yet? “Because I’ll stumble people with what I have to say!”