Help For The Children Of Myanmar

The adage “money cannot buy time” is true in most circumstances—except this one. It was on a mission trip to Yangon, Myanmar in August 2015 with his cell group members from City Harvest Church that freelance writer Eugene Tay observed the many unmet needs around him.

Over the course of four days, Tay, 27, and his cell group visited two orphanages, Immanuel Shelter and Shalom Orphanage, and came face-to-face with the impoverished living conditions of its inhabitants, from mosquito infestations to leaking roofs and threadbare mats.

While Myanmar’s dictatorial regime that lasted half a century has ended, its people continue to experience a severe economic and class divide. Poverty has forced many Burmese parents to abandon their offspring at orphanages, temples and churches to give them a better chance at life. However, without sufficient government aid, these orphanages often struggle to keep operations afloat.

One of the darkest times was when Cyclone Nargis struck Myanmar in 2008, said Lian Thang, a pastor who chairs 17 Myanmar orphanages with more than 758 children under his care. By God’s grace, they received funds from churches and individuals in Myanmar, Singapore and Malaysia for the rebuilding of the destructed buildings.

In recent times, funds for daily living expenses have shrunk, and while they receive some form of support from the government and social groups, it is not sufficient and consistent, and hardly enough to provide for educational material, said Aung Din and Esther Awi Thang, the founders of Immanuel Shelter. It has been a daily challenge to feed and school the 50 children (aged several months to over 18 years old) under their care daily since they received the vision from God to start an orphanage 15 years ago, but they have no regrets. As a matter of fact, Aung himself grew up an orphan.

(On a side note: the mission team bought a Yamaha keyboard for them without knowing that the couple had been praying for one with the exact brand for two whole years.)

Spurred by the needs he witnessed, Tay embarked on a fundraising campaign toward the end of last year. Over the next few months, he collected over S$6,400 from various private donors. (See box)

On March 16 this year, Tay travelled to Yangon again to present the funds to five orphanages, including Shalom Orphanage and Immanuel Shelter. He also took up the challenge of sharing several sermons with the children at the shelters.

“This time round, I came back alone so I would have more time to interact with the kids and interview them,” said Tay. “The most important question I asked every child interviewed was, ‘What is your dream?’ I find this the single most important question because I want the donors to know how their money helps keep these children fed and educated, and how it helps them reach for their dreams. I also want the members to know that there are children in other parts the world with lots of needs, but they also have big dreams too. While life is comfortable here, please don’t forget that there are others out there who need our help. Jesus said, ‘Feed my sheep, help the poor’. Poor as they may be, these children are precious to Him too. So let’s not make them ‘Out of sight, out of mind’.”

You can see see Tay’s interviews with the Myanmese children and photos here. Tay admitted that this first amount will not be enough to solve the orphanage problem. “There’s no end to need or lack when it comes to charity, but what we can do is to buy them some time, buy them a lifeline,” he said.

To ensure sustainability in the young lives they have sown into, the shelters receive support via Lian, who in turn works closely with Myanmar Vision International, a registered charity in Myanmar. The organization provides the children with skills training and medical support, to equip the current generation of children to earn their livelihood when they come of age—and eventually break out of the cycle of poverty.

Interested donors can still make a one-time donation, or commit to giving S$35 a month, which keeps one orphan in school and adequately fed for a month. All monies raised will go directly to funding the monthly expenses of as many children from Immanuel Shelter and Shalom Orphanage as possible.

To find out how you can play a part, contact Eugene Tay at humansofchc@gmail.com 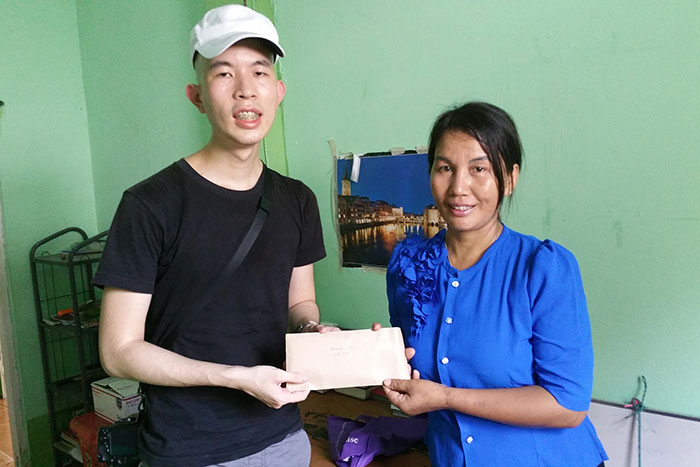 Eugene Tay shares honestly about the difficulties and also the serendipity when it came to raising funds for the Myanmar orphans.

There were challenges soliciting for funding. I was motivated to do so because, frankly, it was hard to look at the living conditions of the children. But every bright-eyed good-natured individual who first sets out to raise funds for his or her charitable cause believes from the start that people are willing to help—in finances or in effort. I thought this would be so, especially since I was appealing mostly to Christians. But alas the truth is not so.

I started the campaign appealing to followers of Humans of CHC both on Facebook and IG with the intention to raise S$10,000 on charity fundraiser site Generosity. I consulted Cindy Koh, my cell group leader who is experienced in charity work. She raised concerns that the targeted figure might be hard to achieve. I went ahead anyway. For two weeks, I barely raised S$1,000. “Discouraged” would be understating my mental state at the time.

Shortly after, I went on a backpacking trip in Vietnam. While I was there, I was contacted by a stranger who wanted to donate S$5,000. Excited but apprehensive, I was careful not to raise my hopes too high in the event that the donation fell through. But it happened. Alexandra (@electropopiscles), a friend of Cindy’s decided to pump money raised from her Christmas cardmaking initiative into the Myanmar fund.

So all of a sudden, I was more than halfway towards meeting the goal! Even though the target wasn’t met, I am very thankful to all the strangers and CHC members for their donations and for spreading the word. S$6,400 is a sizable sum in any situation, but it will do so much when placed in the hands of the orphanage owners.

Out Of The Ashes, Japanese Churches Unite