The topic of sex is the centre of this tale, explored through the lives of three men: Bo Seng (Henry Thia), his “god-brother” Jeremy (Malaysian radio DJ Jack Lim — who looks uncannily like a young Jack Neo) and Bo Seng’s son Benny (played by riveting newcomer Alex Leong).

Set in the land of tongkat ali, Bo Seng and his wife Jia Li (veteran Malaysian actress Yeo Yann Yann) are a middle-aged Malaysian married couple with a teenage son. Their marriage has settled into a humdrum pace, with Jia Li cooking and cleaning all day, and in no mood for loving. It has been three years, eight months since they were last intimate. When finally, Jia Li caves and invites him to bed, Bo Seng finds he has erectile dysfunction. Their mutual frustration and broken-down communication drives Jia Li to unwittingly engage a gigolo (an uproarious cameo by Mark Lee) and Bo Seng to pick up a teenage girl who proceeds to blackmail him for underage sex. (An ode to a political sex scandal, perhaps?)

Jeremy, meanwhile, rubs his Casanova lifestyle in Bo Seng’s face, maintaining multiple mobiles to keep up with his bottomless pool of women. Jeremy has a problem sticking to one — till he meets Benny’s teacher Miss Wong (Cheryl Lee), who holds him at arm’s length, and becomes the playboy’s big challenge. But can he really resist Pussycat, the online vixen?

Neo tackles what is possibly the toughest subject in his 11-year career — but who better to talk about what everyone is really talking about than the Everyman’s Filmmaker? Neo admirably captures the many aspects of the conundrum of modern day sex, from sexual dysfunction to teen sex, from men keeping mistresses to online trysts. The audience finds itself laughing — then thinking, because a lot of it hits home.

When Jia Li asks Bo Seng in a heartbreaking scene, “If there is no sex, does that mean there is no love?”, the viewer is forced to ponder that question.

But trust Neo to then proceed to answer it for you — and the answer is, of course not! When Jennifer accidentally falls off a building, Benny proves his love by being by her bedside and helping to nurse her to health. Jeremy’s final fling turns out to be a nightmare, turning him into a changed man who proposes to Ms Wong. Bo Seng, who has to pay off the extortionist who threatens to go to the police about him allegedly having sex with a minor, breaks down and cries when Jia Li silently hands him her life savings and jewellery to bail him out. Now that’s love. 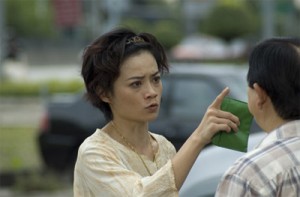 Beautifully shot in mostly Kuala Lumpur, Love Matters is a modern morality tale played out by great actors both sides of the Causeway. Henry Thia and Yeo Yann Yann powerfully capture the emotional dance that is marriage. Alex Leong, who plays Benny, proves immensely watchable, with millions of emotions running through his face each time he is onscreen, from unspeakable sorrow to immeasurable joy.

The NC-16 rating, while understandable given the subject matter, seems misplaced seeing that Neo obviously made this movie, in part, to bring out into the open the rampant practice of teenage sex in our countries. It’s a shame parents won’t be able to use this movie as a platform to talk to their 14-16 year olds about the dangers of unprotected teen sex, beyond the possibility that one’s booty might appear on YouTube.

Still, for the rest of us 16 and above, this movie is a must-watch. It may be bursting at the seams with laughs but when you walk away, you’ll find yourself thinking about the true meaning of love, marriage and sex for a long time.