Indonesia celebrates its 77 years of independence today (17 August) but for City Harvest Church’s Indonesian Service, the celebration began two weekends ago . On 6 Aug, the congregation gathered at Singapore Botanic Gardens for a day of sun and games. One participant Priscilla Tamara, 26, told City News that the gathering celebrated Indonesian Independence Day in a customary manner. “We had traditional games and competitions that are usually played in Indonesia during this yearly celebration, such as a keropok eating competition and tug of war. The day was completed with a potluck to show our kampong spirit. Many of them brought different Indonesian traditional snacks to share,” she said.

To end the day, the participants enjoyed a hearty meal of nasi kuning, provided by the church.

Priscilla also shared that her cell group had lots of fun that day, but the highlight of the day was watching the little ones in the keropok-eating competition. “They were so cute and tried their best to eat as fast as they could,” she mused. Another participant, Jason Tanuwijaya, 25, also had a good time at the event. “Seeing and interacting with Pastor Aries (Zulkarnain, CHC’s executive pastor) at such a celebration was fun. Spending time with people I rarely get to meet was fun too.”

Jason loved the fact that many participants brought along snacks to share. “It really showed the generosity of the Indonesian Service congregation,” he said. 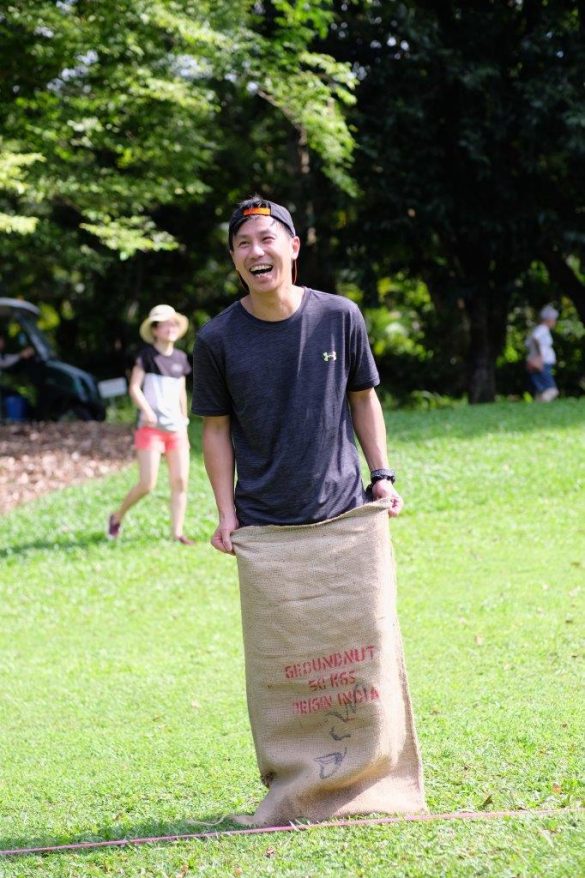 For James Hadimaja, 25, the day was one of nostalgia. “Everyone was so friendly, and they gave me lots of Indonesian snacks too,” he said. “Participating in all of the games felt very nostalgic. Despite not winning in the end, I had a good laugh, and everyone had a great time. It was a memorable event.”

Last Sunday (14 Aug), the Indonesian congregation held a special Hari Kemerdekaan (Independence Day) service at Suntec Singapore. Decked out in traditional batik outfits, the Indonesians were filled with pride as they prayed over and blessed their homeland. After the service was when fellowship began: Hall 605’s hotspot featured a long table of delectable Indonesian cuisine. The members spent the rest of the day fellowshipping over their meal.