Over the past weekend, executive pastor Aries Zulkarnain taught the congregation that God’s love is eternal and boundless, even when He appears to be absent.

Building from his previous sermon, City Harvest Church’s executive pastor Aries Zulkarnain elaborated on Isaac and Abraham in Genesis 22 in his sermon on 9 and 10 July. He began by reiterating that the binding of Isaac was a turning point in Abraham’s life, one that brought him into a new season of receiving from Jehovah Jireh, which was far more fulfilling than getting by on his own strength. Genesis 22 is known as the “ultimate test of love”, the pastor explained. Verse 2 marks the first time the word “love” is mentioned in the Bible, and it is associated with sacrifice. Upon Abraham’s obedience, the angels intervened saying, “Do not lay a hand on the boy, do not do anything on him. Now I know that you fear God because you have not withheld from me your son, your only son.” (Gen 22:12)

Abraham’s sacrifice of his only son, Isaac became evidence of his love for God. “Faith took Abraham far, up to this point, but love was about to take him even further with God,” Pastor Aries explained.

Abraham’s belief in God caused him to leave his hometown and family to pursue the vision that God gave him, but the Lord wanted to take him further. For that to happen, it required him to have a deeper love for God. “God’s covenant does not last only for one generation—it lasts for many generations to come,” Pastor Aries declared.

Most Christians start their journey with God in faith. However, along the way, difficulties and challenges happen and they may begin to doubt God’s love. “That’s why our love for God must mature and grow deeper as we progress in our journey of faith,” Pastor Aries explained.

He likened the relationship with God to that of a marriage—a couple cannot sustain their marriage simply with the initial puppy love. Husband and wife need to make the decision to be committed to each other so that their love can grow in maturity.

Pastor Aries clarified that when God tests Abraham’s love, it is not because He is insecure and needs to be affirmed. The test of love placed Abraham in a contradictory situation that was likely to cause him to doubt God. Could he remain faithful and trust in the love of God even in the midst of doubt?

In this situation, Abraham knew that Isaac was the key to fulfilling God’s covenant and yet it appeared that God was taking Isaac away from him. The Bible records that even when Abraham did not understand the situation fully, he chose to trust and obey God (Heb 11:17-19).

Similarly, when bad things happen to Christians, it is the conviction they have of God’s love that will give them the faith to obey God. This conviction must be experienced personally. “You cannot ride on your parent’s conviction or your cell group leader’s conviction,” Pastor Aries said. “You must be convinced that God loves you despite contradicting circumstances.”

To help them understand the process of gaining this conviction, Pastor Aries brought the congregation to Mark 4, where the disciples were facing a storm on a ship. Jesus woke up from His sleep to calm the storm, then He questioned the disciples’ faith. Pastor Aries pointed out two things that the church could learn from this incidence. 1. Be convinced of God’s love even when He is silent

The issue that Jesus took with the disciples in Mark 4 was that they had no faith. The disciples were frustrated when Jesus was asleep during the storm, and they believed that He did not care for them. Pastor Aries noted that many Christians think the same way when their prayers go unanswered during a crisis.

However, he explained, the lesson that Jesus wanted His disciples to learn was that even when He was silent, He still cared for them. How does a Christian loses his faith in a crisis? When a difficult situation arises, he begins to seek an explanation from God. When he fails to get a satisfactory response, he becomes frustrated and disappointed. He eventually comes to the wrong conclusion that God does not love him. As a result, his faith is shaken and when that goes on for a sustained period, his faith will be shipwrecked.

“Don’t let disappointment lead you to a wrong conclusion!” Pastor Aries warned. “I’m here to tell you that Jesus loves you.”

He went on to point out the key issue here: God’s love is not shown through His response to a believer’s questions. The evidence of love, as seen through Genesis 22, is that God did not withhold His only son, Jesus Christ. That Father God is willing to allow Jesus to come and identify with the pain and suffering of the world is proof of God’s love. Pastor Aries encouraged the church to look at the cross instead of seeking answers, to experience salvation and healing.

He gave the illustration of a parent confiscating their child’s mobile phones during the examination preparation period. This usually causes a child to accuse his parent of not loving him, forgetting the long list of things the parent has already done for him.

“God is asking us, ‘I’ve done all these things for you. Isn’t that enough to tell you that I love you? Why do you take issue with my silence and accuse Me of not loving you?’” the pastor said.

“The cross speaks of the love of God more loudly than words. When trust and love are present, sometimes explanations are not needed,” Pastor Aries preached.

Jesus experienced silence from God on the cross. Yet He trusted that God would raise Him from the dead (Heb 11:9) so He stayed on the cross. Pastor Aries encouraged the church to follow the example of Jesus, to be convicted of God’s love for them. 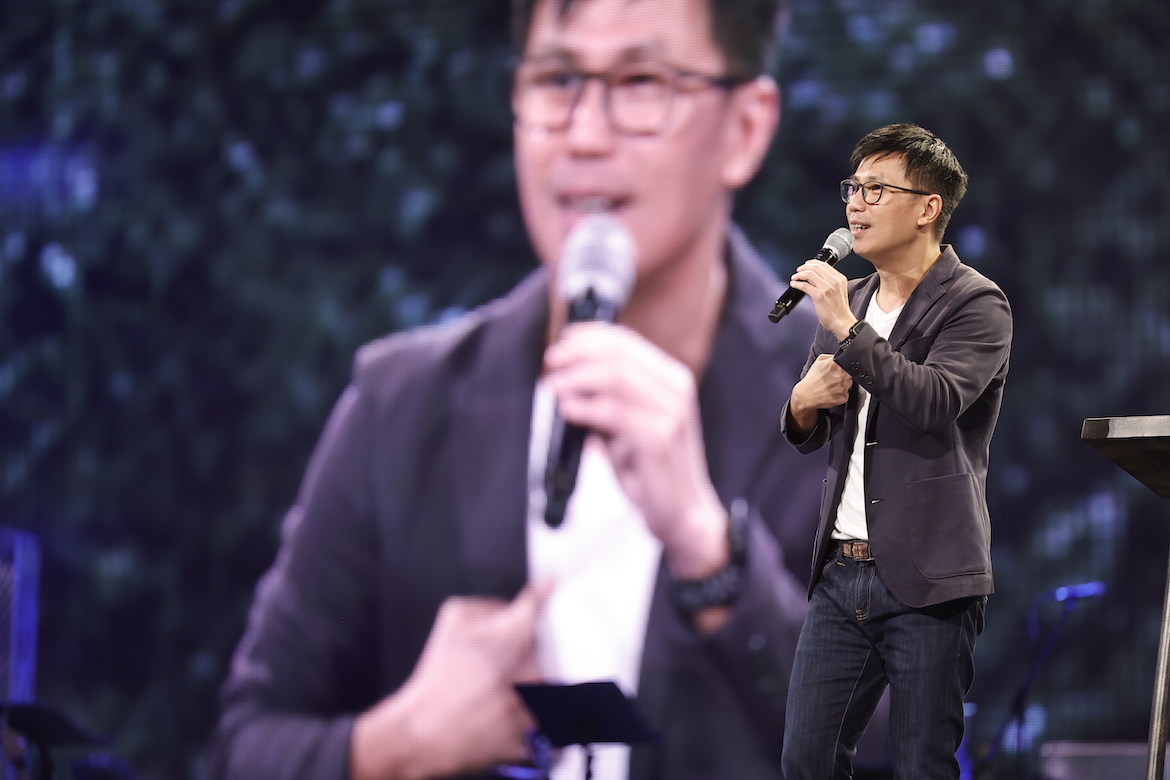 2. Be awakened to God’s love when He seems asleep

“When Jesus was asleep during the storm, His eyes were closed but His heart was always open—He was constantly aware of His disciples’ fear and struggle,” Pastor Aries proposed.

Yet understanding God’s love in the mind does not naturally translate to accepting that in the heart. The heart may still experience pain and it needs a touch from God to have closure. Hence, the understanding of faith needs to travel from the mind to the heart for faith to turn into trust.

“This is why you need to have an encounter with God,” the pastor taught. An encounter is a process that brings head knowledge to heart knowledge. “You cannot just read about it or learn about it by going to a class. You need to experience it for yourself.”

Thus, it is vital to soak in the presence of God, and to receive the touch of the Holy Spirit—that is how the hearts of the believers can be awakened to God’s love and nature. That love leads to a feeling of inner peace and trust that God is loving despite contradicting circumstances. When a believer has hope and assurance in his hearts, he will be freed from the fears of life.

“Sometimes God calms the storm on the outside, but other times, He lets the storm rage and calms His child on the inside,” Pastor Aries told the church. That is why it is important to trust God’s heart even when one cannot see His hand.

In closing, Pastor Aries shared the story of a father in Korea who only had one eye. He was very poor and had to raise his son single-handedly. His son was often ridiculed in school because of his one-eyed father and thus grew to resent him for being poor and disabled. He vowed to sever all ties with his father the moment he became successful in life.

The son grew up, left home and moved to Seoul to work . One day, the old man appeared at his office asking for him. Reminded of all the ridicule he suffered in school, the son sent his father away without acknowledging him.

A few years later, the son received news that his father had died alone. The police had found a note in his hand addressed to the son. In the note, the father talked about how happy he was to see his son so wealthy and successful. He thought that his son could not recognise him when his son drove him away. He wrote that he missed his son and yearned for him to visit. At the end of the letter, he explained that the son had gotten into an accident when he was young and lost an eye. He gave his child his eye so that he would have a normal life, and he was so proud that his son could see a new world in his place.

Pastor Aries likened this to the love that God has for him and for every believer. Jesus gave His life so that he can live a life more abundantly through His grace and presence. The pastor encouraged the church, saying that when the world is filled with evil, God will bring about a bright transformation and turn it around for good.