Chinese Service member Ng Boon Tue’s journey to salvation through cancer has inspired him to give back to his community through his famous chicken rice stall.

Lao Hung Jia Chicken Rice has held its place at Taman Jurong Market and Food Center for over 30 years. The store is run by Ng Boon Tue, 73, a member of the City Harvest Church’s Chinese Service who first started out as a chicken farmer. In the 1960s and ’70s, Mr Ng and his family reared chickens. In the ’80s, they owned a slaughterhouse and supplied fresh chicken to markets and supermarkets. When the government started automating the livestock processing, Mr Ng moved his business into a factory, but it proved unsustainable and he was forced to shut it down.

His daughter, Dorothy, a cell group leader in CHC explained the genesis of Mr Ng’s venture into the food business. “Someone introduced him to chicken rice. Given his affinity to chicken, the idea of making this dish appealed to him,” she said. He sought out an apprenticeship to learn how to make and cook chicken rice, improving on his skills as time went on. It made sense to him to start the stall. “Chicken rice is something everyone is familiar with, and it’s easy to eat,” explained Mr Ng.

With his diligent and consistent work ethic, Mr Ng developed Lao Hung Jia into a highly popular stall that is one of the main attractions of Taman Jurong Market And Food Centre—an institution for three decades and counting.

The hawker trade faces many threats of extinction, including competition from air-conditioned food courts and  the increasing difficulty of finding workers. It was on a 2016 trip to Xiamen with his wife and oldest son that Mr Ng, then concerned about this “dying trade”, caught the inspiration to not only sustain the business but make the hawker trade attractive to the next generation as a career. Instinctively knowing that the answer lay in employing technology to get ahead of competitors and allow for expansion of business, Mr Ng and his children began to make changes to the way Lao Hung Jia was run. Lao Hung Jia was one of the early adopters of digital technology, taking advantage of the Singapore government’s push to cashless payments in 2016. Starting in 2018, the stall began accepting payment through AliPay, NETS, DBS Paylah, WeChat Pay, Grab Pay and more—impressive considering that even today, many hawker stalls are still struggling with the conversion to these platforms.

That same year, the chicken rice business also embraced delivery using FoodPanda (and later, Grab Food, Deliveroo, AirAsia Food and Just Cheetah)—not as common for a hawker stall back then as it is today. Making traditional delicious chicken rice available through a mobile app ordering platform proved highly profitable as the wave of food delivery picked up in the next months and years.

Digitalising their business also meant that Lao Hung Jia could use big data to predict how much supply they would need to order for the coming weeks and months, thereby saving costs and preventing waste.

Needless to say, Lao Hung Jia was more well-positioned than most hawker stalls to survive when COVID-19 hit in 2020.

A LIFE TURNED AROUND BY CHRIST

Mr Ng’s gratitude to God is something that grew some years after he accepted Christ. Dorothy introduced him to Jesus more 10 years ago, one night after a family dispute. She led him to say the sinner’s prayer. and the first seed was sown. But when she invited him to church, he refused to go. “I didn’t give up,” she reveals. “I kept praying for him and inviting him.”

It was in 2017 that Mr Ng committed his life to God fully, when he was diagnosed with Stage Two colon cancer.

“I took the opportunity to remind my father that God was healing him and that God will mend his body,” shared Dorothy. “That was when he said he wanted to give his heart back to God.”

She told her father, “Let’s do it properly. This time round, let’s be committed.” It was then that Mr Ng decided to be water baptised and to fully commit himself to the Lord. That proved to be the most difficult yet rewarding time for the Ng family. Dorothy said, “We consulted a private doctor and scheduled my dad’s operation within two weeks. We were devastated when we heard the news, as we didn’t know what to expect or what was going on. I prayed with him and I got my cell group to pray and believe together with me for my father’s healing, confessing the Word of God.”

God moved. During the operation, the doctor discovered that Mr Ng’s cancer was Stage One, and had not progressed to Stage Two as he initially thought. That meant that Mr Ng did not need to under chemotherapy. “We thank God that he didn’t have to go through the pain,” said Dorothy.

There was the additional stress of the insurance claim. “There were also some hiccups with the insurance and we didn’t know if our claim for the surgery would be honoured,” she explained. “My father and I prayed in faith, and asked God to help us find a way to pay the bill.  Eventually, the insurer came through for us and the hospital bill was covered.”

That God moved on their behalf and brought Mr Ng the best outcome in both instances was a great faith booster for the business owner.

Soon after the operation, Mr Ng was back at work. The flexibility of running his own business allows him to take a rest whenever he needs it, and to even close the stall on days where he wanted to go to church. So he tried his best to close the stall on Sundays so that he could attend Chinese Service.

“That was difficult as my mother felt that business was good on Sundays, and because she’s not yet a believer, she couldn’t understand why he would want to do that,” Dorothy recalled. The couple reached a compromise to close the stall two Sundays in a month so that Mr Ng could attend church service. Due to the wise decisions Lao Hung Jia had made in the years leading up to the pandemic, the stall has continued to operate the last two years. But running an F&B business remains tremendously difficult, due to COVID. Still, that hasn’t stopped Mr Ng from giving back to the community.

Dorothy said, “He told me that he felt very blessed that he still can work and he still has an income. So he wanted to bless the community through his work. Right now, we give away 20 sets of chicken rice per day to the elderly and the unemployed. We made a poster to announce that anyone who needs a meal can just come to claim it.” She helped her father spread the word through social media and word of mouth.

When the pandemic hit and church services went online, keeping up his faith was a new challenge. Mr Ng did his best to tune into the livestream of the Chinese Service on weekends, and for a season when safety measures allowed, Chinese Service staff member Lu Guo Rong would visit him at his home and conduct Bible study. Every day, Mr Ng meditates on Psalm 23:1 and Psalm 27:1 daily, having them written down in Chinese on a piece of paper, and his youngest son Aaron prays with him daily.

If you live in the vicinity, or even if you don’t, you should check out Lao Hung Jia. Their rice is fragrant with just a nice amount of bite to it. Their ginger-filled chilli packs a punch, one that will have you reaching for your drink. What’s really special is the addition of preserved olive leaves to the dish, which makes a nice and salty complement. 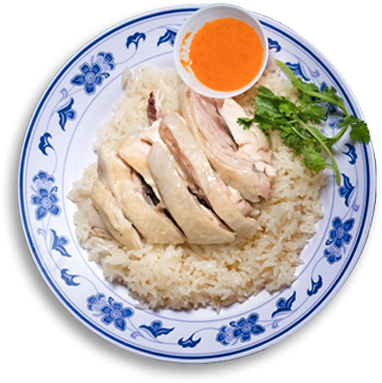 It may have taken Mr Ng just a few days to learn how to make chicken rice, but the Lao Hung Jia chicken rice you enjoy today is the result of three decades of him constantly improving his product. In recent years, he has managed to make his chicken rice healthier, yet retaining the classic chicken rice taste we all know and love. When it comes to his legendary chilli, Mr Ng insists on using only fresh ingredients in the right proportions.

A plate of chicken rice costs just $3, with your usual accoutrements of braised egg, steamed chicken gizzard or liver at only 50 cents each. Choose from steamed or roasted chicken—they are equally delicious. As a person who eats only steamed chicken rice mostly, I have to say his roasted chicken is really something special: the skin isn’t too greasy, and the meat has a nice, crisp bite to it. You can even add some sweet and tender char siew or crispy roast pork to your plate for just $1 extra.

If you’re heading there as a family of five, you can order half or a whole chicken starting at $15, accompanied by his irresistible rice at $1 per portion. If your tribe is a hungry tribe, you can also order whole slabs of char siew and roast pork starting at $40. If you can’t get enough of their chilli, take a 250ml bottle home for $10.