Some people may have never had their birthday celebrated before, while others may not have the means to do so. The Blessing Project aims to show love and care by celebrating these special occasions, and the volunteers share how they have personally been impacted through this initiative.

Picture this: the room being filled with friends and family members chatting away, brimming with excitement as they stand around the dining table, and a beautifully decorated birthday cake lit with candy-coloured candles sit on the table, alongside a pile of numerous-sized presents.

As common as such joyful sight may be to some during birthday celebrations, there are those who, for various reasons, are unable to experience such merrymaking on their birthdays. For this reason, The Blessing Project was birthed as part of this year’s Church Without Walls (CWW) initiatives. “Some dates and occasions are very important and remembering them is a way to build genuine relationships and connections,” described Catherine Lee, the pastoral supervisor overseeing the ministry.

Catherine understands this from first-hand experience when at 16, she had her very first birthday celebration at church. She vividly recalled how her cell group members sang her the birthday song,  bought her a cake and presents, and how these had all been very surreal to her then, yet heart-warming and touched her deeply. 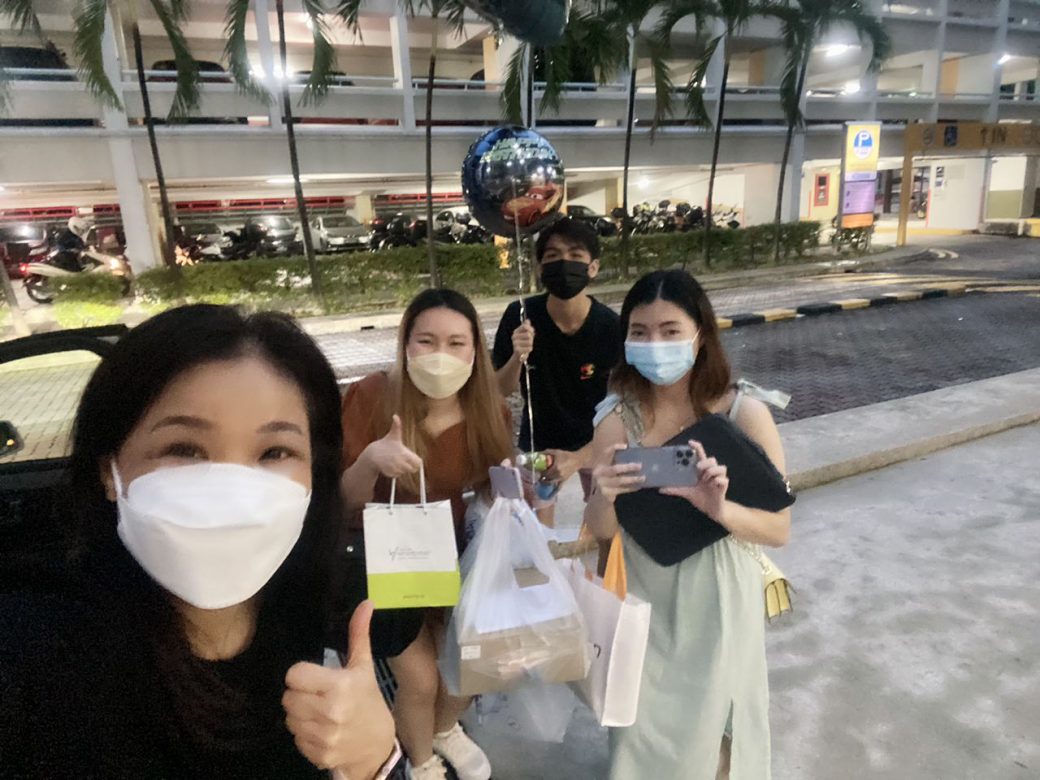 The Blessing Project volunteers preparing for the surprise.

The Blessing Project aims to show love and care to children and persons with special needs from low-income and needy families by springing them with a surprise celebration at their very own homes, complete with a birthday cake and presents. This Project involves both adult volunteers who help to collect and deliver the birthday cakes, as well as youth volunteers who with their vibrant energy and creativity, launch the surprise celebrations for all 70 intended beneficiaries this year.

NOT TOO YOUNG TO SERVE

Avner Lim, a 16-year-old student was one of those who jumped at this opportunity to serve. Given his young age, this was the only CWW initiative he could sign up for and he was determined not to pass up on the opportunity.

Catherine then placed him in a team and entrusted him with the “Celebrator” role, whose duty was to plan for the birthday celebration within a given budget, pick up the cake from the driver and carry out the celebration with one other teammate.

After some careful deliberation, Avner and his teammate decided to use the budget to purchase a remote-controlled car for the birthday boy—a Primary Two student who lives just a few blocks away from him. Seeing how ecstatic the boy was after receiving his birthday gift really delighted and impacted Avner too.

“The hardest part of the celebration was actually trying to relate to the birthday boy, other than that (I think) everything was well-organised and planned,” recalled Avner.

Shirley Chew, 21,  decided to join the Project as a volunteer as she hoped to “be a vessel to bring Christ to the people around her during this difficult period.” No matter the locations—Jurong, Boon Lay, Telok Blangah, or Katong—Shirley would rush down after work to bring joy and fun to the birthday celebrations.

As the surprises that Shirley and her teammate planned were mostly meant for primary school students aged 9 to 12, they realised that they needed to think of meaningful birthday gifts. They decided to give gifts that are both beautiful as well as purposeful for these children, such as notebooks or stationeries, rather than toys. A set of presents Shirley chose for the birthday girl.

Of all the celebrations, Shirley recounted one of her memorable ones: The duo had arrived at a young girl’s house to surprise her on her birthday, and upon repeated knocks on the door, they realised that the housing unit was empty. Shortly after, they received the sad news that the birthday girl’s grandmother had just passed on, and this cast a rather gloomy cloud over the supposed joyous occasion.

Determined to let the birthday girl receive her cake and present, Shirley and her teammate decided to leave the items outside the girl’s home. Later that night it was their turn to receive a surprise—a picture from the birthday girl’s mother, who related how happy her daughter had been to know that Shirley and her team had wanted to celebrate her birthday. That picture and message lifted up the duo’s mood, and they were thankful that their simple gesture could help make a difference to the birthday girl’s day, in spite of the unforeseen sad occasion.

Another memorable visit for Shirley was that of a 64-year-old elderly lady with special needs.

Stepping into her house, Shirley had expected a large family to occupy the sizeable residence. To her surprise, she soon realised that the elderly lady was living only with a single caretaker since her mother passed on recently.

“Hearing that made me feel emotional, but I was glad to be able to bring some cheer and joy to her. It must not be easy for the caretaker as well,” recounted Shirley.

When Shirley and her teammate presented the elderly lady with her birthday present, the lady was so overjoyed that she laughed to herself as she enthusiastically received her present. That joyful moment made the volunteers’ day and the foursome continued with the celebration and fellowship. Before they left, Shirley and her teammate reminded the elderly lady and her caretaker how God loves them, and they warmly parted.

Grateful, Shirley knew that each of these experiences had made her involvement with The Blessing Project even more meaningful and wholesome.

Remembering and celebrating special dates and occasions are important and could become valuable opportunities to connect and build genuine bonds with one another, especially with those who are in need. So let us keep spreading the joy and love of Christ beyond the four walls of the church, to remind people just how special they are, and how much they are loved!