Christmas in 2022 is a special affair. After two years of pandemic, the Christians could gather again to celebrate the birth of their Saviour, Jesus Christ. The first to hold its Christmas services in City Harvest Church this year is Jesus for All Minds service, Harvest Kidz and Dialect service. JAMS’ Christmas service at CHC’s Jurong West auditorium returned with a bang on 17 December. Jesus for All Minds is a CHC ministry that serves the intellectually disabled, and this was their first on-site Christmas Service since 2020.

The festive day started with a dynamic and outright hilarious magic show featuring Mr Egg who had everybody in stitches. The show was met with resounding cheers and the most joyous of laughter as the JAMs members thoroughly enjoyed themselves. They enthusiastically took part in the interactive parts of the show such as singing along to Christmas carols and helping to remind “Bunny”, Mr Egg’s companion, what occasion they were celebrating (Christmas, of course!).

As the service moved into a time of worship, the members brought down the presence of God. What was especially moving was how some of the children knelt down while singing, and as they started calling out to Jesus, their raw voices filled the auditorium, saturating it with the presence of God.

Pastor Lily Yong, who oversees the JAMs service, preached a simple but powerful message, telling her congregation that Jesus is the best gift one could receive for Christmas. She asked the JAMs members if they liked receiving gifts such as soft toys, figurines, Apple gadgets, and socks. Each time, they would cheer loudly and respond enthusiastically responding to all her questions.

“Jesus is the best present we could ever receive! Jesus is God’s gift for you and me,” preached Pastor Lily. She reminded the members that although material gifts like toys and gadgets were nice to receive, Christmas is about the good news of Jesus’ birth.

In closing, Pastor Lily told the members about God’s unconditional and overflowing love for them. He lives on the inside of them, bringing healing, forgiveness and eternal life. “Jesus is the reason for the season!” the pastor emphasised. She then gave an altar call to the members and their caregivers who wanted to receive salvation. As the song was played, many of the attendees rushed to the front of the stage with their hands lifted high. The seating area was almost empty, as the majority of those present were standing before Pastor Lily, who led them in a salvation prayer.

As the service came to a close, in the spirit of celebrating, the members danced and sang along to “Feliz Navidad”, a classic Christmas song. It was such a joyous time for them as well as their caregivers—big smiles were seen on all their faces, and excitement buzzed in the air even after the service had ended. ‘Tis the season to celebrate indeed! Meanwhile on the same day (17 Dec), Hall 606 in Suntec Singapore was packed with children dressed in Christmas hats and dazzling costumes.

CHC’s children’s service, Harvest Kidz, held its Dazzling Christmas services over two sessions, one on 16 Dec at Jurong West’s main auditorium, and the other on 17 Dec in Suntec Singapore. The children were not the only ones contributing to the festive mood. Teachers dressed up too—some in shimmery shirts, others as elves.

The children’s service started with a time of exciting games, where the children were spilt into three groups—Super Star, Mighty Star, and Power Star. During each game, representatives from each group went on stage to complete a task. The first game required the children to stack cups on a plate as high as they could to form a Christmas tree. In the next game, the children dressed up a teacher with Christmas decorations. The whole hall held its breath when the teachers had to jump up and down to test if the decorations would fall off.

After the games come to the praise and worship led by the Harvest Kidz teachers and a choir made up of little ones. The atmosphere in the hall was electrifying as the children jumped about, belting out the familiar songs.

The Bible lesson was extra special that weekend. Teacher Anson Ang and Teacher Connie Yong put up “The Little People Skit” to tell of the birth of the Lord Jesus Christ. 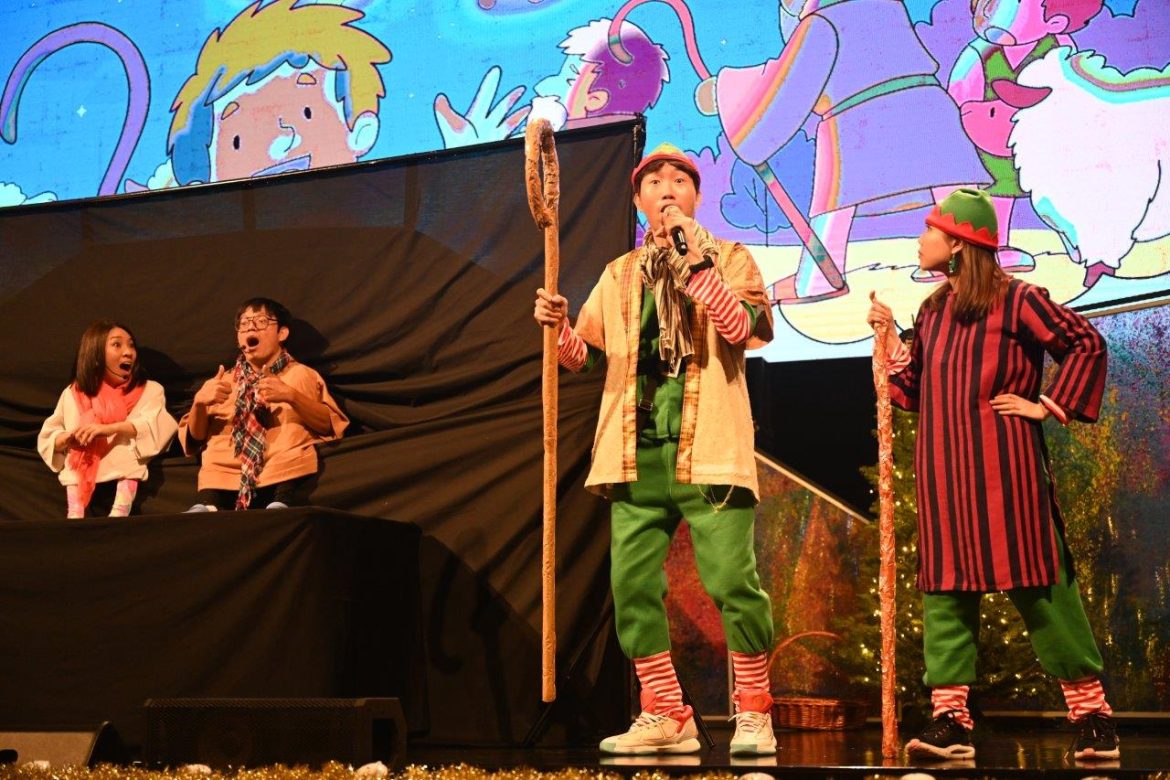 Miss Money is a businesswoman who loves money. She is friends with Mr Inn, the innkeeper, whose aim is to keep everyone in his inn happy. One day while they were sleeping, there came a knock on the door. Miss Money heard the knock but did not wake up to open the door, but Mr Inn chose to open the door to Joseph and Mary even though his inn was small. In Mr Inn’s stable, Mary gave birth to a beautiful baby boy.

“Do you know who the baby was?” Teacher Connie asked at the end of the skit. “JESUS!” the children screamed. Teacher Anson then encouraged all the children to open up their hearts and invite Jesus in.

At the end of the service, battery-operated candles were distributed to the children for the candlelight segment of the service. “I miss having Candlelight Service with the children! It was amazing and wonderful. Candlelight has always been a special part of CHC Christmas services, as well as for Harvest Kidz,” said Teacher Alicia Lim, a zone secretary in CHC. 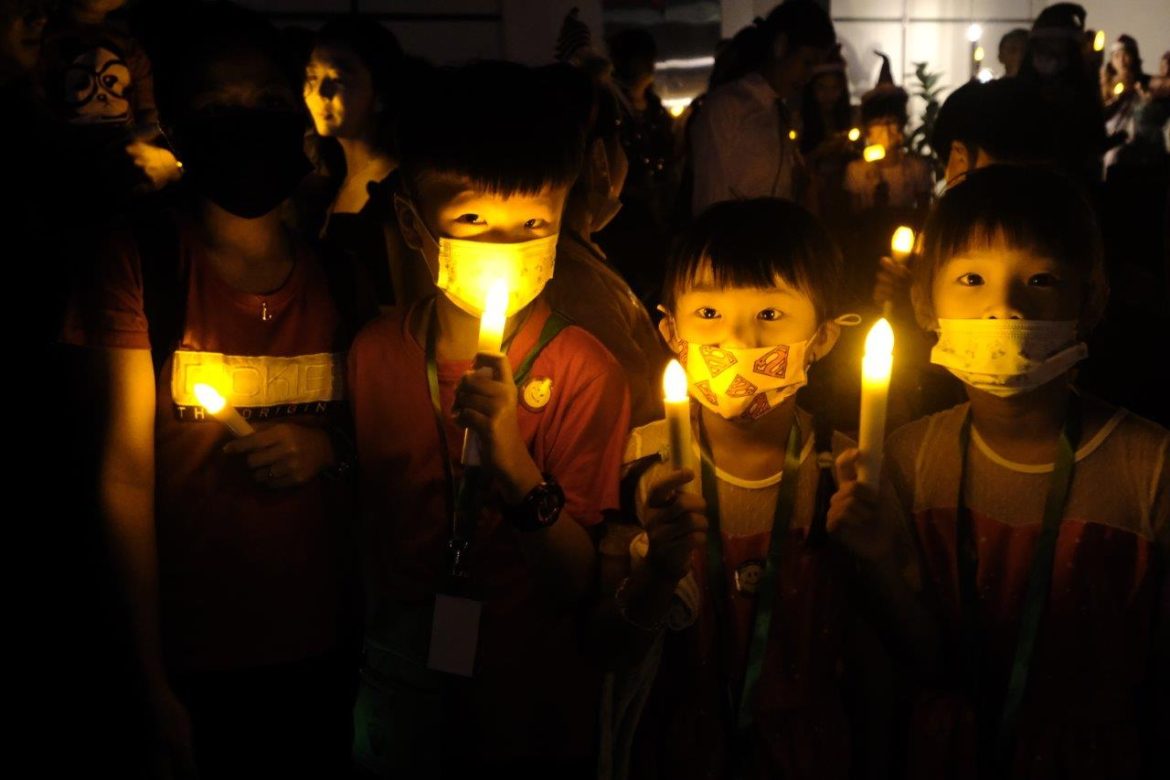 She added, “What I particularly like about the Candlelight service is when I get to see the different children initiating photo taking and conversation with their friends and even teachers. It is very important to foster friendship in church.”

Teacher Anson, a pastoral supervisor in CHC, said, “It takes teamwork to make the skit happen.” He was grateful that the children could hold candles and enjoy Christmas festivities in person after three years. While it may be physically tiring to organise and run the services, he always reminds himself to enjoy the process.

“In the Harvest Kidz team, everyone has their own strengths and we tap on each other’s strengths. That helps a lot to ease the various challenges,” said Teacher Alicia, adding that every big day involves much planning from the team. On 18 Dec, the Dialect Service team held a special gospel concert, 赐福的声音 (“The Sound Of Blessing”) for the elderly to celebrate Christmas. The elderly participants were greeted with a Christmas gift each before being ushered to their seats.

After a time of praise and worship, the audience enjoyed a performance put up by the Dialect Service volunteers. With the help of three emcees, hosting the concert in Cantonese and Hokkien, they sang songs from Dialect Service’s latest gospel album, 曙光 (Dawn); all the songs were specially composed for the Dialect Service. One of the singers, Erik Chua, 41, told City News that he had been on the praise and worship team for quite a while and thought he could try writing songs instead of just singing. The thumb drive album is available for sale at The Ink Room at $16.90.

Judging from the laughter in response to the emcees’ funny antics, and the way they listened attentively to the songs, the elderly had a great time at the concert. As they lifted their hands to worship together with the singers on stage, the presence of God filled the room. After the concert, Pastor Maria Tok, who oversees the Dialect Service, delivered a short sermon on the love of Jesus. In her sermon, she shared an analogy of an elderly person at a supermarket looking at a new item that they liked. Best of all, it was also very affordable.

Wouldn’t they spread the news of this new item to their friends and family? the pastor asked the congregation. She likened this to sharing the love of Jesus with others—wouldn’t the elderly want to share the love of Jesus, an awesome God, with their friends and family as well? When they have Jesus, their lives will be filled with light and hope. When there is Jesus, there is joy.

At the end of the service, Pastor Maria gave an altar call, and many received Jesus that day.

Christmas 2022: The Unconditional Gift Of Jesus