Bliss And Blister: Pastors Kim Hock and Lily In Sickness, In Health, In Faith

Pastor Tan Kim Hock is the Academic Dean of City Harvest’s School of Theology, while his wife Pastor Lily Yong is pastor of Jesus for All Minds (JAMS), the church’s service for the intellectually challenged. They share their journey of marriage and parenthood, through good times and bad.

Tan Kim Hock and Lily Yong were youths in CHC when the pastor over both of them, Pastor Eileen Toh, encouraged them to get together. “I had a vision that they would get married,” explains Pastor Eileen. While they were not quite each other’s “type” initially, love eventually blossomed between them. Married for 21 years, they are parents to four boys between 18 and 13.

NOT TIGER PARENTS
Pastor Kim Hock reveals that he and his wife are not the archetypal kiasu Singapore parents—they are “quite chill” about things. “It means we allow them to make mistakes,” he qualifies. “We allow them to try and to explore. We don’t put pressure on them to perform in class, even though we want them to achieve much.”

But when it comes to habits and discipline, the pastors set some ground rules for their sons. “At night their handphones must be in the living room, even for the 18-year-old,” says Pastor Kim Hock.

The pastors believe that each of their sons is created by God, and they love them for the unique individuals that they are.

Pastor Lily admits that having four boys can be quite a handful, but she enjoys the personality of each son. “My oldest boy, he’s like a grown man. Sometimes when we are sitting at the dining table, he would talk to me and share things with me,” she relates. “My second boy, he is cool as a cucumber on the outside, but he’s like a giant bear on the inside.” Their third son is a detailed young man who is “super OCD” while their fourth one is the “hands on” one, who is interested in how things work—including how to tie long hair, using his mother as a test model.

“My desire for them is to live out the destiny that God has placed in their lives, for them to know and to experience God,” says Pastor Lily. “And I tell them, ultimately, one day, when they all have their own families, they must remember that the best gift they can give to their children is to love their wives.”

Pastor Kim Hock emphasizes that it’s not important for his children to be rich and famous, but to live a good life that can be a blessing to others. “I just need them to be contributing citizens and members of the body of Christ who walk in the fear of the Lord, who live a great life and taste and see that God is good.”

In May 2017, Pastor Kim Hock was diagnosed with rectal cancer. A surgery and follow-up treatment ensued, and he was clear of the disease by the end of that year. Two small growths surfaced in late 2018 and early 2019, but both were successfully treated.

However, following three months of intensive travelling between June and August 2019, Pastor Kim Hock experienced discomfort in his liver area, and began having irregular bowels. A scan in September revealed a 5cm mass.

“I realize I did not get enough rest, and I didn’t take care of my diet,” he reflects. He was overseas on missions nearly every week in that three-month period. “The first time, I recovered fast from cancer—my body was strong, I didn’t pay much attention to my diet—that was presumption. This time, I was aware of the seriousness.”

Faced with this development, Pastor Kim Hock weighed his options: surgery, chemotherapy, radiation therapy or a combination. His doctors felt that chemotherapy was necessary first, so he underwent eight rounds of chemo in total, before following up with SBRT (stereotactic body radiation therapy), a treatment in which very high doses of radiation target the tumor precisely.

Cancer is not the biggest enemy, says Pastor Kim Hock. Fear is. “I’m allergic to fear,” he says with a smile. “If you are afraid of cancer, half the battle is already lost.” Pastor Kim Hock shared about his relapse and resuming chemotherapy on his Facebook account in early November.

In May, he completed five sessions of SBRT, and was given the all-clear following a PET scan.

But in June, Pastor Kim Hock began to experience symptoms akin to irritable bowel syndrome. This marked the worst part of the journey for him and for Pastor Lily. He found he was unable to eat and unable to sleep. Whenever he ate or drank anything, he would suffer bad cramping or runny stools. But there seemed to be nothing medically wrong with him: his colonoscopy was clear. “The doctor gave me sleeping pills, but they didn’t work,” he describes. “I would maybe sleep for two hours and I would wake up.”

The pain and discomfort were so onerous that Pastor Kim Hock lost a vast amount of weight: 15kg in a month. Unable to sleep at night, he would pace the living room floor.

“This was the hardest part of my spiritual journey,” he recalls. “When I prayed there was silence, and I wondered why. I had no desire for anything—I just wanted to go home to the Lord.”

Eventually, Pastor Kim Hock admitted himself to the hospital, where another doctor accurately diagnosed his symptoms as vascular sensitivity of the guts, and gave him a medication that successfully helped to block the pain sensors. That allowed him to sleep, and gradually, he regained some appetite as well.

“I FELT SO HELPLESS”

All these health challenges not only affected Pastor Kim Hock, but took a serious toll on Pastor Lily, mostly because there was little she could do to help her husband.

She cooked nutritious meals and did everything she could to make him as comfortable as possible, but that month when Pastor Kim Hock could not eat nor sleep was extremely trying. 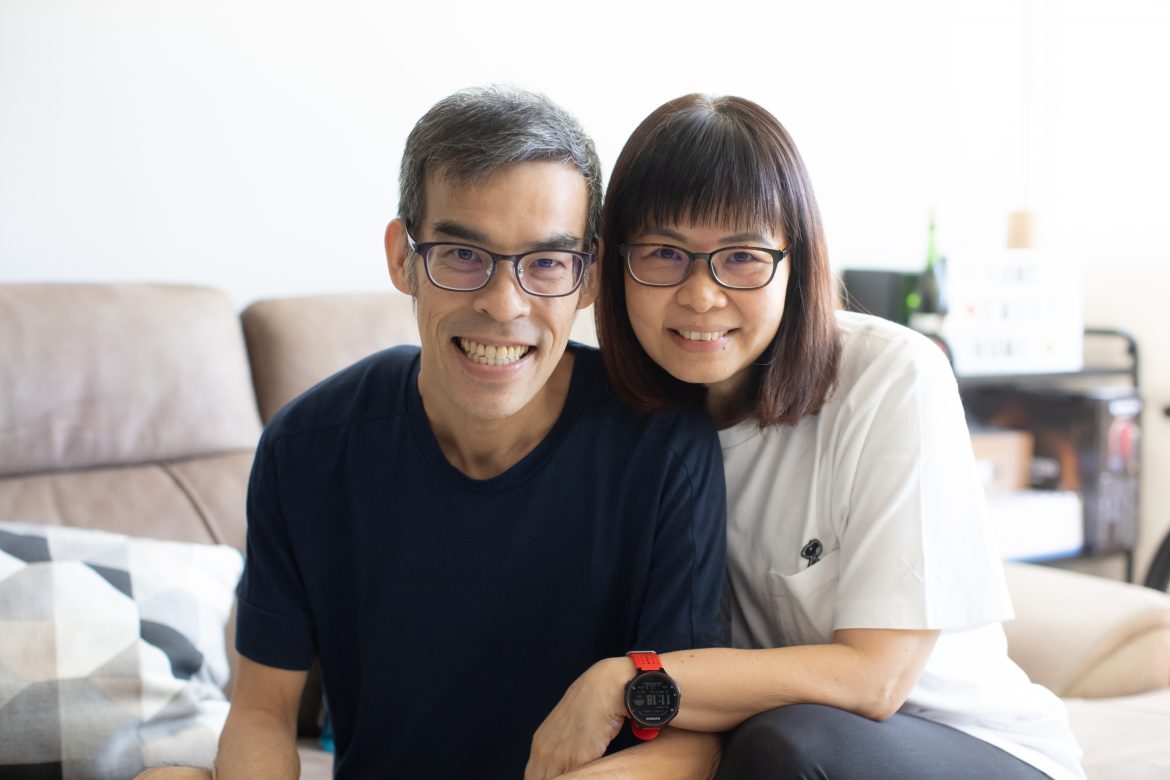 After the SBRT, Pastor Kim Hock returned to the doctor for a check up, and was told that there was a relapse of cancer. “It was hard to accept it,” admits Pastor Lily, sharing that she broke down in the car on their way home.

People may think pastors are superheroes that are constantly positive and never feel pain, but Pastor Lily states this could not be further from the truth. Pastors have their low points too.

“What went through my mind was, did we make the wrong decision not to have the surgery but to do the radiation therapy instead?” she shares. “I thought, he just finished five sessions of targeted therapy, why did this happen again?’ I asked God, ‘We trusted You, we prayed, why did You allow this to happen?’”

Yet, she said, though they are human like everyone else, she did not want her flesh to get in the way of what God was doing. “When I calmed down, I told God, ‘Whatever it is, Your kingdom come, Your will be done.’”

So she drew close to God and away from the negative thoughts, allowing Him to refresh her. These special moments happen when she exercises or goes out for a run. “That’s my Me time with God, when I can pour out my heart to Him,” she says. “I felt so helpless once that I told God, ‘Can You transfer the sickness to my body? I’m still strong, I can take it.’”

It is God that enables her to keep going, says Pastor Lily. “I cannot do without God. If you take God out of my life, I’ll die.”

LOOKING TO THE FUTURE

The children are aware of Pastor Kim Hock’s condition, and though they are quite typically “not so expressive”, the pastors are assured of their sons’ care and concern for them.

“When I came back from hospital and I could stand up straight—they had seen me bent over in pain—our youngest was so happy he came and gave me a hug,” shares Pastor Kim Hock. 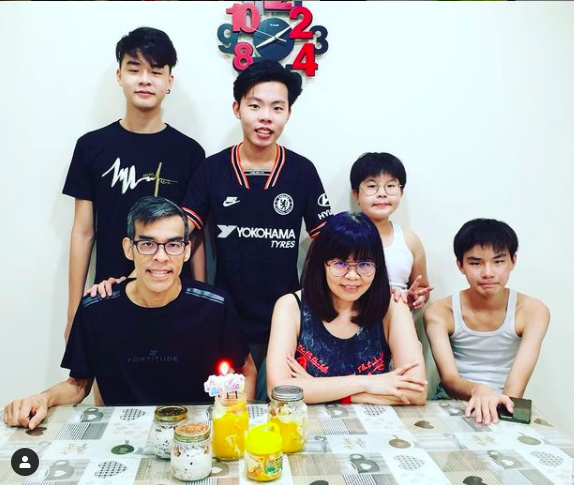 “They do know my condition, and they also see my Instagram posts,” he says, adding that he posts regular updates on social media about his ongoing experiences. “They are watching, and they are concerned, but not overwhelmed, because we talk to them, and we assure them that the situation is now under control.”

That said, the pastors have prepared their children for the eventuality of death. “We are their parents, we are older so it’s likely we will go before they do, not because of cancer,” points out Pastor Kim Hock. “So I tell them, what I want to teach you all now is responsibility and accountability. They understand; they’re sensible boys. So they’re not overly worried. We always nag them, so if we don’t nag them, that’s when they will worry!”

“They are concerned, but they believe that God will heal,” says Pastor Lily, adding that the boys are always ready to help around the house and with groceries if she cannot manage.

In an interview with City News in 2018, the pastors shared that they enjoyed taking trips alone to Taiwan, to spend couple time and to reconnect and recharge. Though COVID has brought a stop to that, it hasn’t stopped them planning.

In the meantime, their couple time comprises nightly massages for Pastor Kim Hock by Pastor Lily. “I love my wife because every night she will massage my back to ease my cramps. I enjoy the physical touch. Whether I need it or not, that’s a separate matter!” he laughs.

Chemotherapy has resumed for Pastor Kim Hock, and the family continues to live out their lives and their faith. “If it’s time to go, it’s time to go. If it’s not, nobody can take it away from you, and that’s my conviction,” he says. “Our part is to keep doing what we are supposed to do: keep on having hope, having faith, having love, regardless of the circumstances.” 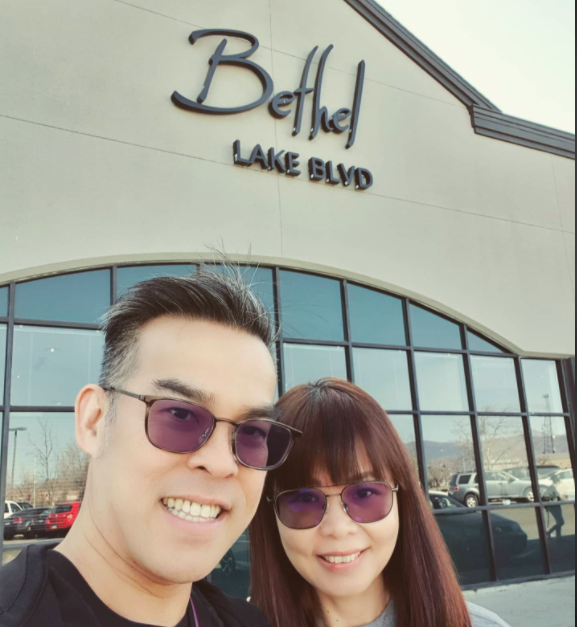 Pastor Kim Hock and Pastor Lily at Bethel Church in Redding, California at the start of 2020