Teo Poh Heng, or “Brother Poh” follows in a line of worship leaders in the early days of the church, the first being Pastor Kong Hee. To Poh, worship has a distinct purpose: to change lives by drawing people to God. The songs he has written—“Church Without Walls”, “Remember Us”, “Miracle”—have resonated with congregations beyond CHC. He shares his journey with CHC over the last 30 years and explains how to cultivate and grow one’s gift unto the Lord. 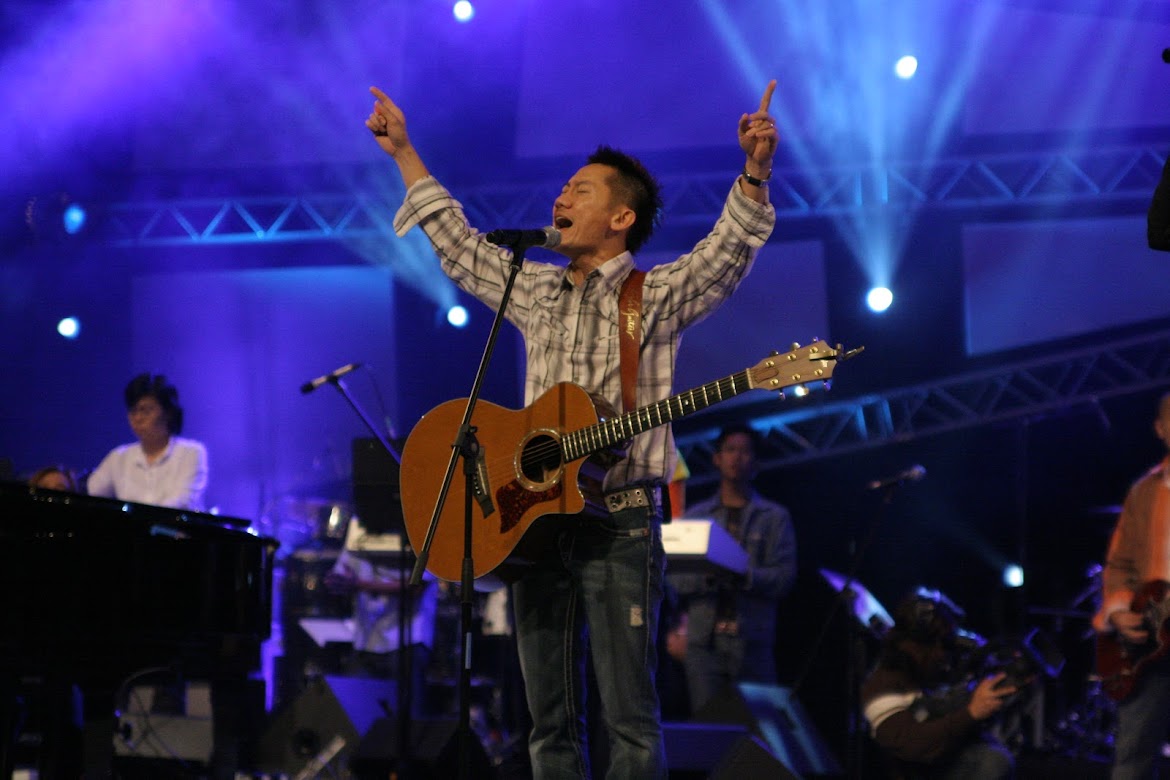 Poh in the earlier days of CHC

HOW I CAME TO CHC

I was in secondary school when a classmate invited me to CHC. I was naughty—I would ask him to meet me at a particular place to go to church but I would never turn up. But this classmate was so persistent. One day he called me and said, “I’m waiting downstairs at your void deck.” This time I could not escape. So I came to church because of his persistent love.

The first time I came to church, I was very touched by the presence of God. I went home and thought, “This is something I’ve never felt before.” So the second time my friend invited me to church, I went. I wasn’t interested in the sermon, but the preacher gave an altar call after that. He said, “You know, Jesus is like durian. The more you taste of it, the better He is.” When he said durian—because I love durian—I woke up. Then he continued, “Today, why not give Jesus a chance, and also give yourself a chance to taste and see that the Lord is good?” So I went forward and got prayed for. From then on, I feel the peace of God. That’s why I chose to keep coming to church.

I was the first to accept Jesus Christ in my family. But my dad could not accept my new found faith. To him, Christianity is a Western religion and I should stick to my Chinese roots.  Many times outside my house at 2am or 3am, I would find myself being locked out of the house. I would call my leaders and they always said, “Stay, stay. They’ll soften their hearts. Don’t walk away. Persist.” Many times at 3am, with tears in my eyes, I would say, “God where are you?”

God is a miracle-working God! He heard and answered my prayers. Within 10 years, all my family members accepted Christ. The last one was my dad—he was very hard to convince—but when he saw the change in us, he could not deny there is a God. I never thought that my father would ever accept Jesus, but with God, all things are possible!

THE GIFTS OF WORD AND WORSHIP

I believe the Word of God is the number one gift God has given the world. I also believe music and worship are His number two gifts. Why? Even the world is using the power of music to bring peace, joy, healing, hope. If we use music coupled with the power of God, it changes lives. First, God gave the Word, then He asked the angels to worship Him. From Day One, from Genesis to Revelation, it has always been about the power of praise and worship and how it overcomes—the Word of God is a weapon; praise and worship is also a weapon.

Back in the late ‘80s, when CHC was still a 70-person cell group called Ekklesia, Pastor Kong was the first worship leader. He was very strict about who he put up as a song leader. He was the only one, he did everything: praise, worship, offering, preaching. Sometimes, I would pray and ask God to let Pastor go on mission trips so that I could have the opportunity to lead worship! That was the wrong attitude! (laughs) God had to put me on the shelf for one and a half years—I would do sound and tune the guitar for Pastor before he came out to song lead before cell group. God knew I needed to be molded and changed. After that time, Pastor said, “I think now you’re ready.” I started playing the guitar in meetings, then slowly, Sun encouraged me to sing.

There have been a few special encounters with God during worship. At one cell group meeting I was leading, we had five newcomers. In the midst of worship, they began to tear up, and God said, “Give an altar call”. I wasn’t sure at first, but the voice came a second, and a third time, so I gave the altar call. All five of them raised their hands. That day there was no preaching, just worship. I explained to them after that why they teared, that they sensed His presence, that it was God touching them. That night I couldn’t sleep. I prayed to God, I said, like Moses said, “God show me Your glory!” I realized that night that that’s the power of encounters, praise and worship. 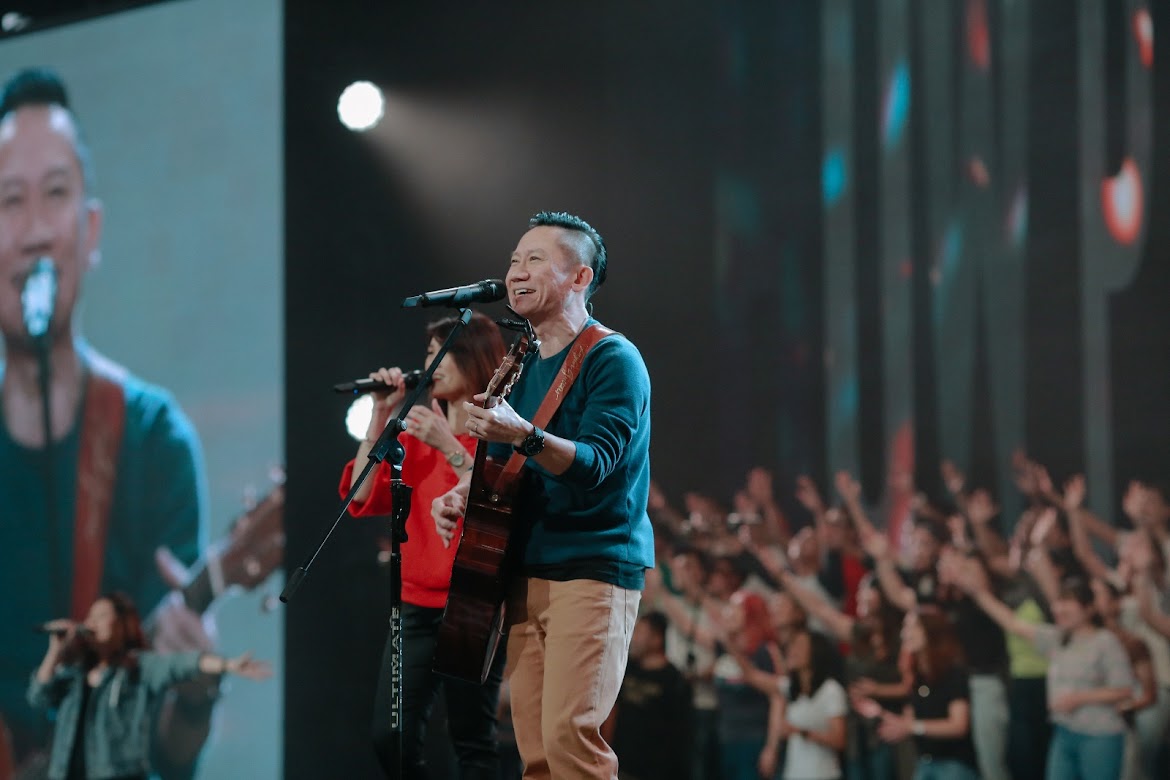 Recently we had a meeting for our affiliate churches in The Harvest Network. As I drove to the meeting, I asked God, “How would you like me to encourage your pastors?” He said, “Later when you are winding down your song, I want you to get all the pastors to hold hands and look around. And I want you to encourage them by saying, ‘If you want to do a revival, we are going to do it together.’ I want them to look around and remember that God has not forgotten them. They are not alone; CHC is with them.’ So I spoke the exact words God gave me, and after that, I said, “At the count of three, I want you to give God a big shout.” And the whole atmosphere exploded with praise. Later, after the meeting, Sun told me, “At that moment, when you said that, something broke in the atmosphere—the rest of the meeting had such ease.”

“Miracle” was a song that was birthed forth to encourage our church to trust in the Lord in our toughest season. It has since blessed many others, like Pastor Eileen who uses this song a lot during her healing ministry sessions, praying for people who cannot conceive.

In 2016 Fukuoka Harvest Church wanted to collaborate on an album with us. We tried a few songs and “Miracle” worked well. Shortly after we recorded it, there was an earthquake in Japan. They brought this album back to Japan, and it became like an anthem: they kept singing in their church and everybody was very encouraged. A secular singer in Japan asked to cover it as a song for the nation. Our Japanese translator Naomi asked me “Was this song written for the Japanese?” I said, “No, it’s to encourage our church.” She replied, “Every word when it’s translated into Japanese—it’s for us in Japan.”

One day when Pastor Bob preached at service and we sang “Miracle” after the sermon, he turned to me and said, “This song is so Bible-based!” I was so encouraged by what he said because I think everybody needs encouragement: song leaders, musicians, everybody. Even for me, I need a greater miracle to keep writing new songs and use the gift that God has given me to be a further blessing in His kingdom.

A HEART FOR THE PIONEERS OF THE CHURCH

Caleb was 85 when he said, “God, give me this mountain.” He did not allow his age to deter him from fulfilling God’s purpose in his life. Like Caleb, we as pioneers of CHC must also believe God can still use us to fulfil his purpose.

The youth have strength, but what we can give to them is the ability, the wisdom, the encounters that we have; we can still be a part of what God is doing in CHC.

Personally, I have a heart for all the members who started with us—the Lord has not forgotten our sacrifices we have made to him in our younger days. My prayer is that all of us will continue to have encounters with God through worship. Encounters give us the strength and ability; they revive us, push us to do more for the kingdom of God.

Never despise the days of humble beginnings. The gifts and the calling of God are irrevocable. Let’s glorify God with the gifts, talents, and abilities that He has given to us and fulfill the God-given purpose in our lives!

The Heart Of Obedience “Behind Closed Doors”