The Art Of Kintsugi: Aries Zulkarnain 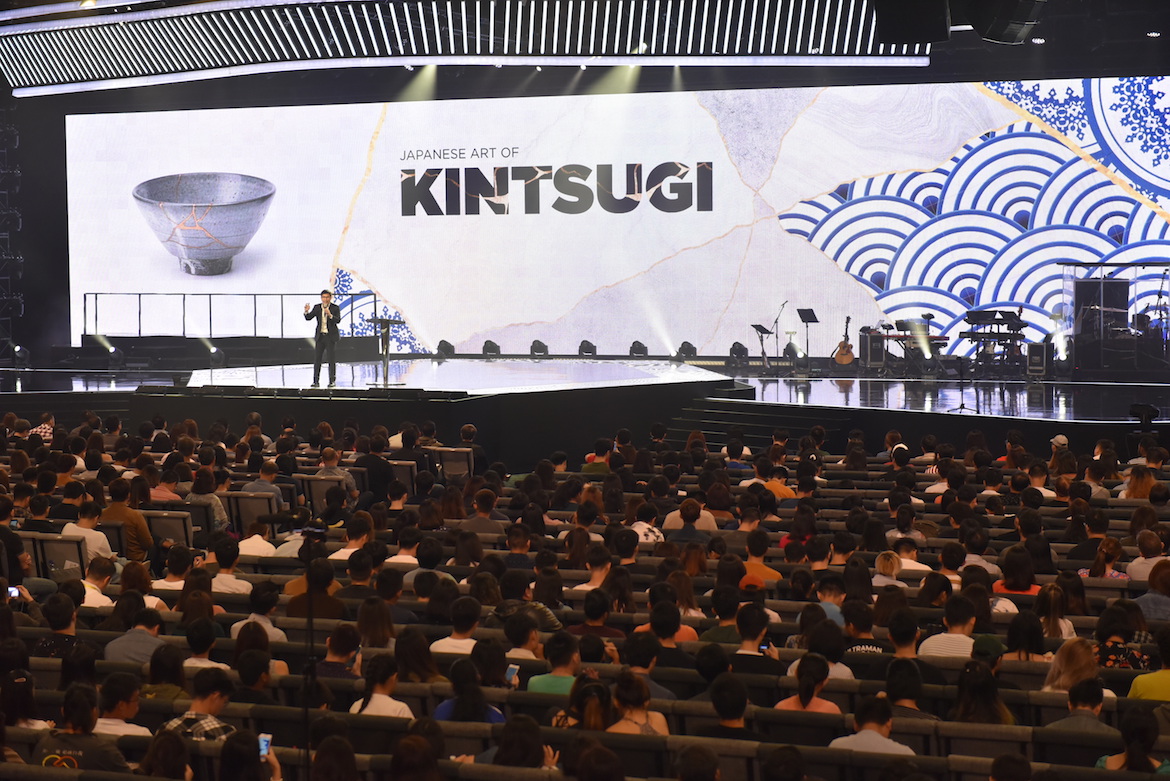 “The art of kintsugi teaches us that broken objects are not something to hide but to be displayed with pride,” he explained. The gold lacquer used to glue the broken pieces together highlights the imperfection, making the pottery more refined and more valuable. In the same way, God is the gold lacquer that holds a person’s broken life together to make it even more refined and valuable.

Pastor Aries was preaching over the weekend of Oct 5 and 6, a week before the church’s 30th anniversary celebrations. Referencing Isaiah 64:8, he preached that God is the Potter and believers are the clay; as the Potter, God has every right to reshape His people, mold them and even break them if He feels that the vessel is not turning out according to his desired design.

However, many believers give up in the midst of the brokenness and crisis God has allowed them to go through because they do not understand the purpose of the pain. “Stay in the process,” advised Pastor Aries. “God cannot honor His promise, if you do not honor His process.”

He added, “Don’t be demoralised when you go through a crisis, because God knows what He’s doing and He has not left your side.”

THE STORY OF SIMON PETER

John 1:42 recorded the first time Jesus met Simon and gave him the nickname Peter, which means “solid rock”. “Every time God gives you a name, He is making his intentions clear: ‘I am going to transform you into the person I have called you to be’,” Pastor Aries explained.

“Interestingly, every time Simon did something wrong or behaved like a double-minded man, Jesus would call him Simon. It was like a signal to tell him that he was behaving life his old self,” Pastor Aries noted. “But every time he expressed bold and courageous behaviour, Jesus would call him Peter, as if to commend him for acting the way he should.”

Pastor Aries went on to give examples of Jesus calling him Simon before rebuking him. It was possible that things could have come to a point where Simon Peter cringed when Jesus called him Simon, knowing that a correction was coming.

“Magnify God’s greatness, but never exaggerate God’s goodness,” the pastor advised. “Because God’s word can speak to you truly, but not attractively. God speaks to you and shows you the areas you need to change.”

ALL CHANGE COMES THROUGH A CRISIS

However, Simon Peter did not change after the encounters He had with Jesus. “We think that we would change when our encounters are at their deepest, but instead, all change comes through a crisis,” said Pastor Aries. “Change comes when we learn the value of brokenness.”

Simon did not turn into a Peter. “Maybe it’s not about transformation from a Simon to a Peter,” the pastor said. “Maybe the goal was to make him a Simon Peter.”

Christians sometimes think that their ultimate goal is to reach a point where they no longer have struggles or weaknesses. The preacher pointed out that that’s not realistic because this world is imperfect—as long as believers live in it, they will have weaknesses. “Jesus wanted Peter to be someone who could embrace his weaknesses, his past and his shame, but at the same time continue to live out his Godly potential to the fullness,” noted Pastor Aries.

While the word “transformation” is often used to describe change, the Bible uses it interchangeably with the word “transfiguration”. It means a complete change in form or appearance into a more beautiful or spiritual state. One example of transfiguration was found in Matthew 17:1 and 2 when Jesus transfigured before Peter, James and John.

“Jesus showed them that the only way His divine glory will shine through His earthly body was for it to be broken on the Cross,” explained the pastor.

In the end, Jesus restored Simon Peter in John 21:15-17 by calling him “Simon”—not to admonish him, but to command him to “feed my lambs”.

“He wanted Peter to remember and embrace his own brokenness and human identity,” said Pastor Aries, “but He was also telling him that even when he is weak, Jesus will still call him to do the work of a Peter.”

In conclusion, Pastor Aries encouraged the church by telling them that God repairs His broken pottery with gold lacquer in order to highlight the imperfections. “God knows what he is doing—and He has not left us,” he assured.

Quinton Lim, 23, a recent SOT graduate told City News, “Going through many seasons of ups and downs throughout the different phases of my life, there were many times when I felt that I was not good enough; but God was always there to sustain me. The purpose of kintsugi really reminded me that though our situation may not always be favorable, ultimately God always has a plan for us. As Pastor Aries said, our failures do not define us, they refine us.”