In Luke 5, four men broke the ceiling to bring their paraplegic friend to Jesus Christ, impressing Him with their bold belief. Pastor Aries Zulkarnain preaches that as the church looks to break new grounds, it is important to understand the purpose behind the action and maintain one’s conviction in Jesus.

The road ahead will never get easier, but the church should become stronger, said the executive pastor of City Harvest Church, Aries Zulkarnain as he opened his message on the weekend of Aug 17 and 18. Picking up from his sermon two months ago, he reminded the congregation that God wants to do something new in their midst, and staying in a state of prayer will help them discern the new from what is merely novelty or nostalgia. 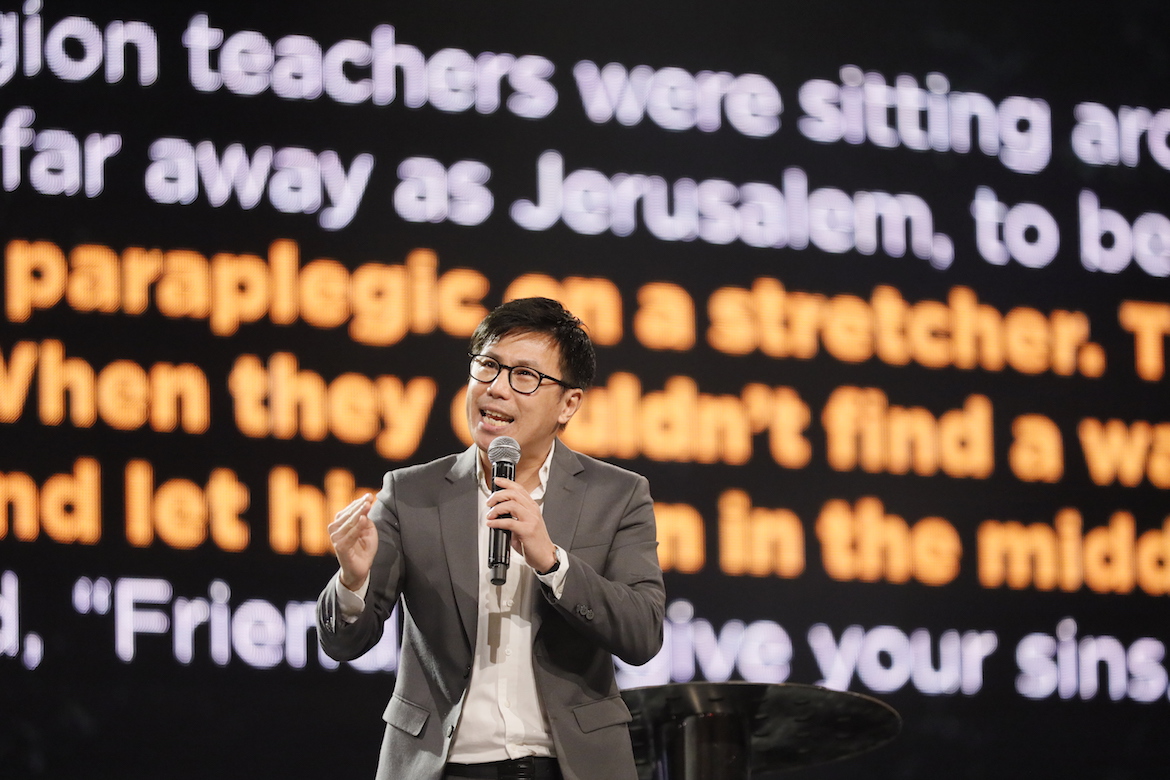 Pastor Aries directed the congregation to Luke 5:17-20, in which four men tried to bring their paraplegic friend to Jesus. When they could not find a way into the jam-packed house, they went up on the roof, removed the tiles and lowered their friend down to where Jesus was. The Bible records that Jesus was impressed by their bold belief.

“This story tells us that ceilings are meant to be broken,” said Pastor Aries. “Every barrier that is stopping people from coming to Jesus needs to be broken.”

A ceiling describes a limitation or barrier that hinders a person from progressing higher. It can come in the form of a fixed mindset or an old tradition. The Holy Spirit wants to lead people into new levels, said Pastor Aries, but they must be willing to renew their minds and yield to Him

“We must open our eyes to see, because eyes have not seen and ears have not heard what God has in store for the people who truly believe in Him,” declared Pastor Aries, quoting from 1 Corinthians 2:9.

“The floor that you are standing on today is a previous ceiling our leaders shattered yesterday,” he pointed out, adding that before believers go about breaking ceilings, they must first establish two things.

UNDERSTAND THE PURPOSE BEHIND AN ACTION

“Our primary reason for breaking ceilings is so that Jesus can remain accessible to the evolving needs of society,” Pastor Aries explained.

It is important to first establish the purpose behind breaking new grounds, so that the church can enjoy sustainable evangelism and growth. When CHC started 30 years ago, its senior pastor Kong Hee broke through the “ceiling” of what church must be like. CHC created a concert-like setting, which drew in many youths. At that time, being “cool” had helped it to grow, but that is not the case today.

“What’s needed now are leaders, churches that are willing to go into the secret place of the most high God, and receive revelation from on high,” preached Pastor Aries. “We need to be willing to pray and dig deep, so that we can continue to adapt, and reach people who are increasingly resistant to the Gospel.”

In Luke 5, Jesus told a parable about old and new wineskins: new wine must be poured into new wineskins, for pouring into old wineskins will cause them to burst. Similarly, the methods used yesterday may not be relevant today.

There is a need for the church to change its mindset, said the pastor. Churches need to ask God to open their eyes, so that they will not be stuck in current, or even past victories. Once they are clear about the mission, they can invest in the mission rather than the method, and then they will see people come to Jesus.

“The secret of longevity is the art of managing continuity and change,” Pastor Aries said. This requires the congregation to pray and go deep into the presence of God, until He speaks to them. “When God shows you His heart, you don’t need any method because the heart of God will go all the way to touch this generation.”

A person who has experienced the heartbeat of God will possess the compassion to reach out and meet the current needs of society, regardless of the cost, hindrance or barrier. That person will be willing to overcome all obstacles so long as people continue to come to Jesus.

BE CONVICTED IN THE ONE WHO SAVES

In the Bible, the disciples fretted over how they could get enough bread to feed the crowd of 5,000 men, but forgot that the Bread of Life was standing right in front of them. Eventually, Jesus turned the little into much.

“The main essence of the Gospel does not teach us how to get salvation, but Who can give us salvation,” Pastor Aries reminded the people.

When a person is looking at the how-to, he is looking at his limitations, the pastor explained. But once he shifts his focus to Jesus—the One who can bring the miracles and revivals—he will know that whatever is in his hands is enough. 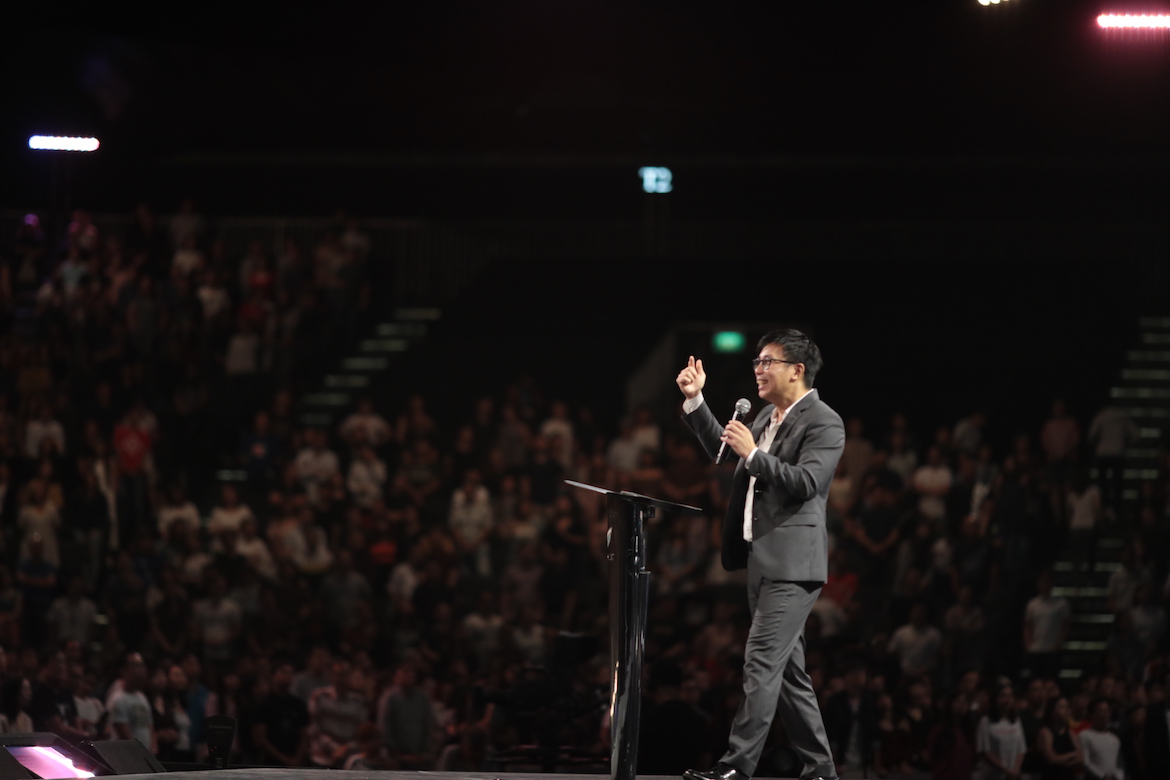 “Many churches have become so cool that they have turned cold towards Christ,” said Pastor Aries, going on to explain that some of these churches now shun the Holy Spirit and speaking in tongues, forgetting that it is the Spirit that draws people to Jesus.

“We need more substance,” he emphasized. “We need Jesus in our lives and our church. Because gadgets and fashion come and go, but the substance of Jesus will always draw people to Him.”

Instead of technology, what this generation of people want is to experience the real deal: the power and revelation of the Holy Spirit. This is why there is a need to grow the substance of Jesus in our services, cell groups, Bible study and prayer meetings—the church needs to lift Jesus up.

The pastor warned that lures of the world and culture are increasingly prevalent. Unless a person has conviction in Christ, he will easily conform to the standards of the world. He may eventually think that it is acceptable to worship God as well as Mammon, and that it’s all right to bend the truth to suit himself.

“But Truth is Truth,” declared Pastor Aries. “Jesus is the Truth, the Way and the Life.”

Reading Daniel 3, the pastor noted that King Nebuchadnezzar did not prohibit Shadrach, Meshach and Abednego from worshipping Jehovah. Instead, he said that on top of worshipping Jehovah, they had to bow down to the Babylonian culture and worship his gods.

The challenge of the church today is not that young people do not believe in God, but they do not believe in God only, as the First Commandment dictates. They want to define God in their own terms, preference and experience. Yet, before a person can impact the culture, he first needs to be grounded in God and His word, or culture will easily influence him instead.

The response of the three young Hebrew boys is a lesson that Christians can learn today. Pastor Aries taught that in the face of immense pressure, Shadrach, Meshach and Abednego responded with conviction instead of confrontation. They replied the king in Daniel 3:17-18, “If that is  the case, our God whom we serve is able to deliver us from the burning fiery furnace, and He will deliver us from your hand, O king. But if not, let it be known to you, O king, that we do not serve your gods, nor will we worship the gold image which you have set up.”

“Confrontation is never the solution, but conviction is,” the pastor said. “Why were they able to say that? Because their faith was firmly rooted in the Person of God rather than the miracles He can do for them.”

Out of that conviction flowed their trust in God.

“You need to build your conviction, you need to build your trust in God, and that your trust must be rooted to the person of God,” explained Pastor Aries. “Even if God doesn’t save you from the fire, you must know that you still do not bow down to the culture, and you’re willing to go through the fire, and ultimately God will rescue you from the fire.”

“You will survive, you will go through it, but more importantly, you will gain the respect of the people around you,” he continued. Nebuchadnezzar eventually admitted the power of God and decreed people from saying anything against Jehovah, or punishment awaited them.

Pastor Aries cited a study conducted by Barna Group that showed churches that focus on entertainment instead of presenting the whole Gospel are driving millennials and Generation Z away. The study showed that 67 percent of millennials surveyed also preferred a classic church to a trendy one.

“Classic” is not old, but timeless. Pastor Aries names literary classics such as To Kill A Mockingbird and Macbeth as examples of works that continue to speak to people. The substance of Jesus Christ is the classic and timeless message that will keep speaking to the hearts of humanity. 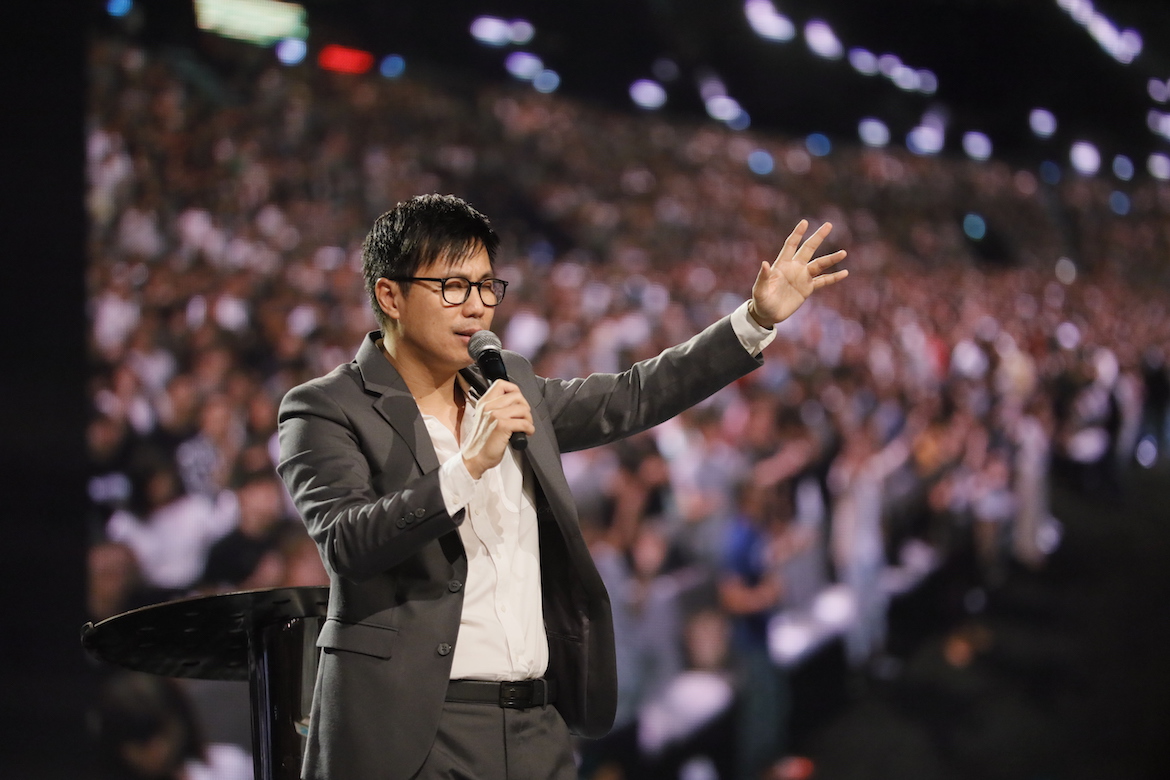 One of the primary purposes of the church is to be the light of the world. When the world gets darker, in values and cultural degradation, the pastor pointed out, the church must be able to shine its light, holding on to its conviction, and uphold Biblical truths and morality.

In closing, Pastor Aries led the people in a prayer to grow and strengthen their conviction that Jesus Christ is their Lord and Saviour.

Lai Ming Rui, 25, a student at NUS, said, “I recently came across a quote by C S Lewis, about how faith is the art of holding on to things our reason has once accepted, in spite of changing moods. Today’s sermon really resonated with me, as too often we compromise on our faith to conform to culture, but Jesus has called us to be in the world but not of the world. I pray that despite changing moods and evolving cultural norms, our conviction will be rooted in the person of Jesus.”