“Jesus often withdrew to lonely places to pray,” said Pastor Aries, executive pastor of CHC. “When we pray and we devote our time to God, God wants to enlarge our capacity, so that you and I can love again when we feel that we cannot love anymore.” 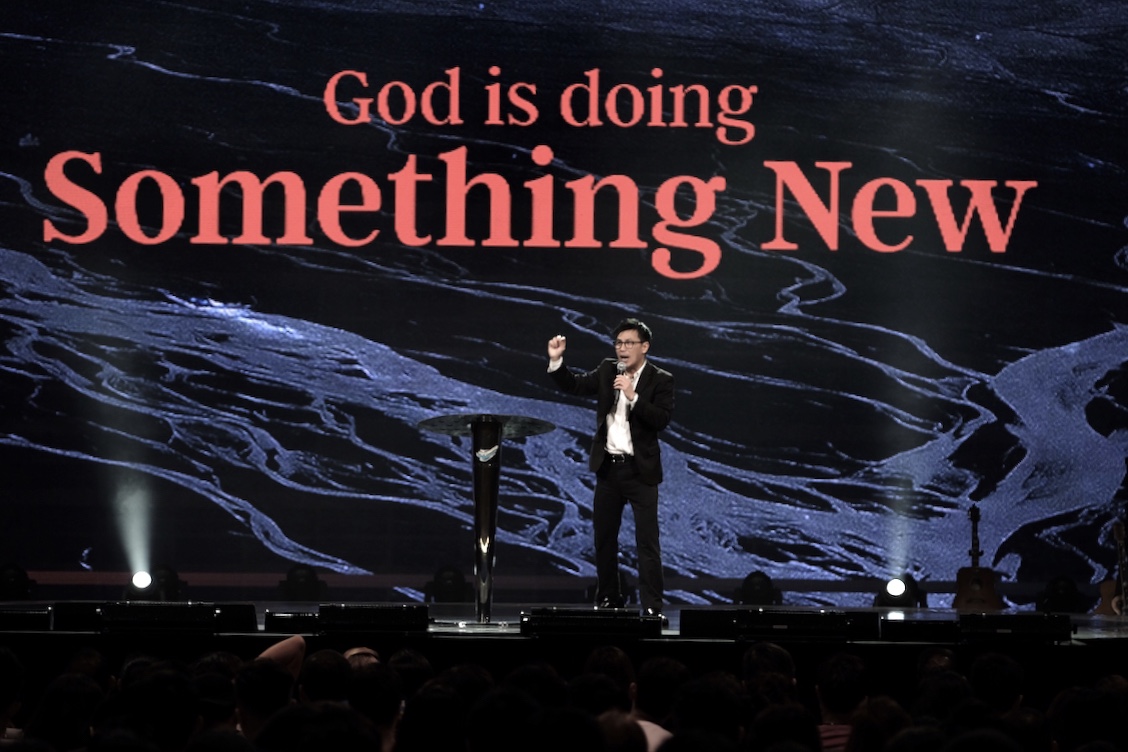 The month of June is like the halftime in a match. It is the school break and many take the opportunity to  go on a holiday. It is important to rest, said executive pastor of City Harvest Church, Aries Zulkarnain, but it is also important to pray and seek God during the holidays, to ensure that one has long-lasting momentum.

Opening his sermon on the weekend of June 8 and 9, Pastor Aries directed the congregation to 3 John 2, which reads, “Beloved, I pray that you may prosper in all things and be in health, just as your soul prospers.” When one’s soul is weary, no amount of sleep can help—only the infusion of the life of God can help one’s soul to prosper.

The authors of the Gospels often described Jesus going to a lonely place to pray, especially after ministering to the multitudes (Matthew 14:23; John 6:15). In Luke 5, Jesus withdrew Himself to pray after healing a man with leprosy.

“This is unusual in our culture—we party, not pray, after a big event,” the pastor said, drawing laughter from the congregation. But there is something to learn from Jesus’ actions, he added.

“Don’t wait for a crisis to happen in order for you to stop and rest and pray,” said Pastor Aries. “Be intentional in your prayer life while you are having a good momentum.” In John 6:14-15, the multitudes had recognized Jesus as the Messiah, and that was when He had the most momentum. But instead of riding on that and continuing to minister, He stopped to pray. Momentum did not dictate Jesus’ devotion to His Father—the opposite was true.

VICTORY CAN BE DECEIVING
A person tends to pray the most when he is disappointed in life. However, prayer is also important in times of success. Pastor Aries cautioned that many people may see victory as a sign of approval from God, but without stopping to pray and spend time in devotion, success can create a faith that makes God seem unnecessary.

The congregation was reminded not to be dependent on victories to prove that God is aligned with them, and to take this June holidays as an opportunity to withdraw from the busyness of success and pray. 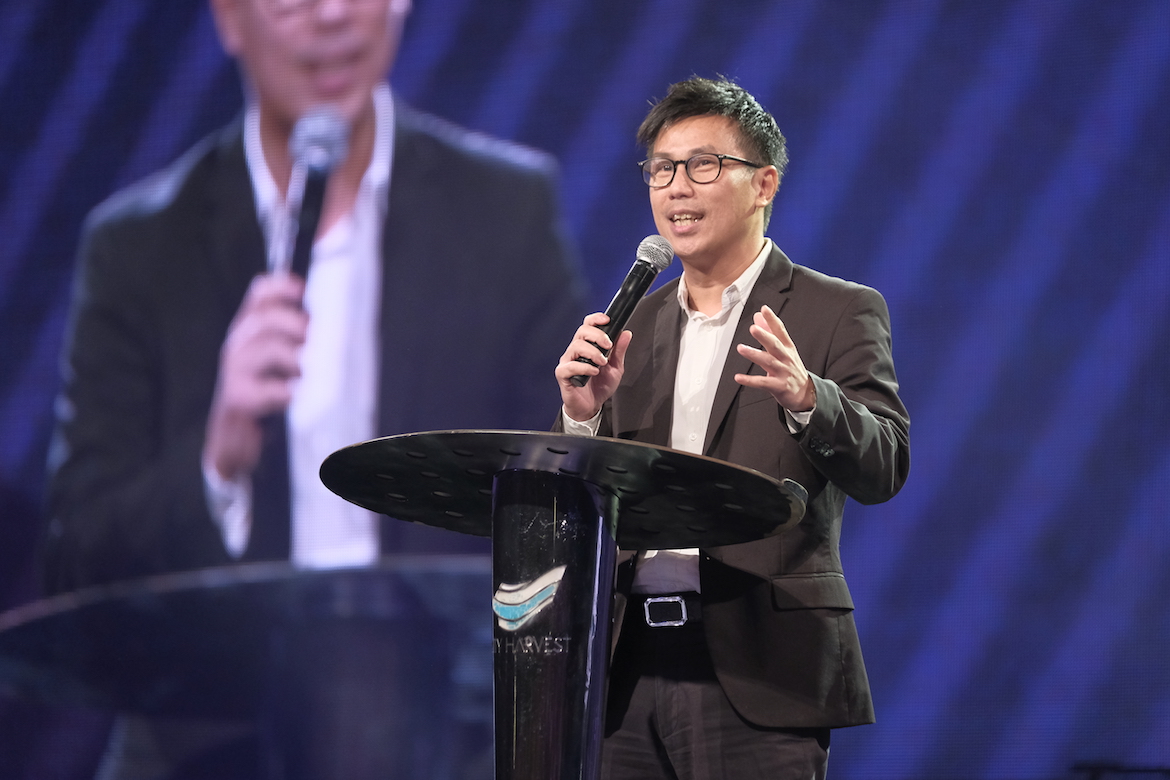 THE KEY TO ENLARGING CAPACITY
In Luke 5, a leper came to Jesus and asked if He was willing to heal him. Why would he ask that? Why would Jesus not be willing to heal? Pastor Aries then drew parallels to his own pastoral journey, and candidly shared that sometimes, after a full day of ministering to church members, he would bump into someone else who needs counseling. While his spirit says, “I am willing”, sometimes his body does not share the same sentiment.

Likewise, after Jesus ministered to the leper, He asked him to tell no one–He probably wanted to set aside time to pray and did not want the crowd to come to Him, Pastor Aries imagined.

“It’s not that Jesus needed to increase His power to heal,” said the preacher. Jesus is fully God and His anointing does not fluctuate. However, as fully man, His body suffers fatigue.

When someone is overwhelmed, a small issue can become a heavy burden. These small issues can accumulate and cause the person to call it quits after reaching the “boiling point”. Often, people burn out in their jobs not because they have run out of capability, but because their heart has no more capacity to attend to another issue, problem or request.

“That’s why Jesus often withdrew to lonely places to pray,” Pastor Aries said. “When we pray and we devote our time to God, God wants to enlarge our capacity, so that you and I can love again when we feel that we cannot love anymore.”

Jesus made prayer a lifestyle, and that gave Him the ability to handle any problem in the world. In Luke 23, Jesus was at the point of His death, yet He still had room in His heart to attend to a need–to save the soul of the thief hanging next to Him, and to ensure that His mother was taken care of by John.

Pastor Aries reminded the congregation that anointing will continue flowing as long as one’s heart is ready to contain the anointing. However, the anointing will stop when there is no more room in a person’s heart. Quoting Philippians 4:13, Pastor Aries preached that when one’s capacity is enlarged, he can handle future problems ahead because he can do all things through Christ who strengthens him.

GOD WANTS TO DO SOMETHING NEW
“The danger is that the more we experience success, the more dependent we are on continual success to feel validated,” Pastor Aries pointed out. He added that when success does not come again, one may feel the pressure to achieve it again, causing frustration and burn-out.

Novelty and nostalgia are two things that are dangerous to progress. The former makes one lose his or her identity in the name of change or being current, while the latter causes one to fail to see what needs to be changed when it is no longer relevant.

In Isaiah 43, God said, “Behold, I will do a new thing”. When people are trapped in nostalgia, they fail to notice the new things that God is doing in their lives. For example, they might see a problem where God wants to give them purpose; they might see an obstacle where God is giving them an opportunity.

How to differentiate what is the new from novelty and nostalgia? According to Pastor Aries, the antidote is prayer, for it causes one’s eyes to be open to the new that God wants to leave in his or her life.

“God is doing something new in our midst,” Pastor Aries declared to the congregation. “When we tune into His program, He will bring us into glory.”

In Psalm 46:10, God said, “Be still, and know that I am God”. The word “know” is the same word used in Genesis 4, “Adam knew Eve”, which describes sexual intimacy between a husband and wife. When busy, a couple is incapable of intimacy, but when they come together as one, they create a new life. Likewise, in our intimate relationship with God, He wants to birth something new.

In closing, Pastor Aries read from Luke 5 (MSG), “We’ve never seen anything like that”, for God is doing something new.

The congregation was led to say a prayer, to forget about past accomplishments and methods, and for God to open their eyes to see the new that He is doing in their lives.