The root of emotional issues in life often lies in the “orphan spirit”. The revelation of the love of Father God brings healing and restores the believer. Mike Connell dealt with both topics last weekend at City Harvest Church.

Joining City Harvest Church on the last weekend of June (June 29 and 30) was Mike Connell, senior pastor of Bay City Outreach Center in Hastings, New Zealand. Pastor Mike is no stranger to CHC: he was first invited to speak at the church in 1994 and returns every year to teach at the School of Theology, where he moves powerfully in deliverance and inner healing. 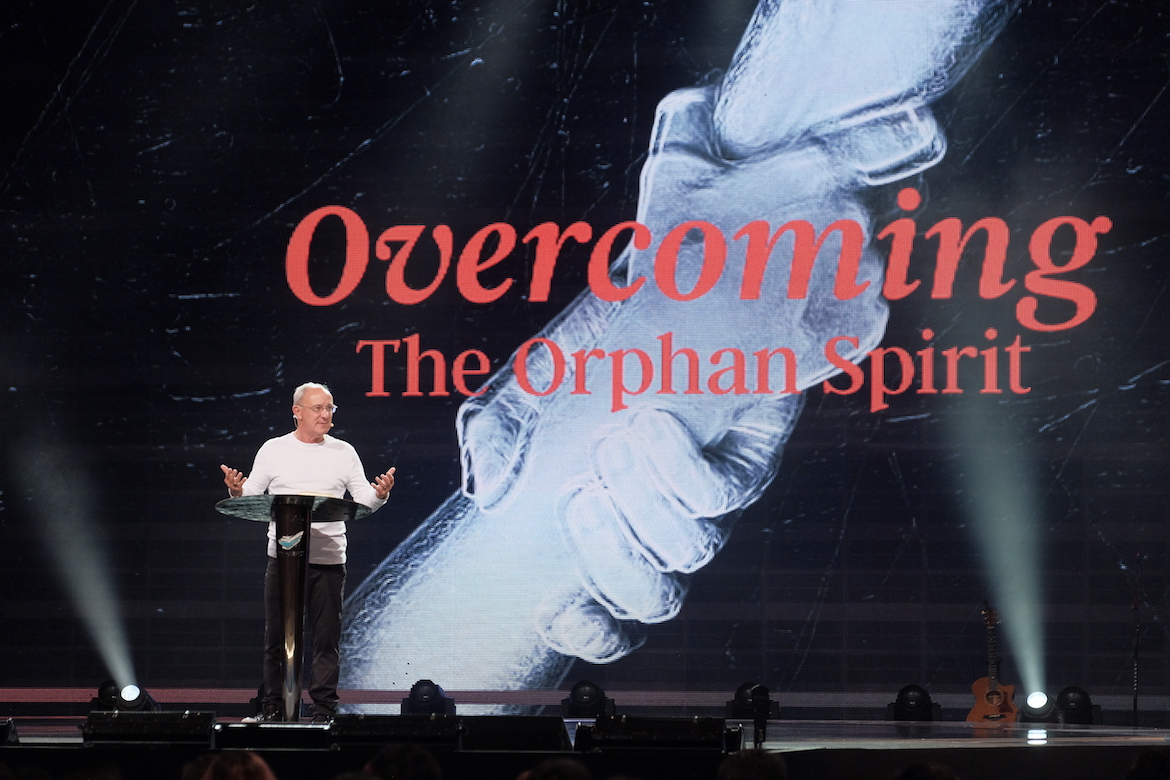 “I WILL NOT LEAVE YOU ORPHANS”
On Saturday, Pastor Mike preached a sermon on “Overcoming the Orphan Spirit”. He brought the congregation to John 14:16, reminding the congregation that once they have received the Holy Spirit, He abides in them forever. In verse 18, Jesus told the disciples that while He was going back to heaven, He “will not leave you orphans; I will come to you”.

While the world understands an orphan to be an individual with no parents, the Bible uses the term “orphan” to describe a person who lacks a father. A father is the source of identity, provision, protection, among other things—therefore if one is fatherless, one is vulnerable. The most exploited people in the Bible were the widows and orphans.

In the Bible, Jesus operated as the Son of God. Pastor Mike talked about the three responsibilities of a son. Firstly, a son needs to have a relationship with his father.

Secondly, a son has to represent his father well. Jesus came to earth to represent God, so He spoke and acted in the Father’s Name. He wants us to do the same.

“How can we represent God if we don’t know what God is like?” asked Pastor Mike. One can only represent God as accurately to the degree of revelation they have of Him; that is why having an intimate relationship with the Father is important.

Lastly, a son has an assignment from his father. Jesus said that He was sent by His Father. Sonship requires these three roles to constantly be met. Intimacy with the Father enables the son to represent the Father well and empowers him for his assignments.

“When we enter the world, we are all born spiritually empty. We all struggle to find our identity and our purpose on earth because we don’t know the Father,” explained the preacher. Orphans—children who are abandoned, rejected or abused by their parents—experience the pain of separation, disconnection and loneliness.

“God’s desire is to set us free from being orphans and to connect us back to the Source,” said Pastor Mike. “The problem with this generation is loneliness. Even with all the improved connectivity with technology, they are lonely because they lack face-to-face interaction. And they need that.”

An orphan is often highly competitive and jealous of the successes of others. He builds his identity around material things, serves with an agenda and gets upset when things do not go his way. He may also struggle with loneliness, live in constant fear and anxiety, and is desperate for others’ approval.

“How do you deal with such pain?” asked Pastor Mike. “The only way is to have the Holy Spirit enter our lives, fill the gaps and bring healing.” He reminds everyone that maturing in God is a lifelong journey. “It’s a process. No matter what level (of maturity) you’re at, there will be challenges because Jesus wants you to know that we can always depend on Him.”

Reading  Romans 8:14-17, Pastor Mike preached that Jesus gave His disciples the Holy Spirit so that they would be connected back to the Father. When they are led by the Spirit, they would not be bound by the fear of rejection and abandonment.

“People are afraid that others may leave them because they are not good enough,” he continued. “But His Spirit confirms who you are. You are not what you do, you’re not what people think or say about you, you’re who God says you are.”

God never speaks words of rejection, said Pastor Mike. “But if you’re hearing these words, someone else is saying them and it’s not God. You’re listening to it because it’s familiar to you. Self-pity, loneliness, fear, rejection can be familiar because you’ve been listening for so long, you think it’s you but it’s not.” These voices of rejection and fear are demonic, he explained.

He explained that God’s voice ministers to believers differently. But building walls to prevent pain also prevents the help God is sending. Pastor Mike encouraged the people to own up to their pain and to bring it to God.

He described, “The voice of your Father says things like ‘You’re My son that I love, I delight in you, I think about you, the thoughts I have of you are thoughts of peace and not evil, that you might have a future you look forward to.’”

He ended his message by reminding the church that the key to breaking the cycle of pain is to submit to God and receive from Him, instead of holding on to the past. It is necessary to forgive those who have hurt them, repent from making an idol out of the pain, and meditating on the goodness of the Father.

The service ended with an altar call for those who did not know Jesus, and many responded. 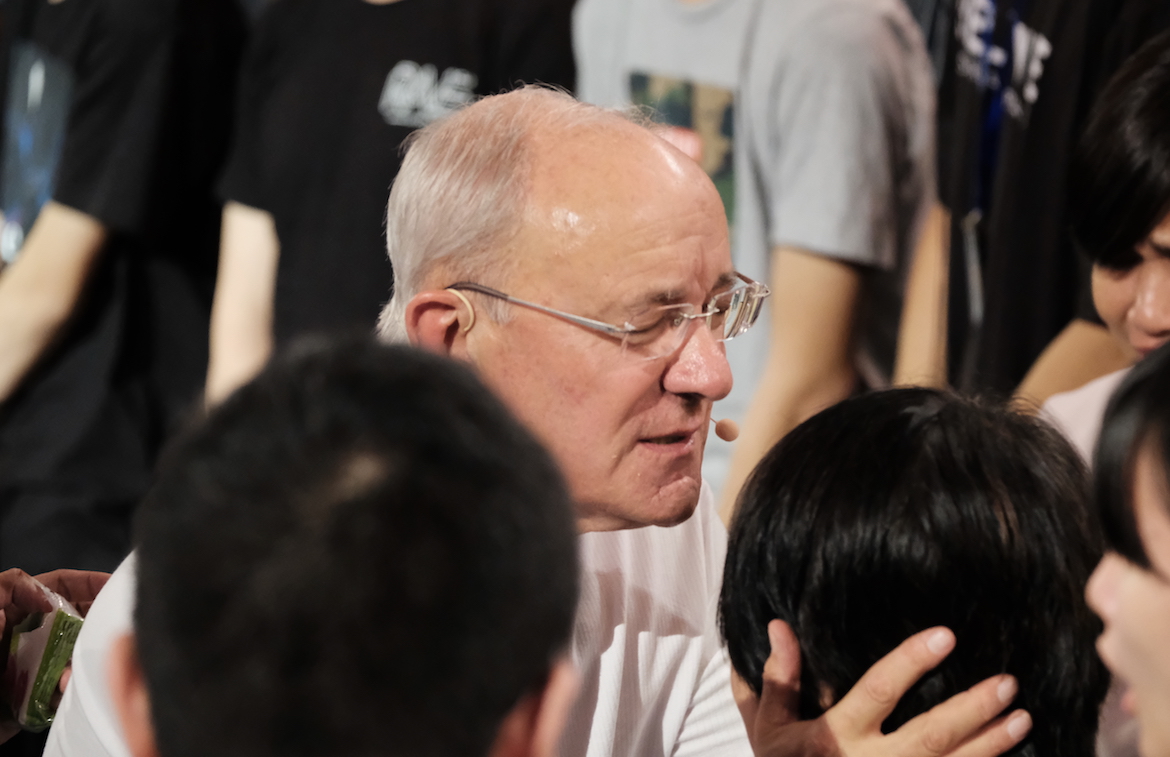 THE FATHER’S LOVE
Pastor Mike preached a different, but related, message on Sunday, on a subject that he meditates on often: experiencing the love of Father God.

He explained that Jesus came to reveal what the Israelites did not know at that time, that God is a tender, loving Father. Jesus could reveal the Father because He knows Him.

“Natural fathers often don’t represent the Father well because of their own brokenness,” Pastor Mike noted. “Many people struggle to call God, “Father” because it’s a reminder of the deep pain [from their relationship with their earthly father] that’s unresolved in the heart. How can you relate to someone if you have a distorted image of him? We need the Holy Spirit to break the misconceptions and bring breakthrough [to a person] to receive a revelation of what God is like.”

To know what God is like, one has to look deeply at how Jesus treated people, especially those who were broken. Pastor Mike noted that Jesus welcomed and honored the sinners, like the “baddies, the tax collectors”. By doing so, He wanted His disciples to understand what God is like as a Father.

The pastor reiterated Jesus’s role as the Son of God and the three roles He has as a Son. He reminded the church, “being a Christian is not coming to church every Sunday. It is to be a son, to have a relationship with God and to represent Him well.”

In John 17:26, Jesus prayed that “the love with which You loved Me may be in them”. God puts His Spirit in His children so that they can experience the love and value He has for them. “That’s what God’s plan is: to bring revelation from the inside that you’re prized and valued and nurtured by God Himself,” declared the preacher.

Reading Luke 4:18, Pastor Mike told the church that Jesus wants to heal the broken hearts of the people so that they can be free to receive His love. The pastor went on to explain what God is like from Exodus 34:6-7, which reads “And the Lord passed before him and proclaimed, ‘The Lord, the Lord God, merciful and gracious, longsuffering, and abounding in goodness and truth,  keeping mercy for thousands, forgiving iniquity and transgression and sin, by no means clearing the guilty, visiting the iniquity of the fathers upon the children and the children’s children to the third and the fourth generation.'”

“This is what God said He is like,” explained the pastor. “He says it in the Old Testament and Jesus demonstrated it in the New Testament.”

The Lord. God revealed Himself as the eternal one, the self-existing one. He is not limited by time or the physical realm. He is all powerful. All things are possible for Him.

The following attributes mentioned in the verse describes how God treats His people.

God is merciful, compassionate, tender-hearted and sensitive to the needs of others. He is concerned with the sufferings of the people in the world and He wants to help them. Jesus demonstrated this on earth. He was always moved with compassion when he sees the lost. “To be like Him, we must be tender-hearted, not judgmental,” said Pastor Mike.

God is gracious. To be gracious means to have immense resources available and to step down to empower someone, in areas of their lives that need empowerment. “God is gracious; He will step down to help you wherever you’re in need. He’s always like that, He’s not trying to punish you.”

God is longsuffering. “This means He takes a long long long long time to be angry with you.,” the pastor said. “He is incredibly patient. People think God is always angry with us, He is not.” Abounding in goodness means He is kind to people even when they do not deserve it. Truth is what Jesus preaches when He came—He is the Truth. Keeping mercy for thousands means to be kind to the multitudes. Jesus always had compassion for the multitudes even when they were crying out for His death.

God forgives iniquity, transgressions and sins. The pastor explained that sin is “I’m not like what God intended”, “transgressions” is “sinning even when I know I’m not supposed to” and “iniquity” means “there’s something twisted and crooked in me”.

“God forgives it all,” he declared.

However, God also tells Moses that He is just. Pastor Mike taught that while God is kind and merciful, He is also a God of justice. “If we won’t respond to His kindness then He’ll have us account for it eventually.”

Yet it brings God no delight to see His children suffer. In the Kingdom of God, mercy is greater than judgment, and that is why He leaves that attribute to the end of the declaration.

“He wants us to see His mercy,” said Pastor Mike. “That’s the Father we serve—He is very kind.”

At the end of the service, Pastor Mike explained three ways a believer can experience God. Firstly they must be hungry for Him. Then they need the Holy Spirit, because without the Spirit, they cannot encounter God. Lastly, they must worship Him because worship attracts the presence of God.

He gave an altar call for those who wanted to receive Jesus, and entered into a time of ministry for all who hungered for an encounter with God.