Pick Up The Stones And Rebuild Your Life: Wu Yuzhuang

On the first weekend of June, Pastor Wu Yuzhuang encouraged the church to start rebuilding the broken parts of their lives. 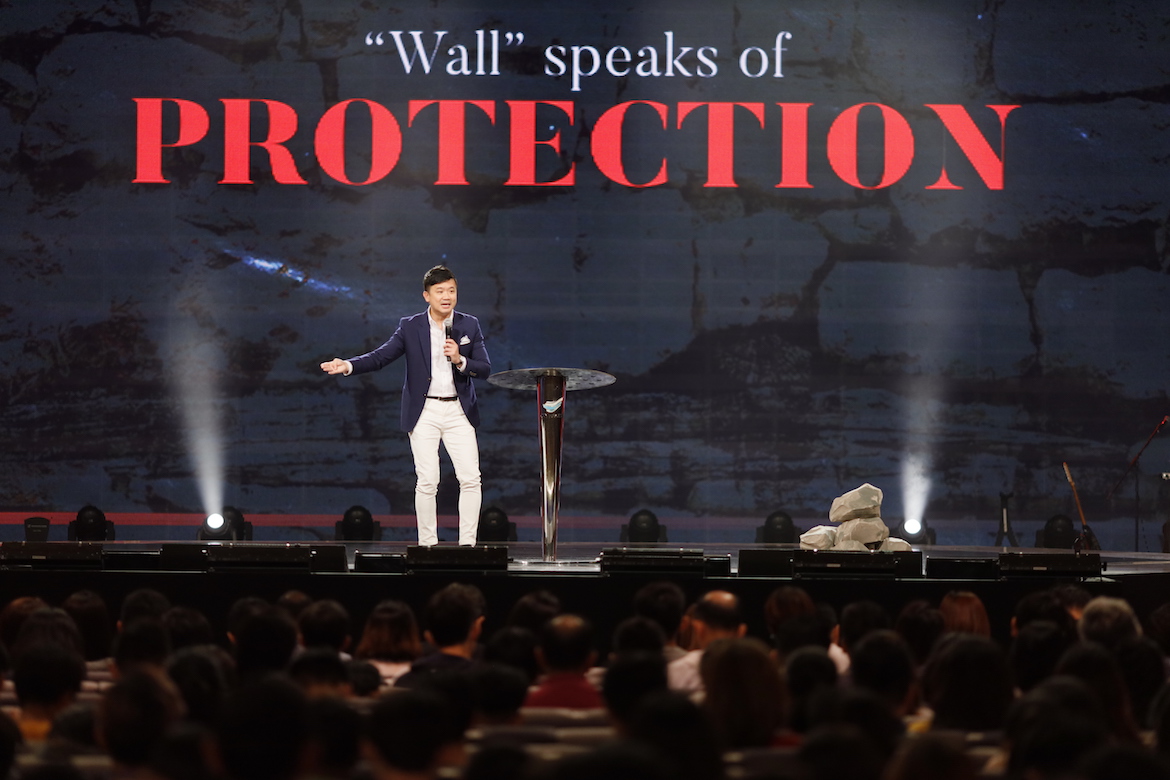 The children of Israel walked passed the stones of the wall of Jerusalem for 93 years before Nehemiah saw the need to rebuild it. Why was it that no one else felt the motivation to pick up the stones and rebuild the walls? What does it take to pick up those stones?

Over the weekend of Jun 1 and 2, City Harvest Church pastor Wu Yuzhuang drew parallels between the inertia the people of Jerusalem experienced with the reluctance many believers have in their own lives to change the status quo.

He opened his sermon with Nehemiah 1:2-4. In 586BC, the Babylonian king, Nebuchadnezzar, had broken through the wall surrounding Jerusalem, conquered the city and taken the Israelites captive. In 538 BC, they were released and Zerubbabel led the first group of people back to Jerusalem. The second group, led by Ezra, returned in 458 BC and in 445BC, Nehemiah led the final group back.

Segmenting the timeline carefully, Zhuang explained that the wall of Jerusalem was only restored in 445BC—93 years after the first Israelites returned to Jerusalem. Here, the walls speak of protection—they defend the city from enemies. The pastor postulated that the state of the wall reminded the children of Israel of their failure and defeat: the brokenness on the outside mirrored the brokenness and defeat within them. The ruins of the wall were left untouched for nearly a century. The Israelites had become used to their status as failures.

“Nehemiah wanted to do something about broken wall. He was not a builder but a cupbearer of a king, yet he didn’t allow his lack of knowledge to stop him from rebuilding the wall of Jerusalem,” said Pastor Zhuang. “We cannot ignore the stones of our lives, lying on the ground and pretend they are not there.

“What are the stones that you have allowed to lie around in your life?” he asked. “Let us pick up the stones and rebuild the wall of our life.”

These stones may represent one’s dreams, self-worth, studies, prayer life, Bible-reading, soul-winning efforts, or marriage. Those who have encountered a big, negative event in their lives may have left these “stones” as they are instead of dealing with them. 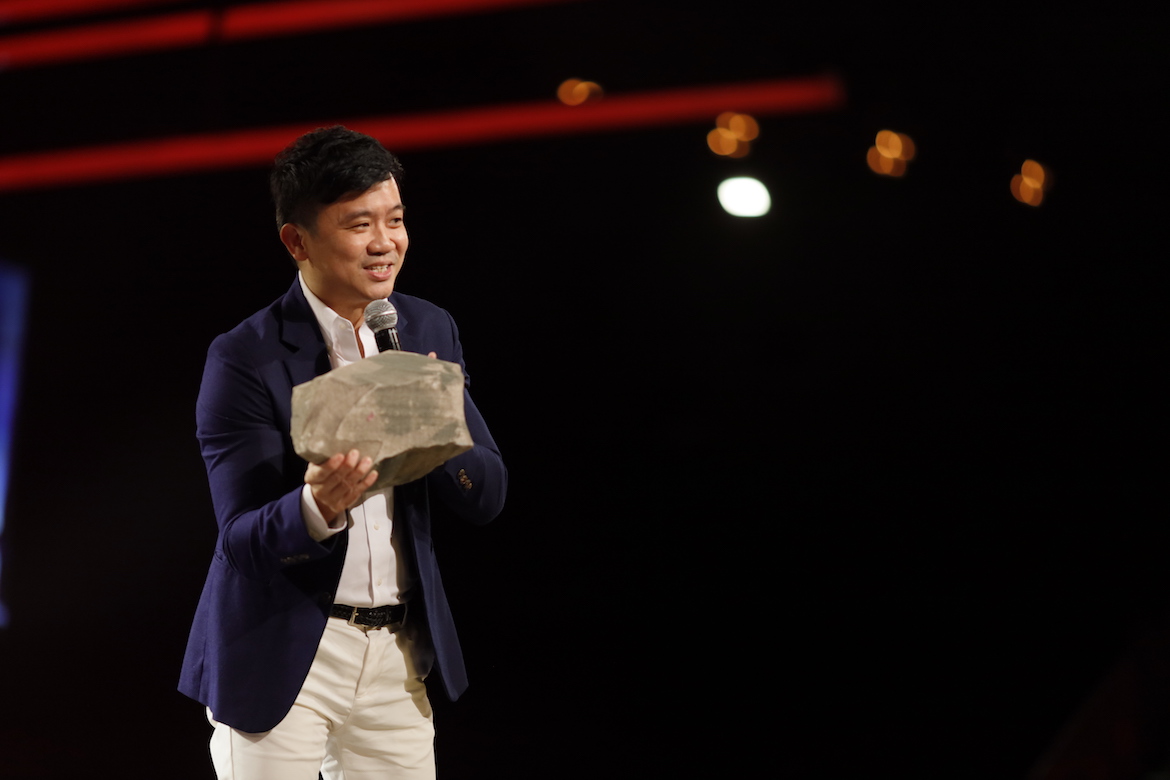 WHY DO PEOPLE NOT PICK UP THEIR STONES?
“It is because they see no value in these stones,” explained Pastor Zhuang. “They start to have fatigue just looking at the stones and being reminded of their defeat.”

For instance, most people would not stop to pick up a five-cent coin on the ground. But if it was a $50 bill, they are likely to stop no matter how busy they are, because the $50 holds value to them.

“What is the value you place on praying, on the Scripture that says ‘do not neglect the assembling of yourselves’ (Heb 10:25)?” challenged the pastor.

He gave the example of why some people do not see the point in tidying up their rooms. They feel that the room will eventually become messy again so they would rather not waste their energy—they do not see the value of a clean room.

This is exactly why the Israelites did not rebuild the walls, because of their fatigue. Nehemiah 4:10 reads, “Then Judah said, ‘The strength of the laborers is failing, and there is so much rubbish that we are not able to build the wall.”

“They had lost their strength after working so hard without rest. God knows our body and sometimes the most spiritual thing that we can do is to get a good night’s sleep,” said Pastor Zhuang with a chuckle.

He underscored his point by laying down some scientific facts. Having quality sleep improves one’s ability to learn a new motor skill by 20 percent and getting new insight in complex problems by 50 percent. Getting good sleep has also been scientifically linked to good skin health, youthful appearance and a lower risk of cancer. American football coach Vince Lombardi once said, “Fatigue makes cowards of all of us.” This translates to people not having enough strength to pick up the stones.

“We all fail in life but the question is, how do you handle the failure?” asked Pastor Zhuang, adding, “You are never a failure until you give up.”

HOW DO WE PICK UP THE STONES?
Firstly, stop making excuses, said the pastor.

Proverbs 22:13 reads, “The lazy man says, ‘There is a lion outside! I shall be slain in the streets!” Reading this verse, the pastor quipped, “Stop making excuses! You will come up with the most lame reasons just because you are lazy.”

“You have ignored your problems long enough and taken a detour around it. Start to pick up your stones immediately. Don’t become a procrastinator!” he urged.

Reading Proverbs 27:1, “There is no guarantee of tomorrow as today is a gift that God has given to you”.

To those who are waiting for the perfect time to start making changes, he said, “The longer you wait, the harder it will be to get things done. Something always comes up. Life must be lived in less than perfect circumstances.”

Nehemiah 6:15-16 says that the wall of Jerusalem was rebuilt in 52 days after lying dormant for 93 days. What was lying on the ground for decades really needed only days to rebuild.

In closing, Pastor Zhuang read Nehemiah 2:8-9 which says that the king provided everything Nehemiah needed for his rebuilding project. He reminded the church that while Nehemiah served a good king, Christians serve a King who is greater; they only need to request for God’s help because it is written that God will provide everything they need (1 Peter 4:11).

“The privilege of being Christians is that we know the end game,” declared Zhuang. “God knows the plans he has for you. Your future is bright (Jeremiah 29:11).”

Develop Spirituality To Experience The Kingdom Of God:...

A Season To Stay, Rest, Excel