Sharing from the parable of the unforgiving servant, Pastor Wu Yuzhuang preached about the need to believers to forgive others the way they have been forgiven by God.

Over the weekend of Aug 14 and 15, City Harvest Church’s pastor Wu Yuzhuang opened his sermon with a question in Matthew 18:21-22. Peter asked how often one should forgive a brother who has sinned against him. Jesus replied, “I do not say to you, up to seven times, but up to seventy times seven.” 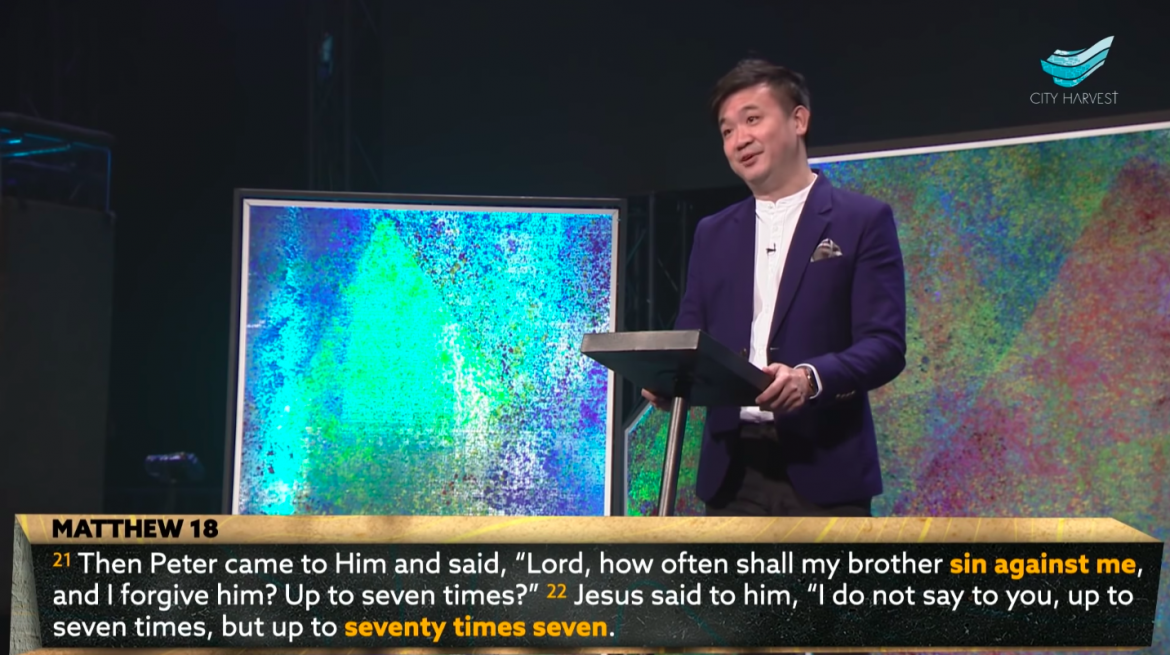 CHC has been learning about the Kingdom of God, which is the rule of God in the hearts of Christians. “Today, we want to look at another important value in the kingdom of God,” said Pastor Zhuang.

He explained that the word “sin” in Greek has two meanings—it is the act of committing an offence, or to have offended others by disappointing them.

Going back to the question, Pastor Zhuang noted that Peter asked about forgiving a brother, which meant that the offender is not a stranger, but someone close to his heart. “Most of the time, the people who hurt us the most are the ones closest to us,” he said.

He also explained the main point was not the number of times one had to forgive. “Don’t get caught up with the accuracy of that number,” said Pastor Zhuang. “What Jesus was saying is that there is no limit to forgiveness.”

The truth is, unforgiveness imprisons and poisons a person’s soul. In Matthew 18:32-35, Jesus related the parable of a servant who was unwilling to forgive his fellow servant’s debts even though his master had forgiven his own debt. The servant ended up being tortured until he could repay his own debts to his master.

Pastor Zhuang suggested that many people, including Christians, are suffering mentally because of unforgiveness. He encouraged the congregation to forgive their offenders, so as to set themselves free from this torture.

To help those who needed to be set free from this bondage, Pastor Zhuang shared five pointers on what forgiveness is.

1. FORGIVENESS IS NOT FORGETTING THE OFFENCE

Isaiah 43:25 states that God will not remember His people’s sins. However, “We are not God. Yes, we want to be like Him, but we are not totally like Him yet,” the pastor noted, explaining that we are commonly asked to “forgive and forget”, forgetting a past offence may not always be possible, causing people to feel guilty. Despite this, he believes that forgiving is possible without completely forgetting.

2. FORGIVENESS IS NOT EXCUSING WRONG BEHAVIOUR

“It is not enabling the offender to hurt you again,” he said, adding that forgiveness does not mean that a person has to place himself in the position to be harmed again. The offended person’s responsibility is to recover from the offence, not to deal with the offender, the pastor asserted.

3. FORGIVENESS IS A PARDON

In Exodus 34:9, Moses prayed that God would pardon the Israelites’ sins. According to Pastor Zhuang, forgiveness is a pardon—it acknowledges that the offender committed an offence, but at the same time it writes the offence off as a bad debt. It should not even matter if the offender apologises. “Forgiveness is really an act between you and God,” Pastor Zhuang explained.

He quoted psychologist Henry Cloud, “Forgiveness is something that we do in our hearts; we release someone from a debt that they owe us.”

Jesus was crucified on the cross and harmed by people who did not even think they were wrong. They did not repent, nor did they apologise to Him. Yet, Jesus said, ‘Father, forgive them, for they do not know what they do.’ (Lk 23:34)

“[Our offenders] may never ever repent, but we need to release them,” Pastor Zhuang continued. “Forgiveness is a pardon, the best gift we can give to ourselves.”

4. FORGIVENESS IS A DECISION

To illustrate his fourth point, Pastor Zhuang shared a Biblical story between two brothers, Esau and Jacob. In Genesis 27, Jacob tricked his father into granting him the inheritance that was initially reserved for Esau, who was the firstborn. Jacob fled in fear of his brother and Esau wrestled with unforgiveness.

Reading Genesis 27:40, Pastor Zhuang explained that the grudge Esau held against Jacob became a yoke on his neck. A yoke, the pastor explained, is something that locks two animals together in a way that when one moves, the other has to follow. Esau was attached to Jacob because of his bitterness, and thus his joy and peace were at the mercy of Jacob. “Unforgiveness is a yoke that ties you to your offender,” he explained.

Fortunately, the Bible gives Christians the key to breaking that yoke. Referring to Genesis 27:40 (NLT), the pastor said, “when you decide to break free, you will shake his yoke from your neck.”

He proceeded to share the rest of the story between Esau and Jacob. In Genesis 33, when the two brothers reunited, Esau, who had already forgiven Jacob, ran forward to embrace him. “When you can embrace the thing that hurt you, it is a good indication that the yoke is no longer holding you,” the pastor explained.

In Genesis 33:8-10 (NLT), Jacob commented that seeing Esau was like “seeing the face of God”. “When you decide to forgive, you will become more like God,” the pastor exhorted.

“Very often in life, whenever there is a misunderstanding, an offence, we look for an apology to have closure,” the pastor added. “But I decide my closure, not my offender. I decide when to move on.” He encouraged the church not to be stuck in the past but to make the decision to forgive.

5. FORGIVENESS IS A PROCESS

Finally, Pastor Zhuang returned to the main text of the sermon, Matthew 18:22. To the pastor, forgiving someone 70 times seven times is “to forgive again, and again, and again”. He then listed the many times Jesus forgave Peter. Although Peter rejected Jesus at His crucifixion, Jesus appeared to Peter after His resurrection (Lk 24:34, 1 Cor 15:5). He noted that an offence can cause many repercussions and one needs to forgive again and again.

“Forgiveness is a process that you and I need to embrace,” Pastor Zhuang declared. “It’s okay to say, ‘I choose to forgive but I’m still in a process of forgiving.’”

In closing his sermon, Pastor Zhuang read from John 20:25-27 where Jesus showed Thomas, one of His disciples, the scars on His hands. “Jesus didn’t show Thomas His wounds,” the pastor said, “He showed him His scars.”

He added, “There is a difference between wounds and scars. Wounds reveal the part that is still hurting. Scars reveal the part that was once hurt but is now healed.” By this, Pastor Zhuang meant that while the memory of the offence might always still be there, forgiveness can erase the pain of that memory.

He ended the service with a prayer for people struggling with unforgiveness, followed by a salvation prayer.