Salvation: What Is It And How To Receive It?

What exactly does it mean to be saved? As Easter approaches, one writer reflects on the truth about salvation. At the age of 6, I was an avid Snow White fan. I dreamed that one day my prince would come, riding on a white horse, and whisk me away to live happily ever after.

But as I grew up, reality hit and I realized I would have to fend for myself most of the time. I was a fat kid who was not particularly good at studies or sports. I was the unpopular kid who embarrassed herself all the time.

Teenage years brought about changes I didn’t understand and emotions I was not familiar with. Arguments with my parents turn into cold wars and I felt lonely, unappreciated and insecure. Where was my prince on the white horse?

In the Cambridge dictionary, “salvation” is defined as “being saved from danger, loss or harm”. Throughout the Bible, we see God saving His people from these three situations time and again. When the children of  Israel were enslaved in Egypt, God brought salvation by sending Moses to lead them out of slavery. David was a man of war and he wrote many psalms about how God saved Israel from their enemies.

But as technology has improved over the millennia, mankind has become more self-assured. So does salvation still play a part in modern society?

While most people, particularly those in First World countries, seem to have it all on the outside, often we see that there is a longing in their hearts to be rescued—from depression, from hopelessness, from meaninglessness in life. Marvel’s Avengers: Endgame opens at the end of this month, and in every cinema across Singapore and in cities all over the world, you will see thousands of people spending good money to immerse themselves in the fantasy of their favorite superheroes trying to reverse the damage the villain Thanos inflicted in Infinity War. No matter how many hundreds of years have passed, the knight-in-shining-armor-to-the-rescue theme never gets old.

But once we step out of the movie theater and back into our own reality, we are left to wonder, How about us? Where does our help come from?

The first two verses of Psalm 121 say, “I will lift up my eyes to the hills—from whence comes my help? My help comes from the Lord, who made heaven and earth.”

My knight-in-shining-armor finally found me when I was 15. He was someone I had known my whole life. When I was a little kid, I was afraid of ghosts and of the dark, and my mom would teach me to pray. She taught me that Jesus will always come when I pray. As I grew up and grew braver, I forgot all about Him. But thankfully, my friends invited me to church and I met Him again that day. I accepted Him as my Savior, and He has been rescuing me ever since.

JESUS CAME TO SAVE THE WORLD
God created Man to be in close contact with Him. When Adam and Eve took a bite of the forbidden fruit, they sinned against God and dragged all of mankind down with them. That incident caused Man to be separated from his Creator. That sounds like another myth from long, long ago, but the effects of that separation are still evident today. All the emotional issues of fear, insecurity, depression, loneliness, self-doubt take root from the fact that fallen mankind does not know the Creator.

Apostle Paul told to the Roman church that “all have sinned and fall short of the glory of God” (Rom 3:23) and “the wages of sin is death” (Rom 6:23). The sinful nature of man prevents them from knowing God’s love and His plan for their lives. The result is not only physical death as we know it, but also spiritual death, which is separation from God for eternity. We cannot save ourselves with our good works, because even with our best efforts, we are doomed to fail.

The good news is, God understands that and He wants to help us. He has a plan to save the world and He sent His Son Jesus Christ to pay for our sins. For that reason, Jesus died on the cross, was buried, and He was resurrected on the third day.

The Bible says in 1 Peter 2:24-25 (MSG), “He used his servant body to carry our sins to the Cross so we could be rid of sin, free to live the right way. His wounds became your healing. You were lost sheep with no idea who you were or where you were going. Now you’re named and kept for good by the Shepherd of your souls.”

HOW DO YOU GET SAVED?
Now that Jesus has dealt with our sins, we have the chance to get to know God. And we do that by confessing our sins and accepting Jesus Christ as our personal Lord and Savior, by faith. Having faith means we make a decision in our heart to believe and speak out with our mouth what we believe.

Romans 10:8-10 reads, “It’s the word of faith that welcomes God to go to work and set things right for us. This is the core of our preaching. Say the welcoming word to God—‘Jesus is my Master’—embracing, body and soul, God’s work of doing in us what He did in raising Jesus from the dead. That’s it. You’re not “doing” anything; you’re simply calling out to God, believing that Jesus died for you, and trusting God to save you from eternal death. That’s salvation. With your whole being, you embrace God setting things right, and then you say it, right out loud: ‘God has set everything right between him and me!’”

Once we receive Jesus, God forgives our sins and accepts us as His children. We now have access to God and we can speak to Him directly through prayer. Most importantly, we now have the Holy Spirit who will help us lead the life Jesus came to show us.

For this reason, Christians all around the world celebrate Easter Sunday. That is the day Jesus rose from the dead and salvation became available to all mankind—all one needs to do is believe with your heart and speak it with your mouth.

This Easter, City Harvest Church has prepared a drama production “The J Factor”, that tells of God’s love and salvation. Join us at Suntec Singapore level 6 on Friday, April 19 at 4pm; Saturday, April 20 at 5pm and Sunday, April 21 at 10am. 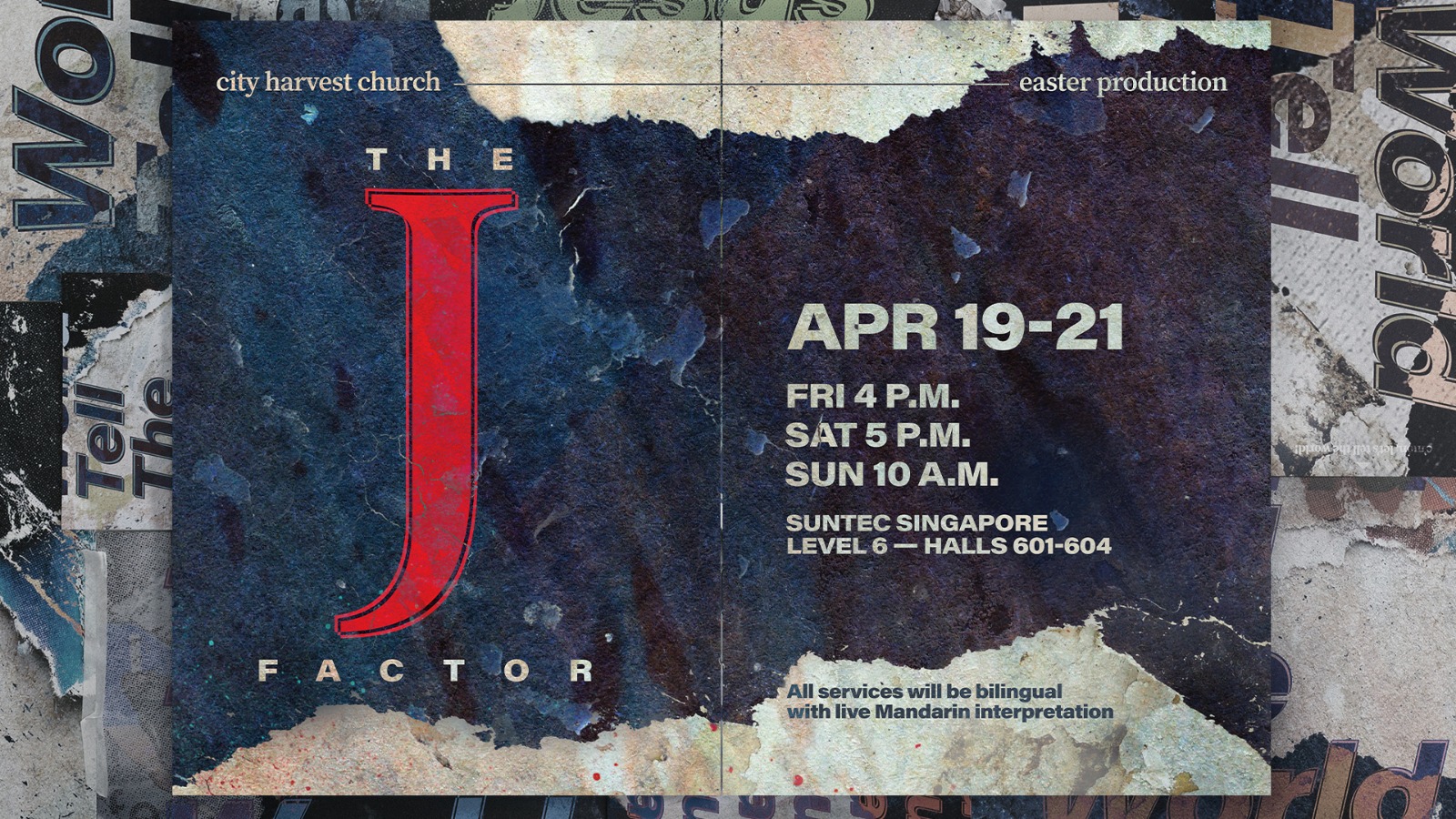