Prophetic Painting: The Art Of Worship 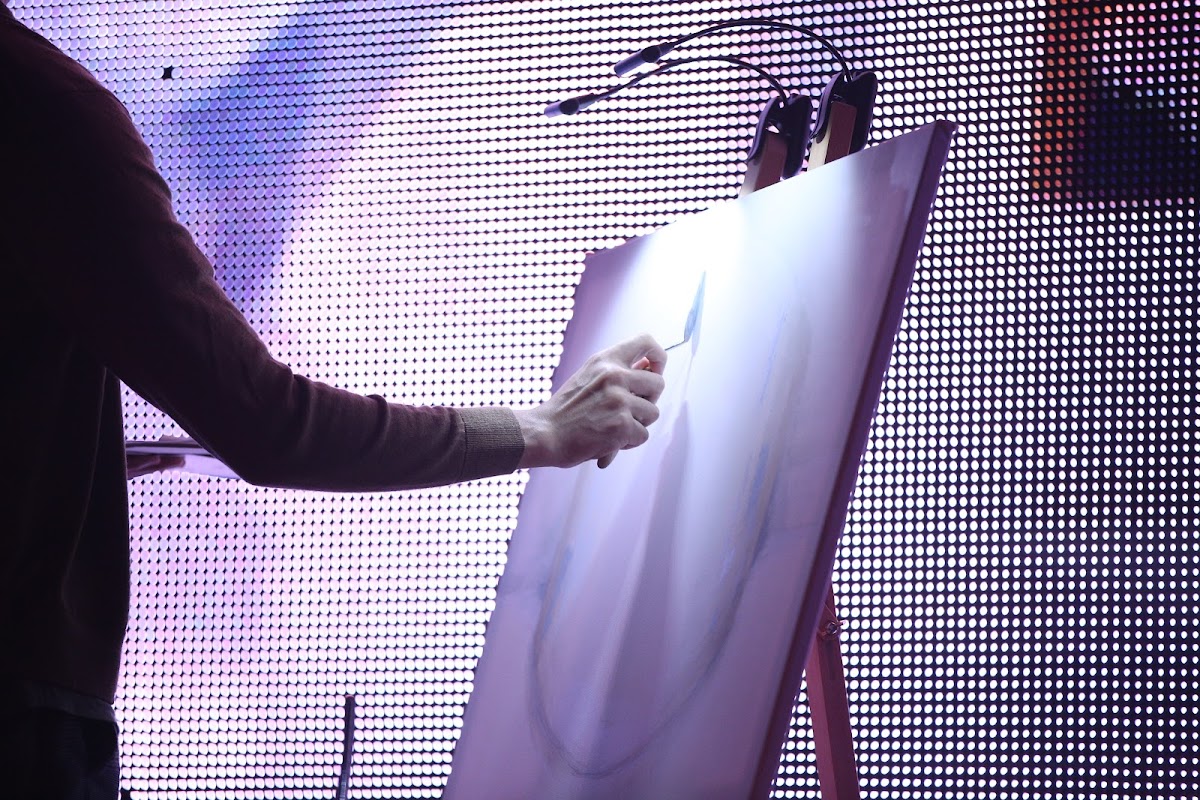 The easels first appeared on the City Harvest stage on Nov 4.  As the worship leaders began to sing, two people started to paint, putting their final touches on their art works when worship drew to a close. Both artists were painting from divine inspiration from God, demonstrating a different dimension of knowing God.

Since then, it has taken place on Sundays during service. We spoke to two artists who painted at the Nov 11 service, Dexter Ang and Kristina Balzomo Lim.

Dexter and Kristina belong to a group of prophetic painters in City Harvest Church. “We gathered to pray to ask God what did He want to say through the paintings,” Dexter explained.

“When I was praying, I felt led to illustrate the assurance of God as our rock. I was led to 1 Samuel 7; it’s about the prophet Samuel setting up a memorial stone after God delivered the Israelites in a battle against the Philistines. This stone was called Ebenezer—the stone of help.”

But Dexter didn’t want to just to paint a rock. “I wanted to create a form of assurance. As I was praying and trying to grasp what the Holy Spirit was trying to say, I felt that there was this space, and within the space was a form that was large but not imposing—the largeness of God in our situations and He is always being there.” 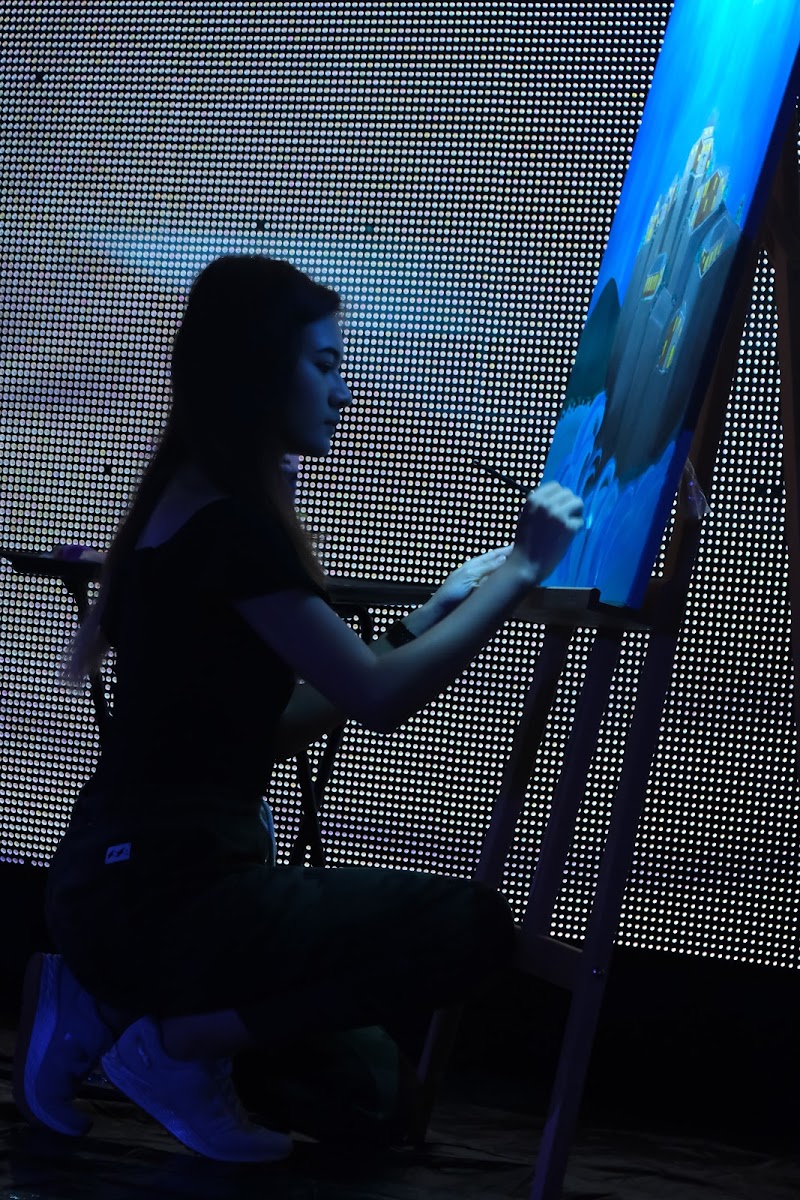 Kristina’s painting was that of a city on a hill. “The revelation that I received from God is that this city is a representation of our church. Our church has a very firm foundation, so no matter how the enemy tries to kill, steal and destroy—the ground will start to tremble—but it will never crumble,” she said.

“I felt that God gave me this vision to encourage our church members that everything the church has gone through, all the trials and tribulations, are not for nothing. They strengthen us. We have to believe and have faith that our foundation is indeed very strong because it is the firm foundation of Jesus Christ.” 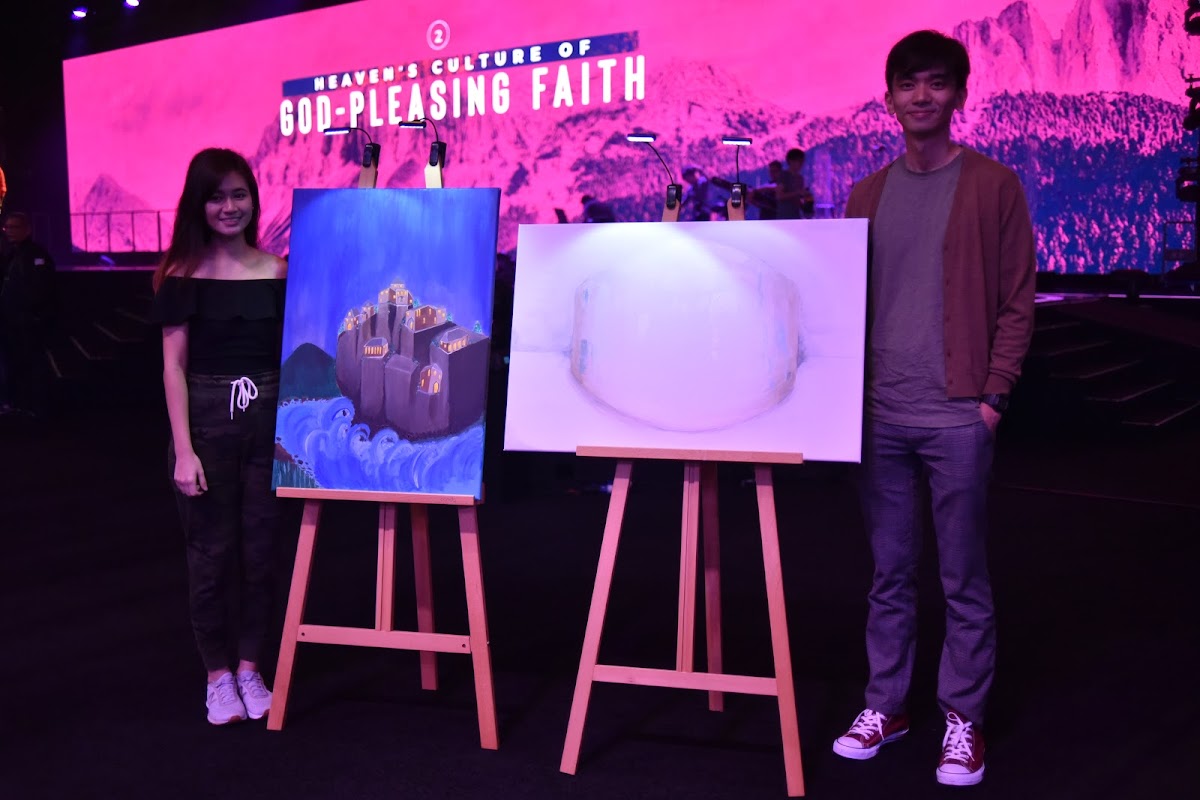 PAINTING AS A MINISTRY TO GOD

How prophetic painting took the stage at CHC began with a chance encounter between Kristina and the church’s executive pastor Sun Ho. “We started talking about Bethel Church and how they did prophetic painting and Pastor Sun turned to us and said, ‘Why don’t we start it?’ So, we started it on the following service. The response from the church was really good and many of them felt blessed by the painting.”

“We started to do prophetic painting during our zone’s worship night,” he recalled. “It is really by the grace of God that we (the painters) were all brought together, including Kristina and I. They all have their individual revelation of how God wants to use visual arts to minister to people. This was a culmination of many events, inspirations, and revelation.”

Both Dexter and Kristina have a strong passion for the visual art and had always wanted to find a place for it in ministry to God.

“I was reminded of the Renaissance period, when visual arts was a medium that inspired people to come closer to God,” noted Dexter. “That’s why you would see very grand paintings in old churches. But over the years, it gradually lost that role. Since I had that realization, I have had a desire to bring that back.”

Kristina, who is most comfortable drawing with pens and pencils, only started painting recently. “This is my second prophetic painting. I’ve always looked to my grandfather as my inspiration because he was a really good painter. Whenever I see his paintings I always feel very blessed. After he passed on, his paintings remind me of him. I was feeling lost for a while as I didn’t know how to serve God. I feel that this is a very good opportunity for me to serve the Lord with my gifts and talents. Whatever God speaks to me about, I can translate it and it can be used to bless other people,” she said.

THE BACKGROUND TO PROPHETIC ARTS

Bobby Chaw, an executive pastor at CHC, explains that the prophetic arts must be understood in the context of what the Bible says about “prophecy” and “arts”.

Prophecies have three purposes: to edify, exhort and comfort people (I Cor 14:3). But 1 Cor 12 also spells out some key features of prophecies: prophecies are supernaturally given by the Holy Spirit; they are not perfect; and all prophecies have to be tested.

“Art is the expression or application of human creative skills, imagination, thoughts and ideas—it can take the form of musical expression, sculptural design, painting and other forms of creative expression,” says Pastor Bobby.

Art is apparent in the Bible, he adds. If we look at the very beginning of the Bible, “God created the heaven and the earth”. “The Bible opens up with a recognition that our God is the ultimate artist of everything,” notes the pastor.

Then there is the Tabernacle which was designed by God through instructions to Moses. The artisans were called by the Lord Himself, who “filled them with skill to do all manner of work”. The covering of the Tabernacle featured cherubim as a reminder to the priests as they entered, that angels watch over them.

Paintings in particular have an important role historical in bringing the Scriptures to the unlearned, as text was only available in Latin up to the 15th century. Visual images helped the people to understand and remember what they had heard preached in church. Paintings also have the power to stir the believers’ heart, move them to action and help them as they reflect during devotion. 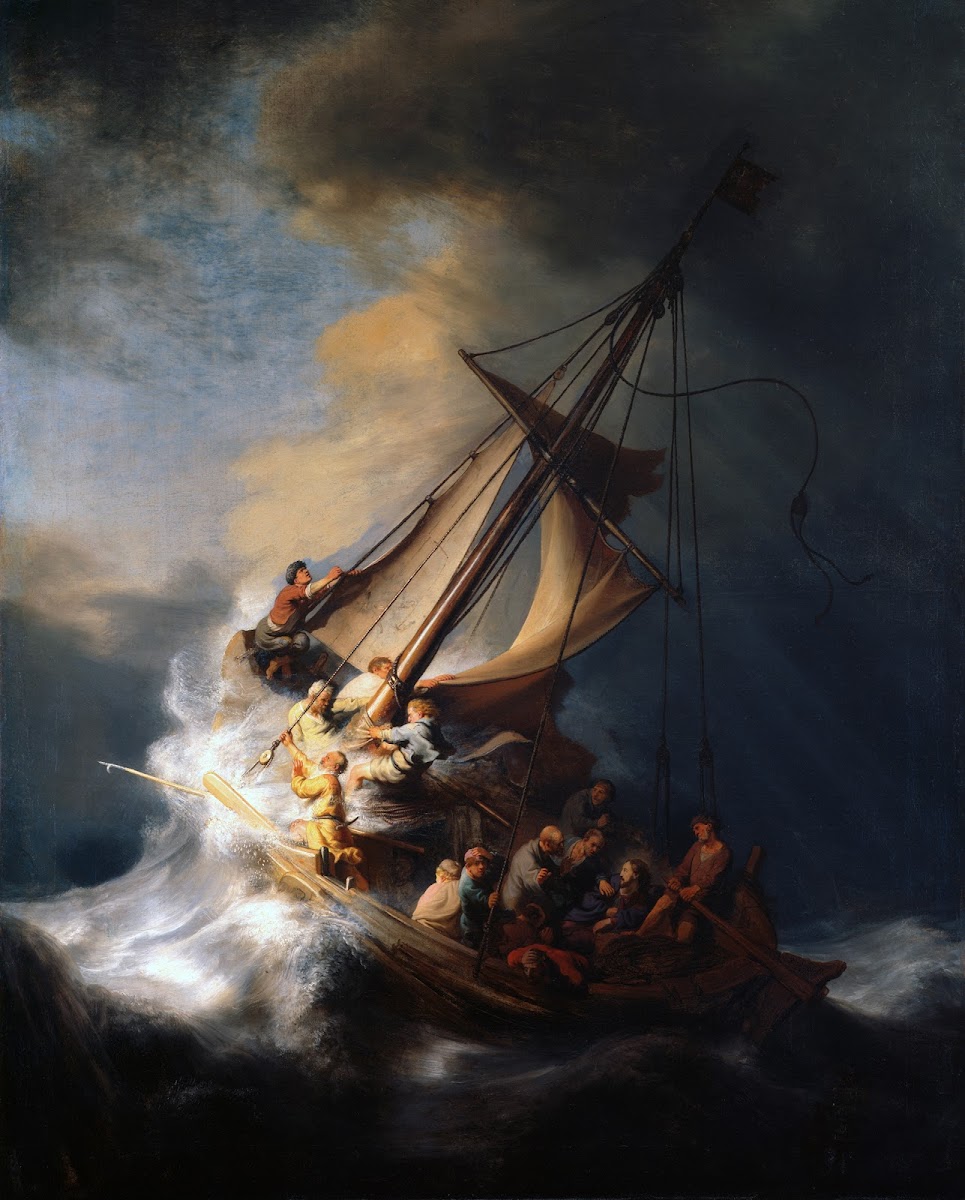 What is interesting, notes Pastor Bobby, is that culture today is becoming post-literate, that is, people are preferring audio and visual media than text and reading when it comes to expressing themselves. He muses, “Given the power of images to aid in learning, could the recent surge in prophetic arts be the Holy Spirit’s way of communicating with His church in a powerful way?”

TOUCHED BY A PROPHETIC PAINTING

Miss K* is a CHC member who serves in Missio Dei, the church’s mission ministry. During a prophetic painting session on stage a few weeks ago, she painted a pair of hands that bore holes, holding a bowl of red contents.

Miss K had grown up in a dysfunctional family; as a result of being abused, from the age of 5, she would pray every night asking the gods to kill her. As she grew up she tried to commit suicide many times, had different addictions, exhibited self-destructive behavior, fell into immoral relationships, went to different gods and was even involved in witchcraft. She once accepted Christ when she was 17.

Things started to change when Miss K relocated to Singapore for work five years ago. One day she came to CHC on her own, and responded to the altar call for rededication. She started attending CHC and embarked on a genuine relationship with God: she learned how to pray and read the Bible and she was baptized in Holy Spirit. Miss K had been experiencing breakthrough after breakthrough in her life. She studied in SOT in 2015. Two years ago, when she was in Indonesia for a mission trip, God spoke to her very clearly, “I am your light” and gave her ‭‭Isaiah‬ ‭60:19-20‬.

From a very young age, drawing and painting were a big part of her life. She could barely speak or engage with other kids, so drawing became her way of communicating. At university, she majored in Fine Arts, but she completely stopped painting right after graduation, because she had been taught that art is self-expression, and she felt there was nothing to express in her. She never thought God will bring redemption to this area of her life.

After she graduated from CHC’s School of Theology in 2015, God told her to go to Bethel Church in the US. At that time, she did not know anything about Bethel, so she just obeyed the voice of God. During her visit there, a total stranger prayed for her and said, “Art is something important for you. Ask the Holy Spirit what He wants to release, paint it out, and pass it to the person you prayed for. The painting will be a blueprint of the supernatural. Through the painting, Heaven will be released.“

Although she received the Word, she did not go back to painting right after the trip. But the Holy Spirit kept urging her to paint, so she prayed to God, “Lord, I will obey, but I will not paint unless you show me what to paint,” and slowly she began to paint again. Painting became her time of prayer and communion with Him. She feels His leading in every stroke she paints. She is still a very quiet person and not good at interacting with others, but she is grateful for this gift, which God gave her a language to express His love and His glory.

One of Miss K’s fellow cell group members, 75-year-old Fumie Seno, who followed another religion most of her life until receiving Christ last December, caught sight of Miss K painting and wept. She said that when she saw the painting, and the scars in the hands of Jesus, Fumie strongly sensed the love of Christ, His sacrificial love, that He died on the cross for her to live. The painting ministered to her so much about the love of God.

It’s early days, but there are plans to start a Prophetic Art ministry in CHC, to give those who wish to express their worship through art a platform to do so. The process begins on Wednesdays, when the artists pray through and begin their artworks. As there is very little time during service, the on-stage painting involves putting finishing touches on their paintings once a month during Sunday service. All paintings will be made available for sale. Proceeds go to supplying canvases and art materials to the artists.

*A pseudonym has been used at Miss K’s request due to the sensitive details of her past.

If you would like to find out more about prophetic painting at CHC, please email info@chc.org.sg