If you had stepped into Mountbatten Community Club on Jul 8, you would have been instantly transported back to the good old kampong days. The space was set up for a Parent’s Day celebration for 160 seniors. It was the first time CHCSA had used a community club for an event. Among the beneficiaries, 100 of them came from CHCSA’s senior center, House of JOY at Old Airport Road, with the other 60 from Toa Payoh.

Each participant even received a kampong-theme swag bag filled with familiar favorites from the good old days: an almond fan, chapteh (a feather-topped toy), a back scratcher, a “Good Morning” exercise towel and a packet of sugar biscuits.

To make the event even more special, City Harvest Dialect Church’s volunteers presented a drama and three song items. The drama depicted a family’s reunion dinner which saw a grandson returning from overseas to his grandparents’ home, only to face their disapproval of the change in his attitude and behavior. The boy’s mother quickly refuted their argument and dismissed it as being too traditional. “The idea came from a certain mindset or upbringing of children between two different generations of people,” says Justin Chiang, 35, the drama’s director and scriptwriter. “Differences between how the grandparents and how their children bring up their grandkids causes friction.”

Chiang and his team of volunteers from Dialect Church ministry worked on the drama for a month. They were supported also by volunteers from City Harvest Church’s School of Theology 2016 cohort.

“We want to honor and appreciate the elderly as parents and grandparents, and at the same time, create opportunities for volunteerism and partnership between CHCSA and the grassroots organizations,” says Kenny Low, the executive director of CHCSA. CHCSA’s board members walked the talk by doing their part in volunteering for the event. On top of that, they also sponsored prizes for the event’s lucky draw.

“Giving back to the society makes us human,” said Vincent Chang, 52, a director of financial services and a board member of CHCSA. “We should all try to become a better person and make serving part of our lives.”

Fellow Board member Allan Ong, 60, agreed. “CHCSA is where we can mobilize every single City Harvest member to utilize their love towards the society.”

The event indeed drew young church volunteers. There were 21 members aged between 20 to 30 years from the pastoral zone led by Ee Zhenying who volunteered to perform a song item and serve the beneficiaries.

“It was a team effort. Would not have been possible without the support of volunteers from CHC,” noted Low.

By the end of the day, the beneficiaries left the hall with a smile on their faces. “Their services are very good,” said beneficiary Madam Lim, in Mandarin. “I am very happy that they are willing to bring us out!” 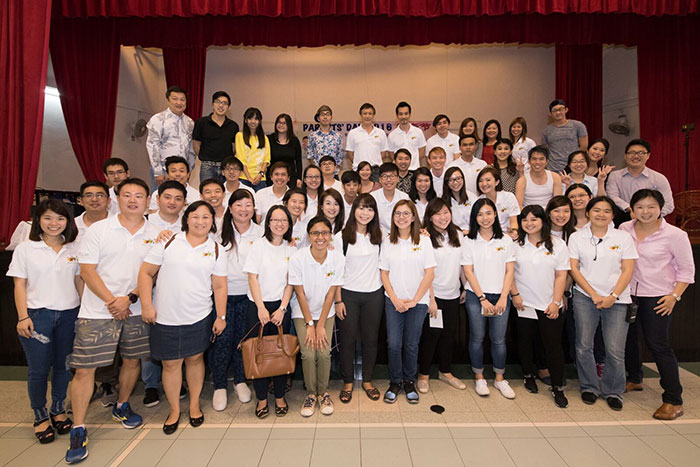