Lim Kai Li, Jason Lee and Evangelyn Koh serve in different ministries in City Harvest Church, but they have one thing in common: they each found his and her calling through serving in ministry and took the skills they learnt in the church to the marketplace.

Over two weekends (20-21 and 27-28 August 2022), City Harvest Church conducted Ministry Recruitment during its service weekends, calling for its members to serve the house of God. The church’s senior pastor Kong Hee taught how Jesus came to serve His disciples and encouraged members to reciprocate His love by partnering with Him in Kingdom work. Serving in ministry has led some volunteers to finding their full time career and calling, like Jason Lee (bottom right)

To serve in the house of God is to use the gifts He has given the believer to bless others. However, serving in the church can feel daunting. First, there is a myriad of ministries to choose from; then you need to leave the comfort of your cell group to meet new people. Serving also means you have to give up some of your precious time each week or month.

Yet most CHC volunteers will tell you that they have received more than what they give when they serve. For Lim Kai Li, Jason Lee and Evangelyn Koh, their time in the ministry gave them the skillset and the opportunity to do their dream job.

Lim Kai Li is a CHC member who has been serving in the Dialect Service ministry for seven years. Her passion for serving the elderly eventually opened doors for her.

“I grew up with my grandparents, so hanging out with them and their friends is normal to me,” says Kai Li. “However, I realised that not many of my peers are passionate about the elderly. I have always felt that the elderly are a group often overlooked by society.” That led Kai Li to join CHC’s Dialect Service ministry, which reaches out primarily to dialect-speaking elderly persons.

Being the only one from her cell group to join the ministry, Kai Li initially found serving uncomfortable. But she pushed herself to overcome her fears, and began to serve in any area she was needed.

“In the beginning, I helped out with saturation (door-to-door publicity for events). Before Easter celebrations, I would go knocking on doors at the estates where our elderly members reside and invite them for the service,” she recalls. “Soon, I was asked to help out with bussing the elderly members to and from Jurong West church where we hold our services. Shortly after, I was asked to help with visual communications for the Dialect Service.” 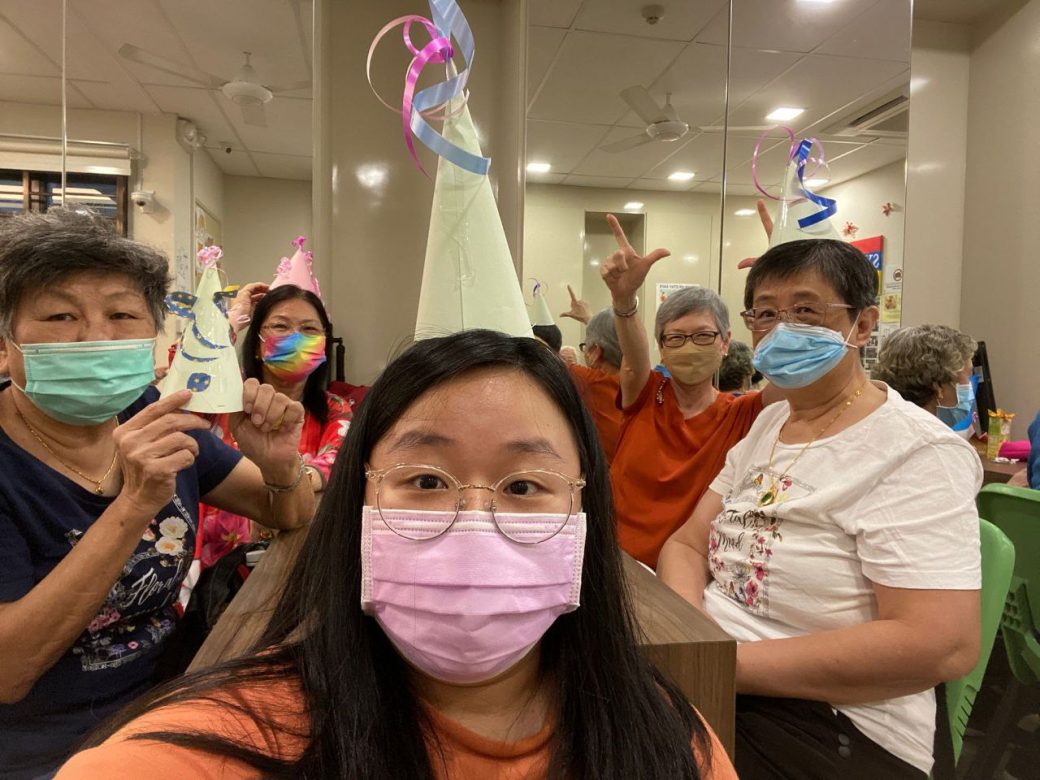 Kai Li’s willingness to serve in different capacities opened up new opportunities for her. She met another volunteer while she was serving in the visual communications role. This other volunteer worked for Fei Yue Community Services and introduced Kai Li to a role in her organisation that was in line with what Kai Li was doing in Dialect ministry. That led Kai Li to being recruited for her current job at Fei Yue’s eldercare centre, where she plans events for seniors to promote active ageing.

One thing she learned from the ministry is how volunteers do life with the seniors and build rapport with them. Because she grew up under her grandparents’ care, Kai Li always treated the elderly with respect and kept a certain distance from them. This is the case with most people, who are polite to seniors, but in doing so, inadvertently create a wall between them.

“But my ministry leader, Jia Min, always interacts with the elderly like a friend,” Kai Li shares. “It began to rub off on me. I began to see the elderly as my friends too, and I learnt to treat them as such, even the elderly folks at my workplace now.”

JASON LEE: MINISTRY IS WHERE I HONED MY SKILLS

Jason Lee began as a freelance photographer, later moving into e-commerce photography with NTUC Fairprice. Today, he is a photojournalist for Chinese newspaper Lianhe Zaobao.

Like Kai Li, Jason’s career began when his interest in photography was cultivated while serving God in CHC’s Photography ministry. A Photography ministry volunteer, Jason is today a photojournalist with Lianhe Zaobao

“Before I joined the photography ministry, I wasn’t serious about it—I was mostly playing around with a compact camera,” Jason shares. “I started serving in 2008 during a ministry recruitment drive and it was in the ministry that I developed interest and started to hone my skills.”

As he served, Jason received guidance from his ministry team leaders and learned about the different photography styles and techniques. After each service, the photographers would gather for a debrief where the ministry leader would point out what was good and not so good about the images they captured.

“Some of the feedback was good, some of it was a little harsh. But they were all really good learning points for me,” he remembers. As he learned from feedback, he began to improve noticeably. “The ministry leaders who had seen me serve over the years would also point out the ways I’ve improved.” These sessions helped him understand how he could do better, and all the lessons he learned in ministry stayed with him when he entered the workforce.

Beyond weekend services at CHC, Jason has also had the chance to serve during many large-scale events and activities organised by the church, such as Emerge and Asia Conference.

“When I first started out doing freelance jobs, I went in with full confidence—not because of my skill set, but because through the ministry, I had different opportunities to serve in different types of events. That helped to build up my foundation,” he says.

Evangelyn started serving in the Makeup ministry only half a year after she started attending CHC. Like Jason, she stumbled upon the ministry through a recruitment drive in 2011.

The only experience Evangelyn had had with makeup at that point was sneaking into her sister’s room to try on her products and watching online makeup tutorials.

She recalls how she was blessed to receive professional training when she joined the ministry. “We had a member who was a Makeup Forever trainer and she taught a full course for free!” Evangelyn says. “The course ran for three months, and we had a class every week.” At the end of the course, Evangelyn had to pass an exam before she could start serving in the church. Through the ministry, she only learnt to do makeup for church events, but she also had the opportunity to take on freelance jobs outside of church through her ministry leaders.

“This is how our ministry helps each other: when there are external jobs that require makeup artistes, we would ask within the ministry for people,” Evangelyn explains. “We would often go to these jobs in big groups, so as a new makeup artist, I had more experienced artists around me to help and guide me along.”

After serving in the church for a number of years, Evangelyn had built a sizeable portfolio through her freelance gigs. Soon, she began taking on jobs on her own and today, she is a full-time makeup artist.

But it wasn’t always easy and fun. “Honestly, 10 years ago, serving God was challenging,” Evangelyn shares. “We’re all human. Having to serve for the Sunday service would mean I have to be in the church around 8am. But now, it doesn’t feel like a chore anymore—I love to serve and don’t find it tiring anymore. When I help others to look good, I feel good too.”

While serving in a ministry can sometimes be time-consuming and tiring, it can also be a rewarding experience that may lead one to his or her calling in life. Jesus came to serve His believers and that was how He lived out His entire life. Christians must mirror that, not as an obligation, but as solidarity with Jesus so that we can live the way that He did.