Kicking off the first leg of their “Worship Nights Asia” tour here in Singapore, the Bethel Music team brought home the raw presence of God for this City News writer. It was a concert unlike any other I’d attended.

The evening opened with a visually compelling video of a lady dancing in a cloud of fine dust, cloth and colored powder, symbolizing an open invitation to all present to shake off the “dust” and inhibitions in their souls to walk down the aisle which Jesus, the Bridegroom, had prepared for His Bride, the Church.

I was filled with anticipation, and could not help but feel that Singapore was divinely chosen to be the first leg of the Bethel Music “Worship Nights Asia” tour. The concert was held on a Thursday evening on October 15 at the Star Performing Arts Centre.

“Be still, and know that I am God,” quoted worship leader Jacob Cook from Psalm 46:10. Many people, myself included, rushed forward from their seats to the front of the stage.

While the arrangements were simple, the anointing carried by the worship team was weighty. The first half of the session was led by Jeremy Riddle and Hunter Thompson—both starkly different in musical styles while carrying the same spirit of worship. Riddle has a solid voice, and he led us into a time of joy, shouting and declaration whereas Thompson’s voice was bright and gentle, bringing the sweet presence of the Lord into our midst.

It was during this session that I received a vision from God. I saw a forest with sunlight shining through the canopy of the trees. I felt great peace and assurance that God is my source of hope, especially during this period as I am going through a career transition. Cook then prayed the Lord’s Prayer from Matthew 6 with the audience; as one body, we asked for forgiveness from the Lord in our individual lives.

To the pleasant surprise of the audience, Cook then started to prophesy over several members in the audience, some of whom looked visibly moved as he spoke words of encouragement over them. He also encouraged everyone to prophesy for each other more in their daily lives.

“It was amazing to see the whole place filled with responsive people!” 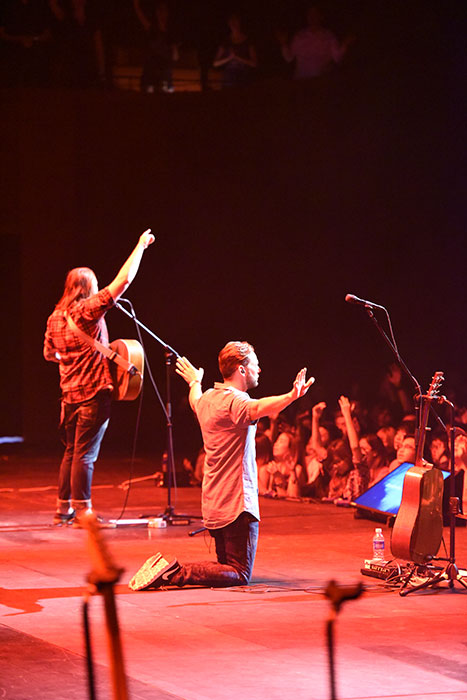 Eunice Yeung, 29, a senior executive among those who received a prophetic word from Cook.

“Cook prophesied over me in a very loving way which confirmed to me that God know my prayers, struggles, concerns and hope for my family’s salvation, and that God is with me even in my darkest moments. It was quite surprising and I felt extremely blessed!”

The second half of the session was led by Amanda Cook, wife of Jacob Cook and songwriter of the hit song “You Make Me Brave.” She was joined by Josh Baldwin, another Bethel worship leader.

“My favorite part of this whole experience was when Amanda Cook sang a prayer for Singapore and it came from her heart’s desire to pray for this city,” said Aldrich Tjahjadi, a worship leader from City Harvest Church.

The themes of her spontaneous worship revolved around the defeating of fears and the declaration of our identity as children of God as she sang, “Let our praises fill this city for You are good … ” in addition to the worship song “No Longer Slaves.”

As she sang, I felt a sudden shift in the spiritual atmosphere, with heaven being opened, chains broken and people set free in Christ; I felt the overflowing joy of the people.

“It was an unpretentious worship session … very heartfelt, very genuine and very simple. I think the takeaway for me is the simplicity of worship alone,” said Benjamin Kheng from local pop quartet The Sam Willows.

The ending praise song of the night, “One Thing Remains” led by Thompson brought home exactly that—the one enduring thing, the love of God.

His love never fails, it never gives up, it never runs out on me …