The Ang brothers are leaving their imprint on the music scene with a continuous flow of singles, music videos and their first solo concert. 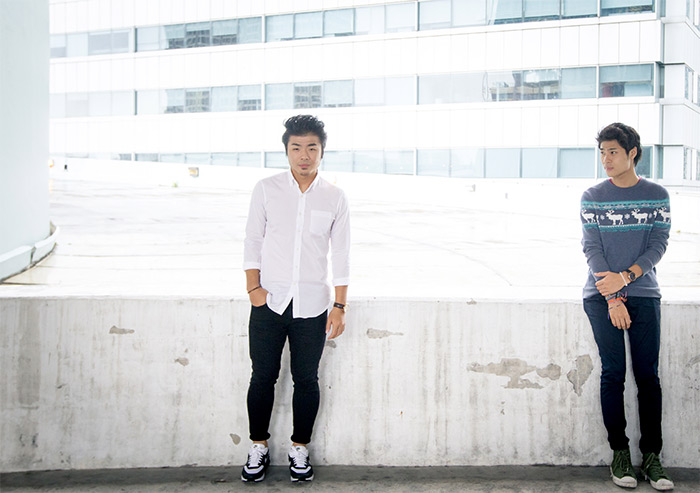 They must be related: Amos (left) and Adam Ang share talents and passion for music. CN PHOTO: Michael Chan

In the short two years since they released their first EP on iTunes, the brothers of Scarlet Avenue, Amos and Adam Ang, have brought their music deep into the marketplace: they’ve played at countless events, gone on air with many radio stations, penned a theme song for a telemovie called Two Boys And A Mermaid and, most momentously, held their first solo concert, Scarlet Avenue Unplugged (see box). City News Weekly sits them down for a chat.

You’ve done loads in the past year: your concert, your singles ‘Paper Planes’, ‘Lighthouse’. What are you most happy with?
Amos: I think we’re most happy about sharing of our music with people. I think this is one of the things we have always looked forward to, so we are happy that during this past one year we were able to get our music out. People are sharing our music videos and we’re really happy about it.
Adam: I hope to write more songs to reach out to more people.

Apart from music, what are both of you doing now?
Amos: I’m studying video: filming, learning how to film, how to edit, learning how to direct.
Adam: I’m still in school. I major in guitar at LASALLE. It’s fun—everything around me is music.

Did you have to sacrifice anything in order to pursue your dream?
Amos: Not really, because since we were young we dreamed about doing this. So there wasn’t much of a sacrifice.
Adam: We just understood there were things we couldn’t do so much anymore.
Amos: Because music’s more important to us. Maybe the biggest sacrifice is not to eat a lot, to stay in shape. I have to stay in shape. Adam’s always in that shape.
Adam: My biggest sacrifice is, I guess, time. I’m happy doing it, but having enough time is an important factor as well.

What is your Plan B?
Amos: When I was young, I didn’t think of any Plan B, because [music] was my full-on dream. But now that we have grown older, reality check! So my Plan B is creating videos. And maybe singing in a pub?
Adam: I’d probably be a chef—I like to cook. Or a painter. Or a writer.

What would you say is the purpose of your music?
Amos: To make people happy.
Adam: To help them find what they’re searching for through our music. Like what music has done for us—we were each able to find something we were looking for in music.

Tell us about your writing process.
Adam: It’s balanced.
Amos: It really depends. Like sometimes, I can write the melody­—
Adam: There’s no one structure.
Amos: There’s really no structure, it’s basically free flow. Sometimes we just write the melody and the lyrics at the same time.
Adam: Sometimes, it’s like a poem and we would put melody and chords into it. It comes from everywhere.

Let’s take ‘Lighthouse’. Who wrote the lyrics?
Amos: Adam.
Adam: I wrote the lyrics, and then I showed it to my brother and then we both changed the lyrics together here and there.
Amos: So, I think, when it comes to songwriting, it’s kinda like teamwork.

You are both CHC members—how has your faith helped you? Do you serve in church?
Amos: I serve in my cell group. I started as a cell group guitarist, then I did refreshments and song sheets. Now I’m serving in the worship team.
Adam: I was a cell group guitarist.
Amos: He was a connect group leader.
Adam: Yeah. So having our faith, it keeps us sane, it keeps us planted in the crazy industry. It keeps us rooted.
Amos: It gives us value checks.
Adam: It gives us faith.

If you could choose any artist in the world, dead or alive, who would you most like to record/ perform with?
Amos: We have so many idols. Green Day. I wanna sing with Green Day. Green Day was the first band we held as idols.
Adam: I wanna sing with U2. John Mayer. Ben Howard. BB King.
Amos: The list could go on.

What is your advice to anyone who wants to start in the music industry?
Adam: Go for it. Get a good producer. Write songs, keep on writing.
Amos: Get a good record label.
Adam: Post videos on YouTube. Just start somewhere.
Amos: You only have one life to live so you might as well live it.

Your iTunes and Spotify accounts have followers from all over the world. Where from and do they write you fan mail?
Adam: They write fan comments. It’s nice to see some of them come from Indonesia and the US.
Amos: I’ve received some from Australia, the Philippines, France.

Do you have any greetings for the church?
Amos: Thank you City Harvest for your love and support.
Adam: We are happy to be part of this family.

Singapore duo Scarlet Avenue proved winsome performers as they entertained their fans at an intimate concert on Jul 16. Peppering their performance with casual exchanges with the crowd, brothers Amos and Adam Ang performed a mixture of their own songs as well as covers from American band Green Day, whose songs they used to rehearse in front of their father every night for two hours.Laughter abounded as they shared the stories behind some of their songs: Amos revealed that ‘Girl Next Door’ was about was a blossoming romance between him and a girl who lived next door to them when they were growing up in France. However, an unlikely romance also flourished between the same girl and Adam.

The highlight of the night was when the boys sang their latest single ‘Lighthouse’. Amos explained: “In life, when you lose your way and you lose joy, you need a lighthouse to guide yourself back home. Sometimes you forget who your loved ones are.” Each each shared what brotherhood meant—standing up for one another and covering each other’s mistakes.

The duo’s songwriting skills were also put to the test. Each brother had to draw two words from a jar filled with slips (the audience wrote random words before the show) and compose a song on the spot using those words. Needless to say, there was much hilarity as they attempted to weave “pineapples” and “lamb” into a song.

It was a fun, laidback and most memorable night that marked a milestone for Scarlet Avenue.